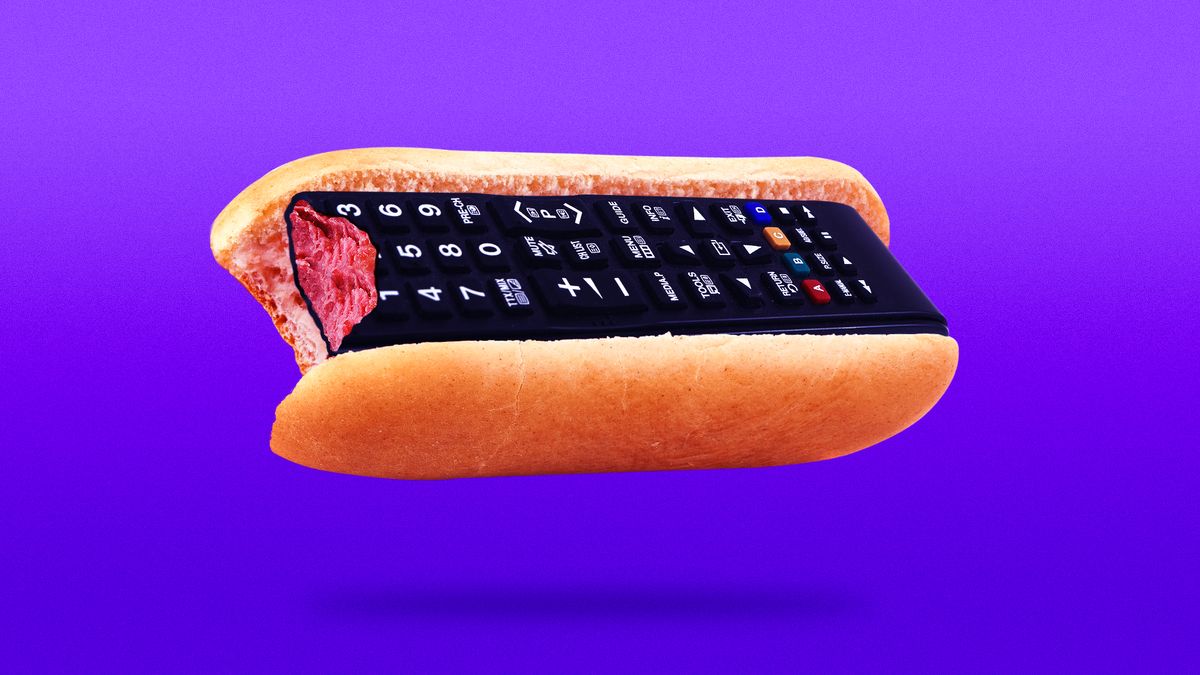 You always remember your first love. Mine was reality television.

As a kid I watched the History Channel and the Discovery Channel (when they still showed, you know, history and natural discovery — not “Swamp Monsters and Devils: What Ancient Aliens Foretold of 9/11 Conspiracy Theories”). At some point in middle school I leveled up and drifted to the outer darkness of MTV.

I watched bits and pieces of Real World: New Orleans and then the debauchery-filled Las Vegas season in 2002. I bopped between MTV, VH1, and E! in their reality heydays, eyes-wide with yelling, bleeping, and general tomfoolery. The Challenge, Flavor of Love, Making the Band, Girls Next Door, I Love New York — the worse, the better. Pure serotonin. I was in love.

My parents did not approve of any of this. I grew up in a home where the F-word was “fart” and “shut up” was unspeakable. As all families do, they relaxed their standards. By the time my youngest sister was in high school, she was practically watching The Wolf of Wall Street with my parents.

Maybe they didn’t know I was watching such trash? Or maybe they did and they didn’t want to be the disapproving Capulets to my Romeo. Either way, I was down a long, consistent chute of glorious, fabulous, terrible TV that, at this point, has been my longest-standing relationship besides the ones with my own blood relatives.

There’ve been other players in the game. I’ve dipped in and out of Survivor for 20(!) years and I’ve watched almost every season of The Bachelor and The Bachelorette. In 2005 I met my best friends nebulously called “The Housewives.” They are everywhere and nowhere. When The Real Housewives of Orange County premiered on Bravo, it was a response to Laguna Beach, The OC, and Desperate Housewives. Time capsules of low-rise jeans, sperm-shaped eyebrows, and breast augmentation as a high school graduation present.

There’s been 9 1/2 city franchises that have spun off from the success of RHOC (the half being the dangling carrot of The Real Housewives of Salt Lake City). I’ve enjoyed almost all of them, and have deeply loved several. These women have become part of my family — entering my home every week with a cacophony of screaming, laughing, and crying. Not so different from my actual family.

When the world went topsy turvy in March, people started looking for new shows to binge. Between work, taking care of kids, and an already full docket of reality shows I’m committed to, I haven’t got the time or emotional bandwidth to dive into something dark or serious. The world’s got enough of that already — no Ozark or Succession or even nightly news for me.

I will, however, take an order of whatever comfort food is on the menu. I’ve been coming back to reality shows for most of my life, and I need them now more than ever. In my ups and downs, they’ve been there — botoxed, big-haired, and beautiful — aspirational and often despisable. I love them like the crazy TV aunts they are. They are my white noise and my lullaby — something to fall asleep to when my thoughts are too loud; when I need pretty screaming women to drown them out.

If you’re feeling it all, might I recommend a stiff drink of reality TV. Here’s a guide to what’s on, along with my definitely not-proven grading system for entertainment value and petty trash value — the two axes of garbage television. Buen provecho.

For kids of the 90s, MJ was more than a basketball star, he was inevitable. As a casual sports fan but a big-time pop culture fan, The Last Dance has been top notch, high-qual Sunday night viewing. I’m living for MJ’s petty reactions to what former players and coaches say about him when producers pass him the iPad. More reality shows should do this! Innovative work. Episode 8 had excellent Space Jam content. This is the good stuff.

Final episodes 9 and 10 will air this Sunday on ESPN and all of the many many ESPNs.

Monday | The Bachelor Presents: Listen to Your Heart

We’re in a Bachelor desert with no upcoming seasons in the near future. Covid has seemingly put the kibosh on any productions this summer, which means no Bachelor in Paradise, my North Star of summer TV, and who knows what could happen with Clare Crawley’s Bachelorette season.

In the meantime, enjoy Listen to Your Heart, a made-it-up-as-they-went-along Frankenstein monster of The Bachelor and American Idol and . . . I’m not selling this very well, am I? Listen — just try it. If you’re desperate for Bachelor content, I promise you’ll be at least mildly entertained.

Out of this we have, at the minimum, three future Bachelor-extended universe stars in mean girl pageant-type Julia, messy actually-good-singer Rudi, and spazzy 21-YEAR OLD Jamie. That’s in all-caps because she should not be allowed to date on television! Her brain is not fully developed!! I feel very passionately about this. Yet hypocritically, because here I am, la-dee-da, enjoying the hell out of the baby’s drama.

The last episode airs this Monday on ABCDISNEYESPNWEWILLTAKEYOURFIRSTBORN. Synergy!!

This season of Vanderpump Rules has perhaps been its worst in eight seasons. AND YET, it’s still terribly good — where ‘terribly’ as a modifier means for real terrible. These are not good people. The plot points this season are stretched preeetty preeetty preeetty thin.

But even then, we have the old cast of characters doing their best and worst — Jax admitting to smoking too much weed and then taking adderall to lose his munchies weight. Scheana tricking one of her victims into being in her almost-X-rated music video. Katie being mean as a snake like always, and her husband Schwartz openly, drunkenly criticizing her for it at a party and yelling he’s not attracted to her!! And this is the worst season, people!

They’ve introduced newbies this season, who I’m actually enjoying more than the oldies. For me, the breakout stars are Charli and Danica; hot Charli who’s never eaten pasta (because she thinks it makes you gain weight — UM YEAH THANK YOU CHARLI) and Danica who has not one, but two restraining orders against her from former boyfriends. This is who we’re working with.

This season is coming to a close, but seasons 1 through 6 are WORTH THE BINGE. You will feel very yucky and very good about your decision. I’ve laughed harder at this godforsaken show than almost any scripted TV out there. You can’t write this stuff.

The last episode of season 8 airs this coming Tuesday on Bravo.

The final episode of Survivor season 20, ‘Winners at War’, airs tonight on CBS. The season started off really strong and has dipped a few times, but this is top-shelf reality television. In fact, I don’t even count it as trash TV — this is prestige reality — a legacy brand that has kept viewers coming back for 20 years.

I started watching Survivor again a few years ago, and I love having appointment television on Wednesday nights. When every day has felt like just another day, the only thing I’ve used to mark the passing of time has been Survivor on Wednesdays. I may go back and binge a few past seasons when this season is over just to see if I can “spot the difference” with Jeff Probst. He is a vampire, yes?

Also on Wednesdays is a new season of The Real Housewives of Beverly Hills. This season has started off really strong with the petty drama. Former voice of reason, Kyle Richards, is cracking and my queen Erika Jayne is serving. The nutso fashion on this franchise is *chef’s kiss.*

Down in the muck are the likes of 90s actresses Lisa Rinna, Denise Richards, and new addition, Garcelle Beauvais. Denise made us think she was just a regular girl last season, but now she’s reminding us that she was, in fact, married to one Charlie Sheen. If people tell you who they are, believe them.

The Real Housewives of Beverly Hills
Entertainment value: B+
Petty trash value: A-

A strange detour about me is that I have, for some biological reason I suppose, binged the entirety of a separate reality food program during each of my three pregnancies. MasterChef with baby one, The Great British Baking Show with number three, and Top Chef with number two. Ever since then, I’ve been an avid fan.

Like Survivor, you don’t have to be embarrassed about this brand of reality TV — it’s another staple of prestige reality. Top Chef has been on the air since 2006, and the thing that sets it apart is that the chefs are, like, really good. They often own a restaurant or two and many are James Beard Award winners.

This season is particularly aspirational as I’m dreaming of not preparing my own meals every. stinkin’. day. and sitting in a dimly-lit restaurant getting drunk on Diet Cokes and calories. The Top Chef judges are my very favorites of any reality-TV judges. I want Padma, Tom, and Gale to rock me to sleep and teach me how to get the right consistency of risotto. (Never make risotto for Tom.)

The Real Housewives of New York City is, for me, the crown jewel of all the Housewives franchises. These women are old. We have someone in their 60s. And despite their ages, they are effervescent, often mean-spirited, but absolutely hilarious and genuinely friends with each other — an rarity amongst these stupid shows. I cannot sing enough praises.

Both Top Chef and the Real Housewives of New York City air on Thursday nights on my Mount Olympus, Bravo, where Andy Cohen is a god.

Friday & Saturday | Choose your own adventure

When none of my trash shows are on, I will relent and watch a movie with my husband, although all I really want to watch is Summer House, a show on Bravo that just ended and that I’m currently catching up on. I slept on Summer House for too long and now I’m addicted.

It follows a group of 20-and-30-somethings who work in New York City during the week and spend summer weekends at a big cedar-shake house in the Hamptons. It channels old-school Real World with all the Millennial tropes you and I know too well, like tasteful pastels and grown men scared of commitment. You will not regret a foray into this show, and it will put you in a summer mood while we still don’t know what our own summers will look like.

Reality TV is the Wild West — you can find whatever you’re looking for. Maybe that’s the TLC frontier of Sister Wives and 90 Day Fiancé, or maybe it’s Netflix’s brand of evergreen reality dating shows, which I just can’t get into. But it’s all yours for the taking.

I can’t live too much in my head right now, I need a comfy pair of sweatpants and the TV equivalent of those sweatpants. I’m looking for comfort and I’ve been able to find it with all my best TV friends I’ve made along the way.

Ben Won’t Get A Cat