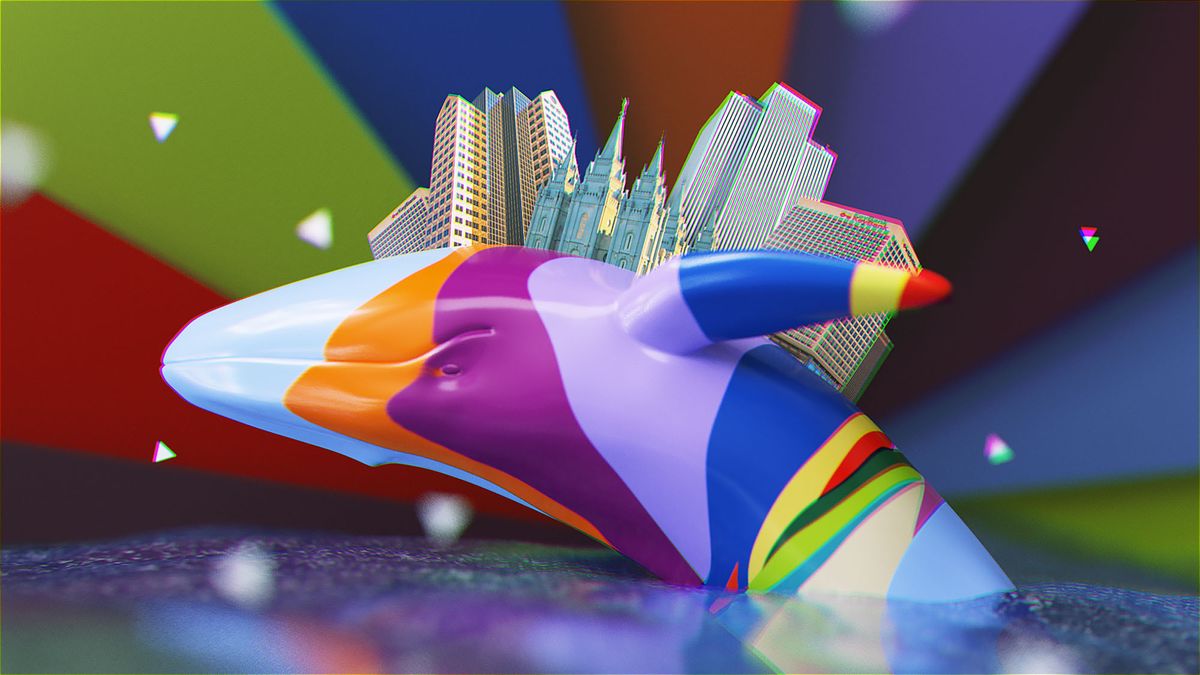 Snowflakes swirled around me and two other strangers as we stood on the sidewalk with our phones out, gaping at the roundabout on 9th and 11th. Traffic had slowed to a fixated crawl around us. In the center of the roundabout, a group of kids were excitedly chattering together, their necks craned skyward. It was like that moment in a sci-fi movie when everybody walks out of their apartments to gawk up in awe at what, unbeknownst to them, is the portend of an apocalyptic extraterrestrial event.

Each of us had drifted together from all walks of life, all corners of the city, to bear witness to 9th and 9th’s glorious and controversial newcomer: The Whale.

The Whale is a massive fiberglass and steel statue of a breaching humpback whale that was installed in the center of the roundabout at 9th and 11th on April 1st and christened on April 11th. Painted around its head, fins, and belly is a colorful mural of a mountain sunset by Mike Murdock. It’s the first mural of many, as the mural will change every three years. The Whale’s official name, and an apt one, is “Out of the Blue.”

Sculpted by local Stephen Kesler, “Out of the Blue” was created to represent the Salt Lake City neighborhood most likely to have an “In this house, we believe science is real” sign posted in the xeriscape: the 9th and 9th District. This progressive little Salt Lake haven is where the Maven District—a hub of 40 plus women-owned businesses—was born, it has one of the most seasoned yoga studios in the city, a dollop of cute coffee shops, and gelato to write home about, among other things. The idea behind The Whale is to celebrate this “community that bursts through expectations, that commands respect for nature and varying ideas and identities.”

I don’t know if being gerrymandered out of The Whale’s congressional district disqualifies me from having an opinion of The Whale that should be taken seriously, but personally, I am obsessed with The Whale. I’ve visited it twice and plan to return as often as possible. I’ve started measuring time by Before Whale (BW) and After Whale (AW). All of my future romantic rendezvous, duplicitous business dealings, and tête-à-têtes will be conducted by furtively passing along notes that say, “Meet me at The Whale at midnight.”

Not every Salt Laker, implant like me or otherwise, feels the same adoration.

Since its official “whale-come" to the neighborhood last week, local Ahabs have been lining up with their harpoons at the ready.

In a letter to the editor of the Salt Lake Tribune, Robert Barth referred to The Whale as “a tacky come-on for a honky tonk carnival,” a “blight on our historic neighborhood,” a “monstrosity,” and, in short, “schlocky.”

Art literalists complain that the statue should have depicted a species native to Utah, like a moose or a brine shrimp or a Diet Coke Mom. In response to just my tweets about The Whale, people have said:

“Last time I checked Utah is far from the ocean.”

I know the story behind the seagull and Utah, but a Humpback Whale?????”

“I understand the meaning, but couldn't it had been an animal that is actually from Utah? Celebrate welcoming people while also celebrating Utah's natural wildlife?”

I can’t wait until they hear about Utah’s NBA team, but I digress.

For many, a whale is decidedly too odd, too “out of the blue,” if you will, and anecdotally, Salt Lake City doesn’t seem like the type of city that people are rushing to “keep weird.” If anything, the general vibe since 1890 has been “We’re a peculiar people, but, like, not that peculiar.” And what’s more peculiar than a 23-foot rainbow whale breaching from a roundabout in a landlocked desert state with its fins stretched toward God like Christ the Redeemer?

The battle over The Whale’s existence is not new and it’s not just online. It’s been raging for over a year in the 9th and 9th neighborhood itself in the most 9th and 9th way possible. Drive around The Whale today, and you’ll notice a small troop of garden gnomes lined around its base, attached to it like remoras.

While today it looks like a symbiotic coexistence, the gnomes are remnants of a neighborhood turf war that drove a dividing line between how the city wants to define itself versus how the community that lives there does.

The gnomes started appearing on the roundabout soon after it was built a few years ago. During the hardest months of the pandemic, the spot evolved into something of a mulchy, wood-chipped Shire with garden gnome figurines of all sizes, shapes, genders, and colors welcoming people to The District. It even got a local nickname: “Gnome Hill.”

A report by KUER described Gnome Hill as an “organic art project curated by people in the neighborhood,” something that showcased the community’s eclectic, diverse identity. It was the neighborhood doing the creative work to define itself during a period when so much was indefinable.

The gnomes would have gotten away with owning the roundabout, too, if it weren’t for that meddling Salt Lake City Arts Council.

After a public submission process for a project to fill the space, the council commissioned Kesler to build his sculpture of a humpback whale in the roundabout, an installation that would represent the welcoming nature of and sense of belonging to be found in the 9th and 9th community.

In response, local Scott Perry wrote a letter to The Tribune decrying the choice as “ludicrous” and “insipid,” a decision made by a “bunch of suits trying to be quirky.”

Jean Lamberty, a visitor from Dallas, told ABC4, “I think it’s the dumbest thing I’ve ever heard for a statue in Salt Lake City...there’s no ocean here. A whale doesn’t belong.”

After the council’s announcement, the gnomes were in effect rendered squatters on stolen land and reportedly cleared out by the city. Team Gnome pushed back with a vengeance, filling the roundabout with even more gnomes and signs of protest that said things like “Gnome Rights” and “Oh Whale No!” At the height of the protest, a life-sized gnome wearing cheetah print boots appeared in the roundabout holding a sign saying, “Whales Belong in the Ocean.”

Some residents complained to the The Trib that there was supposed to be a survey to ask residents what art they’d like to see, but that they didn’t see it. Someone even started a Change.org petition called “Save the Gnomes of 9th & 9th!” It got just over 700 signatures.

In November, Salt Lake City Weekly wrote, “Not since the relocation of Coffee Garden has Salt Lake’s 9th and 9th neighborhood been so divided,” referring to each half of the rift as either “whale watchers” or “whale whiners.”

Ultimately, the “whale watchers” won out. The project moved forward with some residents still very unhappy about it, though the city ultimately offered an olive branch and let the gnomes stay. It makes for an even odder display in the center of 9th and 11th, but expelling them for good would have defeated the entire purpose and, truth be told, heart of the project.

Even though I’ve made The Whale my entire personality at this point, there’s something personal and endearing about 9th and 9th’s stubborn attempts to define itself against the city at large. I grew up in a rural town that has spent every moment of its existence trying not to be swallowed by a bigger fish. Identity there is both cement that was poured and hardened long before newcomers could leave a fingerprint, and an endangered thing that could be taken at any moment by urban sprawl.

It’s the West’s enduring story—a constant scramble to seize the narrative of a place, then fight tooth, claw, and garden hoe to defend it from the next guy who tries to change it.

As for the technicolored leviathan who now graces one of our fair city streets carved from the dried bed of the largest ancient lake in the Great Basin, I don’t actually think it’s as dramatic a change or as out of place as people claim it is.

The Whale’s sheer audacity and fierce individuality feel pretty 9th and 9th to me.