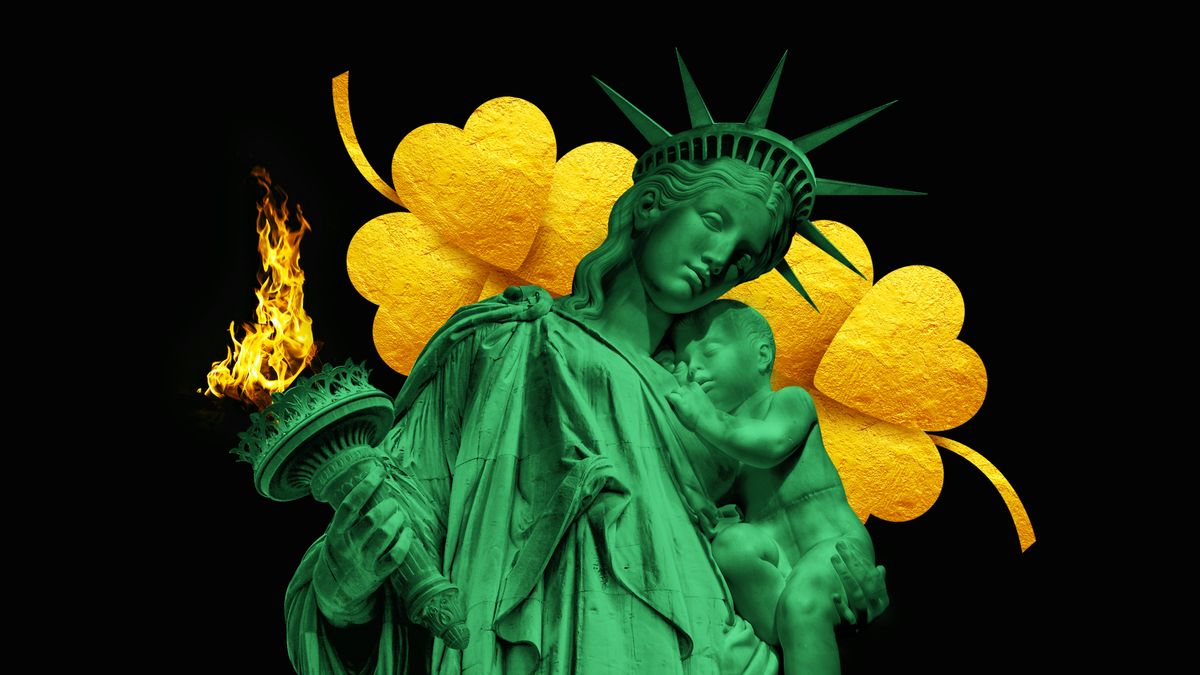 About Babies and Bad Timing

When my husband and I got married he was undocumented. Our honeymoon was spent driving cross-country from our wedding in Nashville back to Utah because he couldn’t fly. We went to a resort in Florida for a few nights, then through New Orleans, San Antonio, Austin, up through Boulder and Rocky Mountain National Park, and finally on Route 6 into Utah Valley. We made our honeymoon road trip feel like that’s how it was supposed to be — like people would choose it on their own without the constraints of not having identification.

Our first year of marriage I finished school and he took a year off to work odd jobs for cash so we could save for his green card papers. That spring he did taxes in Walmarts in Price, Roosevelt, and Vernal. He would drive out for a few days at a time — we’d pray the faulty headlights wouldn’t go out on the drive because he didn’t have a driver’s license. It would have only taken something as silly as that.

I still can’t finish that sentence.

We couldn’t afford an attorney so we did the application ourselves. We spent hours and hours pouring over immigration forums trying to figure out the paperwork. We mailed off the application just after our first anniversary, and then we waited.

In the meantime, I got a job and he was back in school. With the hope of some stability, we decided to have a baby. I know it sounds stupid. It all sounds pretty stupid. When you’re in it, you know it’s stupid. But it also sounded exciting.

We couldn’t travel to Europe or Bali, or really anywhere, but we could open our world in this other, most human way there is. We were so limited by papers and identification and legal nuances that our great newlywed adventure came in the form of a positive pregnancy test. I thought it would take six months to get pregnant — I had that in my head. It took one try. We were catapulted into doctor’s appointments and growing bigger while waiting for an immigration appointment letter to come in the mail.

Several months later the letter came; I was six months pregnant when we had the interview in Salt Lake. You know the one, or maybe you don’t — I didn’t know anything about any of this until I did. The appointment is an interview with an immigration officer who determines if your marriage is valid and green card-worthy. They ask you about where your wedding was and do you have pictures and who was there and how many siblings do you each have and what are your birthdays and so on while you sit across their desk like kids in trouble. I hoped my swollen face and belly would give us some bonus points.

My husband got his green card on St. Patrick’s Day, which was fitting. It was remarkably anticlimactic. The relief was so heavy I just felt tired. He got a social security number, a driver’s license, and a real job with a W-2 and all of the things people are supposed to have. After so long of things being weird and scary, it was strange to be living under the sun. We had gotten used to our sea legs. And when our baby girl came with her mess of black hair, the sea legs came in handy. She was a tiny, perfect adventure.

In the early years of adulthood, you think you have to do all the grownup things right away. Live on your own, rush through school, and travel as much as you can. But eventually I didn’t think that anymore. I realized it’s a long life. The anxiety of the first two years of our marriage felt like they would last forever, but they didn’t. In the end, it was two years. Two years! It feels like a blink now.

I’ve sometimes gone back and wondered if we should have waited to have kids. It wasn’t a good time by really any calculation. But after having two more chubby-cheeked kids after the first, I know there is no perfect time to have a baby. There might be more convenient timing, but babies are kind of the opposite of convenience. These beautiful disruptors will shake any stasis there is. It’s not their choice to come, yet they roar into the world like it is.

I’d like to own some of that baby energy. To enter any situation like I was destined to be there at that time, in that moment, in that way. Naked and loud and content to be breathing the air. (I assure you, I use ‘naked’ quite figuratively.)

Women know there is no such thing as perfect timing. Ask anyone who started their period in middle school while wearing white pants. The female experience is a life measured in inconvenient timing. The tides of our cycles; our constant hormonal shifts; the fact that unwanted or unplanned pregnancies can be so easy to come by — and how sometimes the most-wanted, most-planned pregnancies aren’t; the way labor starts gradually in waves; how babies come when they do and there’s no telling when; the way we are expected to manage a career and fertility, whether that includes motherhood or not.

All of this brings me to today — sitting here in my second trimester with my fourth baby, getting rounder by the second, smack dab in the middle of a pandemic. This new baby, like the first, decided to come sooner than anticipated. I was more naive and energetic when I got pregnant the first time in the midst of very different, yet equally anxious circumstances.

I cried when I found out I was pregnant this fourth time because — Hello! Look around! Birthing a human while wearing a mask is not ideal! And because I felt stupid. I felt stupid for getting pregnant during what seems to be a pretty objectively Bad Time. And even though I know there’s no such thing as a perfect time, and even though I know this pandemic won’t last forever, it felt foolish.

I thought back to getting pregnant with my first baby girl. About how it was also at a Bad Time. About how those two years of so much insecurity felt like forever. And how now I think back and thank my own foolhardiness that we had her when we did — and I have to give myself some grace that maybe part of it was my own good intuition. She came when she did — a lesson she and I will learn and relearn over our lifetimes. I have to remember how those two hard years are a blink now. We learned so much from those two years and that one perfect baby.

The other day my four-year-old — my second daughter — asked me why the days never stop, why they just keep coming. I told her because Earth keeps turning — every day we turn to face the sun and then away from it. The truth of my response fell simply at my feet.

These disorienting years will become a blink. With every rotation and revolution, every day means more and less, every circumstance more and less convenient. I’ve stopped crying about this baby and started thanking my growing body and the inconvenient convenience of new life during this good, bad time.