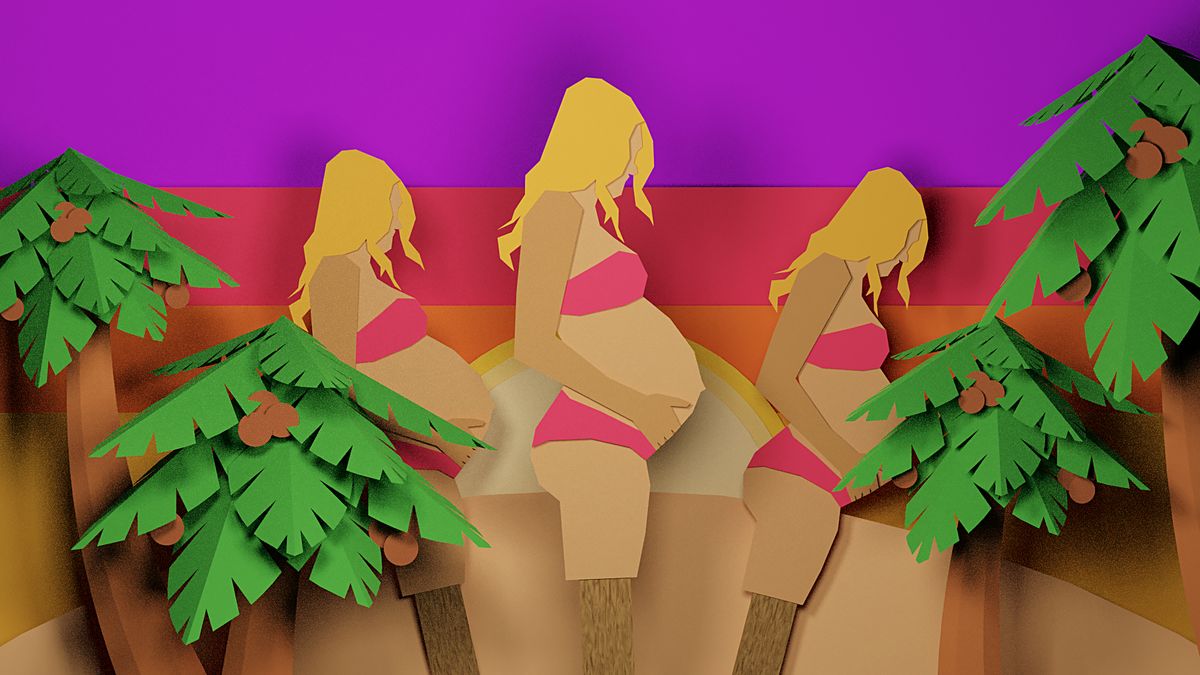 When I can’t sleep, I have a bad habit of making things worse by spiraling myself down Instagram’s rabbit-hole Explore page. It was there last winter, when I was very pregnant and things were very Covid, that I discovered—nay, explored—a pointedly unnatural phenomenon that seemed to auto-populate like spring water.

There are all these white 20-something women living on the North Shore of Hawaii and they’re all the same. And they all know each other. And they were all pregnant. All at the same time. Being pregnant myself, my feed was maternity heavy. Insomnia is a hell of a drug and I was certainly on some sort of a trip. In fact, a Hawaiian one.

My algorithmic tendencies led me there, which made it easier and easier to end up there again. There is a rosy filtered island paradise where everyone is evenly tanned, wakes up with beachy waves and looks amazing in bikinis, especially when there is a beautiful pregnant belly adjoined a long, bronzed torso.

It was at one or two in the morning that I’d find myself on island time within a tap. I was enduring a cold northeastern winter with a maternity nightgown wrapped about my legs under the sheets, but these gals didn’t need more than a handkerchief atop their perky bubs to be out the door and on a picture-perfect beach with toddlers and Instagram husbands in tow. I was living a Covid reality that informed practically every decision I made, and yet these people were evidently on a different planet.

From my many late nights on the discovery trail, I can deduce that most of these North Shore transplants appear to be from Utah and have made their way to Oahu by way of BYU–Hawaii. I’ve texted a few friends who’ve known so-and-so or saw them at x beach with y influencer while vacationing in Hawaii. For a while, they were all I could think about, but I didn’t know how to bring up my obsession in casual conversation because it was all so very online. Like explaining a meme or inside joke, I guess you just had to be there.

Part of the problem is that I’ve been looking for a better term or catchy, pithy way to describe them other than “that group of influencers in Hawaii,” but I haven’t come up with anything. It’s so niche and so peak Instagram, maybe it’s not meant to be represented with words at all, but only with filters and tiled photo squares.

These women as individuals are mostly indistinguishable to me. A symptom of ingesting The Face for ten years and also, apparently, the fact that if you’ve seen one tan, bikini-clad pregnant lady, perhaps you’ve seen ‘em all? They all have naturally highlighted hair, youthful glows, and husbands who’ve learned the Renaissance art of angles and photo editing. Which, honestly, my own husband could take a tip or two from.

And the husbands! I haven’t even spiraled about the husbands yet. If you think the wives look alike, the resemblance between the husbands is downright spooky. Shoulder-length surfer hair and wide, white smiles. Like yeah, I’ve seen Blue Crush, I get it.

I don’t follow these women’s pages—they’ve only presented themselves to me like the Room of Requirement. I’ve only found myself on Oahu through tired, squinted eyes. I’d click through the suggested pages of these women to watch their bellies swell along with my own. I was wearing my Covid uniform of a sweater and sweatpants while swiping through their colorful carousel of swimsuits. I was struggling to find a name for my unborn son, and figured I’m too old and pasty to be naming one of my kids Indi, Cru or Krew. It’s sort of comforting that Utah’s naming conventions have made their way across the great Pacific

I’m genuinely befuddled about how the economy of influencers based in Hawaii is supporting so many internal competitors. What does the market for influencers look like when there seems to be an endless demand and an endless supply to choose from? Forget The White Lotus. I would watch a limited TV series of just screen recordings of DM inboxes filled with brands reaching out to these women and then the fallout playing out in their inevitable group text. Navigating the financial and friendship implications of various spon-con? Olivia and Paula wish.

This is increasingly my problem with social media. I come down to Earth too hard and can’t stop thinking about the real-world operations side of things. How much are they getting paid for this post? Is it just a trade for goods? At what point are these influencers getting a personal assistant? How often are they getting together for those sepia-toned influencer picnics with the garden tablescapes? What happens if and when influencers decide to hang it up and . . . not influence anymore?

I got Qs, and maybe the A is that none of it is meant to be consumed on our earthly plane. Astral and otherworldly, like the type of Hawaii that is being sold on these influencers’ bill of goods—where the sun is always setting and the coastline is peachy-colored in VSCO-K3. Where you’re TikToking with all your best girlfriends and all your cycles are in sync and all your children are born with a healthy crop of blonde, blown out hair.

My curiosity is anthropological. I respect the hustle of these women because all I’m doing is beep-bopping on my laptop and don’t have the strength of will or mind to actually figure out how to create a Reel or TikTok video. I don’t have a film degree. I’m fascinated by the human capital of it all and how when America colonized Hawaii and did some really shitty things to its native population 150 years ago, it started a long-game domino effect that led to the commodification of not just Hawaii itself, but also a very small, specific cohort of women living on the North Shore, their pregnant bodies, and the triangulations of their families and friendships.

When I was learning about Manifest Destiny and leaving AIM away messages in 8th grade, how could I have anticipated how to navigate this new frontier of exploitation—a digital colonization inextricable from the physical?

The baby who was causing me all the pregnancy insomnia in the first place is now six months old. I’m still up at night because of postpartum hormonal night sweats, but now that he’s here and teething, I’ve basically lost interest in other people’s pregnancies. I don’t need Hawaii right now because summer is waning and the edges of the leaves are beginning to brown. We’re deciduous people, waxing toward change and the refreshing of timelines, feeds, and seasons.

Influence works like the meaning of aloha—a greeting or farewell. The influenced come and go, find what they need, and leave when they don’t. Like the tide coming in and going out, I found whatever it was I didn’t know I was looking for, lurked around, judged and clicked, and left like a thief in the night.

What I was being influenced to do or buy or think, I don’t know. But here I am, months later, writing this piece, still influenced and entranced by the magnetic hold those islands and that distinctively nonnative invasive species has on me. Aloha, indeed.

The Hunt for the Wasatch Treasure