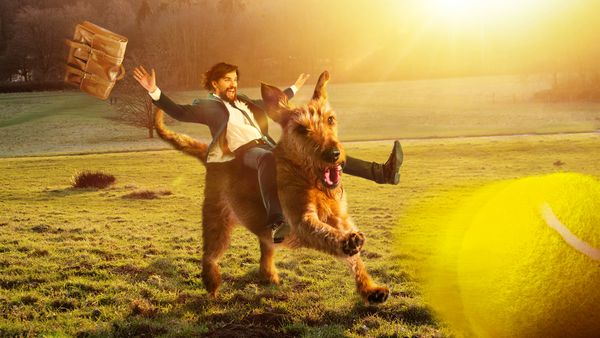 Three years ago during a particularly stressful few months with my job I got a little dog from a small rescue organization. It was probably reckless to suddenly take on the responsibility for rearing and loving a needy and traumatized puppy while feeling similarly needy and traumatized, but my entire energy at that time was a little reckless, so the drastic life decision was par for the course.

Over the next many months I coddled and trained this creature, spoiling him to a degree no human has ever been spoiled, until he finally became uniquely particular and undeniably mine. He had the same anxieties as me. He snuggled down at my feet every night when we went to bed. He craved constant companionship. He didn’t like to be touched very much.

Duncan and I immediately settled into a routine. He seemed to love routines.

I loved him. He loved me. I tried to convince myself this wasn’t just because I fed him.

Around this time an old Tinder match of mine relocated to Salt Lake City. Skylar traveled for work regularly, but when he was in town he’d join me and Duncan for our walks. We’d take turns throwing the ball for this spoiled little creature who loved to play but not to be touched—who seemed to have had a bad experience with touching before he came into my reckless life. He’d skitter away when someone tried to pet him and he’d bark at people when he saw them hug. He didn’t seem to think anyone should ever be touched.

One day just before Christmas that little puppy, now a slightly less little grown up dog, sprinted around me and Skylar, barking, as that old Tinder match and I embraced one another moments after Skylar accepted my marriage proposal in the kitchen of our one-hundred-year-old house. It had just snowed and it was dark out; nevertheless, after calling our families and sharing the news we strapped a harness and leash onto Duncan and ventured off to the same little path next to the same little stream, our happy footsteps muffled by the fresh powder.

We bickered over flowers and venues for the next few months as our baby boy yelped at us and scratched at the door, reminding us it was time to shut our laptops and take him on his walk.

We’d leave the wedding planning and stroll, talking about our future, occasionally resenting this unrelenting chore, but usually not giving it much more thought than that. We had, after all, signed up for this.

Skylar and I got married last fall. A friend of ours had a little tuxedo made for Duncan. He posed for wedding photos with us just before the ceremony. Then another friend drove him to our house and left him inside for the day. It would be easier to have a wedding without needing to monitor an anxious little dog.

When we got home later that day Duncan picked up a toy and went and stood by the door. Tipsy from the mimosas we tastefully chugged that morning, we stumbled through the same walk on the same little path next to the same little stream where we had talked about our future. To us, this was the most important day of our lives. To him, this was a perfectly fine day for a perfectly fine walk—just like every day before it and every day since.

Over the next few months we got busy. My stressful job in my law firm and Skylar’s heavy workload in his second year of medical school consumed us. Our house became more and more cluttered as cleaning and organizing took a back seat to whatever else. We stopped taking Duncan on his daily walks together. It was more efficient to take turns. As much as I loved this spoiled little creature, I welcomed days when it wasn’t my turn to take him. One less task to make time for. One less chore to squeeze in.

Suddenly it was winter. Skylar and I were anticipating our turns even less enthusiastically. I shivered every other day as I watched this excited small dog pounce through snow—my hands stuffed inside my pockets, my jaw shaking.

“Ok, buddy. Have you gotten your wiggles out yet?” I’d ask him as he dug through a snowbank looking for a ball I had just tossed for him.

Then I’d guide him home, even though he would have loved to wander much longer.

“Back already?” Skylar would say, looking up from his laptop when we walked through the door.

“You can take him on an extra-long walk tomorrow, Judge Judy,” I’d respond, tossing a leash into a champagne bucket we had repurposed for dog toy storage.

We did this, week after week. Week after exhausting week. The pace of our lives accelerating. The mess in our house growing messier. A little anxious dog becoming more annoyed with the decreasing attention.

And then things changed.

There was a disease. It was like the flu but not like the flu. Worse than the flu, really. Deadly, sometimes. Highly contagious, probably. We weren’t supposed to leave our houses.

My husband piled his school books and other materials onto the kitchen table in the next room over. We started working, fifteen feet apart, a little dog who doesn’t like to be touched sprinting back and forth between us all day long, thrilled at the now-constant companionship.

Dogs don't know there's a pandemic. They don't know we're supposed to be panicking. They only see that our accelerating lives don't seem so accelerated anymore.

“That's a  . . . mighty loud keyboard you got there.” Skylar observed on the very first day of quarantine.

“I'm surprised you can hear it over your own voice volume when you talk into the phone.” I responded.

The pits in our stomachs grew in those first weeks as we resented the disruption to our routines and feared that life wouldn’t become normal again. “What if this is just how things are always going to be now?” I asked Skylar in a near panic. “I guess we’ll spend less on gas, then,” he responded, not worrying nearly as much as I did and casually absorbing my nerves so they suddenly seemed manageable, just like he always does.

We started finding things to do around the house—distractions, hobbies. We cleaned and organized and did the other chores we had let take a backseat to whatever else over the past few months.

The alternating dog walking schedule broke weeks ago. It didn’t make sense for only one of us to take him when all of us could use the fresh air and neighborhood stroll. The chore became a treat—something to look forward to. We even stopped walking on the same little path next to the same little stream. We ventured out through our neighborhood, looking at cozy houses and empty streets, now with budding flowers and pollen.

We started walking, hand-in-hand, while a bouncy little dog tugged on a leash, physically begging us to go faster.

We don’t feel any urgency. No real reason to pick up the pace. No stressful work and reckless decisions waiting for us in a cluttered home. At least, not as stressful and reckless and cluttered as it all was a few months ago.

Instead, we walk, with time to breathe, time to pounce and bounce and bite at leaves. Time to collapse under shade trees. Time to laugh at landscaping decisions we don’t understand and gasp in envy at those we wish we could recreate. Time to see what we didn’t make time to see before.

I wonder if they, too, have recently felt jolted into realizing how perfect a reckless decision can later seem once you’ve been gifted an unsettling chance to breathe.

Writer of itjustgetsstranger.com and a lot of embarrassing journals in the 90s.

Why Tho Podcast: Toilet Paper Laced With CBD

Why Tho Podcast: The King Stays The King

Why Tho Podcast: How Big Is Your PHD?

Why Tho Podcast: Pickup Or Sedan?