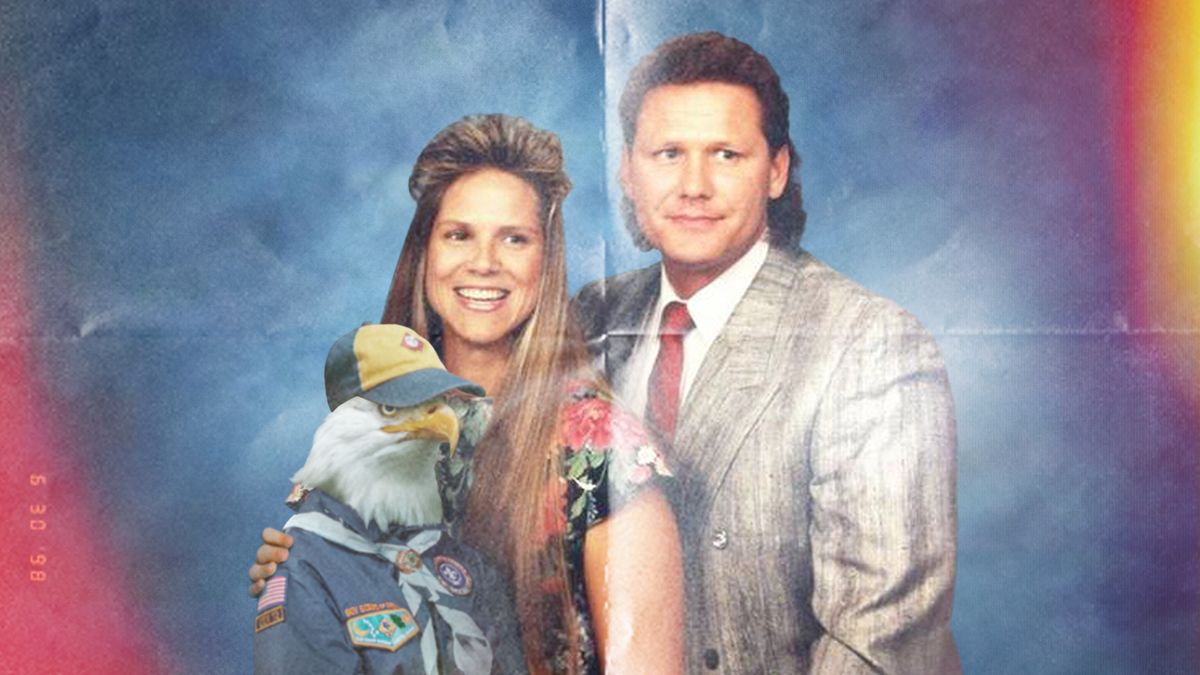 Just before my 8th birthday I was shoved into the neighbor lady’s house down at the end of the street for my first Cub Scout meeting. My friends were there, all boys around my age in half-tucked-in dark blue buttoned-up shirts adorned with patches that looked like sloppily-sewn postage stamps.

Terry Holstrom had been assigned by local church leaders to babysit us once a week by having us sit in a circle on the floor and take turns reading a 500-page Cub Scout manual made from the same paper they used in phone books. She’d crouch down in her 90s mom jeans, periodically screaming at her children in the next room to stop throwing toys.

“Today we’re going to . . . uh . . .” Terry muttered as she flipped through her very stiff book that looked like it had never experienced the caress of human hands, “let’s see, ‘learn some patriotic songs by turning household items into percussion instruments’ . . . no, let’s not do that . . .”

Terry clearly never intended for her life to come to this. She hadn’t planned to spend her late 30s coaching our neighborhood’s off-brand cast of Little Rascals on survival-adjacent skill development. But she had gathered for the same reason the rest of us had: because that’s just what we did in our very Mormon early-90s Utah neighborhood. Boys became Cub Scouts at 8, Boy Scouts at 12, and Eagle Scouts by absolutely no later than 16 if they wanted to be allowed to drive.

By the time I turned 12 scouting was so much a part of my life that, although I didn’t enjoy a single aspect of it, it accounted for 75% of my personality. For me and my friends, life revolved around scouting events and troop meetings. And because our scouting units were organized and run by our church, to us scouting and religion were one and the same. Scout camps began with prayer and were peppered with regular scripture-based fireside chats. A portion of our Sunday worship service included a flustered youth leader fumbling through a stack of BSA forms and yelling at us about how we were so behind on earning our geology merit badges.

A few times each summer we were stuffed into 15-seater vans that were driven by a handful of neighborhood dads who had sinned in a prior life. We would be hauled into the mountains to spend five days getting thrown into lakes dotted with icebergs and being handed weapons of war so we could collect our hypothermia and murder badges. My own dad would often get roped into these camping trips, earning himself entrance into a thousand heavens for successfully resisting the urge to kill the group of teenage boys in his care.

During the camping trips my best friend Sam and I would routinely disappear to go sit on secluded cliff edges. We’d try to figure out how much longer to the second we would be stuck camping. “So, assuming we’re leaving by 1:00 on Saturday, we only have 79 hours, 21 minutes, and 14 seconds left.”

If the length of time sounded daunting enough, we’d shift the conversation to theorizing about how injured we’d have to be to get immediately sent home, but without becoming so hurt that we wouldn’t be able to go outside and play that same afternoon.

I understood pretty quickly that achieving the final status for Boy Scouts, the illustrious title of “Eagle,” was probably my best exit strategy from this living nightmare. Becoming an Eagle was really the end game. It’s true that even after getting my Eagle I would still be required to attend scouting activities, but more as an empathetic observer and less as a helpless victim. No one would hound me to learn how to tie a square knot or identify the mating call of a peacock, or whatever the hell.

“The faster you can get this done the sooner it will all be over,” I recall my dad telling me after I had complained about a two-inch sliver that had snaked its way through my entire tiny palm during a “woodworking activity” in which we had built a fence in Gary Simpson’s yard that afternoon.

Rosy-cheeked and jovial, Gary Simpson was one of our several Scout leaders during this period. He had one of those houses where you had to shuffle through a few feet of dirty laundry that had collected behind the side door to get into the den where each of our weekly meetings were held. “Don’t mind the mess!” he’d shout over the sounds of his children playfully beating the shit out of each other in the basement.

I typically dreaded Wednesday afternoons at the Simpsons, apart from a four-week stretch in which Sam and I clocked and tracked with great interest a large piece of ham we had spotted under the dining room table. “It’s still there!” we’d whisper as we trudged through a pile of damp underwear, like we were on a mission for National Geographic to track a colony of capybara in the Amazon. After a month the ham mysteriously disappeared. We’ve spent three full decades since speculating on its whereabouts.

In any event, with an end goal in mind, I began vociferously plowing my way through the Boy Scout book, earning merit badges as fast as my mother could learn the skill, coach me, and then sew them onto my sash, which Sam and I periodically used to pretend we were participants in the Miss America pageant. I probably don’t have to say this, but Sam and I share a sexual orientation.

To earn my Eagle I would have to amass an arbitrary number of badges and then follow them up with some sort of grand finale service project that involved the entire troop. I was 13 when I planned it. I have no idea how I came up with the idea; I’m certain, looking back, it was fed to me by a grownup.

“We’re raising money to make school kits for Africa,” I remember vaguely telling a man who had just come to the door after Sam and I knocked on it. Whiffs of cheap imitation maple syrup and the sounds of a loudly-televised baseball game hit us on the front porch as we made our pitch to this silent neighbor standing in his entryway. We didn’t know who lived in this house. We had assigned routes to the other 13-year-old boys in the neighborhood to go home-by-home asking for cash so we could buy a bunch of shit from a dollar store to ship at random to the world’s second largest continent.

The man who answered the door wasn’t wearing a shirt and he had what appeared to be a very large glob of peanut butter caked onto the side of his sagging belly. I stared at it, wondering how it got there and how long it would remain as the good Samaritan fished two five-dollar-bills out of his wallet without asking any questions, which we couldn’t have answered anyway.

The very next Friday I went off to bed, leaving my exhausted mother at a sewing machine where she stayed up all night making a hundred or so durable green backpacks. The next morning the troop gathered in our backyard to help stuff small chalkboards and crayons into each of these bags, all supplies I have no memory being involved in gathering.

The bags disappeared shortly thereafter, presumably dumped onto some humanitarian organization that would then figure out how to fully execute our white saviorism. My parents and I filled out some forms and a few months later a small ceremony called “Court of Honor” was organized so I could have BSA’s highest distinction publicly bestowed on me.

I had been to a number of these already for other kids in the neighborhood a year or two older than I was. They were all the same. We’d gather in a Mormon chapel. There’d be an opening hymn and prayer. The bishop conducting this service would then invite all Eagle Scouts to come sit in the “Eagles' Nest” (read: the choir seats behind the pulpit). A handful of neighborhood dads and high school kids who couldn’t believe they were still doing this crap would reluctantly meander to the stage to reap what is really the only tangible “reward” for the great achievement. Fathers would stand with their sons on the stage, receiving their due credit for all their support. The tired moms would sit on the front row with camcorders.

Then a man no one knew would perch himself at the front of the room with a live eagle tied to his wrist and bird poop dripping down his tattered scouting shirt. He’d recite some statistics we had no way of fact-checking about the creature and then he’d tell us he hoped our dreams would soar as high as eagles while raising his arm in order to prompt the bird to extend its clipped wings. We’d all gasp in unison.

My own Court of Honor was no different. Another neighborhood boy finished his Eagle requirements near the same time so our ceremonies were combined. Extended family members—the sort who gave Bibles with our names embossed in gold on the front cover as congratulatory presents—sat beaming in the congregation seats as the eagle tamer finished his motivational speech.

I stood on the stage with my dad, making faces at my friends and rolling my eyes at the ceremony of it all. “If you’re old enough to be honored in church, you’re old enough to behave yourself while everyone is looking at you!” my mother would scold me afterward while dragging me out of the chapel by firmly pinching my right ear that still has little feeling to this day.

That night I took off my Boy Scout uniform, almost never to be worn again. I hung my sash covered in merit badges I hardly earned, careful not to crease it as I was certain I might need to present it to some future employer who would need proof of the qualifications listed on my resume, and I climbed into bed.

Last week my husband and I attempted to go camping. At sundown he tossed a rope to me and asked me to tie a secure knot for some reason or another. After I failed several times he sighed and furrowed his brow, “I thought you were an Eagle Scout?”

Suddenly I pictured a very tired middle-aged woman with a full-time job and four children slouched over a kitchen table lovingly highlighting a Boy Scout manual at 11:00 on a weeknight. It’s 1997. She has spent the last five years mastering a set of skills well enough to talk her distracted son through them so he could barely clear the minimum requirements she was never expected to meet as a teenager when she was instead forced into home ec classes in the 60s. She’s convinced this all matters, or at least that it matters to him. Until the date of this article, she’ll never get the thank you she deserves.

I shrugged at my husband’s implied accusation amid our barren campsite.

“We really should have brought my mother.”

About Babies and Bad Timing