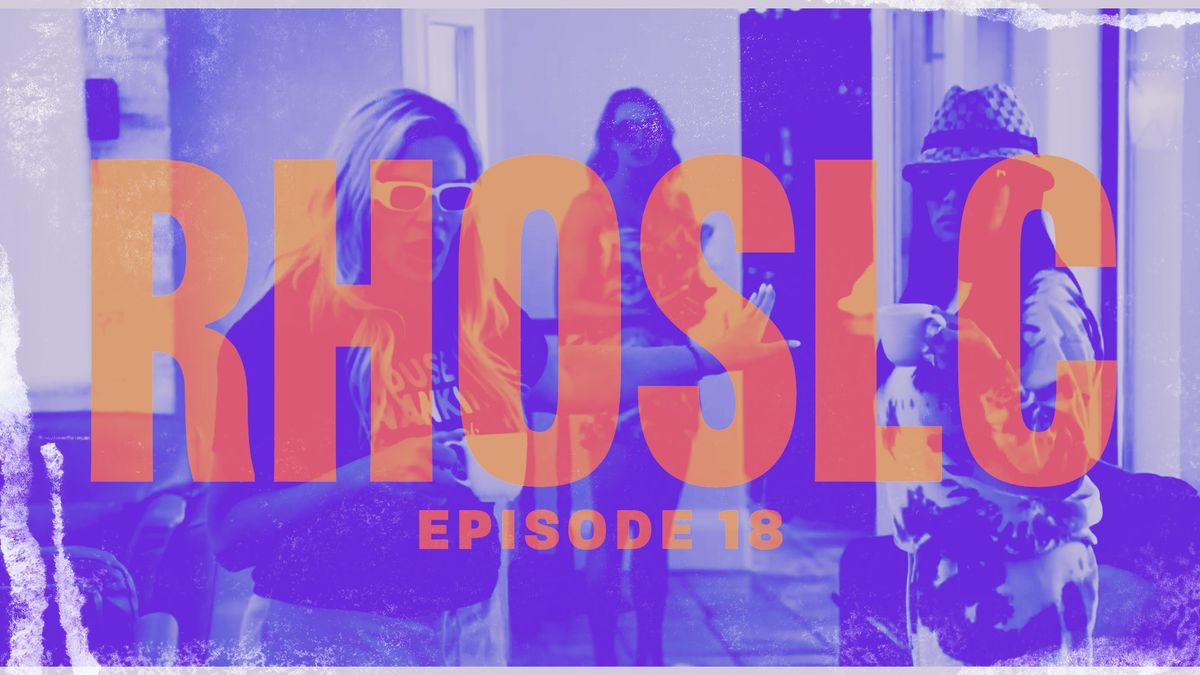 Episode 45 of this season of RHOSLC drops us right back into the screaming match between Meredith and Jen:

Because she is The Normal One, Heather breaks it down:

Jen is mad at Meredith for hiring a private investigator to “research” her. Meredith, with an accent that is drifting into strange territory, says the PI was 90 percent sure the person sending threatening messages to her family was Jen:

Meredith is being cryptic, as always. In a flashback from Vail, Whitney asks Meredith if Jen was hooking up with the guy Meredith was with when she and Seth were separated—

“I heard that she actually was the one that had a relationship . . .”

Reaching the logical conclusion that your coworker is an FBI informant because they wouldn’t road trip with you on a party bus is top-shelf Housewifery. Meredith handles the accusation well:

Meanwhile, Whitney convinces Meredith to go back outside to the women and tell them why she wasn’t on the van. She’s realllllly into the van thing, and—it’s clear to me now, and I should have already known this instinctively—Whitney is just a road trip person. You know it’s true because she’s also into four wheelers and crystals.

On her like fifth storming-in after storming-out, Meredith attempts to hold court with the ladies:

Let’s not forget that these women have been drinking all the live long day and they need to go night night. In a confessional Meredith says, “I’m so flattered that these women think I’m more powerful than the FBI, but I think they could find Jennifer Shah without my help.”

As she is wont to do, Jen yells at Jennie and Lisa and makes everything about herself:

Meredith retreats to her bedroom to call her son Brooks:

Thank Andy Cohen for subtitles because how am I supposed to decipher a Marks-to-Marks phone call between Meredith’s drunkcent and vocal-fried frequencies only whales can hear:

Meredith says she’s “like, sleeping with the enemy tonight.” Brooks feels “so bad for all the husbands, too,” and honestly, that’s the patriarchy talking, sis. We never feel bad for the husbands.

Back at the Dinner Table of Horrors™, Bad Weather defends Lisa and Jennie:

And Whitney trades in her detective costume for QAnon rally merch:

While Lisa tries to make us believe the Housewives’ Big Lie:

Whitney is drifting further into the murky #bossbabe reaches of relevance where the worlds of crystals, four-wheeling, million-dollar loans for a rebrand, MLMs, conspiracy theories, and wall art word decor intersect:

Back upstairs, Meredith concludes her phone call with Brooks on an ominous note, which sounds like she wants to quit the show without saying she’s going to quit the show:

Enter Jen, who was eavesdropping. Jen and Meredith have a normal(ish) conversation where Meredith tells Jen she had no clue the FBI was going to arrest her and that she didn’t want to ride on the bus because she didn’t want to “subject herself . . .”

See, it wasn’t that hard, Meredith. I don’t know if it’s because of her legal training (remember how Meredith went to law school?) or because she has that annoying cool girl thing where she doesn’t want to be too accessible, but she could solve a lot of problems for herself by being less elliptical.

Jen breaks down and has another mini-panic attack. This person should not be on television. Meredith consoles her and reminds us that she’s a good person, which is why she should not be on television either. Mary says: “If we’re gonna be friends, at some point, everyone has to come together and get along, and I feel like this is a start. It’s gonna take a minute for her to forgive Jen:”

We wrap up this hellish night with an even more hellish reminder from Jen:

The next morning erupts in chaos as Meredith storms around the house yelling at everyone like the Beast screaming at anthropomorphic furniture:

Mrs. Potts, Lumiere, and Cogsworth hide under the covers:

Meredith is screaming (she’s so scary) because apparently Lisa told her after the cameras were down the previous night that the women were questioning why she couldn’t ride on the van to Vail. The insinuation is that her father’s memorial service was made up.

For one, I thought we dropped the van thing?? Two, can we get someone on, like, a cell phone to capture the overnight drama? Is that too much to ask of our reality shows? Heather, Jen, and Whitney overhear Meredith losing her pink-pajama’d shit at Lisa and are shook:

Meredith tells Lisa, “you’ve been hostile towards me and it’s making me angry.” In a confessional Lisa says, “I’m having her take out her microaggressions on me, and I have hostility?” Microaggression is definitely used incorrectly here—Meredith straight up does not like Lisa anymore and is being plain aggressive about it at this point.

Heather and Jen, who’ve been doing recon, run away when they hear Lisa coming:

Heather tells the rest of the ladies what they overheard—that Meredith is furious they were speculating that she lied about her dad’s memorial. Jennie says, “It was brought up, but I don’t think we said it was fake. We were like, ‘Is it true?’” Let it be known: that is the same thing.

Mary is not pleased that Jennie is speaking so she says she doesn’t matter. (Irony.) Jennie is offended by this. Meredith reemerges like a disappointed teacher addressing her classroom:

They agree to move forward as best they can and try to have fun on their day of slot canyon adventuring.

The ladies return to the villa late and it’s up to Whitney and Jen to rally the troops for a night of homebound debauchery:

The ladies are getting ready and Jen says, “I’m not going to Zion National Park without glam.” Something nobody has ever said before.

Meredith is in a great mood after the day’s serotonin boost and vitamin D. After everyone has already eaten their takeout dinner, Jen appears as the visual representation of what it looks like to flush money down the toilet:

Mary apologizes to Jennie for telling her that she didn’t matter. Jennie reveals that she had to go to anger management because she was “throwing shit at my husband:”

Like, definitely don’t beat up your partner, but then also don’t admit to it in jest on national television. Jennie accepts Mary’s apology and everyone toasts before heading down to the aforementioned “Club Zion,” which is “in the basement.” Downstairs there is a sad stripper pole and track lighting. Sad stripper poles in basements are the eighth cast member on this show.

Lots more “whooooo!”ing ensues and although it looks very lame, they are having fun and that’s what’s been missing from this season of RHOSLC. We need our Housewives to enjoy being together once in a while to keep up the facade Lisa keeps trying to sell us: that they’re actually friends.

They take the party outside to the pool where Whitney has gotten creative with her choice of wine glass:

The next morning, evidence of their good time is strewn about the villa. One by one the ladies make their way to the kitchen, each looking more disheveled than the last:

Lisa offers to share her hangover breakfast with the group:

And on that sweet note, we conclude this, the 67th episode of RHOSLC. The sweetness won’t last for long as next week’s trailer foretells a falling out between Lisa and Meredith that’s been a season in the making. May this image live in your heads until Sunday:

Until then, don’t miss Meg and Emily on Hive Mind’s weekly RHOSLC recap from The Beehive.

The Jazz Are Hurting—and Trade Talks Are Heating Up