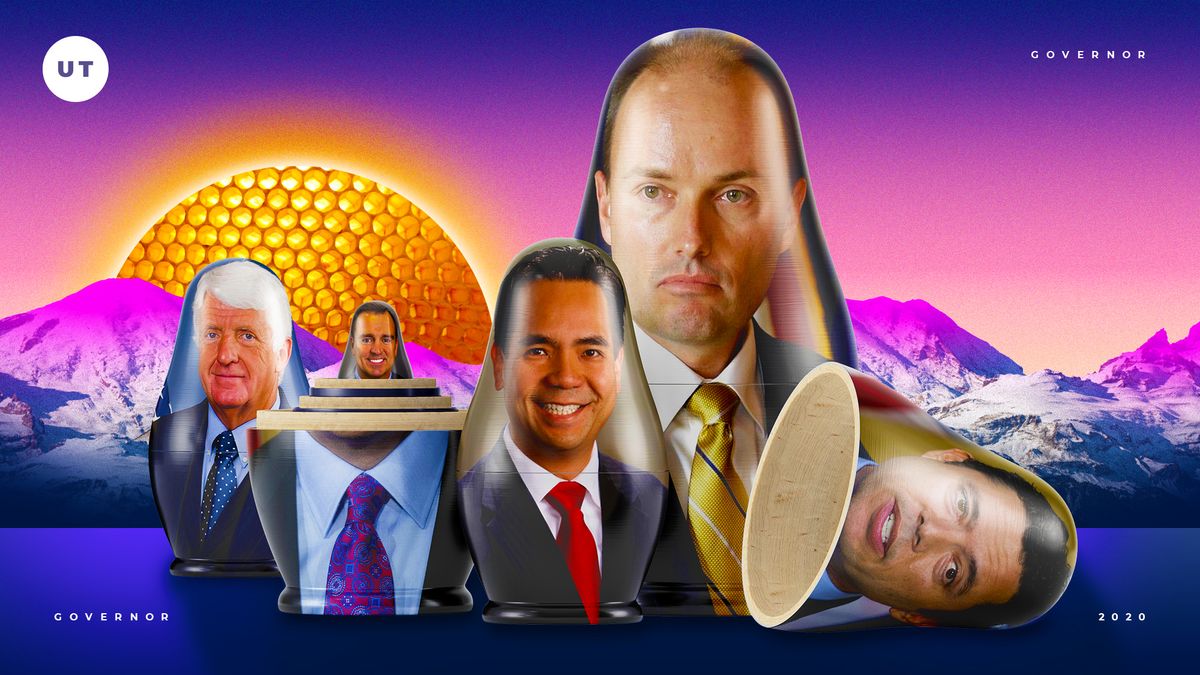 Welcome to a journey into the underbelly of Utah politics. Don't panic, we'll get through this together. You, dear reader, have stumbled upon the first piece in an ongoing series delving into the upcoming race to decide Utah's next governor. I've been asked (by myself) to compile a pros and cons list for each of the five potential candidates who registered in a recent poll. In the second installment of this series, I will submit the names of five Utahns who haven't shown up in any sort of poll but are worth consideration. The series will go on and on until I no longer find it amusing, or until I feel compelled to write Garth Brooks another 3,000 word love letter.

Let's begin at the beginning.

In November 2004, with Jason Chaffetz as his campaign manager and Utah County Commissioner Gary Herbert as his running mate, Jon Huntsman Jr. was elected governor of Utah. The three Nephites of Utah politics have been at the center of power in our beloved Deseret from that point forward.

Huntsman served a full term as governor with sky-high approval ratings, got re-elected in a landslide, and then quickly resigned once President Obama appointed him Ambassador to China. He also endorsed the late Sen. John McCain over his rival Mitt Romney; delivered the nominating speech for Sarah Palin at the 2008 Republican Convention; resigned his China post to run for president against his rival Mitt Romney; lost to his rival Mitt Romney; co-founded something called No Labels; contemplated running for U.S. Senate in Utah to keep his rival Mitt Romney out of power; and then, unlike his rival Mitt Romney, got a job in the Trump administration. Basically, we've witnessed the most boring political rivalry in recorded history. We should organize a contest to see which one of these machismos can chug the most Martinelli's sparkling apple juice without messing up their hair.

Chaffetz became the first member of Congress to represent both a congressional district (UT-3) and a foreign city (Benghazi, Libya). He then resigned halfway through a two-year term to spend more time with his Utah-based family in New York City at Fox News.

The next contest for Utah governor could bring the Huntsman-Herbert-Chaffetz era to an end, or see its continuation for many years to come. A recent poll commissioned by The Salt Lake Tribune and the Hinckley Institute of Politics showed the early contenders in the upcoming 2020 race:

It's five guys without burgers and fries. Let's put them in the deep fryer and see how they handle the heat.

Coming in at second place behind "other/don't know," Chaffetz is leading the rest of the pack in this poll. Currently a contributor at Fox News, Chaffetz told the Salt Lake Tribune that he was a "definite maybe" when it came to entering the race. No two words better describe his political career. In fact, it's the perfect campaign slogan: "Chaffetz 2020: A Definite Maybe"

The Fairview Farmer has risen to the upper-echelon of Utah politics by sheer force of personality, moving public speeches, leading on controversial issues (i.e., Operation Rio Grande), and running a Utah Jazz fan account on Twitter. The Salt Lake Tribune published an in-depth profile on Lt. Gov. Cox a while back that's still worth reading, and there's a recent interview with Cox on a podcast outside The Beehive network you may want to check out.

No one gets handed the governorship, and these five burgerless guys featured in this one poll will not be the only contenders. We should expect serious candidates to emerge who no one is talking about. But as it stands today, nevermind this poll showing results based on name ID, Spencer Cox is the frontrunner.

Sean Reyes is Utah's 21st Attorney General and the first ethnic minority to hold that office. When this poll, which I've now devoted my life to, was released, a campaign advisor for Reyes said, "We don't give a flip about a Salt Lake Tribune poll." Now this has all the makings of a perfect political quote: unwarranted hostility, refusing to acknowledge being tied for third, and Utah's favorite euphemism, "flip."

Could Sean Reyes be Utah's next governor? I have no flippin' idea. He might just flip around later and pull this thing off. Just don't ever show him a Salt Lake Tribune poll, or he'll tell you to go flip yourself.

Rob Bishop has been serving in the U.S. House of Representatives on behalf of Utah's 1st congressional district since 2003. He's currently the chairman of the House Natural Resources Committee. Bishop has been involved in Utah politics for a long time, having served as the state's majority leader, Speaker of the Utah House, and the two-time chair of the state Republican Party. He spent 28 years as a Utah high school history teacher before turning to politics full-time.

Greg Hughes is the current Speaker of the Utah House. The Deseret News ran a feature on Hughes in early 2017 titled "Greg Hughes might be the most powerful man in Utah politics, if he could just stay out of trouble." They compared him to Donald Trump, showed pictures of him boxing, and talked about his expensive suits and shirts that he has monogrammed with the letters LB, which stands for "Lucky Bastard," a nickname he gave himself.

Hughes is stepping down as speaker at the end of the year. This guy has all the energy, talent, and connections to be the next governor of Utah. He's also in the middle of a lot of controversial headlines and investigations.

That's my take on the five guys without burgers and fries. Now, who should be the next governor of Utah? Forget the polls, the folks with name recognition, political parties, and the current slate of contenders. If we can pick any Utahn in 2020, and we can, who should we pick? That will be the focus of the second installment in this series. If you'd like to make a suggestion, please email me at clint@thebeehive.com.