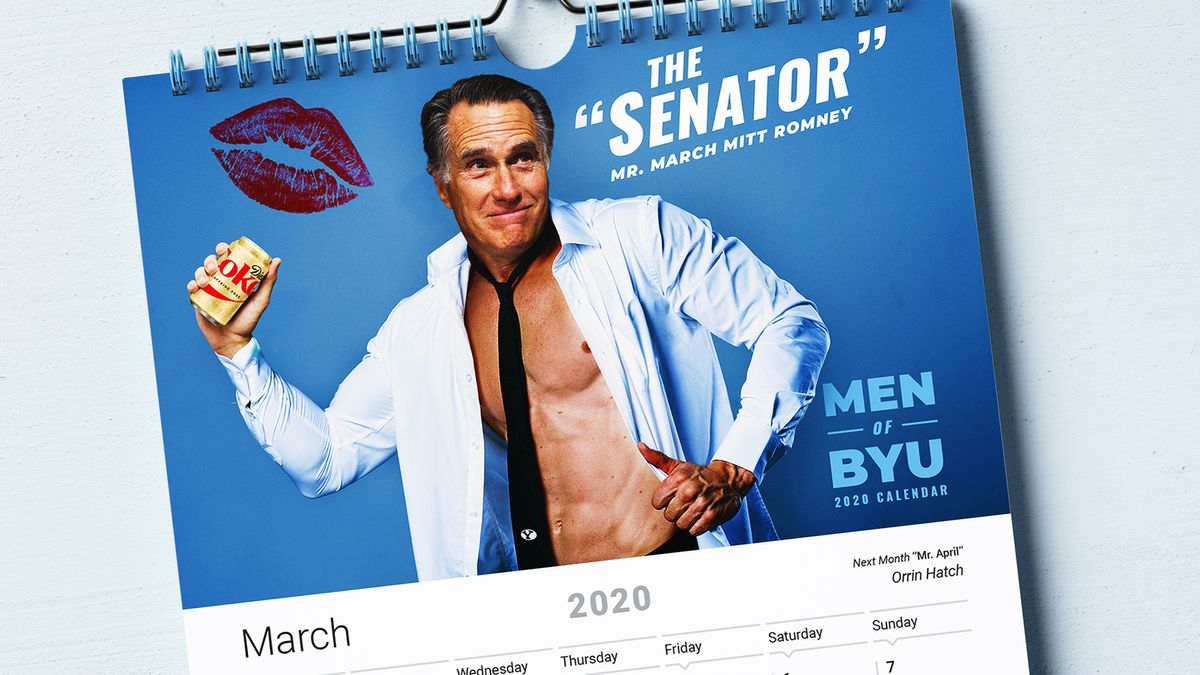 I’ve been thinking a lot about BYU dating lately, which is strange given a) I am a decade removed from it and b) there are about one billion more pressing issues happening in the world right now. But as I am discovering, it’s a trauma that will linger. A white dude in a Y hat or a whiff of mint brownies and I am transported back to the most insecure years of my life.

Dating at BYU is a soul-crushing ordeal, and it’s all Mitt and Ann Romney’s fault.

I say this having zero personal knowledge of either Mitt or Ann, so don’t get all offended if they’re your cousins. I merely mean to use them as the metaphorical first couple of Mormonism, who exemplify the bar I strove fruitlessly for while attending Brigham Young University. Let me paint the picture –

It’s a Friday night in Provo and I am 18 years old. My dormmates and I are headed to a dance party at the “Hollywood House,” where the line to get in snakes halfway down 800 North. We finally make it to the entrance and are greeted by five handsome twenty-something boys collecting canned goods to donate to the countries where they served their missions.

As I hand a can of refried beans to one of them, my price of entry, our eyes lock and the world stops. Clean-cut, classically handsome, with a twinkle in his eye and a million dollar smile – I know who this boy is, for I have seen his face on posters at the Wilk. He is Kyler Christensen (that’s a pseudonym),  the President of BYUSA.

In an instant, I envision our future. He will ask me out, we will date for a long time like 6 months, get married, then go away for his internship at McKinsey. It sucks I’ll have to cut my own college short but like, it’s McKinsey! We will procreate six strapping sons, whom I will primarily raise because he’ll be so busy as CEO.

That’s my expectation, of course. The reality is that he takes my can with the same off-handed grin he’s given every other girl who’s fallen in love with him that night, and my friends and I are shuffled inside.

I don’t see Kyler for the rest of the night, but I think about him nonstop. I marvel at what a catch he must be to not only be so socially active, but use his social aspirations for charity! It dawns on me that this is the reason you come to BYU, because it may be the only place on earth where this type of boy exists.

I dance the night away to clean versions of rap songs, leaving sweaty and having met no one. Sensing its futility, I attempt to bury my Kyler crush, but instead it festers into a full-blown complex: my destiny at BYU is to become Ann enough to land myself a Mitt.

There was just one problem with this plan: I am not Ann. By this, I mean I am not poised or sweet and do not own pearls–not even fake ones.

I spent my college years in BYU’s advertising program with a bunch of weirdos. I’m aware that by now this program has become very hip, full of guys with flood pants and girls with beanies halfway off their heads, but when I was there it was the island of misfit toys.

And yet, despite many clear signs I was not, nor was ever going to really be Ann, something told me that when it came to dating, I had to at least fake it.

I had to have well-cared-for blond hair. I had to be neat and smiley. I should maybe consider switching to broadcast journalism?

I made myself miserable trying to develop an Ann alter-ego, convinced it was somehow my birthright to marry a boy who was at that moment giving a presentation in the Tanner Building.

Why did I think I deserved this Prince Romney, you ask? I cannot say. There was nothing special about me, save for the fact that I had gotten into BYU – which, come to think of it, I had done by crafting a persona of specialness.

Extracurriculars, leadership experience, volunteer work – these were the hallmarks of over-acheiver-ism that were my ticket into Provo’s most illustrious college. My life up until that point had been a series of collected gold stars, so is it any wonder that in order to get married I applied the only method I knew?

I perceived dating as a beauty pageant, where my chance of winning would be determined not through compatibility with another human being, but by my own talent, likeability, and body in a swimsuit. I remember my mom repeatedly saying, it only takes one! But this did not make sense. Dating felt so public to me, like the only way of snagging “the one” was to impress the highest quantity of male judges.

As my freshman year turned to sophomore, to junior, with no marriage prospects in sight, my dating complex continued to fester – a strange mix of entitlement and insecurity that drove me to pine after BYU’s many Mitts but never go for them in real life because I was convinced they were out of my league.

I kept tabs on who they dated via Facebook. I resented their easy confidence and failure to ask for my number after we flirted on the 5th floor. In time, I came to hate these boys I loved.

Was I blameless in this system? I was not.

I think back to blind dates I barely gave a chance because like what even was his life plan? I think of the guy I dated for three months but could not bring myself to call my boyfriend, because what if I met someone else?

My search for Mitt turned me into a monster, but I did not know how to let go of it. I’d been on the quest since age 14, when, in the semi-annual marriage lesson in Young Women’s, we would make lists of the qualities we wanted in a future partner: Righteous, Good-looking, Hard worker, Returned missionary.

I do not envy BYU boys for having this proverbial Mitt as their bar. I can’t imagine the pressure to pick a life course at age 22 that would make it possible to provide for six children (plus a 3 year break to be mission president!). I am sure there are BYU girls who care much too much about foreign-speaking missions or having been the AP, or date you while keeping one eye open (hi!).

It makes me sad to think of all the talented male high school teachers or psychologists or social workers BYU might produce were it not for that damned accounting program. And yet, were the boys told things like, if you don’t get married now, maybe you’re just waiting for your Apostle! Did they have as much cause to fear aging like the girls did, after hearing about singles wards where the ratio was three girls to every boy?

I wasted four years of college chasing the Mitts, which sounds like an STI and may as well be for the emotional trauma it caused. Parties were not fun because I needed them to be romantically productive. Studying was stressful, not because it would impact my grades but because what if I sat down with my back to a Mitt?

I did a super-senior year of college, partly because of a scholastically empty semester abroad, but more due to my fear that if I graduated single I would immediately buy many cats.

Thankfully by my fifth year of college, I’d more or less come to accept that faking Ann-hood was getting me nowhere in my search for love. I started dating guys whose jaws were not square, who had lower GPAs and a better sense of humor. I was friendly with the many Mitts around campus and no longer daydreamed about which temple we would get married in.

But then one day Kyler Christensen himself asked me out, and I was thrown back into that 18-year-old daydream.

It was a group date with ten of his friends – a white elephant gift exchange at someone’s parents’ house, where I knew no one.

One of the boys brought a Costco-sized pack of Nerf guns as his gift, which immediately turned into a boys-only Nerf war while the girls gathered in the kitchen to talk about...clothes? TV shows? I don’t remember. I do remember that post-Nerf war, my date spent the remainder of the evening talking to a cute girl who had recently converted to Mormonism.

I do not remember five minutes where he and I were in conversation. I don’t remember him introducing me to anyone. I do remember feeling very stupid.

When he dropped me off he thanked me for coming, then said he “just wanted to make sure I was okay with us being friends.”

I wanted to scream.

I wanted to make it very clear in a very loud voice how I hadn’t wanted to date him for at least a semester now, and how he was the one who had asked me out!

Instead I smiled my best first lady smile and said, “of course!”

I walked into my apartment furious with myself for saying yes to the date, all while knowing I could never have said no.

In recent years, we’ve been forced to relive the horrors of BYU dating, from Instagram accounts pitting Provo guys against girls, to Provo’s Most Eligible leaning into “the cringe.” My reaction to all this being made public has mostly been NOOOOOOOOO but perhaps awareness is good? Something about the first step toward change?

I know it’s silly to still be annoyed at BYU dating, but here I am.

I eventually got married to a boy who started at BYU the same year I did. He lived in a neighboring dorm. He hung out with my cousin. And yet it took eight years and a move out of state for us to meet each other. Why?

Because he spent his five years of college buried in the HBLL doing what he had to in order to keep up with the accounting major he no longer uses – willing himself to become a Mitt for the Ann that I never was.