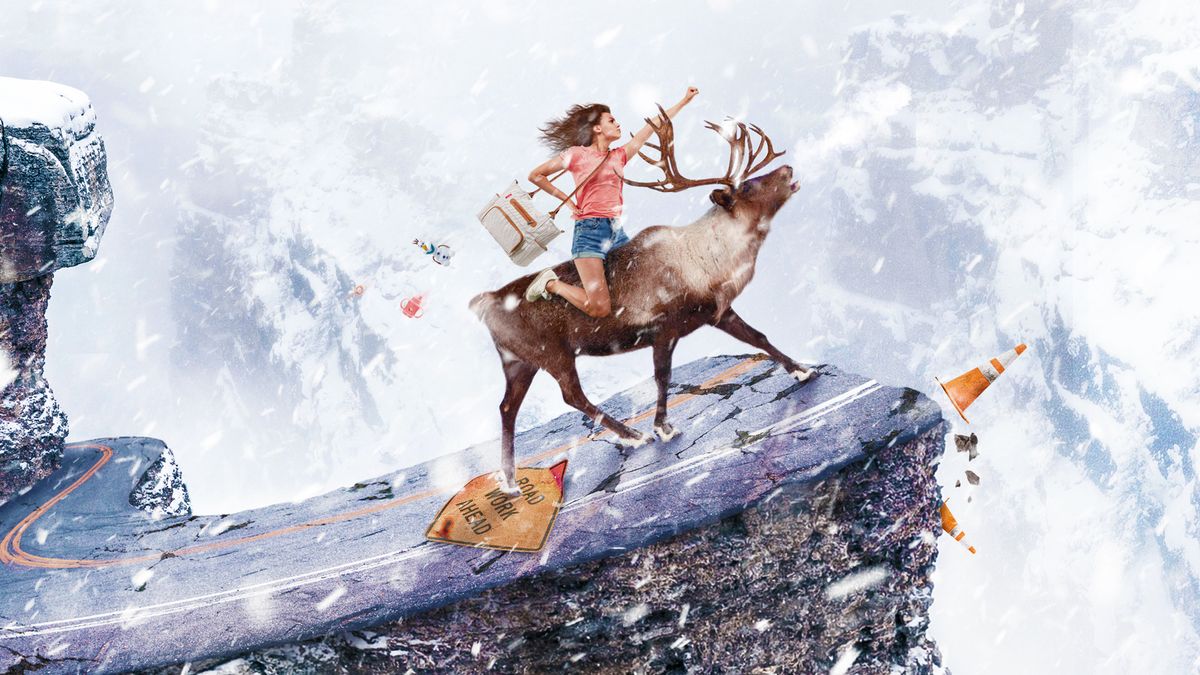 I merged into the carpool lane where I planned to stay planted until my exit sixty miles down the road. I sipped my Maverik 44 oz and turned up the Frozen 2 soundtrack my children had begged me to play. I expected a smooth drive home from Provo to Salt Lake. It was 7:00 PM on a Tuesday, amid Unprecedented Times, so other vehicles were few and far between.

“Into the unknooooooooooown,” my children and I sang together, sounding like a herd of distressed goats, as we cruised through Orem, Pleasant Grove, and American Fork.

“LANES SPLIT AHEAD,” a sign warned as we approached Lehi. I was not alarmed and hardly paid it any attention.  I’ve been driving through UDOT construction shenanigans my entire adult life and felt prepared for whatever abnormal traffic pattern awaited me ahead. I took another sip from my Diet Coke and hit replay on "Into the Unknown" because I was in a fun mom mood. But that mood was about to shift.

Because the next three minutes were some of the most terrifying in my 34 year existence.

As the "aaaa-aaa-aa-ooo" of "Into the Unknown" began again the lanes did indeed split, forking two to the right, two to the left. The far left. And because it was 7:00 PM on a Tuesday amid Unprecedented Times, there were no cars ahead of me to  lead the way and the mantle of pacesetter fell with a thud on my shoulders as my narrow lane careened into what felt like oncoming traffic. I expected to see a “WRONG WAY” sign as I drove further left, and as Elsa shrieked “Into the unknooooooown” for the thousandth time I yelled “IS THIS RIGHT?!” to the cars that were starting to pile up behind me, honestly hoping they might somehow respond in the affirmative.

Balancing my fear of death with my fear of angering the other drivers if I drove any slower, I did my best to Mario-Kart my way past Thanksgiving Point, keeping my eyes fixed on the road lines, which, looking back, may not have helped but instead only heightened the anxiety. Because either UDOT found an intoxicated driver and paid them to paint the dashes separating lanes, or the driver became intoxicated just before doing the job. I know this for a fact because my lane looked like this:

And sometimes the lines disappeared altogether only to appear again moments later a few feet to the left or right from where the original lane had ended. Like this:

“Mom, can we listen to something else?” a child asked from the back seat, as I violently rotated the steering wheel to try and follow the rapid ninety degree turns. “NOT NOW,” I responded as Elsa screamed “Into the unknoooooooooown,” through the speakers.

I zigged and zagged our SUV along miles of spiked, green fencing that blurred past my side windows like the boat tunnel in Willy Wonka but more upsetting. My pulse raced and sweat dampened my brow. It was like the time I drank an entire large BANG all by myself in one sitting because no one told me that you shouldn’t drink a large BANG all by yourself in one sitting and I was up until 4 AM wondering if my pulse would ever slow and if I should maybe go to the ER.

My mind raced with thoughts I assume most people have in their final moments. Why had I not done more to get my affairs in order? I've never even tried a cronut.  Should I call my loved ones and say my final goodbyes? No, I can’t do that because I never figured out how to activate bluetooth in my car.

And then. I saw a semi-trailer approaching on the right side. I held my breath and braced for the moment when I would be sideswiped or do the sideswiping as our two vehicles wound through a course that suggests the top minds at UDOT are big fans of Space Mountain, in a lane just wide enough for half a bicycle.

We swerved in and out of each others’ lanes, dancing a cursed tango, flirting with death. The twistiness of the lane made passing impossible. My position was locked. My sad fate assured. This was the end.

But then. The skies parted, the sun beamed, and the road widened. We had reached the point of the mountain. Alive.

As we passed IKEA my pulse normalized and the adrenaline eased, like after the four melatonin I took to counteract the BANG kicked in at 3:55 am that one time.

“Mom, can we please listen to something else?” my eight year old pleaded.

“Into the unknoooooooown,” rang one final time, and I immediately switched to NPR.

We were staying out of the unknown for a while.