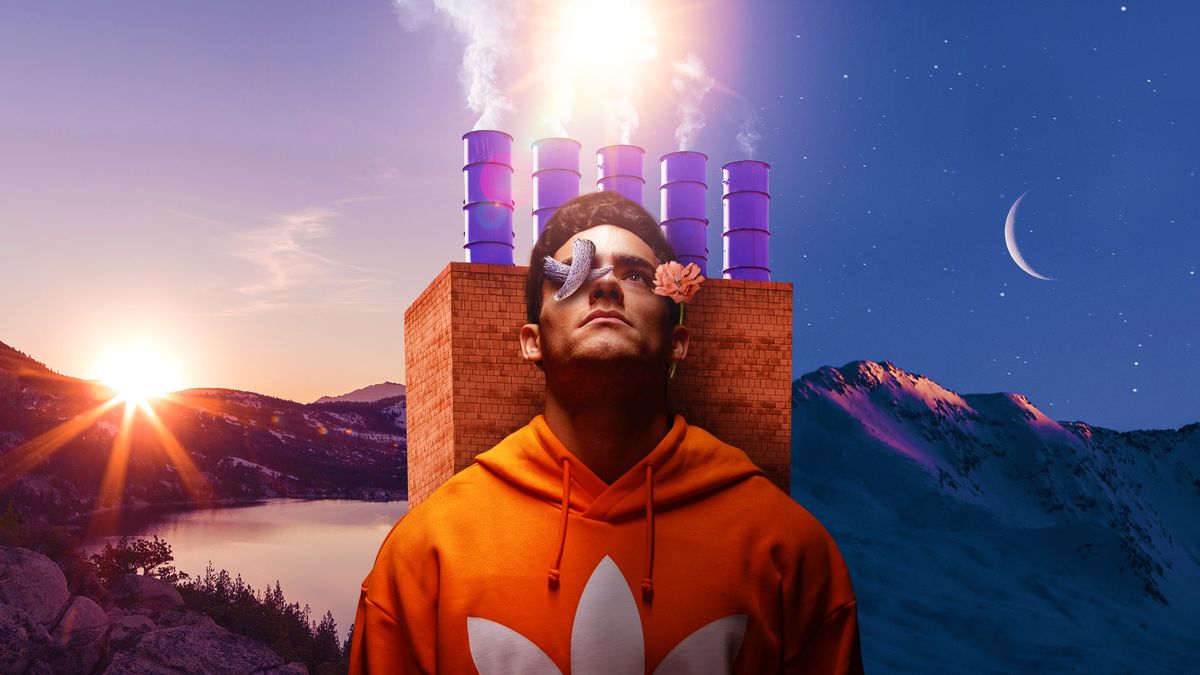 A few weeks ago, some friends and I went on an early morning psychogeography walk through the majestic suburbs of Heber, Utah. It was my first time doing a psychogeography walk, as well as my first time actually walking around in Heber in over 30 years. The last time I was there, there were no suburbs, just a few farmhouses that popped up every quarter mile or so along Highway 40. The city itself was mostly just a clump of buildings around the mile or two stretch where the highway turned into main street, stretching from the bowling alley all the way down to where the road splits off to go down Provo Canyon.

This time, however, there were plenty of suburbs, with houses spreading high up into the foothills. The unbroken expanse of dry grass and scrub oak that stretched from my house to the edge of town was now covered in lush green lawns, encircled with asphalt roads, and dotted with trees that were now so large it seemed as if they could have been there since time immemorial.  It was a strange, unfamiliar landscape, and we were going to explore it.

The idea of a psychogeography walk, as my friends explained it to me, was to come up with an algorithm for your path before you set out in order to force you off the beaten path.  Instead of following the major roads, or heading in a particular direction, you turn when the prearranged pattern tells you to. This forces you to go down forgotten side streets and into obscure corners of the city that aren't listed in your travel brochure (I would be curious to know what would be listed in a Heber City travel brochure). Of course, we had to be a little bit particular as to what we considered a “path,” as five minutes into our journey, our algorithm instructed us to walk through the local sheriff's open garage door. Since exploring the Wasatch County Jail didn't sound nearly as exciting, we decided to keep to actual roads.

Treating our expedition into the 49th largest city in Utah as an adventure straight out of a Legend of Zelda game actually seemed rather appropriate to me. I used to teach a course on videogame design and criticism and I would always show my students an old documentary that interviewed a number of the famous figures in videogame history, including Shigeru Miyamoto, the creator of the Zelda series.  Perhaps more than any of his early games, the original Zelda for the NES was inspired by his childhood in the rural town of Sonobe, near Kyoto, Japan. As a child, he would wander through the forests and hills near his home, making up stories as he went. One day he wandered up into the mountains, passing through wooded hills and over rocky slopes.  As he continued up, the landscape suddenly opened up, revealing a huge lake.  As a small child, the lake seemed like a vast ocean, mysteriously hidden just beyond the edge of his home town. If you've played a lot of Zelda games, you've probably noticed that imagery of lakes is pretty common. Many of the memorable elements of the game—the hidden caves, the winding forest paths, even the general sense of exploration and discovery—are recreations of Miyamoto's childhood wanderings.  It's hard to imagine exactly what that kind of childhood would have felt like, but I imagine the feeling I get when I play those games gives me just a glimpse of what it must have been like.

Although The Legend of Zelda was released during my childhood in the Heber Valley, I wouldn't actually get to play it until years later. With my closest access to a Nintendo 40 miles away at my cousins' house, I had to do my wilderness exploration the old fashioned way: by exploring the wilderness.

Having never been to Sonobe, I can't say for sure, but I think it's probably safe to say that Heber, even (or especially) the Heber of the 1980s is probably not quite as picturesque as the forested mountains surrounding Kyoto. Of course, my childhood home still had its charm.  The house I lived in was an old farmhouse built from volcanic rock with walls that were about two feet thick. The house had previously burnt down, killing the previous owner of the farm, but the massive stone walls survived, so they simply rebuilt it. The farm was eventually purchased by a wealthy and eccentric one-armed man from New York who decided cattle farming was the past and the future of meat was in BEEFALO, the majestic half-cow, half-buffalo hybrids that were going to take the meat world by storm. Since I now live in the future, I'm pretty sure that didn't happen, but at the time everyone seemed pretty excited about it.

Unsurprisingly, the rich New York guy didn't want to live in the death house (which still had the charred rubble of the previous house in the basement), so he built himself a proper modern 80s home at the top of the hill.  My dad got hired on as a farmhand and my family took up residence in the tiny stone house at the entrance to the beefalo ranch.

The ranch we lived on covered 250 acres of land, though my younger sister and I weren't allowed to go any further than the canal without supervision. This was probably for the best, since there were rattlesnakes, coyotes, and hundreds of large and not particularly friendly cows (and cow-buffalo hybrids) in the surrounding fields. Not that the area near the house was particularly child-friendly either. There were a couple of abandoned milking barns full of broken glass and rusted metal, not to mention the canal itself, which, from my mother's description, was certain death to anyone who came into contact with its waters. Of course, as children we weren't nearly as scared of these actual dangers as we were of the chickens that would constantly chase us across the yard, up onto boulders, or into the dank, tetanus-filled milking barns.

My sister and I had plenty of unsupervised adventures on the lower part of the farm, but our favorite place to go required the aid of a parent to guide us and our dog across the baleful waters of the irrigation canal.  From there, our journey turned north, following a narrow path that passed through dense thickets of scrub oak, across open fields of yellow grass, and around the scattered clumps of cacti tucked between the sagebrush. After what seemed like miles to a seven-year-old, we would crest the final hill and look down upon our destination...

We called it “Bone Heaven.”

It was a small gulch where the cattlemen would toss the cows that died of disease or old age.  I have no idea how many years ranchers had been dumping carcasses in this particular little canyon, but by the time we lived there, the gorge was filled from wall to wall with bleached white bones.  It was basically like that scene from The Lion King, except with cows instead of elephants and considerably less volcanic activity. There was a small path along the bottom of the ravine where you could walk among the piles of bones, admiring them. To us, it seemed like some natural wonder, like the geysers of Yellowstone or the Sequoias of the Sierra Nevada. Our dog acted like he'd died and gone to heaven, hence the name.

As kids growing up on a farm in the middle of nowhere, we thought bones were pretty cool.  We'd often collect random treasures on our journeys. Unusually large turnips, bits of old machinery, cool looking rocks, and, of course, bones and skulls made great additions to our collection of artifacts on display in our tree house. Actually, “tree house” is a bit generous. It was just the tree full of turnips and skulls that we would climb up into now and then. Still, these were the rewards we had earned on our quests into the rolling hills of Northern Utah. We had braved chickens and cactus spines and bees (oh man was I terrified of bees) to collect them. They were our treasures. The life of an adventurer was good.

Years later, it became apparent to me most kids didn't grow up playing in canyons filled with bones. I would occasionally find myself at a dinner party and make some casual comment about scampering among heaps of sun-bleached skeletons as a child, only to have the entire room go silent and stare at me. Even today, I often forget that this aspect of my childhood was somewhat atypical. When asked if I have any interesting stories from my childhood, my response is usually:

“Oh, I did normal kid things. I played a lot of videogames, drew a lot, explored bone-filled canyons, played soccer...”

The farm eventually fell victim to the same slow march of urban sprawl that my friends and I returned to explore. After a half-dozen iterations of our Lost Woods algorithm, we had wound our way through the maze of ranch-style homes, bungalows, misplaced cabins, and aspiring McMansions high into the foothills. We ended our adventure at a tiny neighborhood park. Coincidentally, the park overlooked the place where I had grown up. The farmhouse, with its absurdly fortified 19th century walls, the decaying dairy barns, and even our tree where we stashed our loot had finally been demolished to make way for the Wasatch Campus of Utah Valley University. Even the fancy 80s house on the hill had been torn down, leaving few landmarks for me to recognize besides the nearest surviving barn of one of our neighbors and the familiar contours of the land itself.

I wondered if the forests and caves above Miyamoto's home in Sonobe were still around.

The place that we explored that day wasn’t the town I grew up in. It was a new place, where new stories will be made, but they’ll be different stories.  I doubt anyone else will remember the graveyard where generations of cattle were unceremoniously laid to rest.  Maybe the only way I'll get to see that place again is if I turn those memories into a game like Miyamoto did.