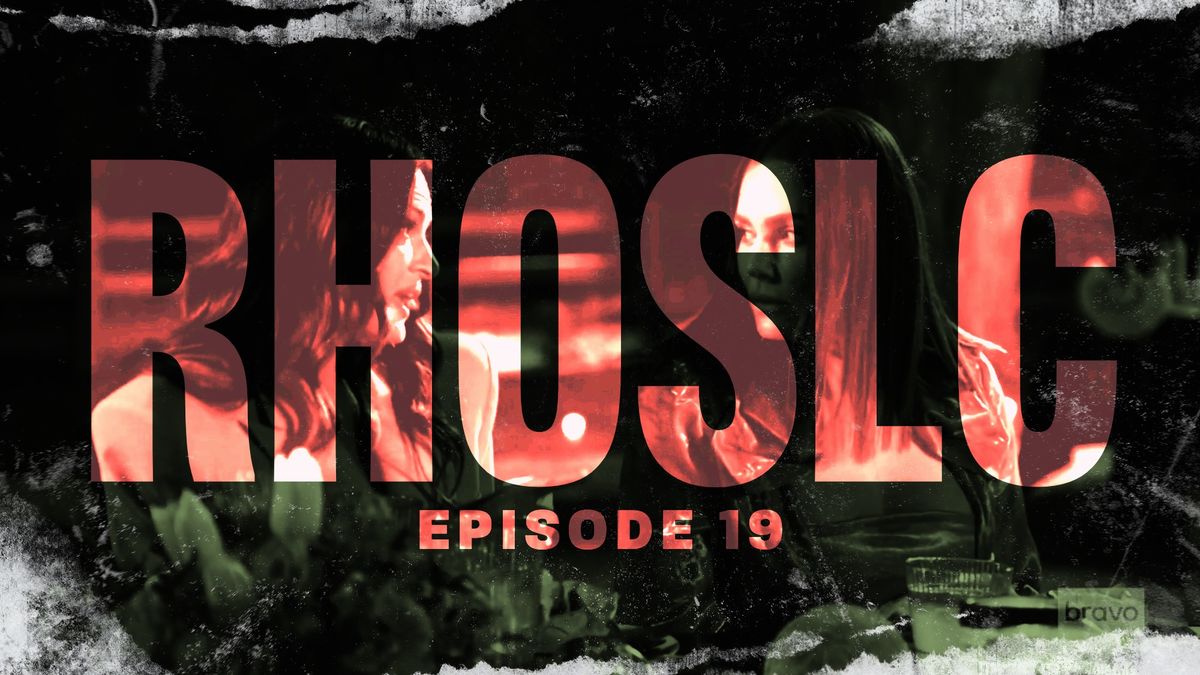 We rejoin our ladies for what feels like the twelfth day of their Zion trip. The women are closer than ever after a drunken night of Whitney and Meredith chugging from serving dishes. For but a moment, Meredith has condescended to party with the plebes:

The next morning, the gals are slow to get ready for their various southern Utah activities. Jen alone gets glam, as one under federal investigation for fraud and money laundering does:

She obviously needs the glam because she and Whitney are going ATV riding:

Heather and Lisa are going horseback riding on a friendship “first date.” They’re greeted by Whitnee with two E’s. Utah may not be known for its racial diversity, but where else can you go for such robust vowel diversity?

After their horseback ride, Heather jokes, “Thank you for asking me out on this date. At first I wanted to say no. But then I thought, you know what? She’s cute, she has money, give her a chance.”

The conversation turns to everyone fighting with Lisa. Heather says, “You’ve been at odds with everybody in defense of Meredith. I felt for you, and I just—I feel like...”

They corroborate intel and realize Meredith has vaguely given them conflicting information about the exact date of her father’s memorial. Who amongst us hasn’t fudged a date to get out of something? But they’re doing their jobs as Housewives and making it matter to them. Heather says, “She’s lying to you, or she’s lying to me.”

After their ATV ride, Jen and Whitney have the same conversation. Almost as if this show is being produced to drive storylines. They talk about how Meredith still has not told them definitively if her father’s memorial did or did not happen. Meredith’s dead father’s memorial isn’t anyone’s business, but (un)fortunately, she’s chosen to be on a reality show where what should be no one’s business is now kind of in the job description.

I could not focus on anything but Whitney’s dirt goatee:

Detective Whitney is still theorizing about why Meredith did not want to ride several hours on a party bus with coworkers she hates:

They address Meredith’s unwavering and confounding support of Mary. Jen says both Mary and Meredith think they can say and do whatever they want because they’re better than everyone else. And that’s what this is really about.

Meredith does have an air of superiority whether she means to or not, and maybe the ladies have chips on their shoulders. They have turned on her at her first sign of weakness. But making this about Meredith’s dad’s memorial while she’s clearly still grieving means they’re losing any moral high ground they think they have.

They’re invited to change into whatever makes them feel comfortable:

After their massages, they sit down to share chit chat and refreshments. Jennie apologizes to Meredith for bringing up the PI to Jen:

Meredith acts like a disappointed parent scolding Jennie, but the Jennie of it all just doesn’t matter anymore because Jennie was fired for racist social media posts. What else doesn’t matter anymore? Hearing from her stupid husband about how he simply won’t go to marriage counseling after he suggested bringing A SISTER WIFE into their marriage:

Jennie casually asks Mary how her husband Robert Sr. is doing, because this is a conversation, and Mary responds:

Back at the ranch, Jen is trying to make “Shah-mazing” happen:

While everyone gets ready for dinner, Mary calls her son:

Jen has planned a special dinner:

Meredith goes into Whitney’s room and sits on the end of her bed and utters some of the world’s scariest words: “I’ve gotta ask you something:”

Meredith says: “Jen has stipulated to the federal government that she has zero assets. If she’s paying for this dinner tonight, I can’t go.”

We’re venturing into fourth-wall territory again. Jen is not paying for this dinner. Whitney is basically winking at Meredith when she says:

My understanding is that Bravo foots much of the bill on these cast trips, and I don’t know why Meredith is being so weird about it with Whitney. I think she’s sleepy and wants to go to bed and she thought Whitney would be enough of an empty vessel to say she could tap out.

The ladies emerge ready for a fiesta. Heather has crafted herself an enormous Frida Kahlo-ish floral headpiece, and she’s come prepared with extras:

They head outside for dinner where there is a mariachi band playing. Maracas shake. Housewives dance:

Meredith is confused by the concept of carbs:

Jen passes out gift boxes to each of the ladies. In them is a diamond snowflake necklace with six diamonds on the chain to represent each Housewife:

Notably, Meredith accepts the diamond necklace, even though she was hesitant to accept dinner. Mary says she’s going inside to get a jacket and Whitney asks if she could bring back some blankets:

Jennie tells everyone that Mary was rude to her after their massages. Meredith defends Mary and says Mary doesn’t know Jennie that well, as if Jennie asked for Mary’s medical history (which we also happen to know a lot about). Mary’s bad attitude is wearing on the group.

Mary returns without blankets and Whitney trades in her detective costume for a chef’s hat because she’s stirring the pot:

It does not go well:

Mary reiterates that she thinks Jennie is rude and she is not going to apologize to her again. Lisa wants Meredith to stand up for Jennie:

Jen jumps on Lisa and tells her to “Stick up for her, and do the same for me. Like, be consistent.” Lisa says defensively, “This is not getting turned on me. I’m a great friend to everybody here.” Mary mumbles, “No you’re not.” Them is fightin’ words.

Mary directs her insults where she can hurt Lisa most:

The fight turns into a fight about the show, as most Real Housewives fights eventually do. Heather says to Mary, “What’s really clear is you aren’t really interested in being friends with Jennie.” What they’re all trying really hard not to say is: how do we move forward as a cast—as coworkers—when Mary and Meredith don’t want to pursue friendships with anyone? Finally Mary says what she's been wanting to say all dinner, if not all trip, if not all season: “We’re not real friends.”

Whitney asks Meredith how she can be “friends” (read: allies) with Mary, who has gone after Lisa, who is supposedly her actual real-life friend of ten years. Meredith says, “I can’t speak for somebody else. I don’t control what anyone else does.”

Lisa is hurt that Meredith is willing to support Mary at the expense of their friendship. She reaches her breaking point and walks away from the dinner table:

Meanwhile, Meredith apologizes for her tirade the morning before. Because Whitney no think so good, she AGAIN asks Meredith if her father’s memorial was fake:

As she realizes what she’s said and done, Lisa tosses back her mic pack and says goodbye to her friendship with Meredith forever:

The episode ends with To Be Continued...which actually feels warranted for once. RHOSLC has essentially turned into Harold and Kumar Go to White Castle with each episode spanning one day. Will the Housewives ever make it back to SLC? Will we?? Until next week, don’t miss Hive Mind’s weekly RHOSLC recap from The Beehive.