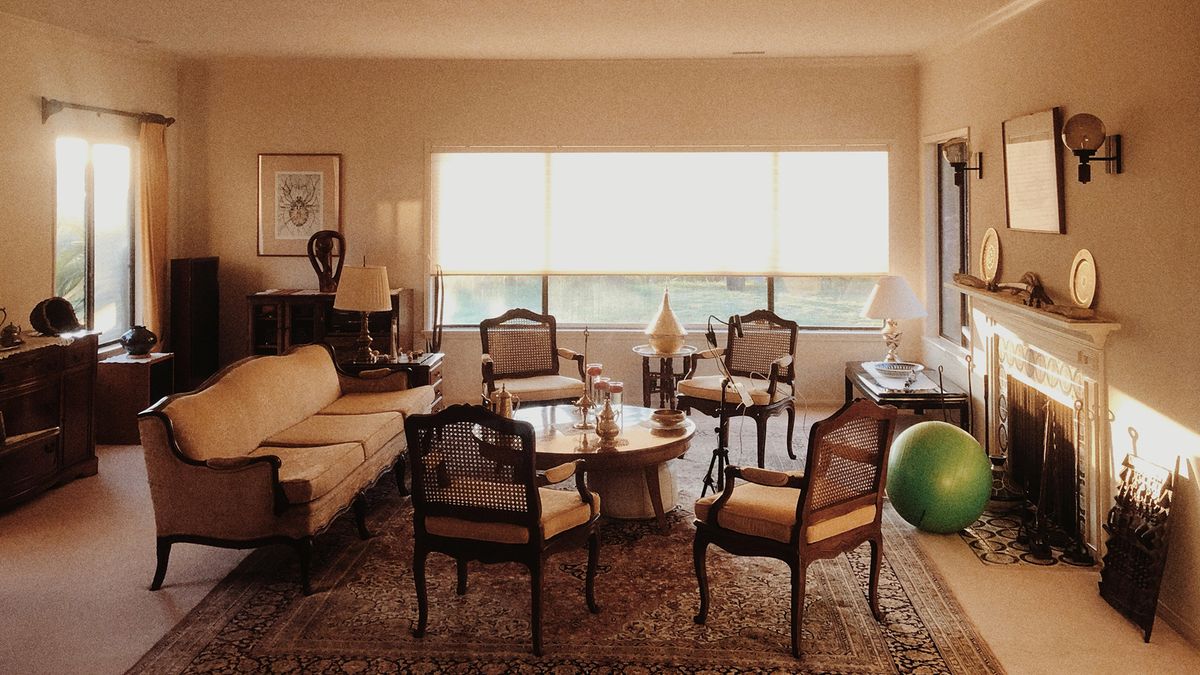 I’ve been trying to put my finger on something for as long as I’ve been a person with a quasi-developed prefrontal cortex.

Growing up almost entirely outside of Utah, we made the trip to Mecca many summers to visit family in Utah. We visited various family members’ homes up and down the Wasatch Front and beyond from Bountiful down to St. George. Every home felt sort of similar. Like visiting a museum display of the Oval Office to scale, it was surprising how familiar it all felt.

I’d known the elements intimately all my life, with the compound operating lawlessly without a name in the homes of Mormons inside and outside Utah. When I went to college in Provo and found myself in many more Mormons’ homes, the idea began to crystalize. It wasn’t until I moved away from Utah and observed a similar aesthetic in other Mormon homes that I was able to articulate what all of that is.
That is a Mormon house. You know it too. It’s the lewk of a house top-to-bottom in yellowed polished oak, as Brigham Young himself intended. It’s the smell of a musty LoveSac YEA I MEANT WHAT I SAID. It’s the familiar ambiance of a basement with *scare quotes* a “Theater Room.”

You enter the Mormon house through a modest foyer. A little bit of this: one of Greg Olsen’s Jesus prints on the wall (not the football player Greg Olsen, the Mormon art baller Greg Olsen); a little bit of that: a fall-themed family photo with anywhere between three to seven children lined up on a fence in coordinating jewel-tones on top and Khaks. All. Day. on bottom.

The family room in a Mormon home projects a feigned modesty, which is a central tension in the cultural identity. It’s comfortable, but not too comfortable. It’s big, but not too big. It’s decorated, but not overly so. Its style is, more precisely, a communicated lack of style, like negative white space, or “Live, Laugh, Love” signage.

When you as little as glance at the microfiber sofa in the living room, you can practically smell the hot dogs eaten at the RC Willey tent sale from whence it came. You’ve been sold on the microfiber by an RC Willey salesman because kids are messy! Practicality! Good deal! Kids eat free on Saturdays!

At first glance, the living room is absent of entertainment outside a family edition of the The Book of Mormon and Apples to Apples. But wait—is that a TV-sized cabinet space that could only logically accommodate a TV? Clearly the TV is in the armoire. We all know it. It’s a modest TV, a concealed TV, a discreet screen. A discrene. There’s always television in the banana stand. You never know what church-affiliated folk could pop in, who can never know that there is a television in the house. These folks are TOO BUSY doing CHURCH STUFF to regularly watch normal people TV!

If your homeministeringteachersvisitors do pop in, there is, of course, the designated homeministeringteachersvisitors room. Otherwise known as the serious parent lecture room. This is where you’ll find the ever-present piano, floral decor on the upholstery and in silk flower form, missionary plaques, and a glass-top—ahem—“hot chocolate” table. This is the museum of the Mormon house, where culturally significant artifacts are stored behind backlit oak curio cabinets, like a Price is Right Showcase prize.

The kitchen is both a centerpiece and an afterthought. It’s all pantry and island, with granite countertops and earth tones that say, “I’m in faux Tuscany.” For the matriarch in a Mormon household, the kitchen seems to be her dominion, and even her office. Sometimes it is literally that, with a communal computer nestled in a corner of the kitchen and bills neatly arranged in a complicated color-coded filing system. A label maker is safely tucked away in a Container Store-worthy drawer. Our ancestors scrapbooked so we could fly.

From there, wide, carpeted steps take you downtown to Mormontown where you will find a safe space that screams, “Wholesome good times ahead!” The crown jewel of a Mormon house is the enormous basement. Now, there are iterations of the Mormon House Basement™.

In its proto-state, it is unfinished with your basic ping pong table and dusty shelving system of food storage, for the inevitable Constitution Hanging by a Thread emergency, and definitely not for climate change. In an evolved Ivory Homes-type basement, there is a projector, pool table, kitchenette chock-full of popcorn and non-caffeinated soda, and—what you will see next may alarm you.

You’re going to see a giant-ass sofa. Or, a giant sofa for many asses. In any other home it would surely be excessive, but not here. You actually do need a sofa that large because you’re gonna have to cram a lot of behinds on that sofa. You got your many children, and all those kids have their many friends, and so on and so forth and Amen.

If you’re lucky enough to find yourself in a theater-room version of the Mormon basement, the theater seating may even include cup holders signaling abundance, yet not enough restraint. Hold my beer. And by beer I mean beverage, and by beverage I mean just water, please. Or Sprite if you have it?

The exterior of Mormon houses are not immune to the gravitational pull of cultural relevance. There’s the stucco version, the stone version, the version with stone, stucco and brick, but always with vinyl fencing and a trampoline in the backyard. Complete with an Augusta National-level sprinkler system to ensure a perfectly manicured green lawn and severe drought warnings for all.

What I’ve described is the Mormon house of yore—the one preserved in my teenage brain. But it didn’t die out with accent walls, the Bush years, and Nickelback. It would need more than those asteroids to go extinct. Joseph Smith prophesied that the gospel would roll forth unto the ends of the earth. The Mormon house certainly has rolled forth, unto the ends of Vineyard and into the far stretches of Lehi and Saratoga Springs and beyond.

The Millennial Mormon houses of today involve much more buffalo check and shiplap, as the Magnolia Gaineses have had unprecedented influence over our people, like an invasive, yet lovely, foreign plant species—perhaps dried eucalyptus. Fuzzy accent pillows and rubber succulents and commoditized eclecticism and a helluva lot of baskets . . . oh the baskets. I will not be taking the time now to visit my basket-buying problem, but we can talk about it later. This Gainesien era came after a long period of WTF, where we couldn’t help ourselves from chevroning this or shabby chicing that. ‘Twas a dark time.

Although modern American monoculture is effectively obsolete, Mormons have always carved out a culturally, and often overwhelmingly, homogeneous corner of the world. That corner of the Mormcore world looks a lot like Target these days, an amber-glassed Modern Farmhouse beautiful nightmare where letter boards remind you: “You’re one of us now.” I guess that doesn’t sound like such a bad place after all, as someone who dreams of strolling Target alone without a cart full of children in tow, or rather, them towing me.

I know it’s Mormon house monoculture. I can feel it in my bones and see it on Instagram. I’m one chalkboard-painted wall away my fully-evolved Mormon Charizard form. After all, you can take the Mormon out of Utah, but you can’t take the . . . you know.