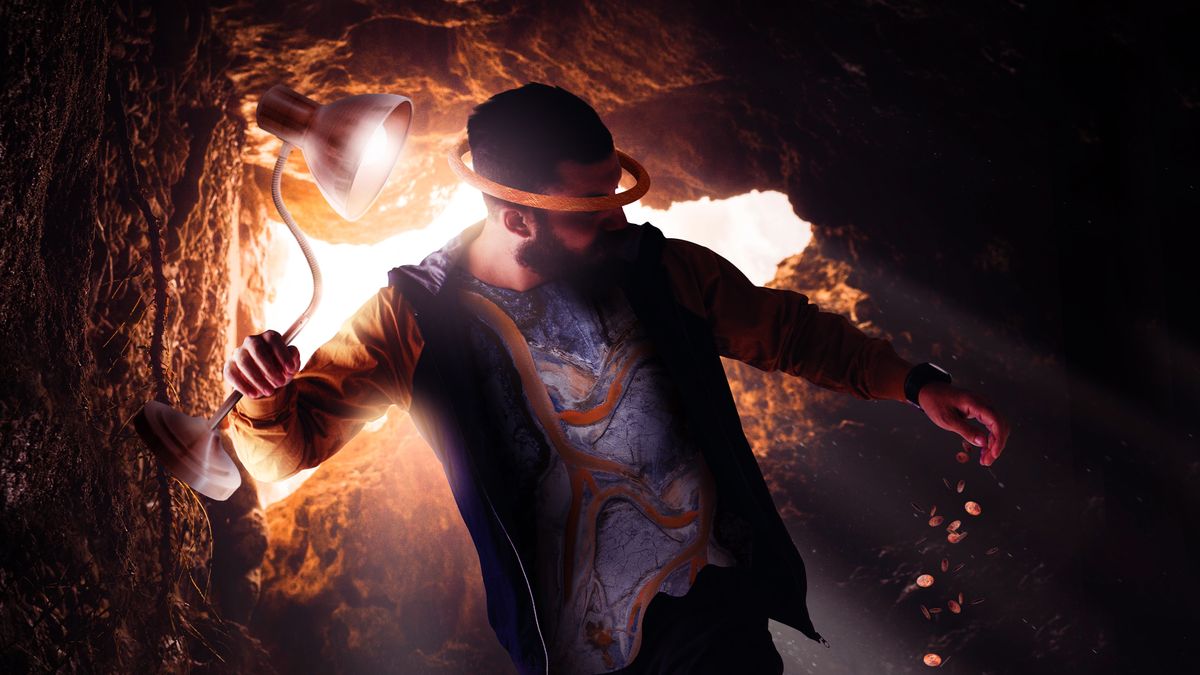 When I was seven, I thought my family was living at the base of several volcanoes. I was a worrier and used a lot of my anxious energy in the early 90s imagining what we would do if the entire Salt Lake Valley suddenly filled with lava.

Obviously some kind of boat would be required, but I feared there weren’t enough of those to go around, and my family didn’t have one anyway. On more than one occasion I asked my parents if they would consider at least purchasing a canoe. They thought I was a normal child who wanted to recreate in a lake somewhere, not a frantic first grader who was considering my family’s emergency preparedness.

I thought we lived at the base of several volcanoes because that’s what Kennecott Copper Mine looked like to me. We lived in South Jordan, and just to the west of us, covering a large portion of the face of the Oquirrh Mountains, were colorful funnel-like shapes with openings at the top.

I’m sure I learned these weren’t volcanoes sometime before third grade, but the fact they were mines wasn’t actually confirmed until I went on a field trip in 1993.

“We almost canceled this activity because of what happened at Wheeler Farm last fall,” Ms. Bookmore said with her hands on her hips, referring to a prior field trip for which we were each later required to write personal apology notes to some people who tended chickens for reasons I don’t fully remember. “But we decided to give you one more chance to behave like civilized children.”

Ms. Bookmore was standing at the front of the bus when she pre-scolded us for what our behavior would likely be at the Kennecott Copper Mine that afternoon. This highly-anticipated outing had been referenced on a daily basis for several weeks, usually in threat form. “I’m still considering canceling our upcoming field trip,” she had said only the day before when it was reported that our entire class had fully engaged in a mud fight at recess notwithstanding the recess aide’s shouted protests.

The recess aide was Kyle Jackson’s mom. I’d had a run-in with her the prior December when someone told her I started a rumor that Melanie Carter mixed dog food in with her lunch. Mrs. Jackson had placed a finger in my face, sternly asked “Do you know what the Golden Rule is?” and then recited my charged offense. She didn’t find relevant my exasperated objections that it wasn’t dog food, but cat food, and that I hadn’t started the rumor but had only helped spread it.

Mrs. Jackson tried to escalate the issue to the principal’s office, but it was dropped without further investigation after Melanie Carter was called in and asked whether she wanted an apology from me and she responded “who?” (Melanie Carter was cute and popular and I was neither of those things independently, and certainly not both of them together.)

Still stinging from her December loss, Mrs. Jackson had marched into Ms. Bookmore’s class after the mud fight, filling in the blanks but mostly letting our clothes, hands, and faces speak for themselves.

Ms. Bookmore hated rewarding bad behavior, but not as much as she hated coming up with lesson plans, which is how we ended up on the bus the very next morning for our highly-anticipated mining adventure.

We couldn’t imagine a more thrilling thing. Kennecott Copper Mine! On a school day! Would we ride minecarts into the bowels of the Earth? Would we get to wear those hard hats? Would we see the seven dwarfs?

Over the next few hours we sat in conference rooms while people from the Kennecott corporate offices indoctrinated us with anti-environmentalism propaganda.

“Some people will tell you we’re destroying a mountain,” a woman in a dark pantsuit told us. “Those people apparently don’t think we need pennies,” she hissed, not really making the point she thought she was making.

Then we rode the bus home, somewhat disillusioned, vastly disappointed, and ready to care a little less about the planet.

Five years later I started attending Bingham High School. Our mascot was a copper miner, an homage to the Kennecott Copper Mine to the west.

My older sisters had attended Bingham years before. I was so used to the idea I would one day be a Bingham Miner that it never occurred to me how strange our mascot was. I don’t know why we couldn’t be something normal, like, well, any animal ever. But in college when people later joked about what a stupid mascot a Miner was I couldn’t help but just be grateful I didn’t attend our neighboring school to the east, because being a Bingham Miner was certainly better than being a Jordan Beetdigger.

Who was the angry person who hated his community enough to come up with “Beetdigger”?

The point is, Kennecott Copper Mine was in my blood and on my mind so constantly by 1999 that I guess I sort of assumed it was on everyone else’s minds, too.

I was 15 when it happened – an event I have recalled with shame and embarrassment once a week for the last twenty years. It was spring and I had just walked out of Bingham High School and started heading home, my Jansport backpack hanging from one shoulder, a Discman in my left hand loudly spinning a Garth Brooks CD that had been in there for at least four months.

A man with a foreign accent pulled his car over, rolled down the window, and asked me if I could tell him where “the copper pit” was.

“Oh boy. You gotta head that way,” I said, pointing west, and pulling my right foam headphone back from my ear. “Just drive until you hit the mountain—about 30-40 minutes. There will be big signs. You can’t miss it. It looks like a bunch of volcanoes.”

He was already out of my sight, his car heading off into the sunset, before I realized he was probably not asking how to get to Kennecott Copper Mine, but rather to our high school auditorium, which was called “The Copper Pit.”

The advanced theater class was putting on a performance of Our Town that afternoon. I knew about the production because I was in beginning theater at the time and had been offered extra credit, which I declined, if I would stay after school for the show and then write a paper about why Mr. Landeen did a good job as director.

I had already given up on my dream of starring in a brain-on-drugs commercial due to a series of Saturday afternoon acting workshops Mr. Landeen forced me to attend where a middle-aged man made us pretend to cry while saying “I love you” to him.

At the time I had decided this must be what acting is, in which case I was definitely not meant to be an actor since I couldn’t even imagine feeling positive emotion for this stranger in brown corduroy pants and an oversized blue polo shirt that wasn’t doing him any favors. Two decades later I have an entirely different perspective on this whole activity, one that makes me feel a retroactive urge to call the authorities.

In any event, I now assume the foreigner wearing a tie who stopped me for directions to “the copper pit” at 4:45 PM, only fifteen minutes before the start of the show, was probably looking for the auditorium located at the address in front of him and not a dangerous industrial work zone 35 miles away. Yes, it was possible he was late to a field trip at the mine, but really the theater makes more sense.

It was too late to catch him and explain my error by the time I realized it.

Some say that man is still wandering around the Oquirrh Mountains, searching for a gaggle of teenage thespians, and perhaps hearing a lecture about copper pennies from a defensive lawyer holding a briefcase.