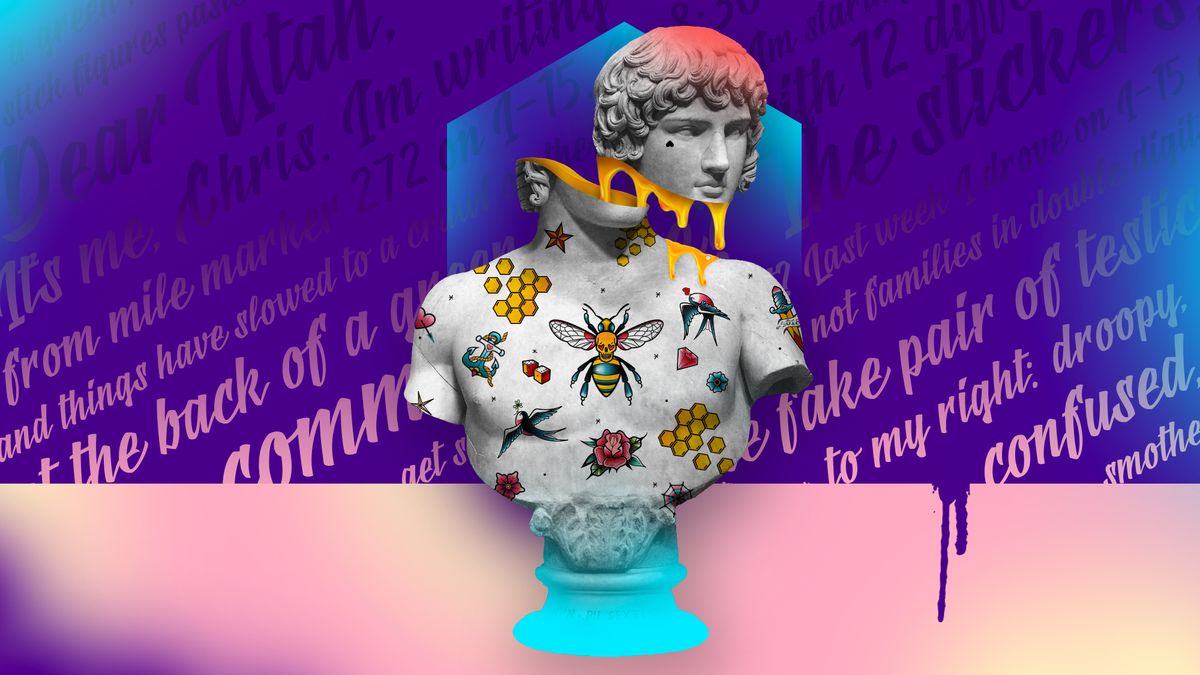 Donovan Mitchell and Rudy Gobert recently released Letters to Utah that were actually videos. Confusing, I know. Their hearts were in the right place, even if they failed to mention minivans or dirty soda.

I too love Utah. If I were a braver man, I would get a beehive tattooed on my stomach and a queen bee with Orrin Hatch’s head upon my left pec. Possible worker bees, depending on space and available funds for body ink: Walter Plumb dressed as an undertaker, shoveling dirt onto a marijuana leaf; Mitt Romney in striped pajamas eating a raw hot dog; Paula Houston stuffing the entire world’s Cosmopolitans into a sturdy desk; Gary Herbert in a crisp white lab coat, dripping a test tube filled with alcohol onto melting kids; Karl Malone resting on a wooden porch in Levi's overalls and straw hat, ruffling the fine hair of a tiny dog that speaks like Mehmet Okur; a tattered, sun-weathered bonnet filled to the brim with bubbling orange soda; a house-sized chocolate chip cookie that shelters BYU’s entire student body; and a granite statue of Steve Young where the left arm is three times bigger than the right.

Tattoos aside, I can’t live in a world where videos are marketed as letters. I’m a traditionalist. I believe in the power of the written word and wholesome values like saving my kisses until the third month of marriage, or never saying the f-word in front of a lady. Today’s rotten teens only communicate via lowercase acronyms and Facebook Messenger emojis — there’s never been a greater need for letters written by 32-year-old men to a large area of land. Thank you to Donovan and Rudy (and the PR team who forced them to do it) for the inspiration.

It’s me, Chris. I’m writing to you from mile marker 272 on northbound I-15. It’s 8:30 am and things have slowed to a crawl on the interstate. I’m staring at the back of a green minivan with 12 stick figures of various size pasted to the back window. When did this become commonplace? The stickers, I mean, not families in double digits. I feel like the pair of fake testicles dangling from the old Ford truck to my right: droopy, confused, and smothered in exhaust.

On the bright side, I have plenty of billboards to keep me company. Some takeaways from my roadside reading: I have unlimited options if I ever need a face lift, buttocks injections, or breast augmentation; it’s mandatory state law all tech billboards include the word “disrupt”; hospital emergency rooms have five minute wait times – meaning you wait five minutes for the opportunity to wait five hours; and Cosmopolitan is indeed porn. Maybe this traffic jam is a blessing. I’m always wishing I had more time to read, now I can kick back and contemplate which surgeon is the one to turn my lemons into melons.

I have a confession: my deepest fear is dying in a road rage incident. Don’t laugh. I’m a passive person by nature, but you never know who is hopped up on Monster Energy and trolling for a fight. Last week I was on I-15 and saw one car cut off another. Both were driven by younger guys (I’d guess somewhere in their 20s) and at first glance, I thought they were arguing about who had the bigger Monster. They pulled alongside one another and proceeded to scream obscenities — I could see spittle spraying across their windshields. They screeched off an Orem exit to continue the argument, or perhaps settle it as cavemen would, and I thought, “How is it possible to be that mad about anything?” I want to believe it’s a recent epidemic, like we caught a bad cold and the cure’s a heartbeat away. It’s harder to live with the opposite — we’ve had this fury locked inside forever, only now we’ve found the key.

I’m currently listening to a college football gambling podcast at 1.7x speed. Don’t judge. When the world is a scary place where people die in Monster-fueled rages and proudly display testicles on their trucks, I find comfort in the sped-up sound of football statistics. Now I talk faster and expect the same in others. If someone tries to converse with me at 1.0x speed, I slap the side of their head until they shift to an acceptable pace. Information is currency, and speed is the highway to gold.

Can we talk about the smog? As it turns out, pumping large amounts of pollution into the air and a continually expanding population isn’t a good recipe for clean living. I’d like to say we’ll straighten things out, but that would require a cohesive effort from a group of people who mistakenly believe they’re rappers. Not happening. And honestly, that rap video will kill us faster than any amount of inversion. So, sorry about both.

It looks like traffic is picking up, so I’ll be brief. I’ve called you home for the majority of my life and our memories are intertwined. I was raised inside a religious family and learned the meaning of separation with love. I found God on a mountaintop. I developed fear of giant sodas, especially diet ones. I whiffed an honest smell at a BYU football game. I punted on our politicians. I cheered a doomed Jazz season and clawed for hope in the ashes. I discovered a tech sector filled with walking polos. I became a walking polo. I dreamt people stopped hurting one another and woke to a different world. I learned you’re not perfect, and neither am I, and that’s okay.