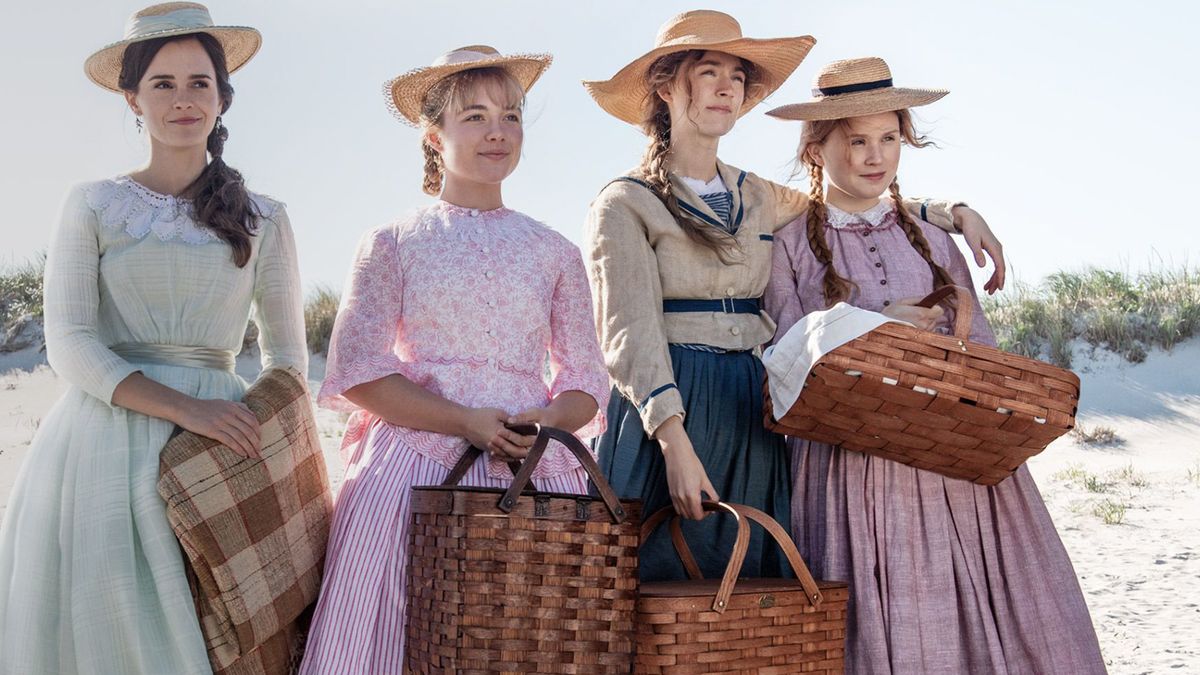 “I guess the only time we can see it all together is Christmas Day at 10:30 p.m. Well, Christmas night,” I said, exasperated by the lack of viable showtimes.

“Mom and I are gonna need a night nap.” sighed Eliza, practical, and annoyed by the prospect of such a late night.

“Sydney, it’s your call. You’re the one who’s up with a baby all night.”

“I don’t care. This is the only thing I wanted to do for Christmas, and I’m leaving tomorrow, so we just have to do it then.” It had been a tough Christmas for Sydney, with a newborn who never slept and a body that was slow to recover.

“Me too. Literally all I wanted for Christmas was to see Little Women with my mom and my sisters.” Katie sold the idea, which sold the rest of us.

“Ok, I’ll buy the tickets now so we have to commit. And don’t tell Mom how late it is.”

When Greta Gerwig’s first Little Women trailer was released in August, our family group text was ablaze with all caps and exclamation marks and crying emojis. “LITTLE WOMENNNN!!!!!” “We HAVE to see it at Christmas!!!!” But once we were all there and with limited time, we had the realization on Christmas Eve that if we were going to see it together, it had to be the latest showing on Christmas. Five tickets for four sisters and one Marmee.

Before and after Christmas was a revolving door of all the women in my life. We have Christmas with my family every other year, and we’ve had the talk that maybe it won’t be sustainable forever as our families get bigger, but we were doing it at least this year.

First Sydney flew in from California with her husband and colicky newborn, I got there after my husband’s finals were over, Eliza after hers, and finally Katie, who drove 15 hours from Texas by herself with two kids, just in time for Christmas festivities.

When there’s four of you and you happen to be women, you can’t escape the connection to Louisa May Alcott’s Little Women. It wasn’t something I just read or watched, but people and memories inhabited and internalized. I’ve always known the story as far back as my memory can inch. And like the story, memories come back in vignettes when I reach that far back.

It’s Jo burning off Meg’s hair, Amy falling through the ice, Jo cutting her hair, Beth getting sick and getting better, and then not getting better, staying up all night making up stupid dances to the Moulin Rouge soundtrack, Eliza getting mad when we teased her because she’s the youngest, the last Christmas we were together when Katie told us she was getting divorced and we all cried, and this particular Christmas Eve when we made up yet another stupid dance to N*Sync’s “Merry Christmas, Happy Holidays,” and things felt better.

When we smushed into my mom’s car to drive to the movie theater just before Christmas was over, there were just enough seats for everyone in her empty-nester sedan. We were getting the band back together again and drinking Diet Cokes to stay awake because now there’s babies and deadlines and early mornings and the aches of beginning-to-age bodies.

I sat forward, elbows propped on my knees all through the movie, glancing to either side often to watch us all take it in. Mom, of course, dozed at times — happy to just be together — but the four of us little women laughed hard and cried harder and felt it all more deeply than we were expecting. It was probably because it was so late and Christmas and all of us being together, but it was also more, the more being harder to narrate.

We cheesed when Jo and Laurie danced at the winter ball, cringed when Amy burned Jo’s story, ugly cried when Laurie proposed and Jo declined, really ugly cried when Beth died, and happy cried through smiles when Jo published her book at the end. There was lots of crying. (Nothing new here, if you can imagine four hormonal teenagers using one bathroom.)

It was almost too much. Being there with my sisters and my mom and seeing something even better than I could have imagined — something practically perfect. The first scene in Little Women, with the March sisters chirping at each other and Alcott intricately introducing each one, sets an idyllic stage. Part I ends with Meg engaged and each character acting themselves true to form. But the story wouldn’t mean what it does if it ended at Part I.

I used to skip Part II when I read the book and watched the old 1994 movie. In Part II, Amy goes to Paris, Beth dies, Meg’s poor, and Laurie doesn’t end up with Jo, but with Amy instead. The little March women grow up because the big world does what it is wont to do and forces change upon them. My sisters and I are not the little women we were when we shared bedrooms and cars and CD players, and sometimes I wish I could skip this second part, or at least chapters in it, but the independence forced upon me has highlighted the memories that reveal glimpses of who we were and who we’re becoming.

In Little Women Alcott writes, “Such hours are beautiful to live, but very hard to describe.” There’s irony in writing a story about seeing Little Women and not being able to adequately describe the transcendental experience of doing so. I would have sat there with my sisters and my mom and the March sisters forever. But the page turned and we had to go.

I’ve been doing my own internal “Which March sister are you?” quiz my whole life, but gaming the outcome to always come out a Jo. Meg by birth order, I’ve wanted so desperately to be Jo who writes and is quick and the hero of the story. But looking left and right at my sisters and my mom, who are not Jo's, I wanted resolutely to be like them. I want to be strong like Katie and measured like Sydney and a caretaker like Eliza and wise like my mom.

The whole way home we talked too loudly for the late hour about who was whom and awkwardly laughed about who had to be the noble and tragic Beth and then stayed up till three in the morning taking those cliche “Which March sister are you?” quizzes. We all agreed this late night was the best part of our Christmas. It had the same kind of picturesque sheen of that first Christmas scene in Little Women.

Siblings are the North Star, there before you find your own people, there after your parents pass on. “I could never love anyone as I love my sisters,” writes Alcott. Sydney left the next day, then Katie, then Eliza, and lastly me. Back in my own little house with my own two little women, I’m Marmee and Jo, attempting to raise them right and teach them to love each other fiercely. Watching their first part, happily muddling through my second, writing down a few stories along the way, and proudly grounding into the earth as I grow, as one of four little women.

How Badly Did You Embarrass Us On The Bachelor/Bachelorette?