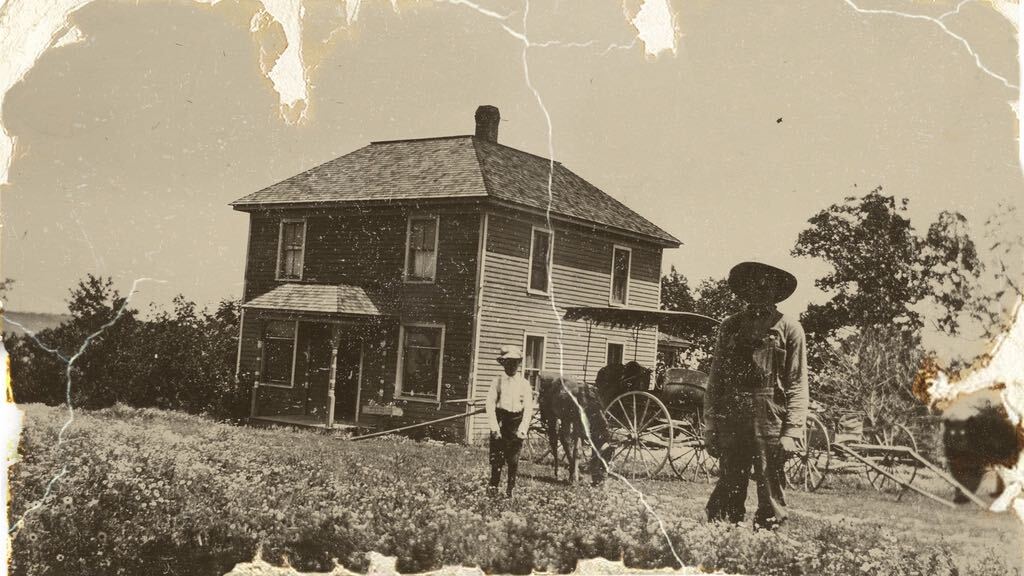 I was wrapped in a warm sleeping bag, nestled between my dad and older brother. I gazed up at the canvas roof and listened to the symphony of crickets. Just as sleep was about to take me for the night, my dad nudged me.

“Do you want to hear a scary story?” he asked.

I nodded, and then realized he couldn’t see in the almost total darkness. “Yes.”

My great-great grandfather lived and worked in Alta, Wyoming. Alta was, even in 1928, a small, charming community. The small handful of families who lived there had been the first to settle the area, drawn to the majestic Teton peaks and rich farmland.

The Green family was one of the largest in the community and, therefore, heavily involved in all activities. The Green brothers—Elvin, Thomas, Oscar, Austin, and Doc, my great-great grandfather—all worked hard on the family farm and up Teton Canyon in the sawmill.

On a beautiful October day, the small community was abuzz in anticipation for a big celebration: the annual fall bonfire. To borrow a phrase that was extremely relevant a few years ago but nobody talks about anymore: “Winter was coming.” These farmers couldn’t wait for this last event before the long winter.

Doc, Elvin, and Oscar were in charge of supplying the wood for the bonfire.They couldn’t have asked three more experienced men to complete the task. Each had practically grown up at the family sawmill and knew all about cutting down the best wood. The trio woke early to hitch up the horses, ready the wagon, and set out.

The coming sun created a fiery orange line along the mountains as the men crossed over the rickety wooden bridge at Teton Creek. The empty wagon trudged along the foothills and entered the canyon. It kicked up a little bit of dust on the worn road.

As they headed further into Teton Canyon, they passed more and more boulders. They were spread out all over the flanking mountainsides, some as big as a house. To this day, the locals call one of the more prominent ones “Bread Rock” because it looks like a massive loaf of bread with a thick slice cut out of it, just waiting for huckleberry jam.

Past the boulder field, the trees got thicker and the terrain became more uneven and forested. The Green brothers found a spot near the creek, unpacked, and started the work of chopping down trees.

The hours passed quickly, the brothers wiped sweat from their foreheads as the sounds of axes falling echoed through the trees. Throughout the day, they talked about their work, their families, and the delicious meal they were sure to have later that night.

Around lunchtime, the horses started to behave oddly. They stamped nervously and threw their heads back. The brothers calmed them and started to talk louder than before, hoping to ward off any bears or mountain lions. They didn’t notice the clouds starting to drift in.

By early afternoon, they had a wagon full of wood and set off for town. It was now fully cloudy and threatening rain. They pushed ahead quickly. They had barely gone 100 yards when the horses started to get agitated again. They couldn’t be calmed.

In the boulder field, the wind picked up and nearly blew Oscar’s hat off his head. He grabbed at it and turned his head, seeing something out of the corner of his eye. He did a double take. There was something standing on the top of the mountain overlooking the canyon.

It was a giant black…something. Oscar shouted over the wind at the others and they all turned to look. Just as they did, it started to move. It passed over the edge and started down the mountainside.

Doc urged the horses on as Oscar kept his eyes on the thing. It passed over massive boulders like they were nothing. It descended too quickly to be a moose. Maybe it was a black bear?

The horses weren’t cooperating. They fought against the wagon in their panic. Doc had to concentrate on keeping them on the road.

Elvin and Oscar watched as the black thing reached the canyon floor. Their view was obscured by boulders, but they caught a glimpse of the creature here and there. It was coming closer to them.

Elvin reached for his rifle and made sure it was loaded. Oscar and Elvin exchanged nervous glances.

The rain came down around then. It wasn’t a trickle either; it was a downpour, a waterfall. The storm clouds swirled around the canyon, dumping everything they held. The brothers were soaked within minutes.

Oscar, Elvin, and Doc wiped the rain from their faces. The horses were more eager than ever to get home and hurried along, more focused than before. Doc ventured a look back and clearly saw their pursuer on the path behind them.

Elvin lifted his gun and aimed at the thing. It definitely wasn’t a black bear. There was no snout, no features at all. It also didn’t lope along like a black bear. Oscar racked his brain, searching for what this could be.

As the thing gained on them, they got closer to the old bridge over the creek. The wind shifted and started blowing from the direction of the thing. Their noses filled with the smell of rotten eggs.

Oscar’s face was filled with absolute terror as they watched the thing cut a corner behind them. It was now only 60 yards behind the wagon, which was bumping along at a furious pace. Some logs bounced out of the wagon but no one noticed. All three Green brothers were focused on the creature chasing them.

Elvin’s finger had been on the trigger for a while now, but he hesitated, trying to figure out where to aim. As it gained on them, he fired a shot over its head. It didn’t even flinch.

Doc yelled at the horses to go faster. They approached the bridge going faster than any of them had ever gone before. The giant black thing was near the wagon, moving furiously, swiftly.

They hit the bridge with a massive bounce that sent several logs flying out both sides. Elvin and Oscar grabbed onto the wagon and glanced around, hoping the old bridge would hold.

When they looked back, they didn’t see anything. Both of them blinked and looked around. The sulfur smell was gone. The black thing was gone. It had vanished as soon as they crossed the bridge.

They grabbed Doc’s shoulder and he quickly turned to look. Realizing the thing was gone, he slowed the horses, which gratefully started trotting.

The Green brothers breathed a sigh of relief as the storm eased off and blew over the mountains toward Jackson Hole. They headed straight to the celebration with the wood… and with a good story as well.

In that tent in the woods, my heart was pounding. My eyes were wide and sleep had completely left me as my dad finished the story and said, “Pretty scary, huh?”

Suddenly, I had to go to the bathroom. I sniffed the air for sulfur and even though I didn’t smell any, I didn’t want to take the chance.

I held it till morning.

This is a reader-submitted story by Kyle Treasure. Kyle is a former Wyoming cowboy turned coastal elite who spends way too much time producing his Instagram cooking show and thinking about Fleetwood Mac.