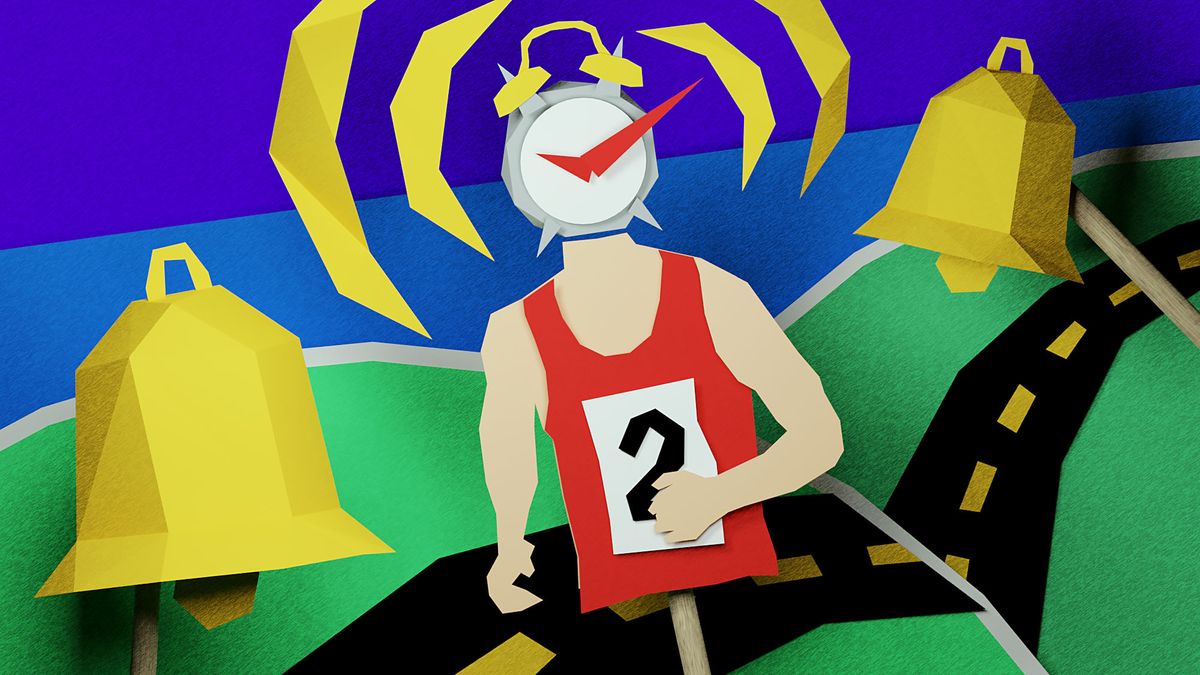 It’s 4:00 AM on the morning of Saturday, August 14th, 2021. My alarm is playing the sound that the good people at Apple decided to label “Playtime.” It’s almost as if they knew I’d someday settle on making that my early morning alarm of choice, and somewhere a product designer is laughing at the thought of me waking up at 4:00 AM on a Saturday to a sound called “Playtime.”

Before you come down too hard on “Playtime,” just hear me out. Choosing a super early morning alarm sound is a delicate dance. You can’t risk one of the less abrasive options like “Crystals” or “Reflection.” Something even a tiny bit soothing is a gamble so many hours before sunrise.

No, you need something just obnoxious enough to make sure you’re good and awake, but not so jarring as to make a 4:00 AM wakeup call any worse than it needs to be. (You classic “Alarm” people are insane.)

Alright, it’s 4:00 AM on August 14th, “Playtime” has done its job and got me out of bed at this truly ludicrous time. Why? Well, it’s my 40th birthday and to celebrate, I’ve chosen to run 40 miles.

Hi, my name is Justin, and I have a really stupid hobby. A stupid hobby that I love for reasons I don’t understand.

This last Friday, the 10th of September, over 300 people who also have a stupid hobby they love (for reasons I imagine they understand far better than I), all turned off their thoughtfully chosen alarms at some ungodly pre-dawn hour.

They triple-checked their gear, downed a cup of coffee, applied a generous layer of body glide to the “chafier” areas of the human body, and headed to a relatively nondescript section of the Kaysville foothills. All before 5:00 AM, and all to run 100 miles.

The Wasatch 100-Mile Endurance run is the oldest, and most prominent 100-mile race in the state of Utah. What started in 1980 as a cobbled-together route attempted by a handful of local ultra runners now hosts hundreds of runners every year. The 1980 inaugural race saw three runners complete the course.

This past weekend, 381 people lined up to start the race and 166 people crossed the finish line. Cody Priest from Anchorage, Alaska, was the first runner to arrive at Soldier Hollow, finishing with a final time of 21 hours, 24 minutes, and 5 seconds. Rebecca Rick of Salt Lake was the first woman to finish the race at 26 hours, 2 minutes, and 39 seconds.

People of all ages, shapes, and sizes gritted out a 100 miles of rugged trail in 90+ degree heat, faced sudden thunderstorms, sheltered at aid stations in pouring rain just before sunset, and trudged through the night, their headlamps casting long shadows across rocky trails.

Next weekend, another 300-ish runners will line up in southeast Logan, Utah, to run another of Utah’s prestigious 100-mile races: The Bear 100. And I’m going to be one of them.

This is going to be my first attempt at running a 100-miler, and I’ll be honest, I’m starting to panic. It feels almost impossible to wrap my head around running for 100 miles. Even after spending a handful of years in the “ultra scene,” and running a couple pretty solid 50-mile races, 100 miles has always felt to me like something entirely different.

The longer you spend around this sport, the more normalized the event becomes. You start to feel like you’re just one of a handful of people who haven’t run 100 miles. You volunteer at race aid stations, dumping ice water over racers during the heat of midday and ladling cups of hot broth in the middle of the night.

You watch friends and strangers cross 100-mile finish lines year after year. You give high fives at finish lines, and kudos on Strava, and likes on Instagram. You’d think this familiarity would make the 100 feel almost mundane, and certainly within reach.

Then you hear yet another friend talk about projectile vomiting at mile 73 without breaking stride en route to a strong finish and you wonder if all your friends are aliens.

Truth is, I was on track to toe the line for my first 100-mile race 5 years ago.

I picked up running as a hobby in my early thirties, and after a few years running road marathons I let a friend talk me into joining him on the trails. I was hooked. Getting up and out into the mountains and exploring them on foot made the 4:00 AM alarms almost make sense.

Then, one spring afternoon in 2016, while on a 20-mile run in the San Rafael Swell, I was lowering myself down a short ledge, grabbed the wrong section of cliff, had it break off in my hand, and landed the wrong way. I suffered a severe high ankle sprain and a mild avulsion fracture.

I got a soft boot and a “return to run” program that I completely ignored, determined to get to that 100-mile start line in September.

And, look, I understand this has become a hot take in some circles these days, but listen to healthcare professionals, kids.

See, without realizing it, my “hobby” had become something I started to use in order to define my sense of self-worth. I guess I should just come out and admit it now: I won a 50-mile race a month before my injury. I had enough sense to know that the only reason I won is because one of the countless much faster runners I knew didn’t sign up for that race, but still, it felt pretty damn good to win a race like that.

Then came the injury. I ran too much on my injured ankle, which flared up hip issues, which brought about IT band issues, and then I pretty much stopped running for the next five years.

I started telling myself that I was a failure if I didn’t run a certain number of miles each week. So once I was too hurt to put in that many miles, what was the point of getting out at all?

I couldn’t bring myself to sign up for another race because I knew it would just be a hard-coded timestamp showing just how much faster I used to be. I imagined the friends and family who watched me win a small little race down in Monument Valley in 2016 look at a middling race outcome and nod silently and saying, “Well, I guess he never really had it after all.”

Our brains can be such lying jerks sometimes.

It’s a fine line between challenging yourself and wrapping up your sense of self-worth with successfully meeting those challenges—and I’d allowed that line to blur into nonexistence. What had started out as a stupid hobby that I loved for a lot of ineffable reasons turned into something I could point to as physical “proof” that I was worthwhile.

Floundering career? Dating troubles? Stresses and anxieties of everyday life? I don’t need to worry about those, because I ran a race and did really well, and that means I have value!

The problem with tying achievement to self-worth is the threat of failure tends to paralyze you.

So I watched from social media, cheering on my friends as they finished 100-mile race after 100-mile race. I ignored invitations for long weekend runs. I balked when friends challenged me to race again.

I wish I could point to something simple as a turning point, a single thing that helped me uncouple the sense of doing something well with the sense of feeling worthwhile. But that’s just the trick, it’s not simple. It’s a lot of little things that I still have to work on every single day.

The good news is that this spring I allowed myself, for the first time since I started running ultramarathons, to sign up for a race and not worry even a little bit about how fast I’ll finish. The notion of crawling across the finish line in last place now feels like it’d be a true accomplishment instead of something that’d shatter my sense of self-worth.

4:00 AM, Thursday, September 9th. I turn off “Playtime” and climb out of bed. A few hours later I’m somewhere up Big Cottonwood Canyon, listening to a couple friends tell me how many waterproof glove shells I need to bring on race day (at least two), why I should consider trying frozen pickle juice (gross), and the art of getting in and out of aid stations efficiently (don’t dawdle).

They’ve run several 100-milers, and they’re being helpful and encouraging. I’m panicking and thinking about how much I’m struggling to get through this Thursday morning 20-miler and how impossible it seems to multiply that by five.

We finish the run and I feel that familiar combination of exhaustion, relief, satisfaction, and anticipation. It’s now time to taper and ease up on the mileage before race day.

I spend the next day watching the live tracking feed for the Wasatch 100, watching the top runners jockey for position from one aid station to the next. Checking on the status of runners battling cutoff times, stunned at their determination as they trek through the night. I scan the list of names and times and hope it makes me feel less nervous about my race.

But it does help bring that line between challenge and self-worth into sharper focus.

The Bear is now only a week away. I still need to sort out which food goes in which drop bag, buy a new headlamp, go over the course map a few dozen times more, and about two dozen other little things. I’m nervous and excited and terrified and unsure.

My friends keep telling me that proper planning makes all the difference in a 100-mile race, so I put down my to-do list, pull out my phone, and start scanning the list of iPhone alarm sounds. “Summit” feels a little on the nose, but it has promise. Guess we’ll find out next Friday at 4:00 AM.