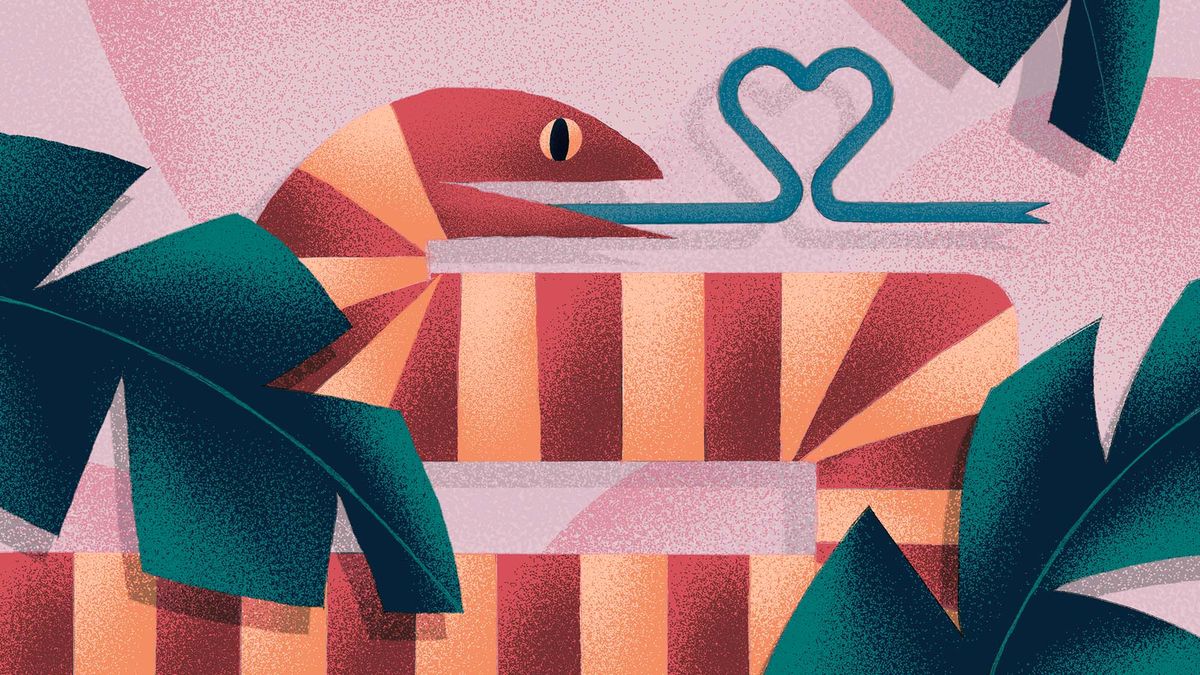 The exciting thing about the 2022 Reptile Nation Expo was the way it was plastered in all caps on bright yellow posters with very little detail up and down the Salt Lake Valley. Everywhere I went, I saw a poster for it. It reminded me of the Cavalia Era, the last real age of innocence. I was ready to sign up for whatever it threw down.

A lot of people are terrified of reptiles (I myself come from a long line of snakephobes, or ophidiophobes if you want to be spicy). As for me and my house, we primarily fear reptiles in contexts they have no business being in—like bodies of water. I watched Anaconda as a kid and to this day I can’t swim underwater at Bear Lake without panicking because the sound of boats crossing the surface sounds like a deep Paleozoic hiss beneath the waves.

Generally, I have no strong adverse opinions on reptiles, having spent my childhood catching tadpoles in ditches, scooping little frogs out of sprinkler boxes, and ditching Mason jars full of garter snakes on my extended family's doorsteps. As a socially-maligned introvert, the scariest part about the expo to me was, in fact, the parking lot.

It was almost 80 degrees outside, and every single person in Salt Lake City who wasn’t cruising around pits-deep in lycra was driving bumper to bumper in a long, snaking line through the Mountain America Expo Center parking lot. After near-missing several children and a hard-won battle for a parking spot, I had to walk what felt like a mile to get into the building. Once inside, I learned the line for people who got tickets online was four times longer than the line for procrastinators with hard cash. It was an injustice, but it gave me time alone with my imagination.

Part of me hoped the expo would be like a circus. There’d be women in leotards sitting astride lumbering komodo dragons. Maybe there’d be some kind of crocodile dunk tank, a massive aquarium in the middle of the room where participants could pay to throw cow thighs in and watch them get death rolled into oblivion. It would violate several laws, it would be horrifying, but it would be incredible.

The room had no tanks or circus rings or women side-saddling lizards. It was packed with people and rows of vendors selling tanks, pet food, kitschy gifts, and, of course, reptiles. It looked like any other convention hall, except that the vendors had live animals covering every surface of their tables. I wasn’t taken aback by the animals themselves, per se. What I was taken aback by was how they were packaged.

Thousands of airtight tupperware-like containers stretched from one end of the room to the other, filled with lizards and skinks and axolotls and pythons and frogs and spiders and scorpions, many curled up in balls on top of bark that—from a distance—looked like bread crumbs with sprigs of foliage garnishing the side. Snakes were tangled up in containers that had nothing else in them. The whole effect was like staring at sad, sentient soups or potato salads at the grocery store deli.

I passed an open-air storage box filled with tiny tortoises that got me excited until I realized what they were doing down there: unionizing, toppling over each other to press their little Jurassic feet against the walls of their Princeware penitentiary. In a box next to theirs, a lizard that looked strikingly like the ones from Holes glared up at me, communicating “apathy is no longer a choice,” with his eyes.

I’ve never really considered reptiles to be particularly worthy of love or rights, if I’m being totally honest, but less than five minutes into Reptile Con, I found myself radicalizing on the expo floor. I was ready to Blackfish this entire event, sweep my arm across every table until the entire room was a writhing pit of creepy crawlies freed from their captivity. But almost every subsequent table had a new, bizarre scene that made me quickly forget any thought of activism.

Still blinking away my unexpected introduction to the reptile prison industrialized complex, I meandered into a group of people sifting through a freezer that turned out to be a mass grave of vacuum-sealed dead rats lined end to end like bratwurst. People dug through that freezer like it was a bargain bin. Maybe it was—I don’t really know what the going price for dead rodents is these days. One guy was holding a sack of rats up to the light like a Mormon mom trying to determine if the shirt her daughter found in the Juniors section was too sheer. Tossed in the freezer like embryonic sacs were also bags of baby mice, pink and fetal and dead. I turned away and glimpsed a man gulping down chunks of pico de gallo and burrito from a tin, the combined effect of which was so obscene as to make me nearly dry heave on the expo floor.

Usually my favorite part of attending cons is observing the kinds of people who go to cons, but by and large the most interesting part about this con was the macabre carnival of snakes, dead things, and souvenirs. Once I got over the presentation and the very poor decision to park the rat freezer 50 feet away from the food, it was fascinating to see how many different kinds of crawly things there are in the world that you can buy. Striped and spotted, thick and thin. Axolotls and tadpoles. Tarantulas the size of avocados (ew) and frogs the color of Baja Blast.

At one table, a woman was selling ghost pepper jam and scorpion cookies. Another vendor had encased dead bats, flower petals, and butterflies in some kind of glass. There were even two scorpions bent together like stinger-crossed lovers in a heart-shaped rock.

The formaldehyde-dipped cherry on top was the guy in the back corner with a python around his neck who was selling skulls alongside jarred beaver, raccoon, and kitten fetuses. It was a weird collection of the worst things I’ve ever seen sitting side by side with the most fascinating: diaphonized rats and possums whose blue and pink-stained cartilage mapped their skeletons beneath their translucent skin. At this point, my stomach was a hardened rock, a veteran. I barely even flinched when a woman in cowboy boots next to me started talking to the fetus peddler in detail about shooting rats.

I moseyed around for several hours until I reached the booths in the back. At the back wall beyond the vendors was a small stage with a table on top. There were banners on each side that said “Safari Encounters” on them and had pictures of sloths and alligators. I got stoked.

I took my seat fifteen minutes before the show was supposed to start in front of a man whose shirt said “Straight Outta Quarantine.” I doodled a little while I waited, and about five minutes later, someone walked across the stage. I looked up and the rest of the world faded away. I suddenly thought I understood why everybody and their dog was at this reptile show.

This man looked so much like Chris Hemsworth that you wouldn’t want to tell him, “Hey, you look like Chris Hemsworth,” knowing it’s the only thing he ever hears from anybody ever and would automatically make you an incredibly boring conversationalist. His hair was tied half up at the back of his head, and he had a full beard. Both arms were sleeved in tattoos. I decided I was ready for any and all encounters that were about to happen in this room in the next ten minutes.

A woman with platinum blonde hair spilling down her shoulders (I think her name was Brandy) came out onstage and asked everyone if we were excited. The crowd gave a semi-tepid “yeah.”

“You guys need some coffee, come on,” Brandy said with a laugh.

After one more cheer, the show began. Thor: God of Reptiles (aka Daniel the Safari Guy) walked around the stage during the show holding six or seven toothy creatures for the crowd to look at. I think we learned what the difference is between alligators and crocodiles at one point and that it’s a bad idea to give your grandkids caimans as pets. Couldn’t truthfully say I remember any of it.

The showstopper was Macadamia, a massive, crusty snapping turtle that you could tell made everybody on stage a little nervous, even Safari Daniel. He walked out gripping Macadamia’s shell above the neck, his muscles looking only a little strained from the effort. I think my jaw came unhinged a little.

Two roads diverged in a yellow wood, and I kept one foot on both. I was nervously watching the massive snapper thrashing side to side in Safari Daniel’s hands, staring out at the audience through cold dinosaur eyes that screamed he would raze the entire earth if it meant never having to be touched or looked at by a human being again. At the same time, I was plotting an elaborate meet cute that involved a large pair of shears, an escaped caiman, me being trapped in a corner, and Best Western Chris Hemsworth (respectfully).

Ultimately, it was all for naught, as Safari Daniel was very taken and I was very a coward.

After the show ended, I decided I wanted to do one more thing before leaving: I wanted to hold a snake. It just kind of seemed like the thing to do, like taking a picture with a princess at Disneyland or cleaning The Sink at Angie’s. I’d already seen my share of corpses at this event. What was one more freaky sensory experience?

That’s how I ended up with a green and cream-colored ball python named Eros wrapped around my forearms. I didn’t get a picture with Eros—because his midriff cuffed both of my wrists—but Eros and I had a moment on that expo floor that Safari Daniel and I would never have.

His head bobbed up towards mine. He looked at me with small puppy dog eyes, his little tongue flicking out and tickling my skin. His belly flexed around my arms like a tight hug, and suddenly I started thinking it’d been far too long since I felt a loving touch because here I was standing in a reptile expo, surrounded by dead rats, hot Safari guys, beaver fetuses, spiders, and strangers, and I was getting emo at the attention from a python.

I’ve been looking up “snakes as pets” this week,  just to chew on it. I haven’t made any decisions, and I’m not sure I will. But when the reptile expo rolls around next year, maybe, just maybe, I’ll go adopt someone, even if they need a little pond to swim and hiss around in (shudder).

Who knows? I might free four or five tortoises while I’m at it.