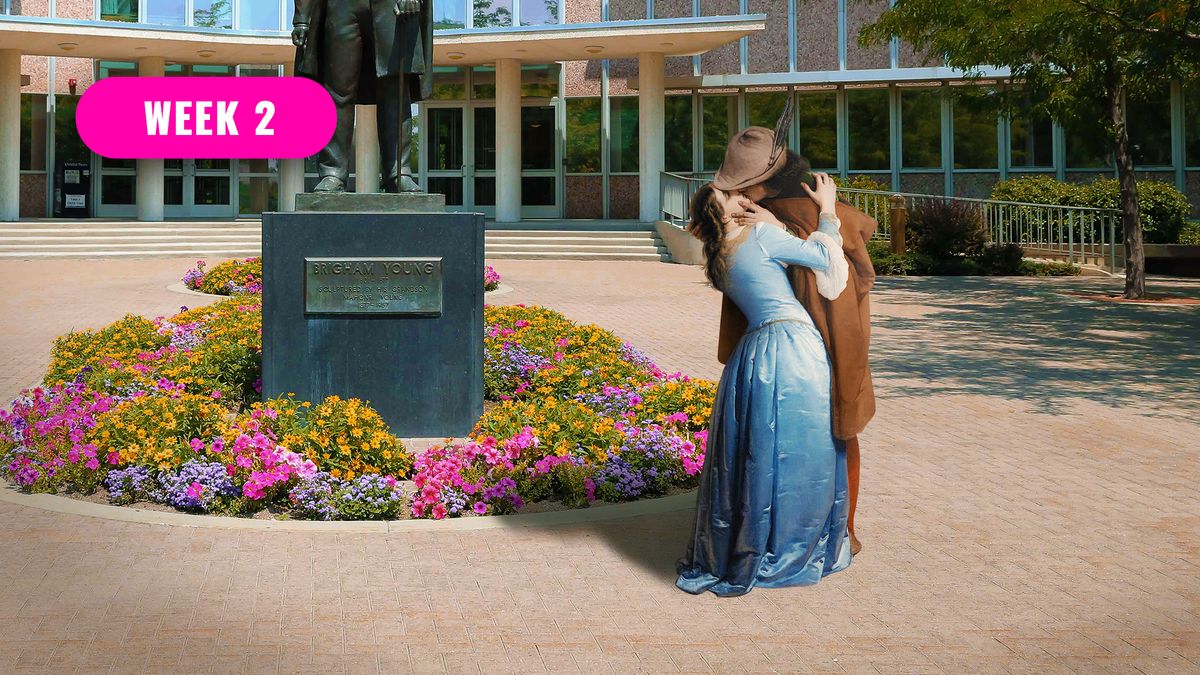 Hey, I’m Meg from The Beehive recaps of PME Season 1, and I’m picking up where Arianna left off with Week 2 of Season 2.

TaylorMaid is one of Provo’s weirdest spots. I found myself there often when I was a Provo resident because 1. it’s next to Joe Vera’s, our local Fiestaraunt and I would often kill time poking around in there while waiting for a table, and 2. they sell really good hairspray and OPI nail polish. But their bread and butter is costume rentals, which is why the PME gang visits, and the root of the biggest controversy yet, all of 2 episodes into the season.

I am 100% positive TaylorMaid now regrets having their name attached to this episode, as well they should. Because while the catwalks start innocent enough,

Come on, guys. You can, and should, do better than this.

I reached out to Remington, creator of Provo’s Most Eligible, asking if he had an apology for the cultural appropriation. Here’s what he sent me:

And now let’s all move on.

The fashion show lasts 7 times longer than it should. At some point Lauren and this tall guy get bored and sneak away:

The spot of grass where they sit is surrounded by three of Provo’s busiest streets so it’s hard to make out what they’re saying over the traffic noise. I'm reminded that this show is not made by professionals.

Lauren and tall guy return to the group, and I’m including this screenshot only because OMG DO YOU REMEMBER THOSE BACKPACKS?

Which means her team gets a special date.

First on the group date agenda: portraits of Bee.

Then they engage is some Sumo wrestling,

Which may not be as bad as donning a Native American headdress but also may not be great either?

And then they play Twister, because it’s not a Mormon singles’ activity unless there’s a game that facilitates entwining bodies.

Somewhere in the middle of these shenanigans there’s a debate over who deserves to wear a fanny pack. Really. It's between this guy, who is the OG fanny pack wearer:

Or Walker, who wore a fanny pack a day later, and is seen here photobombing what is clearly a steamy moment between the girl he is trying to date and another guy.

That’s the real improvement this season. There seems to be actual chemistry between some of the girls and some of the guys. Especially between Bee and Keaton, shown above.

Bee reveals to the camera that she’s interested in, and would kiss, a few members of Team Bee.

And “one in particular”

I wonder who it is.

Later in the week Bee, Ellie, and Lauren all take one guy on a date to do goat yoga.
This guy tried P90X yoga on his mission, so he considers himself a little bit of a yoga expert:

Believe it or not, this is the least egregious instance of a man claiming to be good at something after trying it one time THIS EPISODE.

Anyway. Goat yoga, as far as I can tell, is yoga practiced while goats stand near or on you.

As much as I love baby goats, are none of these people concerned they might soon have goat feces running into their ears?

Eventually things get intimate between the couples

And that’s that for the one-on-one dates.

Some day a while later (time is a construct and a complete mystery in the PME universe), it’s time for the “flower ceremony” as it’s being called this season to avoid any more lawsuits.

After everyone assembles, Lauren shocks the group with a surprise announcement.

She decided to bring back Caleb, who she dismissed last week.

Fanny pack guy is annoyed that Caleb has returned.

But he’s also annoyed another human owns a fanny pack, so like, who cares what he thinks about anything.

Before the flower ceremony the girls sit and chat with the guys one at a time.

We need to talk about what the youth of America are doing to their hair.

Are these hot looks? Am I too old to get it?

“I brought you some flowers because I know girls like flowers,” this guy says to Ellie.

A real groundbreaking Casanova, this guy.

Every time Ellie is on screen she looks like she’s pleading with us, the viewers, to rescue her. And for good reason. This child is 19 years old. She was born after Y2K. She belongs nowhere near a YouTube series whose logo uses a wedding ring for an O.

Plus, she has the weirdest interactions, like her conversation with this guy who tells her he wants to switch to her team:

His reasons are twofold: “We both like the film and media world, and we’re both good looking,”  he mansplains. Okay, buddy. If that's the criteria, Ellie and Brad Pitt belong together.

“Is this going to make me look like a jerk on the internet?” he asks a producer.

This feels like a question one should ask themselves before speaking words out loud on camera, no? Also, the answer to his question is yes, absolutely.

I’ve had the rules of the show explained to me a number of times but I still don’t really get it. I thought the girls chose the teams? But all the boys seem to be deciding whose team they want to be on?

Take Fanny pack, who whisks Lauren away for a drive and belts Love On Top with her, even though he’s on Bee’s team.

I am not going to learn any of these dude’s names until it becomes imperative to do so or until they prove themselves interesting enough to invest emotional and mental energy into.

Like Caleb. I know his name because of his dramatic reentry and because I think him and Lauren make a good couple.

On the other side of the golf course, Ellie is wishing death would just take her already.

Look at her face and tell me she is not wishing she were anywhere else in the world right now.

Quick note: If it's hard to follow all this jumping between the ladies and their teams, let me assure you, watching it was just as confusing.

Keaton and Bee, shown previously locking eyes on the group date, are the most compelling couple so far:

and if I don’t get to see them kiss at some point I’m suing Remington.

While Kea and Bee are vibing on a bench, poor Ellie is led to some abandoned corner of the country club so Scott, whose southern accent may or may not be fake, can force her into swing dancing.

Here’s her reaction when Scott turns on some big band jazz:

You know who does know how to swing dance? Lauren. Because she does it a lot. But this dude thinks he can keep up with her. Because he’s done it one time:

Meanwhile, things are getting intense between Bee and Kea on the bench.

“Somebody’s feelings are going to get hurt,” he tells her. It’s hard to know if he’s talking about his own feelings or her feelings, and it’s never clarified because they are interrupted by another guy. But if he breaks up with her, I’m done with this show forever. Just kidding. I said that after last season, and then exactly one (1) person emailed to ask if I was going to write recaps and I was like, “I can’t let down my fans!” when really I was just looking for an excuse to watch this show again because as much as I hate it I also love it. And I will never quit it.

Elsewhere, Glasses tells Lauren he wants to switch to her team.

He explains that Ellie, whose team he’s currently on, is too hard to read. It's something some of the other dudes have said as well. She’s not hard to read, though, guys. She’s clearly just hating all of this.

And again, who can blame her, when the men on her team insist on showing off their mediocre talents and expecting effusive praise? I’m sure the moment she saw the ukulele strapped to this guy's back she wanted to scream:

Because there’s only one thing worse than being sung to by a group of TGIFriday’s waiters on your birthday, and it’s being serenaded one-on-one by an earnest young man with an instrument. Where do you look? Do you dance? Do you sing along? Do you pretend to like it? There’s no natural reaction and it’s one of the worst things that can happen to a human.

tells Bee that Walker, with the hair that looks like the younger brother in Rick Moranis’s neighbors’ family in Honey I Shrunk The Kids:

has been bragging about how many girls want to date him, which seems counterproductive because typically girls are more interested in someone when other girls also seem interested in them, so why is burgundy jacket making his competition sound more desirable?

And Lauren reveals that she was previously married. Caleb is great about it and I legit stan this couple.

I don’t remember the context and I refuse to rewatch the episode to find it, but for some reason Scott says he disagrees with Keaton, who is "on the left."

“I do enjoy political discourse,” he says. That’s such a weird thing to say in 2019 when the political system is practically melting into a puddle of goop right before our eyes. The only people enjoying the discourse are certifiable psychopaths. I'll confess that I looked up Scott on Instagram and was not surprised to find a photo of him in a MAGA hat.

The girls start doling out flowers. I’m too distracted by the visible plug and outlet on the wall to pay attention to the first part:

But then things get interesting when both Lauren and Bee step forward for Fanny pack, indicating they want him on their team.

Then, both Bee and Ellie step forward for a guy whose name I forgot, and he chooses Ellie.

The rest of the men are divided equally until there are four men left without flowers and sent home:

Jerk on the internet,

Sorry to these men.

Arianna and I will be enjoying(?) and recapping the rest of the season, so tune in again next week's recap.