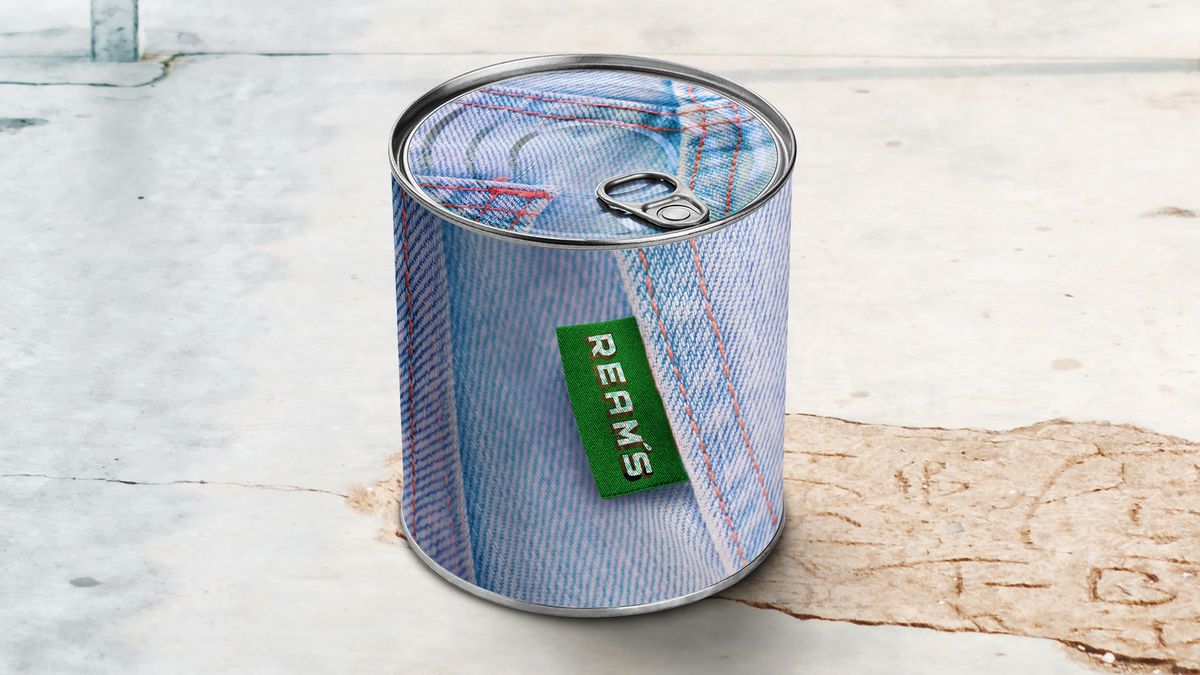 There's a grocery store chain in Utah called REAMS, and this place is a trip.

First of all, this is what it looks like on the outside:

No, that picture is not from the early 80s. I took that picture yesterday. As in 2019. As in yesterday 2019. That is what REAMS and the cars parked in front of it look like now.

There was a REAMS down the street from my house when I was growing up. It was our go-to store. Why wouldn't it be? In one single stop you could buy cantaloupe, one of those giant rainbow jawbreakers, and jeans.

Side note about the jawbreakers. These were the childhood version of knitting for me. In 2019, I knit while I watch TV. But in 1990, I licked these jawbreakers into diabetic oblivion.

They took weeks of concerted dedication to get through. The outer layer was made of some kind of milky powder substance. This was probably the most challenging section to penetrate. I would usually already have several sores on my tongue by the time I even got to the orange subsurface.

We would keep these in sandwich baggies that eventually collected our blood and dried spit as we held the candy up to our mouths and vociferously licked away to a rerun of DuckTales. Woohoo.

Well I don't know about your family, but in my family we got these jawbreakers from REAMS. They were displayed, unwrapped, in a large pile next to the video rental section, which exclusively contained VHS tapes of three or four episodes of children's television shows and straight-to-video low-budget family films.

My family, who isn’t normally into crime, accidentally stole a copy of the cinematic masterpiece “The Jetsons Meet the Flintstones” from the REAMS video rental section. At least, it was kind of an accident. We rented it so many times from REAMS that we finally lost it. REAMS started calling our house every day asking when we were going to bring it back. My family 100% got caller ID for the first time just so we could dodge REAMS. They finally gave up. We found the video a year later and thought about bringing it back but decided too much time had passed and it would have just felt awkward at that point.

That wasn’t the first time I had stolen from REAMS. On a prior occasion, at age 5, I took a yellow piece of hard candy from a candy jar at the checkout while my mother wrote a check to a woman sitting on a stool. I was caught with the candy just as we pulled into the driveway at home. My mother drove me back to the store and asked to see “THE MANAGER” so she could turn me in, hoping he would give me a firm lecture. He showed up a minute or two later, his tie tucked into his pants, and informed us I hadn’t actually stolen the candy because it was customer appreciation day and they were giving those out for free at every checkout line.

Wounded, but undeterred, my mother then told me, as she dragged me back out to the car by my ear, “THE MANAGER told me to take you straight to the POLICE” as though I had not been there to witness the whole interaction. When we got to the police station, she told me to wait in the car while she went inside (presumably to stand in the breezeway) to see if she could persuade the police not to put me in “JAIL.” She returned 5 minutes later bragging about her negotiation skills and informing me she had brokered a deal with the authorities. In all of the commotion, which took a good portion of our afternoon, she forgot to take the REAMS candy away from me.

I have a nearly infinite amount of memories like this, so vivid it almost feels as though REAMS was one of my siblings.

The store smelled like if Wonder Bread was baked in an old library. The linoleum floor was a dull yellow, and there was always sad country music blaring through the crackling ceiling speakers.

But back to the jeans. "REAMS jeans" were regularly referenced in my house in threat form.

"If you don't take better care of your clothes, I'm going to drive down the street and buy you some REAMS jeans to wear to school tomorrow."

I would describe REAMS jeans for you, but you already accurately pictured them when you read the words "REAMS jeans."

They were not flattering on any human body.

You might think I'm joking about this grocery store selling jeans. I'm not. I just looked it up. REAMS has a website. On the "About Reams Food Stores" page it boasts: "We are now the largest western wear dealer in Utah," selling such "non-foods" as "boots, western, casual and work-wear."

Eventually I moved away from my parents' home. I grew up and changed. My parents changed. You changed. Everyone changed. Except for REAMS. REAMS stayed exactly the same.

The same selection of movie rentals.

Last month I decided to can spaghetti sauce, but to my absolute frustration, I suddenly couldn't find my canning supplies when I needed them on a Saturday night at 10:00. I ripped the house apart looking for them, but they were nowhere to be found. So I called my mother to ask her what I should do.

"REAMS. They have the best canning supplies."

A sore immediately formed at the end of my tongue as I inexplicably started smelling bread and dust.

I hadn't heard the word "REAMS" in nearly 20 years.

"Is that even still around?"

I googled it and discovered there was a REAMS only a couple miles from my house, so the next morning I drove to it at 9:00 AM.

I walked inside and passed the jeans. Tim McGraw's "Don't Take The Girl" was vibrating from above. An elderly woman who had handwritten her shopping list on a long roll of receipt paper was maneuvering her Jazzy through the sliced bread aisle. A man wearing a black cowboy hat was fishing through a bin of $1 Christian DVDs.

I found my canning supplies and took them to the one checkout that was open.

A child was sucking on one of the rubber dividers used to separate groceries on the conveyor belt the employee was moving with her hands. The child's mother turned and saw this, telling him to "stop," and then gesturing toward me, "so that man can use it." Not "because that's disgusting" or "because that thing is covered in diseases" or "because people need to touch that."

I paid for my canning supplies and thanked the employee, who was wearing a badge that said "Marge: 35 years of service."

I took my things and drove home, canning, calling my mother to ask for tips and advice for my struggling domesticity, and unconsciously humming the melody to Deana Carter's "Did I Shave My Legs For This."