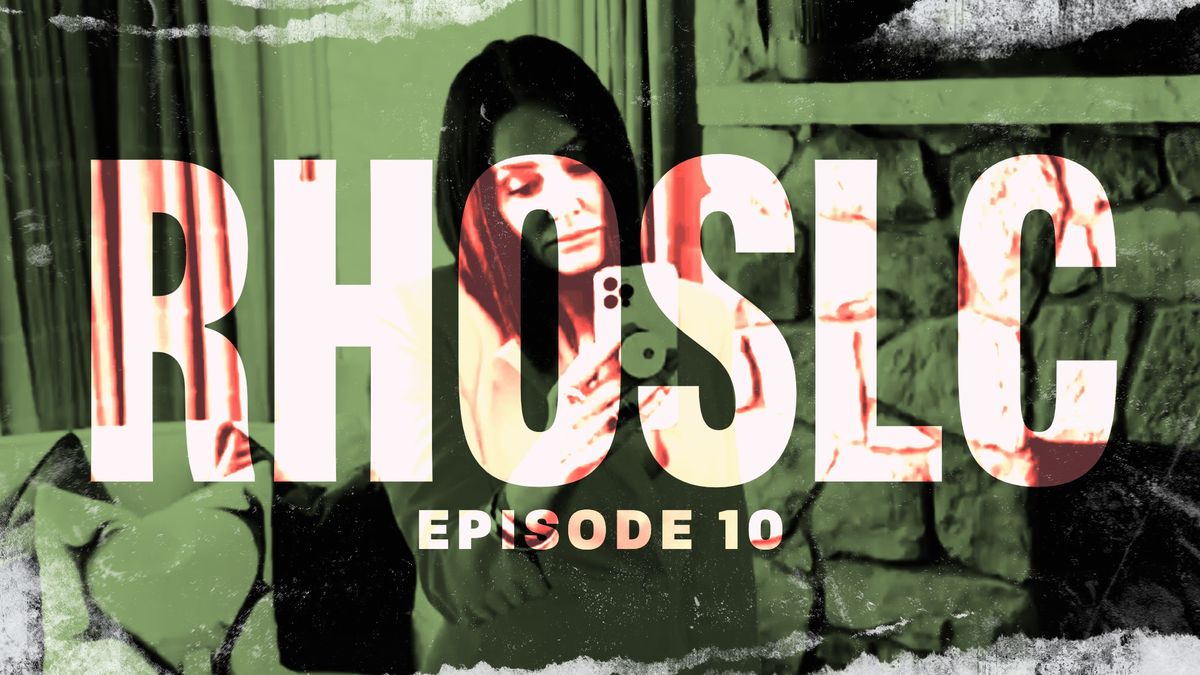 We left off last week with NYPD officers, a SWAT team, and Homeland Security officials swarming the Beauty Lab parking lot looking for Jen. She’s on the run, and Heather, Whitney, Lisa and Jennie are left in the party bus to pick up the pieces—and put them together.

The first thing we see in this episode is “9:33 AM” flash across the screen in bold Helvetica and I knew we were in for a cinematic masterpiece. Timestamps. Are. My. Shit. This isn’t any old episode of The Real Housewives. It is a true crime docudrama.

Lisa announces she’s going to call Jen’s assistant/(alleged) actual-partner-in-crime, Stu. Mid stress-snack, Heather calls Jen and sends her a text to let her know the cops are after her. Yeah, I think she knows.

For how quick Heather is, she’s refusing to get it. She reiterates that the officers said they just wanted to talk to Jen to “see if she’s OK.” Whitney doesn’t buy that. Jennie wastes no time and goes straight for Jen’s snacks:

At first Heather says, “The woman just had to evade arrest! Don’t be going through her personal items!” Lisa says, “I don’t think she’s coming back,” as she pillages a pack of Life Savers mints.

However, Heather is easily persuaded by the loot:

And with that, they pull away from a strip mall parking lot that will forever live in infamy. They’re off on their six-hour road trip to Vail.

Meanwhile, Meredith arrives at the rental home in Vail to meet an “experience curator” in a bold daytime hat.

Back on the bus, it’s 10:57 a.m. and Heather—still not getting it—is surprised she hasn’t received a text back from Jen. Whitney is doing all she can to get it into Heather’s skull that Jen ain’t texting back.

They wonder how the feds knew Jen was at Beauty Lab and they suggest someone associated with the show tipped them off. But why are they so sure? Jen was part of a huge multi-state fraudulent scheme. This is bigger than Bravo.

Jennie says they must have a warrant to be able to confront Jen at Beauty Lab. Lisa takes a call from her husband John and she’s been talking to all of her six (!) attorneys on payroll. Sneakily, almost as if she isn’t already wearing a mic, she says:

When previews hinted at Meredith cooperating with the feds, I thought it was just to stir up press. I was very surprised to hear Lisa suggest there might actually be something to the rumors. While Lisa talks to John, Detective Whitney looks on incredulously, suspicious of how Lisa’s reacting to the situation.

Whitney explains that Jen’s business is lead nurturing and she’s always had a lot of questions about how Jen afforded her lifestyle. They stop somewhere near Price and Whitney says to Heather:

“She’s called all of her attorneys.” Heather says, “If she knows stuff, that means she’s implicated.” Welcome to the conversation, Heather. Whitney says, “She keeps saying someone tipped them off.” From a helium balloon on a stripper pole in season one, Whitney has transformed into the voice of reason and Salt Lake’s number one private eye.

Suddenly, Whitney freaks out and reads the incoming news from her phone: “Real Housewives star charged in massive fraud and money laundering scheme.” She looks delighted. Lisa and Heather burst into tears. Whitney sends them the link to the article, but apparently Jennie wasn’t on the group text:

Trying to make heads or tails, Jennie asks if anyone had a clue that Jen was involved in shady business. Whitney says she assumed Jen had a sugar daddy:

Everyone is reading the news, trying to make sense of the charges. Thankfully, Detective Whitney explains that Jen was buying the data of elderly and vulnerable people and selling them “fake shit” by roping them into credit card scams.

Jennie thinks it’s weird that Whitney knows so much about this and I don’t. Whitney is a new-money business owner in Utah who is very online. The entire economy in Utah is sales. From the tech to the marketing to the missionaries, everything is sales.

Our next timestamp is 1:20 p.m. in Park City at Jen’s house. We have Ring cam footage of Jen’s son and nephew being escorted out of the house by armed officers. It was upsetting. The cameras show production talking to police who say they can “reach out to Mr. Shah” if they have any questions, which means Sharrieff isn’t part of the investigation.

The ladies call Meredith to see if she’s heard the news. Meredith pretends to have heard nothing of the arrest. There is NO WAY Meredith has not looked at her phone in over an hour.

I know her Botox isn’t allowing for a lot of pretend emotion, but she could have tried a little harder to act shocked after hearing her friend was arrested and charged with fraud by armed officers. Whitney basically yells at her to get a reaction:

It doesn’t work. Meredith says, “Honestly, I’m not surprised by this” Meredith says she feels “validated” by this information because no one “really wanted to listen or believe me . . .”

Lisa ends the call and says, “It sounds like she knows more than all of us.”

At 3:16 p.m. we get our only glimpse of Jen this episode when she’s leaving the courthouse in her now signature box braids and fur coat. Back in the bus, the women discuss why there were money laundering charges and Whitney has a crack in the case. She thinks Jen was always starting new businesses to dump cash and write it off as losses on her taxes.

There are other Housewives with other legal issues that I’d love to have Whitney comment on. What are her thoughts on Erika Jayne? Teresa Giudice? I find it curious that the Housewives who have been involved in alleged fraud are the ones who have most garishly flaunted their wealth.

Lisa says, “It’s not a game of Clue. Jen is not in the library with the lead list.” And that’s a funny line, but then she follows it with:

Lisa is gonna do Lisa. She asks why Whitney knows so much about washing money. I think Lisa is defensive because we know someone else who starts many new businesses . . . I’m looking at you, Fresh Wolf.

At 4:13 p.m. Mary arrives at the vacation rental in Vail. She looks around the house and Meredith is nowhere to be found. She hears an unusually saccharine voice, follows it, and finds Meredith with a bubble beard in the bathtub.

We haven’t come to anticipate behavior like this from the buttoned-up (yet cleavage revealing) Meredith. I, for one, would like to know Meredith’s Xanax dosage . . . for a friend. Mary isn’t amused and says she expects proper “eti-kwet” from a host.

Mary says she first heard about Jen’s arrest from Robert Sr., but of course she didn’t believe him till she saw the news herself. (She despises that man.) Mary says, “Meredith couldn’t have cared less,” about Jen’s situation. She tells Meredith to get out of the bathtub, but Meredith continues to sit in her own pruny filth and pours in more bubbles.

They find Meredith still in the bathtub. This is simply too much bathtub time. I need a timestamp for how long Meredith has been in the tub.

The ladies settle in:

They call their husbands so the husbands can explain legalese because women dumb dumb no understand hard words. Most intriguing is what Mary has named her husband/step-grandfather in her phone:

Then, they gather for dinner and get down to business. Whitney says she heard  the authorities had a ping on Jen’s phone and arrested her on the side of the road—that she didn’t turn herself in.

Mary says Jen is reaping what she sowed. Interesting statement coming from Mary, who I would advise to not throw stones.

Meredith recounts that several months prior, Jen’s assistant stole a clutch from her store. Meredith is angry that Jen didn’t fire this assistant immediately. Fair enough. She also reveals that she heard Jen is flagged in Louis Vuitton’s system because she pays in cash. More than everything else that has transpired today, Mary is shook by this news:

Puzzle pieces are lining up in the way they’re not lining up. Heather says the other night she put Jen in an Uber and Jen got out of it in the middle of an intersection. Strange happenings. Lisa wants to know what day and when, which sets off Detective Whitney’s spidey senses.

When they press Lisa she says she needs to “check with somebody to see if they met up with her.” It’s very cryptic. Whitney plays good cop:

Her interrogation tactics work and the last shot of this episode is Lisa’s face crumpling into tears.

In scenes from next week we see dog sleds, Mary falling asleep mid-confrontation, and the Housewives fighting in costume—a favorite trope of mine. Don’t miss Meg and Emily break down the explosive drama on Hive Mind’s weekly RHOSLC recap from The Beehive.

Will The Real Michael Jordan Please Stand Up?