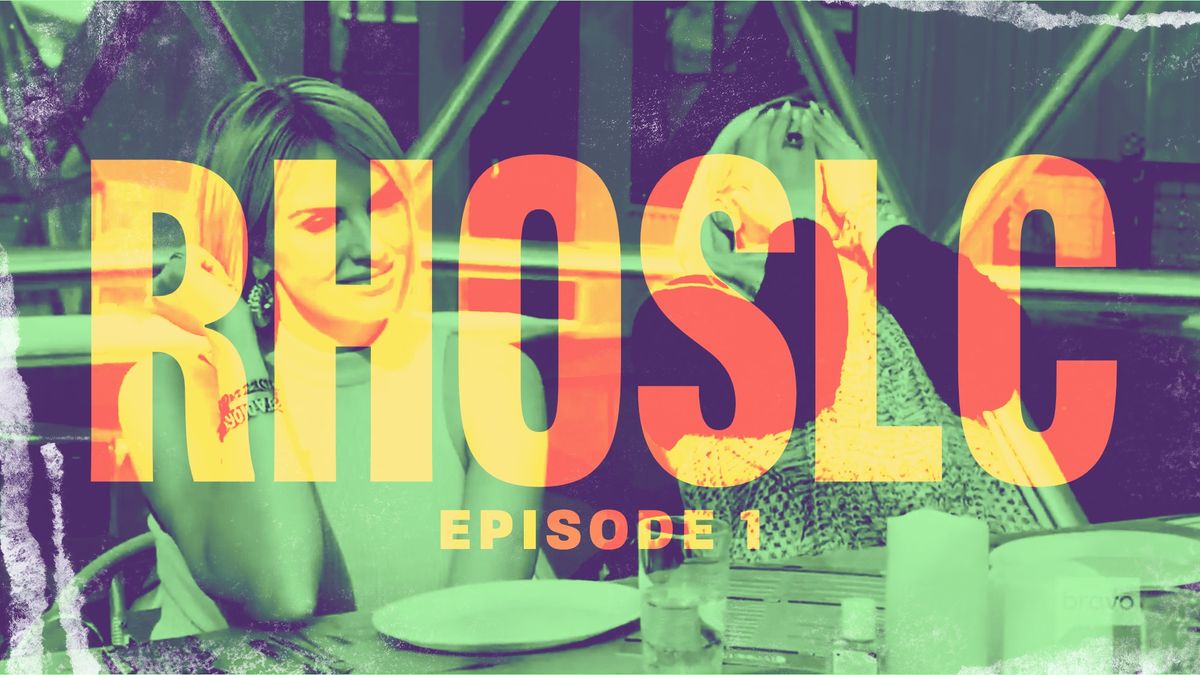 Like Jessie Spano applying to Stanford and turning to caffeine pills, I’m highly caffeinated and SO excited to be recapping RHOSLC this season for The Beehive and also so . . . scared. Specifically, of the housewives. Because y’all already know they have Google Alerts for their names!! There’s not a chance in Whitney’s dad’s wig that these ladies don’t get spidey senses in their implants when someone but whispers their names across time and space.

I am here to watch this show so you don’t have to—although you definitely should—and to talk some good ole fashioned shit. I am genuinely scared of these women and I plan to be shady the way God intended: behind their backs.

So when I foolishly agreed to attach my name to these recaps, I considered reaching out to Mary Cosby who apparently feels secure enough to vow: “If you come for me, I will send Jesus after you.” This is perhaps the most bizarre tagline in recent memory, and I’m still pondering the meaning of Erika Jayne’s from five years ago:‌‌

Now, I didn’t realize Jesus worked that way. But Mary seems to have something...special(?) with all the men in her life, including the grandpa she married, so why not The Big Guy Upstairs too?

Season 2 opens by flashing forward two months to March 30th—the very day we’ve heard about in the news for months. There, we get potentially some of the most riveting two minutes in reality television history. We witness the exact moment Jen’s soul left her body and it’s confirmed that there were cameras filming when the feds rolled up to Beauty Lab + Laser’s strip mall parking lot asking for Jen Shah.

When we flash back to two months earlier, we’re in Park City to get reacquainted with Jen and meet her new Shah Chalet 2.0. It is a linguistic tragedy that she does not call it the Shahlet. It was right there.

She has assistant #2 in the kitchen doing what he calls a “choppy chop” of some citrus for our Diet Coke queen Lisa, who’s coming over for an unfortunately timed tour of Jen’s new shoe palace. Not a great look given her legal situation. (I see you, Bravo editors.) Lisa loves it.

Jen tells Lisa about how she and Coach were on the brink of divorce last year because of her anger issues. Lisa has recently leaned into her friendship with Jen, which is the central issue in this first episode.

Elsewhere in Park City, Heather apparently skis up to Meredith’s new place and she really wants us to know she was skiing because she doesn't take off her goggles the entire scene.

Meredith is feeling hurt by Jen who has been a disaster on social media during the offseason and has oft retweeted and reposted about Meredith’s son, Brooks’s, sexuality. Last season Meredith gave us nothing by “disengaging” from anything uncomfy or adversarial.

But it was like, babe, you are a real housewife. The titular role! You gotta step it up. I have a feeling she’ll be choosing to engage on this matter for Brooks and for her future on the show.

For the next stop on our tour de Housewives we waft over to Daybreak to check up on Whitney and her Mt. Oquirrhs. Whitney and Justin are having a birthday party for one of his adult sons, all of whom we get to meet in a Mormon wedding line style of hot stepmom boob-to-chest hug action.

She affirms what we all assumed—it is weird that Justin’s sons are just a few years younger than her. And what’s a great way to forget about uncomfortable age differences? Shots.

Then comes my favorite family birthday party activity: a foam hot tub party. Whitney gets an I Love Lucy moment where she’s so drunk and slippery from the foam that she repeatedly drops a flaming birthday cake on the floor and tries to salvage it. This was the best physical comedy bit I've seen in years.

I have a soft spot for Justin and Whitney and *cried* during last season's reunion when they talked about their love. I found myself thinking, “Hell, I love these crazy kids,” during what seemed to be an incredibly dangerous birthday party.

We then visit Mary. Oh Mary. I am deeply uncomfortable with the chaotic, unstable energy Mary is bringing us, which is why she’s a great Housewife, and also why she’s veering on the edge of irrelevance. These shows do not work well when people cannot relate in the least to a cast member. Mary seemed to film the entire last season from her closet, and I was assuming she’d be relegated to a “friend of” this season while peering out from behind a feather boa.

But alas, she’s back with a Housewife trifecta of some tweaks to her face, a new podcast, and a level of narcissism yet to be addressed with a licensed professional. She tells us that during the pandemic, her husband—or step-grandfather, whichever you prefer—Robert Sr., “got stuck” in Florida and she spent months alone talking to the mannequins in her closet.

I don’t find dunking on Mary to be very fun because I believe her to be deeply troubled, and once again, I am scared of her and her status as an ~alleged~ cult leader. When she talks, mostly I just feel like Selina Meyer:

Next we bop over to meet Jennie, the newest Salt Lake Housewife who comes to us by way of Lisa Barlow. Jennie seems fun and interesting, with an incredible story of escaping Vietnam as a child in the bottom of a fishing boat. She has a very cute family with a precocious daughter and chiropractor husband who seemed nice and pleasantly handsome, but who she—without guile—basically called ugly. Which was a new one for me as a long-time Housewife watcher. This bodes well for Jennie and her Housewives career.

Heather, Whitney, Meredith, and Mary reconvene in an igloo for a meeting of the minds and filming schedules. These are four people who would never in a million years interact or cross paths in the wild. They’re operating in four different orbits in northern Utah: Heather in Midvale, Whitney in Daybreak, Meredith in Park City, and Mary in the nightmarish closet of her own making. But here they are, sharing breath particles with each other in an unventilated, humid Covid trap.

Heather orders for the group, and she’s at her best when she’s easy, breezy, and off the cuff. I think she got a little big for her britches when she became the cast favorite last season. She’s holding the snowflake at the center of the opening title sequence, but this is the Heather I love: “If I wait on these ladies to choose, I’m going to be sharing a side salad with Mary, and that’s not the lunch I want to have.” I concur that there’s nothing worse than getting peer pressured into sharing food. Respect.

They talk about how Meredith doesn’t want to mess with Jen until she apologizes to Brooks, and rightfully so. What she’s not saying is that she doesn’t want to be friends with Jen at all, ever, but they’re on a reality TV show together and so they have to at least come to a stasis.

For our final leg in this premiere episode, we touch down once again in Park City with Meredith where she and Seth have invited the Barlows over for shabbat dinner to mend their friendship and memorialize Meredith’s father who recently passed away.

Lisa arrives in a pair of practical stilettos for the snowy evening. Something non-Utahns don’t understand is that people in Utah do not wear winter shoes. This is not a thing. It was shocking to arrive in Utah for college where my mom had sent me a pair of legit snow boots only to see people trekking around campus in the snow wearing literal flip flops. I’m pleased to see that Lisa observes this cultural tradition.

Meredith and Lisa sit down to talk through their issues only to have it escalate and go nowhere. Meredith feels betrayed that her real life friend Lisa is pursuing a TV friendship with Jen despite Jen’s insistence on attacking Brooks.

Lisa thinks her issue with Heather about knowing or not knowing each other in college can be equated to Meredith and Jen’s issue about Jen being homophobic online toward her son. This is an entirely fair point coming from Meredith. What’s not fair? That someone talked Meredith, a grown woman, into this confessional look.

So for now Lisa and Meredith are at a standstill, though they politely break challah bread together while Lisa’s 16-year-old son stands by in a delightfully strange sweater for someone in his demographic.

Scenes from this season include nefarious legal woes, cult intrigue, and watching the women’s faces trying to move beneath all their feelings and fillers—fills and fills. I can’t wait.‌‌‌‌