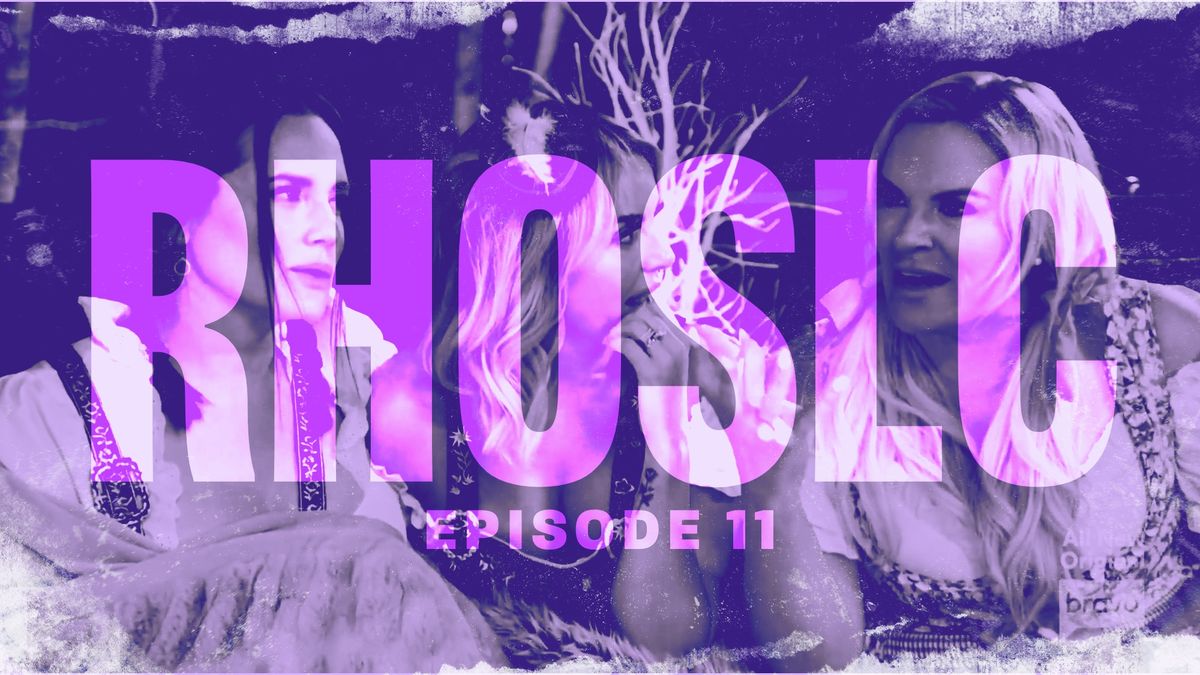 Last week’s explosive episode ended with Heather sharing that she recently put Jen in an Uber late at night and saw that Jen got out of the ride in the middle of an intersection. Everyone is wondering who or what Jen was up to. Lisa opens this episode by saying cryptically, “And I just think she was meeting up with somebody other than her family.”

The ladies are frustrated that Lisa doesn’t say what she knows and what she doesn’t. Lisa likes to think she can play producer and Housewife without getting her hands dirty. But babes, you are a Real Housewife. You’re down in the muck with the rest of ’em.

The ladies are piecing together the inconsistencies in Jen’s life that are sounding preetttty consistent with someone who might, I don’t know, defraud the elderly. Meanwhile, Mary has drama of her own as she cuts her mouth on a tortilla chip:

Lisa sobs into Meredith’s sterile robot sternum and Meredith pats her on the head with her 50-pound mimetic polyalloy hand, only slightly concussing her from the impact. Lisa is desperately trying to distance herself from Jen, whom she was buddying up to in the first half of the season.

She asks the group, “Have you guys gotten weird text messages?”

In a confessional Lisa says, “Last year, after Vegas, Jen felt very traumatized. Around the same time I received a text message and it was really disturbing to me.” Go on . . . “But there’s one word in the text that really stood out to me:”

Um, excuse me? I rewatched this about 12 times because 1. It’s hilarious. 2. It doesn’t make any sense. Using abbreviated textspeak and calling it “vernacular” as evidence against Jen’s behavior feels a little racist . . . but what do I know! Jen has displayed a lot of damning behavior, but this ain’t it.

Meredith reveals she hired a PI to investigate Jen after she cyberbullied Brooks. She asks the table, “Who here wants to be friends with Jennifer Shah moving forward?” The ladies look scared of her. As they should be of a powerful cyborg.

Heather gathers enough courage to say, “She is my friend . . . and I think the only true value of friendship is when you’re down, you know?” But Meredith tries to knock Heather off her moral high ground:

Heather replies, “I would absolutely visit her in prison because it’s horrible. She’s going to prison.” A fair point. With an unsettling amount of emotion across her face, Meredith yells, “Can we talk about the hundreds of lives she’s ruined through her actions, and I’m supposed to feel bad for her?!” Also a fair point. Allegedly.

Then Lisa starts repeating Meredith and Meredith is yelling over Lisa and my eyeballs were wobbling back and forth in my head like a cartoon character trying to distinguish one angry brunette from another:

Meredith settles down with a line reading and a facial expression that’s been haunting me since Sunday night:

Heather begs the women to give Jen a chance to change. Mary, a forgiving, God-fearing woman, has another idea:

Whitney says, “Jen owes it to every single one of us to tell us the truth about what she’s been up to.” I know there’s a certain level of narcissism prerequisite to Real Housewifery, but Jen has many, many others to answer to before her coworkers.

Meredith reiterates that she doesn’t want to be friends with Jen. We get it. But at some point Meredith is going to have to reconcile that she’s filming a reality TV show with this woman. We already have Mary who clearly does not want to be anywhere but her own closet, and we simply can’t afford another reluctant Housewife. This is showbiz, kid.

The next morning the ladies are cooking breakfast. Whitney makes herself an egg and Mary passive aggressively asks her, “Are you only doing them for yourself?” In a confessional she says, “Even though Mary is treating me like shit, I’m still going to make her eggs because I’m a nice person and I can’t help it.” As an oldest daughter, I understand. However, Whitney’s nicety is wasted on Mary:

Next, Lisa and Meredith sit outside for a meeting of the brown hairs. In season one, these two were presented to us as real friends and a package deal, but now there is a rift bubbling beneath the surface.

Meredith is uncomfortable with the gossip surrounding Mary’s church. She’s trying to make Lisa own up to inviting Cameron to the Fresh Wolf event in order to plant the storyline about Mary being a cult leader. Which is an absolutely bonkers sentence. Lisa doesn’t want to admit anything, but she is running into her own machinations.

Finally Meredith asks, “What are you trying to say, Lisa?” Lisa says she’s not trying to say anything, which she really isn’t because she doesn’t want to be pinned down on camera as the planter of the rumors.

Visibly annoyed, Meredith says she’s just going to tell Mary what’s being said about her. Lisa looks scared, but I’m not exactly sure who she’s scared of. Mary? Cameron? Jesus? Meredith? The actual producers who are going to tire of her thinking she can do their jobs better than them?

While The Not Fun Ones (Lisa, Meredith, and Mary) go shopping and wear the perfect outfits to blend in with the locals:

Lisa says Vail is chic and quaint. Mary is trying to find the words to describe it until she settles on:

Then they go to an ice skating rink where they remove their insane coats to reveal very sad looking ice skating leotards. Is this a bit? The Not Fun Ones were never gonna pull this off. They don’t have the physical comedy chops of, say, a Whitney. I’m not going out on a limb here to say that not a’one has the natural charisma or commitment of a Heather.

On the bus ride back, The Fun Ones discuss Lisa:

Heather says that on the ride to Vail after Jen’s arrest, it was the Lisa Barlow show and she was only worried about herself. She says, “Lisa likes to make sure the water’s always stirred up and muddy, but she does not wanna get her hands dirty.”

Jennie says Lisa withholds information because she doesn't want to be wrong. Whitney makes up a little ditty—“Lisa Barlow, stop sitting in sorrow:”

Back in Salt Lake, Jen has a lack of self-awareness so deep that she meets with her attorney ON CAMERA THE DAY AFTER HER ARREST. Let’s take a beat, baby girl. I’m not so sure Jen’s show must go on.

Jen tells us it wasn’t Sharrieff on the phone but someone using his phone when she was tipped off before her arrest? I’m not buying it. She has pled not guilty to both charges of wire fraud and money laundering because:

The ladies are back from their various winter activities and dressed in costume, for better or for worse:

Lisa and Jennie try to make yodeling their thing:

Mary talks to herself in her room:

And there is sexy cheese footage:

Mary could not make it clearer that she does not want to be there. She’s walking around like a Swiss zombie in Chanel. I’m officially ready to move on from Mary. Crazy is one thing. Crazy without any self-awareness is another. Crazy without being any fun at all? No thanks. The ladies take shots, but Mary is in the mood for something more substantial:

Whitney breaks out her shot-ski and Mary mutters under her breath how much she dislikes Whitney. In all my many years and many hours of Housewives watching, I’ve never seen someone care less about being a Housewife. Get this woman to bed! Mary need night night!

Finally, Mary goes to sleep and Whitney, a little drunker than before, keeps talking to the group about her:

. . . She takes a drunken, pregnant pause that is no less than ten seconds. And then she rolls her head a few times for dramatic effect:

Whitney says that Cameron, the former pastor at Mary’s church, told Meredith to “be careful.” They ask why Cameron was even at the party, but Lisa takes zero ownership and says they should ask him.

The ladies smell blood in the water and keep pressing Lisa for more information. She says Cameron has “extreme religious trauma," and Meredith yells, “All these insinuations are being made that are way more damaging, I would guess, than what the truth is.”

Here we finally see the group’s social hierarchy for what it is: Meredith is the Alpha of the group. Lisa has to cave to retain any clout or relevancy—she blurts out: “He mortgaged his house and gave her $300k.”

With Detective Whitney on the case, we may very well find out there’s more to the story. But I’ll bet this story is not as much about Mary’s cult-leader status as it is about Lisa Barlow’s status within the group. Until next week, don’t miss Meg and Emily break it all down on Hive Mind’s weekly RHOSLC recap from The Beehive.

Apparently Real Salt Lake Is The Team of Destiny