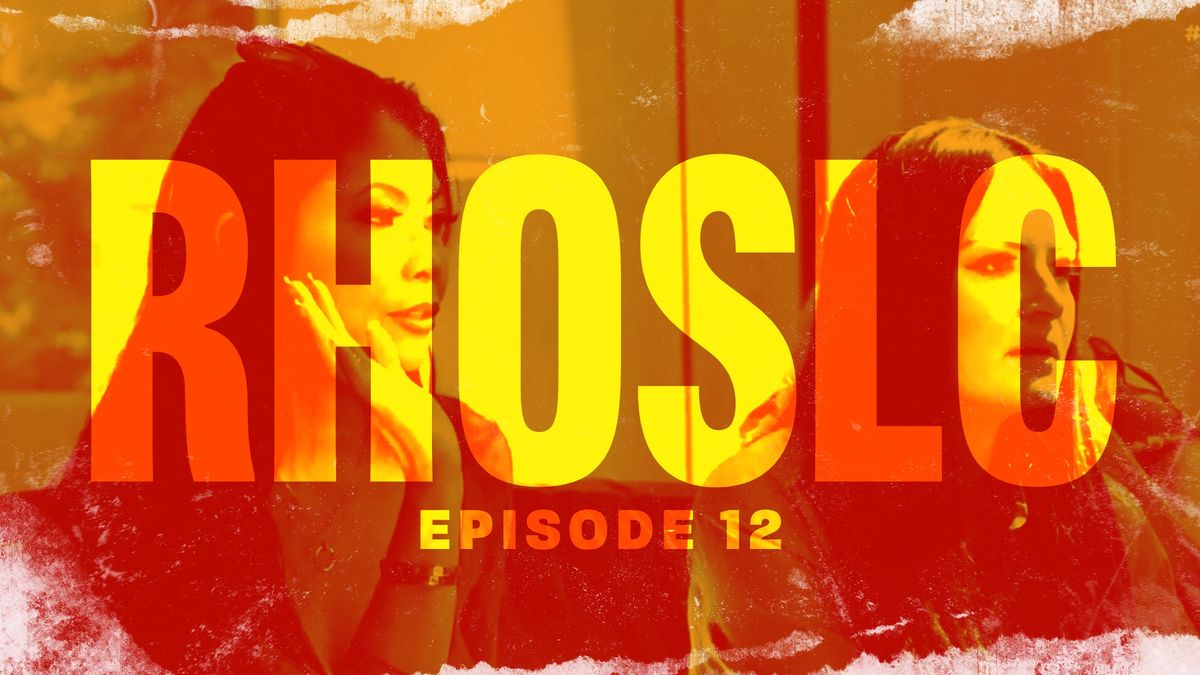 After a week off, the ladies of Salt Lake are back where we left them—still in Vail where a hole has ripped open in the space–time continuum and they have been yelling at each other in Bavarian costume for anywhere between three minutes to 300 years.

Meredith wants a concrete example of how Mary Is Bad because she likes Mary and feels bad gossiping about her church. At the end of last episode, Lisa tells the group that Cameron, a disgruntled former member of Mary’s church, “mortgagedhishousefor300grand” so he could give a large donation. Lisa is so busy running so many businesses she doesn’t have time to enunciate between words.

In a flashback, Cameron tells Lisa the $300,000 donation was for Mary’s odor gland surgery, which, as you might recall, was a main plot point of last season and just one reason this is one of the greatest shows on television. Until Connor Roy gets his sweat glands removed and fights with Roman about hospital smell trauma, I will be using my Sunday nights for RHOSLC.

Here’s the thing. Everyone is making this into a tit-for-tat situation by comparing Jen’s legal/personality issues to Mary’s church/personality issues instead of allowing them to exist in separate cursed universes. Heather and Lisa wanted to believe the best of Jen because they like her and Meredith wants to believe the best of Mary because she likes her. It’s that simple.

Lisa, who can feel the tide turning against her, decides to go to bed. A decision that is often for the best in any circumstance.

Except she really doesn’t go to bed. In a hot mic moment off camera, Lisa throws Whitney and the rest of the ladies under the bus and tells Mary what they were saying upstairs . . . except she conveniently forgets the part where all of this was her idea in the first place.

The next morning, Mary gives Jenny a pair of Louboutin booties as a thank you for doing her makeup—and because she wanted to lighten her luggage on the trip home:

And she also thanks Jenny for apologizing for their argument when they went tubing:

Meanwhile, Whitney is hurt by another late night conversation that happened off camera. When everyone went to bed, Whitney heard Mary and Lisa laughing in Heather’s room and Mary giving Heather and Lisa gifts. As Whitney puts it, “Like, you all just sat there and talked shit about Mary, and now you’re being bought off?”

In Heather’s side of the story, she was dead asleep when the door burst open to see Lisa standing there with a giddy smile while Mary presented Heather with a Louis Vuitton bag. In this same conversation, Mary said she wasn’t going to be Whitney’s friend anymore and she was best friends with Lisa. Grown adults said this.

Whitney says, “What kind of preacher of a church alienates, singles out people out to make them feel less than? I promise you, Lisa was hoping this would happen. This has been in motion since she sought out Cameron.” Besides a cat suit, there’s nothing Whitney loves more than a conspiracy.

Next, Heather goes to brunch with her sister who lives in Colorado. They haven't had much of a relationship since her sister got married 20 years ago to a non-Mormon and moved away. Heather’s sister is still harboring hurt from being isolated from her family, and Heather feels a lot of guilt for not seeking out a relationship with her sister. As she should.

Now that Heather has left the church, it’s a convenient scapegoat for why she didn’t do more. She says, “I’m sorry I put my faith and my Mormonism above my sister.” As a practicing Mormon who has many family members who have left Mormonism, Heather definitely could have always had a close relationship with her sister. But it’s sad that for whatever combination of family and culture and religion, it was easier to keep her sister out of sight and out of mind for so many years.

Back at the rental, the ladies are packing up. Lisa tells her husband John that Meredith has chartered a private jet home for them:

Meredith gathers everyone together with their cans of Diet Coke to reach some resolution before they leave. Meredith sincerely apologizes to Mary for telling Whitney what Cameron told her about Mary’s church. She clearly feels a lot of remorse for gossipping and that makes her a good person and maybe not a good Housewife.

What does make a good Housewife? Someone who will plant gossip about fellow cast members so as to not take the fall, which is what Whitney says Lisa does. Meredith invites Mary to say whatever she wants to say and what she chooses to say is mostly just mean things to Whitney.

Whitney asks why Lisa was saying negative things about Mary last night and then pretending she didn’t. Lisa doesn’t take kindly to this. She says, “Think the best of me, not the worst:”

In a confessional she says, “I would have your back if you would stop stabbing me in mine.” And I believe her because probably most of Lisa’s relationships are transactional. (See: JB HUSBAND BOSS.) And that is perhaps a valid way to operate, so long as everyone is on the same page, but Whitney is not.

Mary is holding court and allows Heather to recount her late-night tale. Coyly, Whitney asks, “You all got gifts, what did you get?” The shady editors give us a cash register bell and a price tag for every gift received—Jennie got the Louboutin booties worth $1,300; Lisa got a Chanel clutch worth $2,050; Meredith got a Louis Vuitton hat worth $1,210; Heather got a Louis Vuitton bag worth $5,750.

Whitney says, “I’m not hurt because I didn’t get a gift. I’m hurt because I realized I thought we were friends and we are clearly not.” Heather says she has a lot of questions she wouldn't have asked a week ago before Jen was arrested to which Mary says, “Nobody questioned Jen. I didn’t ask for my life. I didn’t ask for my inheritance. To compare me to what’s going on with her? Well, that’s evil.”

Evil may be taking it a bit far, but I do agree with Mary to this point. They’re not really comparable, but it seems that federal officers showing up at Beauty Lab was especially traumatic for Heather because it’s her business, which I can understand.

Mary says Jen manipulated Heather and Heather says, “But you’re manipulating me too, just in a different way.” Now, there’s a scientific law called the Law of Mary that says that for every reasonable thing Mary says, there is an equal and opposite nonsensical and/or mean thing about to come out of her mouth. For example:

In a confessional Heather reminds us she has overlooked that Mary “married her stepgrandaddy” and says, “When people start drinking when you come around, that’s because nobody wants to deal with your crazy.”

Heather is fed up with being on a cast with a crazy person. She is upset and leaves the conversation to pack her stuff, but not before saying that no one is being honest about what they were saying last night because they’re scared of Mary. Mary is both fragile and mean, which is why she has very few friends, and the ones she does have she buys with gifts. If there’s one thing that makes me think Mary is a cult leader, it’s that she never sees how she could be wrong.

As Heather is storming off, Lisa tries to cover for herself and tell Mary, “We had a great conversation last night . . .” But she’s interrupted by Heather who yells:

Whitney follows Heather downstairs to find her sobbing in the bathroom. Whitney asks, “What can I do for you right now?” because she’s a real friend. Heather says she doesn’t want to be on a plane with Mary so they decide to book a commercial flight home. Just like Mary can’t help being born into money, I can’t help riding at dawn for functional female friendships. I love these two.

The rest of the ladies want them to stay and talk it out but Heather’s past the point of no return:

Whitney reiterates that the women aren’t copping up to what they said last night. Meredith tries to defend herself:

And says nothing. That’s a statement Lisa can get behind:

Mary has had enough and goes on a sermon about how she took on her church and her inheritance and for them to compare her and Jen is horrible. True. But per the Law of Mary, she follows that by calling Heather “chubby:”

Then she cries to Lisa about how people have always hated her for her life and her lifestyle, which made me feel bad for her. But then the Law of Mary mandates she follow that by saying something utterly terrible, so she says people are comparing her to Jen who is a “thug:”

Mary and Lisa march downstairs and Mary says she wants her purse back as Heather hides in her puffy coat:

Before departing, Mary confronts Heather to say, “If you were trying to be my real friend, this would never even be. And then for you to just walk off like it’s nothing is super hurtful.” OK, this was good emotional intelligence. Heather says, “I’m really sorry I hurt you.” But then, because of the Law of Mary, she says under her breath:

And the cherry on top coming from someone who married their step grandfather:

Heather and Whitney are stuck looking for flights home while Lisa, Jennie, Mary, and Meredith board their private jet:

And that concludes another wild, very yelly, very screamy episode of RHOSLC. If you haven’t seen the mid-season trailer, I implore you to get your eyes on it. Until next week, don’t miss Meg and Emily on Hive Mind’s weekly RHOSLC recap from The Beehive.

Just About Every Utah Sports Fan Is Having a Good Time