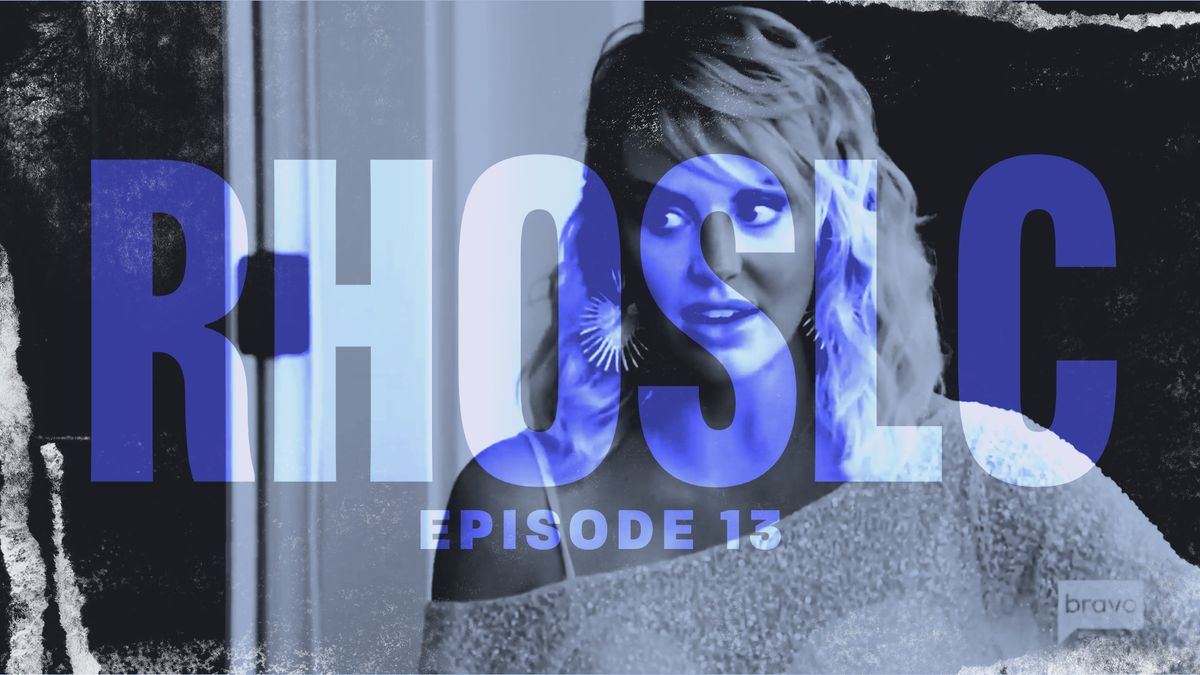 We begin the episode at Lisa’s ivory tower—ahem—her Ivory Home:

Lisa is downloading the Aspen trip drama to her husband John and workshopping some new stand-up material:

The editors cut this with Heather spilling the girls-trip tea to her oldest daughter, Ashley, who is LOVING it:

We cut to Mary who’s telling the same story to Old Man Cosby, and then to Whitney doing the same to a very bored Old Man Rose:

I love the she said-she said edit because the only thing more exhilarating than witnessing drama is rehashing drama, which is why I am writing this and why you are reading it.

We cut back to Lisa who screens a call from an unknown number then gets a text from that same number and—what do you know?—it’s Jen Shah. She has a new phone and is trying to connect with the ladies. Jen invites Lisa to get coffee, but Lisa doesn’t respond and tells John she has mixed feelings about meeting with her:

On the other hand, Heather picks up Jen’s call right away and agrees to go to lunch with her that day. Heather says that after her divorce, all she wanted was friends who would hold her hand, say they loved her, and not ask too many questions, and she wants to be that friend to Jen.

At lunch Jen recounts the day of her arrest from the time she left the Beauty Lab parking lot—a tale best told through silent film star Heather’s reaction shots:

Jen says she didn’t think she needed an attorney “because I didn’t do anything” and Heather is totally on board and believes her 100%:

The most upsetting part is Jen talking about how the federal officers held her 15-year-old son at gunpoint. The history of violence against Black boys and men at the hands of police is dark and bloody and to see Jen working through worst-case scenarios is just plain sad, regardless of what she (most likely) did or didn’t do.

Heather asks Jen if she’s heard from Stuart and Jen says he WAS her assistant and they were never business partners. Hm. Would a one-time assistant/never-a-business-partner do this (?!!):

In a confessional Heather says, “I know how close Jen and Stuart are. He’s her number one, and it sounds like she’s completely trying to distance herself from him, and I do not understand why.” Welp, in light of Stu changing his plea to guilty for what could be some sort of plea deal in exchange for selling out Jen, I find this highly interesting.

Heather tells Jen about the bus ride to Vail during the whole ordeal and says Lisa wants to distance herself from Jen (re: the calling of the six attorneys). Jen says “I want a big f---ing ‘I’m sorry’ and ‘I’m a piece of shit’ from them [Lisa and Meredith] when I’m proven innocent.” I love Jen’s mental vision board filled with apologies from The Brown Hairs and “proven innocent.” Dare greatly, Jen! Brené Brown is proud of you!

Back at the Roses’, Whits, Justs, and daughter Bobbs are eating Chipotle takeout. Bobbi calls Whitney’s skincare brand a hobby. Something women notoriously love is being told their jobs are hobbies. Justin, too, was daring greatly by asking his wife:

Justin says they put half their savings into the rebrand, and then in a confessional Whitney says they have spent “my family’s entire savings plus some.” Meanwhile, Bobbi girl is trying to blend in with her rice bowl so she can eavesdrop in peace:

Per Whitney’s tax and legal competency after Jen’s arrest, I was under the impression Whitney was some business idiot savant. I feel bamboozled because she tells Justin she doesn't know how much money they’ve invested in the rebrand and she’s applied for a million-dollar line of credit—something I would have asked my dad for while losing to him at Monopoly when I was 13. The kicker is she might need Justin to co-sign on the million-dollar loan.

This is a classic kid move: asking for something ridiculous in front of an audience so your parents don’t get mad publicly. High-stakes financial dealings with your partner on national television doesn’t exactly sound like good timing, but that’s what makes Whitney a great Housewife—she’s willing to risk her marriage for a reality television show.

They excuse Bobbi so Justin can tell Whitney that daddy’s gonna be dead soon so she needs to hold on to whatever of his money she can:

I was impressed with his honesty and how he kept his cool. He played Good Cop well enough that Whitney caves pretty quickly, dismantling my notions of her business acumen in one fell swoop:

At her haunted mansion, Mary has enlisted the help of a professional organizer for her room and closet:

Mary says she’s “actually kind of hurt” by the ladies calling her a cult leader and accusing her of taking people’s money. I would expect a stronger reaction from that type of insinuation, but OK, sure.

She says, “Most people have family to be attached to and to have history with. I haven’t spoken to my mom for 20 years:”

“For the last 20 years, I’ve bonded with things in my closet.” Mary is a disturbed woman and although I found the 40 different shots of her hoarder’s paradise grossly entertaining, watching her is not very fun for me. I have to kind of like my Housewives, and this sort of statement might be too deranged, even for me:

Next, Lisa and Meredith meet to go horseback riding. Lisa’s horse isn’t cooperating and Meredith is an elegant sportswoman. She’s the queen of rich white lady sports. They sit down for tea and Lisa says she doesn’t want a friendship with Jen anymore. In a confessional Meredith says she was hurt that Lisa struck up a friendship with Jen after she attacked the Markses on social media. Now Lisa is making up excuses to distance herself from Jen after the indictment.

The conversation turns to the ladies’ sit-down in Vail and Lisa can’t help but to harp on Whitney and Heather. Meredith is disappointed that Lisa and Bad Weather were fighting and not allowing Mary to defend herself about the cult leader stuff. Definitely a normal sentence to type. Lisa doesn’t take accountability for her escalation or her horse girl braids:

Now Lisa and Meredith are fighting because Lisa has a persecution complex. She’s on a roll with Lisa-isms you know she has in her back pocket for future Vida T-shirt branding:

She says she’s “not taking accountability for Whitney’s lies and Heather’s lies” and that “they’re just as bad as Jen. For real.” We’re LUCKY and BLESSED to have Lisa Barlow as a Housewife because this is an insane statement and that’s why she’s perfect and we need her on this stupid show.

Next, Jennie takes her daughter Karlyn with her to a tasting for an upcoming party she has that will showcase Vietnamese food. Jennie tells us nine-year-old Karlyn has a “sophisticated palate.”

Then we head to Jen’s where she and Coach are breaking Popeyes:

Over fast food fried chicken, Jen cries to Sharrieff that she thought Lisa was a true friend and she didn’t expect Lisa to abandon her in her time of need. Are we talking about the same Lisa?

Through tears, Jen sobs that she’s innocent and she feels alone:

Jen is crying about missing her sons if she went to prison and Sharrieff looks so, so sad and that made me so, so sad. It’s dark. Coach reassures her that his family is behind her and “my faith will not falter, and I will not leave you.” He’s a good person. Not a good person, Jen says:

The lack of accountability is concerning. Like, even if she didn’t realize what she was doing was outright illegal, she must have known her business practices were dishonest at best, so to say she simply doesn’t understand why this is happening, as if she’s a passive victim, is bold.

I’ve lived in a few places around this country and Utah is by far the cheapest for this sort of thing. I have often waited to get my hair done or get family pictures taken until we make a trek to Utah. By how many of Whitney’s “brand ambassadors” are taking swigs directly from champagne bottles, like half that $20-grand was spent on bubbly. It certainly wasn’t spent on new product, because I did not see ONE THING with the new branding:

After the photoshoot, Jennie, Heather, and Whitney sit down to rehash the Vail drama. Whitney reveals that she got the phone number of Cameron from Angie Harrington (the ghost of RHOSLC) and talked to him for three hours.

Whitney says, “If Lisa knew one-tenth of what I know, and one-tenth of that was true, Mary is bigger, badder than we ever realized.” Math. Whitney says she’s going to go to Lisa directly with this information because Lisa planted the seed originally. I HATE when people know something and they won’t just say it, which is what Heather and Whitney say Lisa does, but I guess Whitney is trying to play Lisa at her own games. TBH, this plan did not make sense to me.

Whitney doesn’t want to take on Mary alone and Jennie asks why everyone is scared of Mary. Whitney says the ladies act like they’re in her congregation because they won’t stand up to her. But still! No one can explain why they don’t stand up to Mary. The only one who’s come close is Heather, who last week  basically said you can’t reason with crazy. And she’s right.

Previews for next week include more cult talk, a confrontation between Lisa and Jen, and more confrontation at Jennie’s luncheon between Meredith and everyone. Until then, don’t miss Meg and Emily on Hive Mind’s weekly RHOSLC recap from The Beehive.