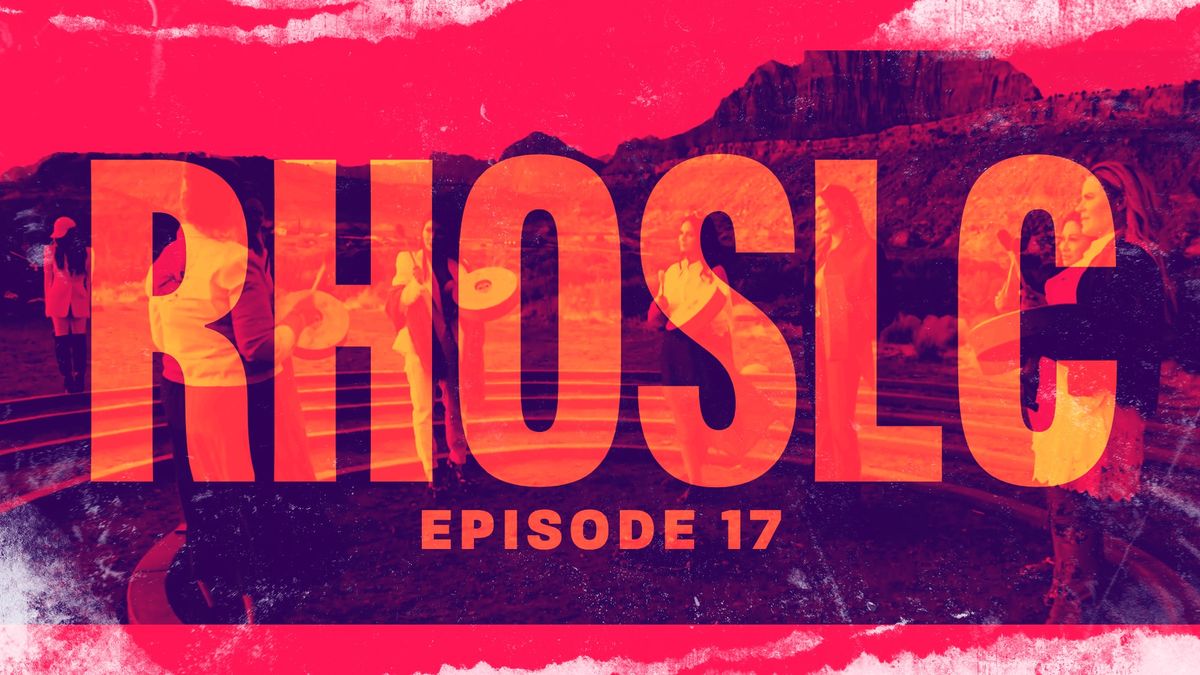 We left off with Jen screaming at Lisa in the same Sprinter van she fled when the feds were after her. More importantly, we left off with me thinking we only had two more episodes left in this season before the reunion. I thought, God willing, that this here episode was going to be our penultimate romp.

As it turns out, God was not on my side and, honestly, who tf knows when this season of RHOSLC will be over. Not me. Not Wikipedia. Not my editor. Maybe not even the Bravo God himself, Andy Cohen. But no one wants this season to be over more than our titular Housewives of Salt Lake City.

Nothing is more clear this episode than how much fun they’re not having and how much they wish to never see each other’s unmoving faces again. They are tired. They want to go home. They want to pack up their Spanx, Xanax, and flasks until next season. They’re at the end of their ropes as demonstrated by the verbal and near-physical altercation that takes place between Jen and Lisa. No one, not even Jen and Lisa, could make heads or tails:

I believe the fight is generally about Lisa being friends with Meredith? But I wouldn’t bet my lunch money on it. Lisa endures Jen screaming nonsense at her for quite some time before she (rightfully) snaps.

Lisa really says the words, “You wanna go?!” Which makes me think she’s either done this before or that she’s seen Maury before. Eventually, a brave producer steps in to pull Jen back. In a confessional, Jen has to come up with an excuse for fighting Lisa:

She is unsuccessful. Likewise, she doesn’t have an excuse for why she’s dressed like my grandma’s Christmas decoration:

Jen breaks down and has, what looks like, a panic attack. It’s hard to watch and it makes sense. Her life has gone to absolute shit. She may be in jail for a long time and she’s dealing with that in her own way. In a moment of clarity, she looks inward and admits she has harmed innocent people in her pursuit of money, fame, and power, and she alone must take responsibility.

I kid. She blames her castmates:

I think Meredith Marks is capable of crimes against fashion and maybe science because her robot facade is glitching. (Have you seen her reunion look??) And I think Mary M. Cosby is capable of perhaps more nefarious indecencies because she’s a narcissist and an alleged cult leader. But do I think they are capable of single-handedly siccing multiple federal agencies on one Jen Shah? No. No, I do not.

Miraculously, Lisa goes from fighting with Jen to acting as a hostage negotiator and talking her down in one fell swoop. Lisa says, “She’s broken. She’s hurting. And right now I just feel like Jen really just needs to feel heard and loved.” Heather also offers Jen comfort:

They arrive at a villa near Zion, pick rooms, and pretend nothing happened. Pronouncing Zion—Ziy-yen, Ziy-yawn, or alternatively, Ziy-yens—is a test so we can see who are the real Utahns.

Lisa calls JB HUSBAND BOSS so the editors can give us another glimpse into the dark, twisted contacts of Lisa Barlow:

She has a game plan most are not brave enough to admit:

Which is why she’s a great Housewife. This show as presently constituted does not work without Lisa.

Heather and Whitney sneak away and say Jen has been drinking all day and they are scared of getting on her wrong side with where she’s at emotionally and blood-alchohol-level-ly.

The ladies trickle out to the pool where a sloppy, drunken Jen almost drowns Jennie, who can’t swim, on a unicorn novelty pool float and keeps things breezy:

Meredith finds Whitney and Heather and they unload the drama from the van ride. There’s nothing quite like the acoustics of four women getting ready in a bathroom. The craziest things I’ve ever heard in my life have been told to me by other women in bathrooms, both public and private.

Meredith contemplates her own mortality and every decision she’s made that has led her to be stranded with these lunatics at least a couple hours away from the next major city:

Mary is devastated to have missed the excitement:

As she stares down the barrel of several days with co-workers she can’t stand, Whitney is regretting her light packing:

She sprays a final spritz of hairspray and sends Bad Weather into a tizzy:

Whitney is rushing to get everyone out the door so they can meet her spiritual healer, Betina. She has arranged for something called a Red Earth Ceremony and they have to get there before sunset, which she keeps inexplicably calling sunlight. Whitney asked everyone to wear white, and Mary and Meredith—who love a dress code—couldn’t care less. It’s an iconic, aspirational level of not caring about one’s job:

The van leaves with Meredith in her Canadian tuxedo and without Mary at all:

Finally Mary arrives at the ceremony and doesn’t participate because, once again, she simply does not care to be on this trip or on this show:

The women head back to the villa for dinner and Whitney is disappointed they were not able to do the “fire burning” because everyone was too late getting to the ceremony. In a toast, she says she wants the group to “come forward with resentments, grudges, things we are holding on to with each other.” In my experience, airings of grievances don’t make for good toasts or good dinner parties, but our girl Whitney is here to play.

Whitney asks Meredith, “Is everything OK?” to which she replies:

Whitney is giving Passive Aggression 101, normally reserved for mothers when their adult children can’t make it to a family gathering:

Meredith gives Responding to Passive Aggression 101, normally reserved for adult children responding to their mothers when guilt-tripped about not attending family events:

Meanwhile, drunk Jen is in the kitchen eating handfuls of undressed romaine and making a mockery of this private chef’s career:

Meredith, tired from a season of fights, elaborate feathered pantsuits, and laughing demonically at her cleavage-obsessed husband, excuses herself from the table:

The ladies want Meredith back so they can fight with her again, so they coerce a reluctant, yet hungry Mary to retrieve her fragile friend:

She agrees at the promise of steak upon her return:

Mary successfully convinces a broken Meredith to come back to the lion’s den because she’s given up her will to live at this point and is just clocking in to clock out:

It is a dumb question because they can’t answer honestly on camera. The real reason they are there is that they sold their souls and signed a contract to appear on this stupid show, giving up their voices to a network sea witch in exchange for a future career making $40 a pop on Cameo. To quote a tweet I saw today: “The Real Housewives of Salt Lake City is a television show about being on reality television.

In what might be one of her more honest, relatable moments, Mary admits:

Mary doesn’t want to do her job right now, which is to fight with these women. She’s tired. She wants to eat steak. She wants to go to bed. She doesn’t want to play the game and Whitney doesn’t quite know how to respond because more than anyone else on this cast, Whitney LOVES being a Real Housewife. She’s a proud member of the Institute and she’s playing the long game.

Jen, who neeeeeeds a contract next year to pay for those legal bills, isn’t going to go down so easily. In a tonal shift, she asks Meredith, “Why did you hire a private investigator to research me?” Meredith looks like she would rather melt like a T-1000 and reanimate asleep in her bed than fight Jen:

Meredith says she hired a PI to investigate everyone after her family received online threats, and the PI said “with “90% certainty” that the threats were coming from Jen. Jen says Brooks said negative things about her family, AKA:

Jen gets in Meredith’s face and threatens, “You don’t want me to tell everyone . . .” Meredith cuts her off and yells, “Oh sweetie, you have no idea what I know.”

As Meredith storms off, disengaging, Jen says that Meredith is fraudulent to which she replies, “Who’s calling who a fraud?”

Jen, insistent on having the last word, yells:

How do I feel about all of this? In the words of Meredith Marks: “I have no idea.” Maybe this show never ends. Maybe this is the metaverse. Maybe we’re on an alternate timeline where we will ultimately fall under the control of Supreme Master Lisa Barlow. Until then, don’t miss Meg and Emily on Hive Mind’s weekly RHOSLC recap from The Beehive.