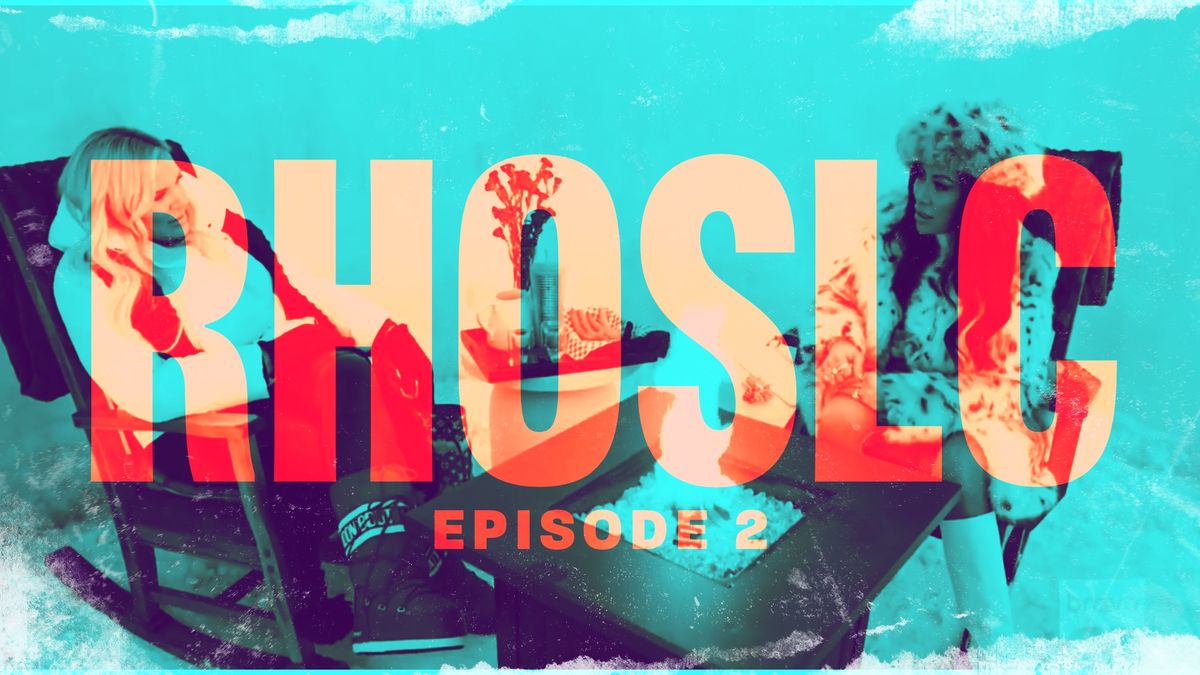 Welcome back to Salt Lake City, where we open up with our Housewives in their domestic elements—Whitney making this face when she realizes she can’t pick her kid up from school:

Lisa and young Jack wearing yet another bold Barlow sweater:

We then touch down in Park City’s #1 inner shoe sanctum with Jen, her co-conspirator/assistant #1, Stu-Chains, and assistant #2 (who I am beginning to think is her terminal assistant this season).

There, we’re gifted with some beautifully shady editing choices and hard truths about Jen’s spending habits from her nephew Dwayne, who’s been living with her...since she needed a sympathetic edit this season.

Jen tells us she needs to be a better person so she calls Heather to make amends for the meanest possible thing one insecure Housewife could hurl at another:

From one large rental in Park City to another, we greet Meredith who is looking waxier by the second. I guess we’re headed from Salt Lake Valley to the uncanny valley. I’m not entirely convinced she’s not not a replicant.

Brooks calls and honestly I zoned out mid-conversation because their combined vocal fry is so low only whales can hear the tones.

Seth shows up with a soul patch that made me feel disappointed, but also scared because I thought we had rid society of that facial hair option. He’s spending more time in Utah, which makes the fembot version of Meredith feel happy.

They talk about Jen’s liking and retweeting social media posts that make labels and judgments about Brooks’s sexuality. Meredith says, “All we want from Brooks is to identify as our son—no more, no less,” which is one of the sweetest sentiments I’ve heard coming from one of these stupid shows in a long while. When she followed that with: “Retweeting something is as good as saying it,” I almost fell off my couch because, frankly, how dare she make two coherent, true statements consecutively.

With wild horse eyes, Meredith says that Jen’s tweeting is “ENOUGH.” And then the editors add a cell-block sounding sound bite to remind us that they think Jen is guilty of fraud.

Back at the spooky carnival fun house that is Mary’s home, she invites her contractor cousin over to begin some renovations and what proceeds is maybe the strangest three minutes in my reality TV-watching career. With no time for water breaks or therapy sessions in between cuts, our eyes are first assaulted by her dining room chairs:

Mary then explains that being trapped in her home during the pandemic felt “stale:”

Next on this hellish home tour is “the green room,” which lives up to its name. Mary explains that every dog they’ve had has peed and pooped on the carpet, confusing it for grass.

Finally is the bathroom; specifically, the light fixture, which I present without comment:

As one well-acquainted in the dark art of menstruation, I’m not familiar with this particular PMS symptom, but I wouldn’t put it past a woman with too much money, poor taste, and anger toward God and man for the pad stuck to her underpants.

Mary tells her cousin that Robert Jr. is in “a teenager stage” and all she wants for him is to “be healthy. I want to find him a healthy girlfriend.” And that’s when I cocked my head inquisitively and things started getting...fishy:

I too want my children to be healthy and eventually find healthy life partners, but like, honestly wtf?? Mary, you crazy, girl.

I had to take like a 20-minute break to regroup. I felt like I had been through the scary boat ride in Willy Wonka and the Chocolate Factory.

After stress eating about ten Reese’s pumpkins, I came back to Salt Lake where Lisa was driving Jennie *using her knees* to Jen’s house to introduce her to Jennie for the first time. I hate how much I’m identifying with Lisa. I thought the giant Diet Cokes were enough, but once during a cross-country trip I drove the entire length of Kansas using my knees. Although that’s a much straighter shot than Parleys.

Without any explanation, Jennie and Lisa show up with a poster board with an American flag on it, a sewing machine, and Lisa wanting to make matching pants to wear to lunch together. They don’t revisit the pants-making conversation again.

We find out that Jennie has a karaoke bar in her basement and she’s a retired wedding singer. She then breaks into a rendition of “Hello, My Baby”, or in other words, not one of the first 1000 wedding songs I could think of off the top of my head.

After Jennie’s song and dance, Lisa tells Jen that Meredith wants an apology for what she’s retweeted about Brooks. It all goes back to last season when Jen flashed Brooks in a short skirt, he said he was uncomfortable, she said that he was being “derogatory about [her] vagina,” so she’s been liking homophobic tweets about him.

All you really need to know is that Jen is living her own (incorrect) truth, and Jennie is wondering how she can get out of her Housewives contract.

Finally we get outta there and go consignment shopping with Heather and Whitney.

Heather and Whitney play up the “girls about town” thing and are SO FUNNY when they make jokes about a beaver knit vest. I was actually trying to be sarcastic here, but when I screen grabbed this frame I chuckled to myself like a 14-year-old:

Whitney tells Heather that she doesn’t want her to be friends with Jen again because she keeps getting burned. I was unfamiliar with the old “don’t touch the curling iron ” adage, but Whitney is a child of the hairdressing industry, as her father’s wig won’t let me forget.

We head back to Jennie’s house where we spend time with the only person I want to be friends with in real life—Jennie’s nine-year-old daughter, Karlyn. This girl’s got jokes, is smarter than everyone else in the room, and I’m fairly sure she could be writing these recaps.

We learn that Jennie used to own several medical clinics but sold them to be home with the kids full time. Jennie's husband, Duy, wants her to have another baby and she doesn’t. But since he doesn’t have a uterus as far as I know, that’s all the time we need to spend on that.

In Daybreak, with Whitney and her husband Justin, she complains that she’s busy with growing her business, busy with the kids, but not getting as busy as she wants—wink wink. I guess women really can’t have it all. Justin is much older than Whitney, and from my understanding of human sexuality, this was bound to happen eventually.

Finally, we find ourselves at the Midway ice castles so Jen and Heather can work out their problems in totally normal outfits in a totally normal setting.

Heather and Jen meet in an ice cave to hash it out. Jen wants to know what kind of digs she’s been throwing Heather’s way that have been hurtful, and Heather is quick to come up with a few examples:

Jen has also accused Heather of being a manipulator, a liar, and a racist in order to get back at Heather for not supporting her at last season’s reunion. Quite impressively, Jen turns around the argument to be about her own hurt. It’s clear Jen is hurting from a very deep place and is lashing out in every direction at everyone else’s expense. She really loses me when she says she’s coming from a place of love, because there’s no evidence to support that claim.

Heather is a good friend and Jen is lucky to have her. So much so that she reaches her hand into an open flame to save their friendship churros.

And we’re all lucky to have these women. Want more of these lovable wackadoos? Listen to Hive Mind’s RHOSLC weekly episode recaps from The Beehive and catch up from last season with The Ringer’s recent RHOSLC feature. Till next week!