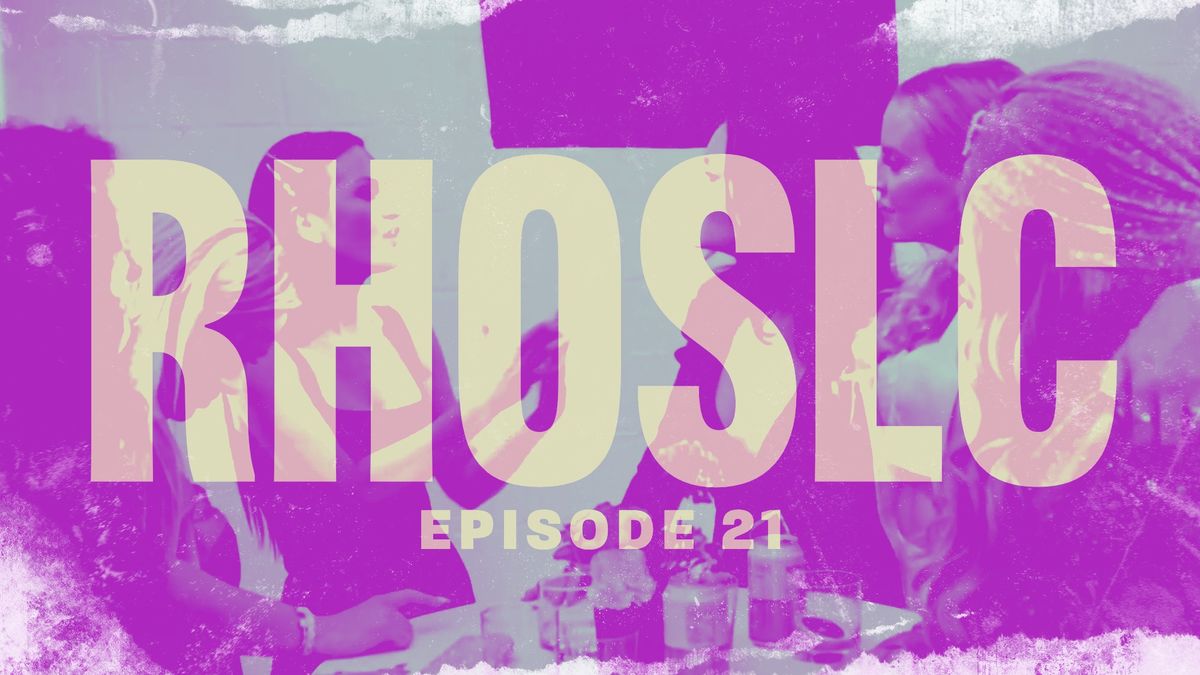 We’re here. The finale of season two of RHOSLC. When I started writing these recaps it was SEPTEMBER—four score and two variants ago. This season has been on for 42% of my baby’s life. This season predates a WAR.

You know who is most excited for this season to be over?

Never before has the Housewives universe had a tagline so judgmental, so cosmically threatening, so strange. But never before has there been a Housewife like Mary Martha Cosby. For she was hewn from another world—child of deity, wife of step-grandfather; trapped in a closet prison of her own (and Versace’s) making.

But this isn’t just an ode to one of our two departing Salt Lake Housewives—this is a party, baby gorgeous.

We begin with Lisa getting ready for the finale Vida party. She and John arrive at a warehouse:

Because she is a caricature of herself, she loves it:

Next we have a cameo from one of our recurring characters. No, not the ghost of RHOSLC, Angie Harrington; it’s roadside attraction, MULLIGANS, where the producers have convinced Mary to play putt-putt with her son:

Jen needs movers because, unlike everyone else on the planet, she hates moving!

In a play to, I assume, get a sympathy discount from the movers, she overshares about her legal case:

They do a walkthrough of the house to get a bid and try to cut costs where possible:

Jen makes sure they (we) know that all the furniture is theirs and that was more shocking to me than Jen’s arrest. You’re telling me. This house. In Park City. Did not come staged and furnished??

The move will come out to $10,000 and, hey, what’s ten grand when you gotta come up with two million? On a smaller scale, that’s kind of the concept of Disneyland or shopping alone at Target.

In Provo, Heather and her daughters set up a memorial for Heather’s father who passed away unexpectedly during the height of COVID. When I was looking up where this cemetery was because I’m a JOURNALIST, I found this Google review:

In Vail mere weeks ago, Heather met with her estranged sister and said that in a year she would like to hold a celebration of life for her father. Now Heather is offended that her sister “refused” to attend the memorial even though it’s only 11 months earlier than when she said.

Heather tells us the only people who are attending the memorial are those who feel othered—“conflicted Mormons who don’t really have a place to grieve or to do the rituals that they grew up doing.”

Heather poignantly eulogizes, “Here I am, a bad Mormon, and I want him to know that I’ve lost my faith, but not my faith in other people. And most importantly, I haven’t lost my faith in myself, and I haven’t lost faith in my ability to make him proud, even if it’s under different terms and definitions.” It is a beautiful expression of the way I imagine many who leave their familial faith feel, especially when loved ones pass away. But I couldn’t help adding a mental asterisk when I remembered Heather has a book deal for an upcoming memoir entitled Bad Mormon.

She says her mother and most of her siblings chose not to participate and Heather conjectures it would be “a compromise of their values and a betrayal of their faith.” Again, there’s an asterisk: Heather omits that the memorial is being filmed for a reality TV show that primarily features drunk women fighting.

If her family didn’t participate in the memorial because Heather has left the church, that would be super messed up. And, as she hypothesizes, if they had a religious memorial themselves and didn’t tell her, that would be even worse. But I have a feeling we’re missing some information.

Out at the Salt Flats, Meredith is having a photo shoot for her brand with:

She’s partnered with GLAAD to raise money and show her jewelry is for everybody. Except for poor people.

Meredith is a good mom and probably the most good of the garbage humans on this show. She and Seth show their support for their son Brooks and LGBTQ rights:

Although the next time we see Seth he will be wearing this shirt:

Now, I’m all for sex positivity, but everything that unfolds next made me feel sex negatively. Justin gets home from a business trip and Whitney greets him in cheap lingerie. She asks him in her sexy baby voice, “How was your trip?”

I forgot Whitney’s storyline was figuring out how to be a working person and have fun sex. I think that’s called marriage. To remedy this, they do “love art” in which they cover their bedroom floor with butcher paper and have a roll in the paint. You know what is a turn-off for me? Cleaning up an art project.

In my notes I simply wrote: “Whitney, girl. Too much Rose.” Bravo, I beg you—I come for the fighting, not the lovemaking.

Lisa and John drive to the Vida party and you know she’s a mom because she announces:

Lisa tells us that it’s NOT A THEME, but the inspiration is “chic 80s and 90s vibe:”

Lisa says she was “inspired by mall eats, but on a luxury scale.” Now she’s speaking my language. There are a lot of throwback editing choices and A LOT of filler B-roll. Surely enough to have needlessly made this season at least one too many episodes. It must have been to torture me.

Meredith arrives and Lisa breezily greets her, ignoring any issues they had in Zion, like you usually do in public at a party. In a confessional, Heather is annoyed that Lisa and Meredith pretend to play nice when their friendship is not in a good place. She says, “It feels like the friendship that never was, honestly.”

I agree that it now seems like they were never as close as they said they were, but what’s so wrong with a surface friendship here and there? Who cares? I know this is the point of the show and there needs to be some tension, but Heather is going to find fault in Lisa whenever she can.

There’s mingling and small talk, things that sound as easy as a filling at the dentist after two years of the pandemic. But Heather’s at her best:

Lisa does the thing my grandma does when someone is hungry, which is to announce every item of food in her fridge and pantry possibly even mildly available for consumption:

Mary arrives and does not partake of Lisa’s Vida tequila. A producer asks why she didn’t order any:

I realize I have written many, many times that I don’t think Mary should be on television. I have questioned her stability. Her fashion. Her status as a cult leader. But I was wrong. That’s exactly why she needs to be on television. In the words of legend Joni Mitchell, but more importantly, Counting Crows: you don’t know what you got ‘til it’s gone.

Whitney approaches Mary and tries to do what she’s done all season—get wasted and pull Mary into a confrontation:

Mary reluctantly agrees to sit down with Whitney and Whitney apologizes for talking about her church. She does this because it is the season finale party, this storyline has gone basically nowhere, and Whitney has to tie up the loose ends because she has studied Real Housewifery and knows the beats. Jennie eavesdrops and inserts herself by yelling at Mary. Mary walks away with Whitney to continue their conversation and Jennie follows. Mary’s over it:

Mary breaks the fourth wall and says she signed onto the show before Jennie was cast because she couldn't care less about being on the show anymore. But Jennie cares very much so she shows her full, racist ass. Mary walks away and Jennie continues to antagonize her, complete with stage direction from Heather in the back:

She throws a glass at Mary as she walks away and it’s bad. Watching Jennie provoke and attack Mary is upsetting, especially after what we know about Jennie’s anti-Black social media posts. I know Mary has her own dark issues and there was some racism coming back Jennie’s way from her, and it all just sucks.

The last we see of Mary Cosby on this program is her slinking out of the party after a glass was thrown at her, and nobody following her out. She must have been difficult to work with, but this was difficult to watch.

Honestly, this party is a flop. The vibes are off, my friends. Could it be the theme-not-theme or the blatant racism? Or why not both? The ladies unnaturally huddle as they are wont to do (it is their job) and Jen asks Meredith why they can’t be friends. Meredith has gone over this many times. It is because she doesn’t like her:

Meredith projects and thinks Jen is talking about her marriage, which she is not. This causes Meredith to completely glitch:

Heather storms off proclaiming, “I hate these bitches.” Meredith and Seth share a gross kiss before sauntering off and Meredith yell-threatening:

As the party shuts down, we get finale update cards for everyone except Jennie. Heather’s says she has “officially embraced being an ex-Mormon. To celebrate she took a yacht trip to Norway.” If that’s the rite of passage for ex-Mormons, I know quite a few who are owed a luxury trip.

And that’s it, folks! Seriously. It was weird. We conclude this hilarious, emotional, dramatic, marathon season with this final haunting image, Barbie legs askew:

I can’t say I disagree.

The winners of the season are Jen and Lisa. Jen for somehow bamboozling me into thinking she’s likable—I guess bamboozlement is the crux of her issue at hand. And Lisa for penning a few memorable Housewife catchphrases that will live on in perpetuity and will surely spawn many more Barlow businesses. “I love Taco Bell and I love fine dining” will long be remembered, dust to dust.

The biggest winner is Mary who got what she always wanted—to walk off this show forever, and she managed to look her best while doing it. I’ll sincerely miss her crazy, but hopefully, she’s not lost to reality TV forever.

The losers are team Bad Weather, Heather and Whitney. They were at the top of their games after season one so they had the furthest to fall. Whitney tried too hard and Heather showed her cards too much. She was nice to everyone in person, and shady in confessionals. We need the shadiness front and center. Hopefully they rebound next season. We need to be able to root for Heather.

The biggest loser is, of course, Jennie. Good riddance.

And out on the Salt Flats is Meredith. She was often on her own plane this season and I’m hoping she can come back down to Earth next year with both less and more engagement. Less dark anger, more petty drama. Perhaps that’s asking too much—so maybe just fewer blazers?

Thank you genuinely for going on this journey with me all season. I can’t quit these broads, and thanks for not quitting on me. Don’t miss Meg and Emily on Hive Mind’s weekly RHOSLC recap from The Beehive, and stay tuned for each of their recaps for the three-part season two reunion.

A Week in Sports Chaos: Juwan Howard, Phil Mickelson, and the Worst Hat Trick of All Time