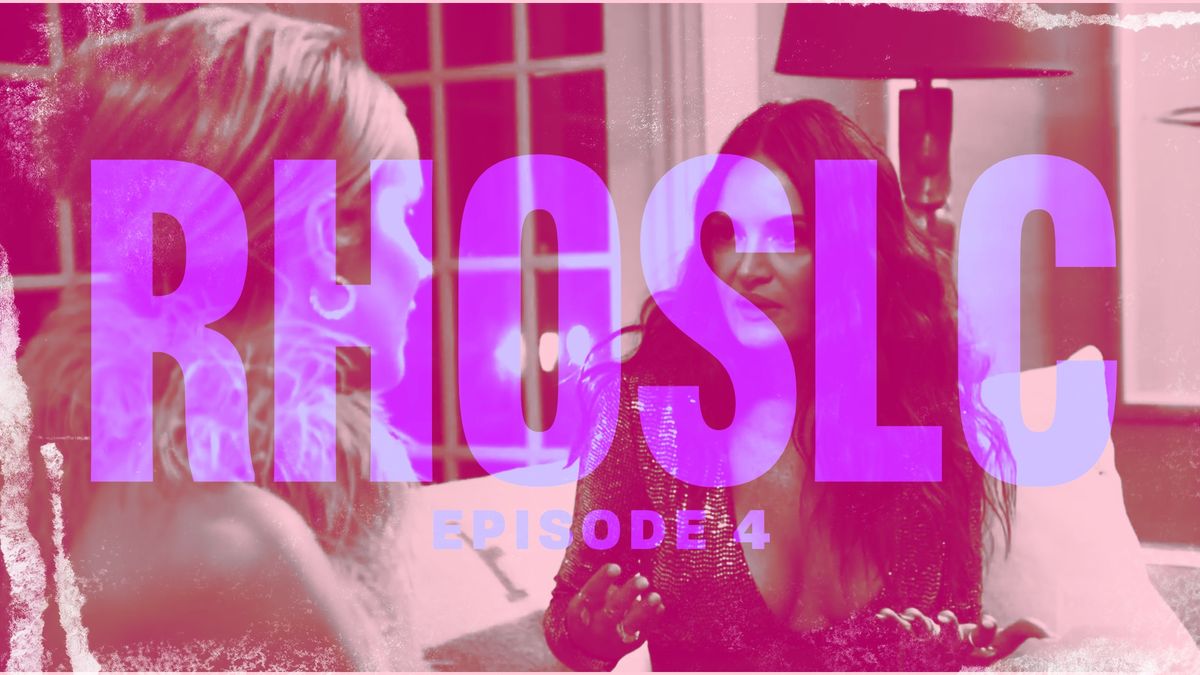 This week we reconvene with our Housewives on a frozen lake where Jen and Meredith are fighting because they have to film scenes together even though they don’t want to.

The more we get to know Meredith, the more surprised I am that she signed up to be on RHOSLC in the first place. She thought it would be good for her jewelry business, and now she’s wearing snow pants out in God-knows-where-Uinta-Basin being forced to make amends with someone she would be happy to never ever see again.

Lisa wants Meredith to make up with Jen, because as Meredith aptly puts it, “it will make life easier on Lisa.” Lisa can totally relate to what Meredith is going through with Jen making statements about her son Brooks’s sexuality because she’s gone through something very similar with her own son:

Meanwhile, Heather and Whitney try to explain to Jen why Meredith would be hurt. Jen isn’t getting it because the rhinestones on her stupid hat are apparently blocking anything from entering her brain.

Jen storms off to Lisa, and Statler and Waldorf over here are contemplate getting involved or just heckling from the sidelines:

Inexplicably, Jen still thinks her vagina is a factor in all this, or maybe she’s just playing a game to see how loudly she can say “vagina” in public before someone laughs.

In a rage, Jen chucks her $70,000 tennis bracelet as far as she can, which should be cause for jail if nothing else.

Jen’s #1 assistant/co-conspirator Stu pops up out of nowhere like the phantom of the fishing hole and somehow talks Jen down. A man of many talents, he may have been indicted on fraud charges, but let’s get him a job as a hostage negotiator in the meantime.

Jen apologizes to Meredith and Meredith accepts her apology. Jennie asks them to “hug it out” to remind everyone she’s still there. Lisa “feels better” because now she doesn’t have to feel guilty about being friends with Jen.

Then an old witch in the middle of the woods tricked me into saying “Mary M. Cosby” three times and, sure enough, Mary appeared on my TV screen:

I am increasingly worried about Jennie’s Housewifery because the editors then cut to B-roll of her teaching her children how to fold towels:

I worry the Bravo bell hath tolled for Jennie, because we don’t want to see our Housewives actually doing housewife things.

We settle down with Lisa who is introducing us to two new Housewives-adjacent friends, or “Friends Of” in Bravo-ese: Sarajane and Angie. Lisa and Angie met through a grand Utah County tradition:

Angie Harrington is an Instagram influencer of moderate, if local, renown with 122,000 followers, the count of which, I’m guessing, increased by a few thousand since this episode aired a few days ago. The rumor is she was supposed to be a primary castmate last season but had just had a baby. So they replaced her with Mary Cosby and the rest is a very strange, very hospital-smelling history.

Angie and Lisa have known each other for 20 years and share the sixth love language: fast food.

Angie asks Lisa and Sarajane what they’re doing “next weekend” and—it’s very cute—they pretend like they don’t have a call sheet and they haven’t known for months about the party Angie’s inviting them to:

Angie is throwing a charity event at her home for Encircle to support LGTBTQ+ youth—Angie and her husband have a transgender child and are invested in the cause. The theme is 70s casino night, so jokes about Mormons and gambling are on the horizon.

Angie brings up that Whitney (and, ahem, the entire cast) is going to be there because she and Whitney have recently struck up a friendship. Angie disguises her new friendship by saying she and Whitney are cousins.

At Mary’s house, Mary asks Robert Jr. a question to see if she’s a ghost like Bruce Willis in The Sixth Sense:

Meredith shows up in a Canadian tuxedo looking like Justin Timberlake at the 2001 American Music Awards:

Meredith asks Mary how she’s feeling about seeing Jen for the first time “since New York,” AKA last season’s reunion sit-down. At the reunion, Jen apologized to Mary for calling her a “Grandpa f---er” and then shortly after, started liking memes on Twitter that referenced her being a “Grandpa f---er.” That did not sit well with Mary:

They talk about the Lisa of it all and how Lisa asked Angie off-camera to not acknowledge Whitney as her cousin. Probably because the whole cousin thing is a weird stretch, but these two kissing cousins didn’t take that lightly.

Angie reveals that a few hours after she got together with Lisa and Sarajane to talk about her casino night, duh duh duh . . . her caterer canceled. Whitney has a conspiracy theory that Lisa is sabotaging Angie’s event. This is the type of petty Housewife nonsense I live for.

In Park City, Jen is getting ready for the charity event. The beautifully shady Bravo editors linger on a shot of Jen’s fingers dripping in diamonds to remind us that they think she’s guilty of fraud:

The Housewives begin descending upon Provo for Angie’s casino night, each looking more ridiculous than the next. Mary tries to climb over a little balcony thing to avoid talking to Jen—an ill-advised move by Whitney and Jennie:

Jen emphasizes what a big deal it is that there’s a casino night in Utah County. Like BYU and UVU students aren’t driving to Wendover and Vegas every other weekend.

She says having a roulette table and a “crap” table—everyone keeps misspeaking and calling the dice game “crap” instead of “craps”—is against the church’s Word of Wisdom. The Word of Wisdom is not that. It’s about not smoking or drinking alcohol, coffee, tea, and we don’t need to add on anything else. We’re working with enough off the table.

Angie’s husband Chris gives a moving speech about what Encircle does for LGBTQ+ youth and they receive a big donation. Now we can move on to what’s really important: catering drama.

Meanwhile, Jen pretends like nothing ever happened with Mary and they pinkie promise to be nice because that’s what women in their 50s do. Mary makes a meandering, not-quite analogy about trusting Jen:

Like confronting a mountain lion in the wild, Angie has a costume change and has taken on her largest, fluffliest, most powerful form so she can challenge Lisa:

So Angie and Lisa sit down and Angie explains that after they met at Sarajane’s house, the caterers said, “Lisa’s assistant called and we have to pull out of your event.”

But Angie has some damning evidence:

Lisa is angered at Angie’s allegation of meddling and brings up that she’s bothered by Angie’s new friendship with Whitney. Angie points out that it sounds like Lisa is deflecting. We’re in dangerous territory when our Housewives start overusing therapized words like “deflecting.”

Heather and Mary are blissfully unaware and Heather gives Mary a selfie lesson, which I really appreciated personally:

In a confessional, Angie says that she thinks everything with Lisa boils down to control, and it seems she’s right by the way Lisa reacts. Angie insinuates that Meredith and Lisa’s friendship may not be 100% and Lisa starts spiraling:

The conflict begets more chaos—Housewives smell blood in the water and start swarming. Even Angie’s husband Chris gets in there. Lisa is upset:

Lisa does not like Whitney, so Whitney isn’t going to give Lisa the benefit of the doubt. If Lisa doesn’t like this, she should be nicer to Whitney. She could start by not say things like this:

Instead of calling Whitney when her catering went amiss, Lisa says Angie should have called her about it. But then Angie wouldn’t make a very good Housewife, would she? That’s what a normal person would do, but now Angie has signed a contract to appear on RHOSLC and there’s a whole new set of rules for this friendship.

Do I think Lisa sabotaged Angie’s catering? I’m not sure, but Lisa hits every beat from Whitney’s dissertation, so she might be onto something. One thing is for sure—now that Angie is a cast member on this show, her relationship with Lisa will never be the same.