RHOSLC Season 2, Episode 5: The One Where Whitney Earns Her Paycheck 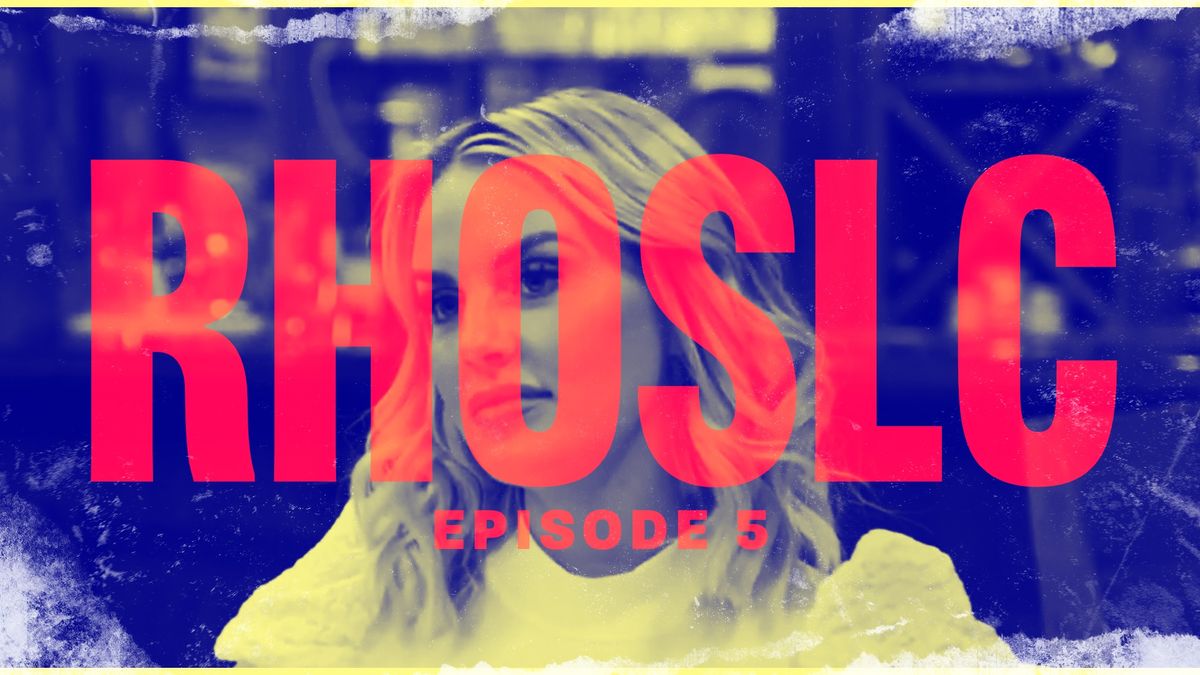 This week in snowy Park City, Coach Shah has been hard at work shoveling his enormous driveway for the past six hours. Jen emerges wearing a fur and carrying another for the road, as one does. She tells Sharrieff to “let the shovelers shovel” to which he replies:

Hm. So she tells him to put on a coat:

The cameras are rolling and Coach is telling on Jen. Of course there’s no shovelers at this house of cards. Of course she wouldn't offer to bring her husband a coat until the cameras were there.

You know she’s shooting him daggers with her eyes trying to tell him telepathically to play along. Anyone who’s been in a busy public restroom with small children while they’re, um, going through something, has been there. “Mommy, wow, that’s really stin—” “HAHA CHILD YOU’RE SO FUNNY IT SMELLS BAD EVERYWHERE HERE IT’S THE AMBIANCE.” But I digress.

At Mary’s house, she’s being domestic and making cookies. She calls the eggs “chicadees” as she cracks them and I did not like that. But then she accidentally drops an egg into the bowl and does a weird robot pointing dance and I really liked that.

Over at Lisa and John’s, they’re rehashing last night’s events from Angie’s casino night. “I was ambushed,” Lisa says. “What a waste of a Gucci outfit.”

Lisa thinks Whitney has been waiting a long time for something where she can say: “I took something from Lisa. I can take Lisa’s friends.” John suggests Lisa try to be friends with Whitney. This has not occurred to Lisa before. So simple. So simple it couldn’t possibly work.

At Whitney’s house, her kids, Bobbi and Brooks, are home from school. I’d be remiss not to note the absolute stranglehold the name Brooks has on the people of Utah, lest we forget Brooks Forester of Desiree’s season of The Bachelorette. May he rest in reality TV infamy.

Mary has a driver take her from Salt Lake to Daybreak and I can’t even fully articulate why that’s so funny. For one, it’s not close. And two, it’s Daybreak. But then again, I can’t imagine Mary driving herself anywhere, so how else is she supposed to get west of I-15?

Before she can hardly say hello, Mary drops into a story—nay, a sermon—about a woman from her congregation that I can’t do justice, so here it is in screen grabs:

The “I’m excited to be here” dance/transition is pure theater. It is camp. It is Mary Cosby in her strange little Louis Vuitton-coated nutshell.

With nowhere else to go from there, Whitney and Mary head down to the enormous theater room in Whitney’s basement. Textbook Utah house. What’s even the point of a 6,000 square-foot modern farmhouse if it doesn’t have a theater room?

Whitney tells Mary that Lisa is mad because she is “friends and cousins with Angie.” About once per episode Mary makes complete sense and I can see how she’s been the respected first lady of her church for years (and possible cult leader, but that’s neither here nor there).

In a confessional, Mary reads Whitney like a book: “I think Whitney feels validated through Lisa. Otherwise, you wouldn't care.”

Whitney says that Lisa is not her “vibe” because Whitney is all about ~vibes~, but she also wants “some sort of respect or acceptance” from Lisa. Mary encourages Whitney to reach out to Lisa for a friendship, and I’d like to congratulate everyone on doing a great job of moving this storyline along. Well done.

Next, we’re at Heather’s house where she is playing the piano because Heather is RHOSLC’s official cultural Salt Lake Mormon representative. Her daughter Ashley comes in and they open up her acceptance email to UCSB.(!)

Heather is excited for Ashley to have the out-of-state college experience she never had. She claims Ashley “has never even left our home,” and we know that is NOT true because Ashley did go on trek, which will surely be far more traumatic than going to college 800 miles away where she knows no one. Rest assured, little Ashley.

Heather says Ashley has been in a Salt Lake bubble where she’s been metaphorically eating PB&Js and now, going to UCSB, she’s going to the Chuck-A-Rama Buffet. Chuck-A-Rama is a *very classy* chain that absolutely no one knows about outside of Utah and Idaho and, in context, I find that funny.

Back in Park City, Jen is ready to apologize to Brooks. Kind of.

And on a related note, if any Housewives are reading this, then yes, I am definitely available for hire. I have no honor.

Brooks and Meredith arrive for the tête-à-tête—or, tit-a-tit—with Jen, and Meredith is in an all-red pantsuit with honestly spectacular cleavage. They were suspended in midair like shiny orbs. Zero gravity boobs.

I’m glad Meredith came with Brooks because it would be weird if not. She does sit at the bar to give them about six feet of privacy. Jen apologizes for liking unkind tweets about Brooks and he is so well-spoken, so composed. I would have crumbled, melted, been a puddle, and every other turn of phrase.

Brooks says, “I felt like I didn’t have a voice anymore and that it was being taken away from me.” I was worried Jen was verging on apology–non-apology territory, but she admits to deflecting:

Jen has said before that she’s always apologizing, which is true because of the horrible things she says and does. I’m sure it’s exhausting for her, but I imagine it’s even more exhausting for the people around her who are collateral damage.

Meredith says, “At the end of all of this, the only thing I want is peace for my child.” Meredith and Brooks are kind and gracious to accept Jen’s apology and move on, even though Jen frankly doesn’t deserve it.

In Salt Lake, it’s a guys’ night for John, Justin, Seth, and Sharrieff. Seth enters the restaurant with an interesting frolic that couldn’t be more different than his wife’s usual slinky saunter. If he’s anything, he’s engaged:

Sure, they’re getting together to have a guys’ night, but also to film a scene as House-husbands. It seems Bravo is doing a chemistry test and Seth doesn’t want to throw away his shot, so he decides to rate everyone’s marriage.

Seth presumes Justin and Whitney have the best marriage of the group on account of the stripper pole in their house. An important metric.

Next, Jennie and Whitney have an obligatory lunch and they talk about how Jennie sold her businesses to have more time with her kids. Her motives are noble, which is yet another reason this show is not for her.

Whitney tells Jennie she would like to have more children but Justin had a vasectomy. You know who didn't have a vasectomy? The leopards doin’ it on Whitney’s shirt:

Jennie reveals that she had her tubes tied and she’s in her 40s, which makes it even more insane that her husband wants to have another child. (And again, most importantly, she doesn’t want to.)

Whitney tells Jennie she’s grateful for the “opportunity to connect,” which is what you write in a formal email. Storm clouds are gathering over Jennie’s RHOSLC contract. Whitney understood the assignment and brings up her conflict with Lisa because that’s her job:

So on that sure footing, and because their husbands get along, she decides to meet up with Lisa.

At Solitude, Heather and Meredith go skiing. They’re fun to hang out with and seem like actual friends—a stark contrast from the previous scene between perfect strangers, Whitney and Jennie.

Heather asks Meredith how to talk to her kids about sex because that’s new territory for her. Meredith gives Heather wise advice: get your kids to talk to you about sex, and condoms always.

Lisa has invited Whitney to meet in Park City for gin and pie, an alternative to both wine and cheese and gin and juice. Lisa is PUMPED about the alphabet:

Lisa tells Whitney she thinks they’re friends and Whitney says they’re not. Whitney is earning her paycheck this week. They order their gin and pie, and Whitney doesn’t waste any time:

Whitney is bothered that last week at Angie’s casino night, Lisa referred to her as “this.” Fair. Lisa explains it was a misunderstanding and she meant something completely different:

Lisa and Whitney are getting into it and Whitney is holding her own but they keep getting interrupted by the server, which is a Housewives trope I love. Stopping mid-argument to accept a steaming hot plate of pie and then going right back into the fight takes finesse and an artist’s touch.

Lisa says she’s a Sag and Whitney is a Libra, so obviously they can figure this out. Thankfully they have something worth fighting for:

Next week on RHOSLC, Whitney and Lisa fight again. What was that about a hamster wheel? In the meantime, listen to Hive Mind’s RHOSLC weekly episode recaps from The Beehive.

This Is the Place (For Burgers, Fries, and Shakes)