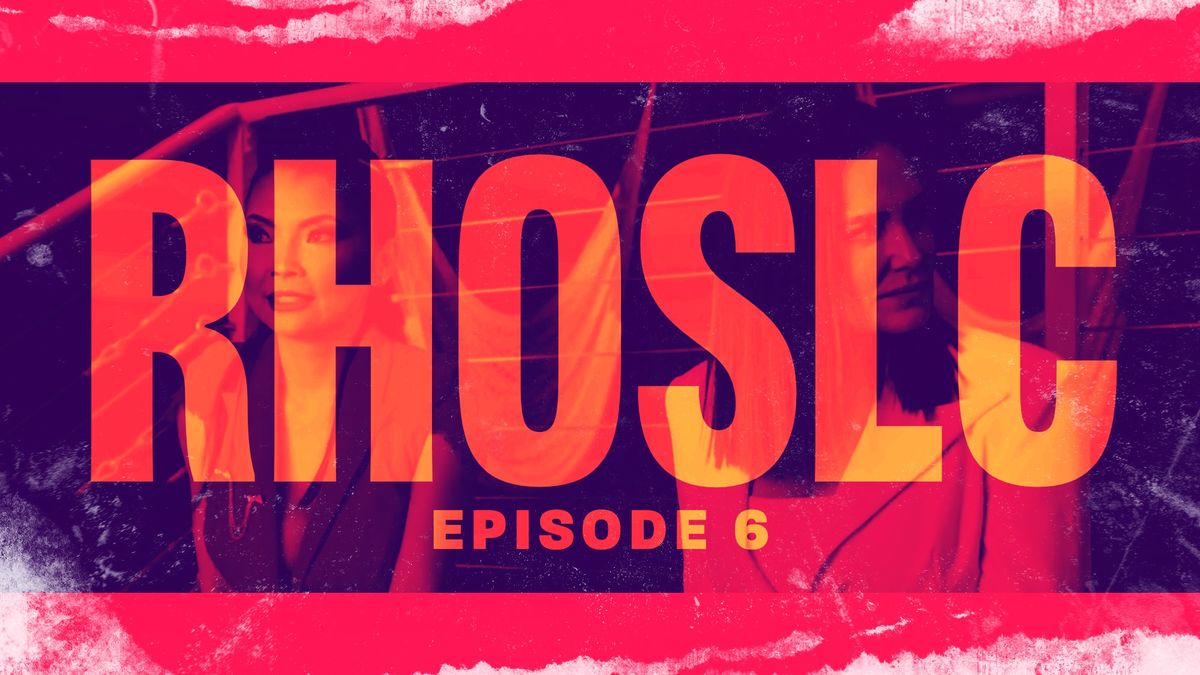 Welcome back to Salt Lake City for another week of Whitney referencing the pole in her basement, pointless reconciliations, and more fighting. New this episode was me crying tears out of my face and mentally ranking this as one of the darkest, saddest Housewives episodes I’ve seen in my 15 years of watching.

But first, we open up with Whitney and Lisa who are giving it the ol’ college try and attempting to build a friendship the way anyone would—on the silks:

Whitney and Lisa clearly can’t stand each other. But they’re trying for the cameras:

They come up with stripper names for their aerial alter egos and Whitney’s is much better than Lisa’s, yet neither of them are as good as Whitney’s God-given: Whitney ‘the Wild’ Rose.

They spin around on the silks and try to touch toes (ew), giving a recreation of The Creation of Adam Michelangelo would be proud of.

At their haunted mansion, Mary and Robert Sr. are reunited as Robert Sr. was in Florida during the pandemic for A YEAR:

Like a tree falling in the woods without anyone to hear it, what’s a husband if he’s gone for a year and you never miss him?

Robert Sr. is bumbling about and Mary can hardly stand to look at him:

Mary says, “I don’t think we know each other. I actually love rice. I eat rice a lot. But I like the long grains. He always makes the short ones. And why does he not know that about me? And he’s like, ‘Here you are!’ and I’m like, ‘There’s the short rice.”

This is some Tennessee Williams-level monologuing. Theater nerds near and far should read this for auditions—“Short Grains” by Mary M. Cosby.

Lisa, Jennie, and Meredith meet up to get one of those fish pedicures where the fish nibble the dead skin off your feet (again, ew). It’s a very foot forward episode.

Jennie tells Lisa and Meredith about how her husband Duy wants more children and she doesn’t. She opens up about the stillbirth of her daughter and it was completely, utterly heartbreaking. I was a puddle. Meredith suggests they go to a counselor to help process this trauma and learn to communicate.

After a commercial break and a quick 180, we’re at a jewelry store with Jen and Stew, who are, forebodingly, nary apart this season. Jen wants to give a generous gift to her “group of friends” (read: castmates) to show them she’s ready to move forward. AKA she wants to buy their friendship.

She settles on a diamond snowflake necklace for each castmate because all of them are different and unique and, although she doesn’t say it, that’s what they’re holding in the opening credits. This will put Jen out about $20,000, which I bet she wishes she could have back right about now.

At Heather’s house, she’s trying to give Ashley a birds-and-the-bees but Ashley is 17 years old. She gets it. Heather tells us that when her girls were younger, she explained sex through the (mis)adventures of their cat, Stormi. Stormi got out while in heat and came home a new woman-cat:

Our own little Aesop, Heather warned them, “Stormi got a little taste of the world. Stormi never went out again.” I would like a book of morality tales by Heather, hopefully not all at the expense of poor Stormi.

Heather double checks that Ashley understands condoms and Ashley runs away with a “Boobie Beer Pong” kit in hand, which unfortunately, made it out of the conversation unscathed.

Conspicuously, Lisa invites Whitney and Justin for a double date at the restaurant of the caterers who canceled for Angie's casino night. Aubrey, half of the chef duo, comes to the table to explain how they had to cancel the event for restaurant/non-Lisa reasons. Whitney sees right through the act, which wasn’t hard because Aubrey did not play it cool.

I suppose all the things are true. The caterers did have to cancel irrespective of Lisa’s meddling, and Lisa is trying to prove her innocence by inviting Whitney to their restaurant and Whitney is a conspiracy theorist. In a confessional, Lisa says, “She thinks she’s on C.S.I., like, Salt Lake City.”

Whitney is spiraling and spinning her hands in an attempt to fix her aura(?), but in my experience, there’s nothing that will fix an aura faster than eating tacos. Whitney is hangry. Baby girl needs Mexican food to fix this.

Whitney asks, “How are we going to move on?” John has an idea:

In Park City, Sharrieff is working out with his and Jen’s 15-year-old son, Omar. Jen comes outside and talks to Omar like she’s speaking to him for the first time in her life. She keeps referring to herself in third-person as “Mommy” and it’s bewildering.

She wants to fix the relationship with her son, but she hasn’t really mentioned this before so I was trying to fill in the blanks. It seems she’s been pretty checked out for several years; Sharrieff is mediating and trying to help her talk to Omar. The whole thing felt stunted and weird—and it was only the third sad scene this episode.

Between skiing last week and tennis this week, Meredith is showing her prowess at country club sports and has looked great doing it. But one-sided tennis doesn't work very well, so they hang it up quickly.

They sit down to chat and Mary tells Meredith that she and Robert Sr. have slept in separate bedrooms for a long time. She says, “I might be wrong for this, but I would change Robert Sr.” And at first I was like, OK yes, most people would tweak a thing or two about their partner, but then she says:

Oh. So she doesn’t want to change a few things, she wants a whole different husband.

Mary and Robert Sr. should not be married because she can’t stand to be in the same room as him, let alone house, let alone marriage. Fourth sad scene of this episode: check. This is some dark shit and we’re not done, folks.

At Solitude, where I guess the show has an agreement since this is the second episode in a row they’ve filmed there, Jennie and Duy are cross country skiing. They sit down and talk about what a great mom Jennie is and how great their kids are. Duy apparently has zero EQ so he sees this as a perfect time to bring up that he wants more kids despite definitely knowing Jennie DOES NOT.

Like my five year old daughter, Duy must think that if he says this enough times, Jennie will give in to shut him up. But unlike my five year old who is simply asking to watch Bluey, Duy is asking for Jennie to punish her body and soul to bring another life into this world.

She asks him why he wants more kids. He says because the world needs more good people and they need to replenish it. The hair on the back of my neck stood up.

I would like to sentence Duy to work in a YMCA child care where he will smell like a Diaper Genie and wet Goldfish crackers for the rest of his sad purgatorial existence. Where his hands will always be sticky and he won’t even know why. Where he’ll always have smudges of old food on his shirt collar and he won’t know from whence they came. Then, and only then, can he talk about replenishing the Earth.

Jennie had ten miscarriages, she went through infant loss, her tubes are tied, she’s well into her 40s, her youngest child is almost ten. SHE DOESN’T WANT TO. It’s just so insane when you spell it out. This woman has suffered so much loss and I honestly can’t type one more word about it because of the rage coursing through my veins.

Duy cries talking about the emptiness he feels and his deep sadness because of the loss of their daughter. I don’t want to take anything away from that. But pressuring your wife to have another baby isn’t the way to heal. Men will literally bully their wives into a pregnancy instead of going to therapy.

Now, you’re gonna need to sit down for this next part. Duy suggests a surrogate or adoption, but that’s not an option because, once again, Jennie does not want more children. So Duy faaarrrrr too casually brings up—ON CAMERA:

When Bravo showed this clip in the trailers for the episode, I thought Duy was misspeaking and he meant surrogate. I thought, surely no. This is a slight of hand because we’re in Salt Lake and polygamy and ha ha. But nope.

I do think it’s funny that polygamy had to rear its head on this franchise. Do I think it’s ironic that it was brought up by someone without ties to Mormonism? Yes. Jennie says to Duy:

She says in a confessional, “If murder was not a felony, he would have been dead on the snow.” Duy replies, “It’s for our family.” Before storming off, as she should, Jennie sums it up:

Welp, that was a real dooz. Let all of that marinate and I’ll see you next week with what I hope to be lighter Housewives fare. Previews show Angie falling on her ass, so I’m looking forward to that. Until then, listen to Hive Mind’s RHOSLC weekly episode recaps from The Beehive.

This Is the Place (For Burgers, Fries, and Shakes)