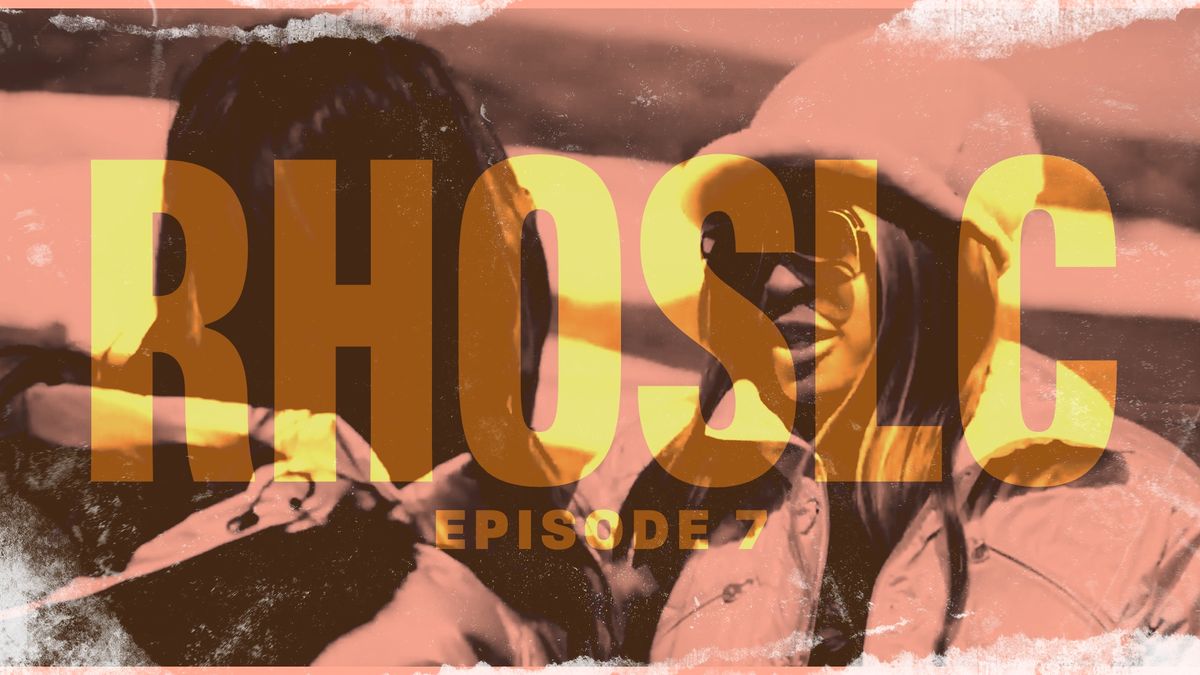 Welcome back to Salt Lake City for the most Utah episode thus far of a series set in, of all places, Utah.

I knew it was gonna be good when Whitney calls the group (plus a couple dingleberries) to invite them to go tubing at Soldier Hollow:

This is the Utah I know. I wanna see the thing outside the aquarium abduct and probe the ladies during a group event. I wanna see them navigate through 200 double jogging strollers at City Creek just to get unlimited French toast at Kneaders. We’ve been denied Kilby Court. Chuck-A-Rama. Fat Cats. All the places they will not go!

We meet Lisa picking up her son Henry after school. They’re off for a classic Lisa fast food crawl:

Like Henry and Lisa, hitting up three consecutive fast food establishments is a hobby of mine. However, no one has called me “baby gorgeous” before and I’m choosing to take that personally.

Next, Jennie and her husband Duy are out for an awkward oyster date. She says they haven’t talked much since he proposed adding a sister wife to their marriage. It’s hard to hate a guy with a name like Duy, but he’s managed to make it very possible.

Jennie gets right to it and asks him why he wants an actual sister wife simply because she doesn’t want to have more children. Duy acts put out like he wasn’t the one to suggest the sister wife, and on camera no less. This man is an idiot, amongst other things.

Duy asks, “What other solution is there?” Reasonably, Jennie says, “You think having a sister wife is a solution? Isn’t it illegal to have multiple marriages?” Lil’ Elle Woods has been doing his research:

All the while, Duy is acting annoyed like he’s having to explain something so basement-level common sense to Jennie like gravity, seat belts, or why Swedes undeniably write the best pop songs. This is a bad man. And not in the hot way.

I want to be culturally sensitive when Duy says that polygamy exists in many cultures around the world. But the main problem is that Jennie does not want what Duy is proposing.

Jennie continues to ask pertinent logistical questions, like how does this all work? She does end up backing him into a corner where he almost admits how weird it is:

He reiterates that the whole reason he wants a plural marriage is because the goal is to have a big family. WHOSE GOAL, DUY? WHOSE GOAL?!

The conversation takes an emotional turn when Duy tells Jennie that he feels an emptiness since the loss of their infant daughter. Jennie tells him he could begin to heal by seeing a therapist. He does not take this well:

They take part in a favorite pastime of Utahns, discussing Utah real estate. They’re deciding where they want to buy. Seth only cares about one thing:

Meredith says that before they went to the couples counseling that ultimately saved their marriage, they went to “discernment therapy,” which I had to Google because I thought it might be whatever energy-air fluffing thing Whitney was doing last week. (Spoiler: she does it again this week.)

But Meredith and Seth are much better now, despite Seth’s best efforts to repel her with his bad teen sex comedy humor. In fact, Meredith seems into it. I mostly understand the inputs and outputs of Meredith’s humanoid personality, except for this one glitch.

At Beauty Lab + Laser, Heather is setting up for a party. It’s hard to explain, but it’s a first birthday party for the babies of all of her employees who had baby boys at the same time last year. We got babies Russell, Grey, KJ, Remi, and Van, of course. Remember what I said about this being a very classically Utah episode? I love this for us.

Angie shows up to the party because she wants to be on camera. She looks great. She gets wasted:

Babies aside, Whitney sits down to recount the tale of her confrontation with Lisa at the caterers’ restaurant last week. It is a tall tale:

She tells Angie that although Lisa has moved on with her personally, Lisa wants nothing to do with Angie even though they have a 20-year friendship. But they’ll both be going tubing so Angie can confront Lisa head on.

At this point, Angie is seeing ten babies where there are five. Whitney tries to make aura fluffing happen again:

But all the aura fluffing in the world can't save drunk Angie from falling on her ass:

Next is the great day of the tubing. Finally a group event! This is an ensemble show, but we've been missing the ensemble. Heather, Whitney, Angie, and Jennie meet at Sugar House Park in Salt Lake for Mary to pick them up.

Mary says she rented the bus because the drive to Soldier Hollow would take two hours round trip. Sure. I’ll give her that. But she didn’t take into account our girl Angie. It’s time for some forensic Google Maps-ing.

Angie lives in Provo. She drove an hour to Salt Lake to meet the girls (and the cameras) and then she got on a bus to go pick up Jen, Lisa, and Meredith in Park City a half hour away and then they drove another half hour to Midway where Soldier Hollow is. That is two hours one way. Almost 100 miles one way.

Sure, Angie could have just met the gang in Midway—a 35-minute jaunt from Provo—but then how would she maximize her filming time? She ain’t here to play. This girl means business. She earned every minute of those four hours of filming by sitting on that party bus enduring the nonsensical squabbling about to ensue.

On the bus, everyone is in a mood. Driving over a mountain pass crammed in the back of a party bus with God-knows-what on the seats from God-knows-where will do that to you. Lisa isn’t too pleased to see Angie. She says in a confessional, “I forgive and forget, and sometimes it means I forget you.”

They’re passing around drinks and Heather references a time when Mary said, “Carbonation hardens your ovaries.” As Mary is wont to do.

Lisa offhandedly says, “Mary, I need to Google that. Is that real? Is that a thing?” Mary does not take kindly to the suggestion that she ought to be fact-checked. She snaps back, “Everything I say, you gotta Google it?”

Mary just doesn’t like Lisa and wants to fight with her. In a confessional Mary says, “How about we Google what she says because most of the time she’s lying.” Then she does that thing she always does when she’s shady—she pretends she didn’t mean to say the thing and does a Steve Urkel impression:

The group unloads and gathers in the most ridiculous collection of designer winter wear Midway has ever seen. A seance circle of fluffy winter hats. Now, it is clearly spring. There is grass on the ground. But they’re dressed for the planet Hoth. Everyone is grumpy because it is 60 degrees and they're roasting their insides beneath five layers of fur and down.

Jennie tries to lighten the mood and rally the troops:

Then Mary picks a fight with her for swearing. Jennie is dealing with a lot, to put it lightly, and doesn’t have the patience. Jen and Heather boob bump in celebration that they’re not the ones fighting this time:

Finally they get out of the parking lot and to the top of the hill. Mary is [still] mad because she didn’t get to wear a cute outfit. Heather checks on her to see if she’s OK after her fight with Lisa, not 15 minutes prior. Mary says she’s “squashed it” because moving on keeps you youthful and:

After a tubing race, they head to the lodge for some lunch. Jen asks Lisa if she and Mary have moved on after their fight on the bus and it seems like everyone is good. But Angie didn’t drive four hours roundtrip for everything to be good.

She tries to get Lisa to apologize for the catering thing. Lisa is hurt because Angie—her real friend, not just a TV friend—accused her of sabotaging the event. Lisa reaches her breaking point because she feels like everyone is ganging up on her, which they kind of are:

Lisa is also hurt that her two good friends, Jen and Meredith, are silent while she’s being attacked. Angie comes over in her silly yellow one-piece snow suit to comfort Lisa and make up. And so she could get her outfit on camera one more time.

We finally circle back to Jennie after her blow up with Mary in the parking lot. She explains she’s feeling sensitive because it’s the anniversary of her daughter’s death. The ladies try to comfort her with their vocal fry and pointy acrylic pats on the back.

Lisa says she doesn’t know why Jennie is being this vulnerable with the group:

Thankfully, there is something that can comfort them all and numb the pain after an emotional, cantankerous day:

I have a feeling the peace won’t last.

Fingers crossed Angie makes it back to Provo before the next episode—but until then, listen to Meg and Emily on Hive Mind’s weekly RHOSLC recaps from The Beehive.