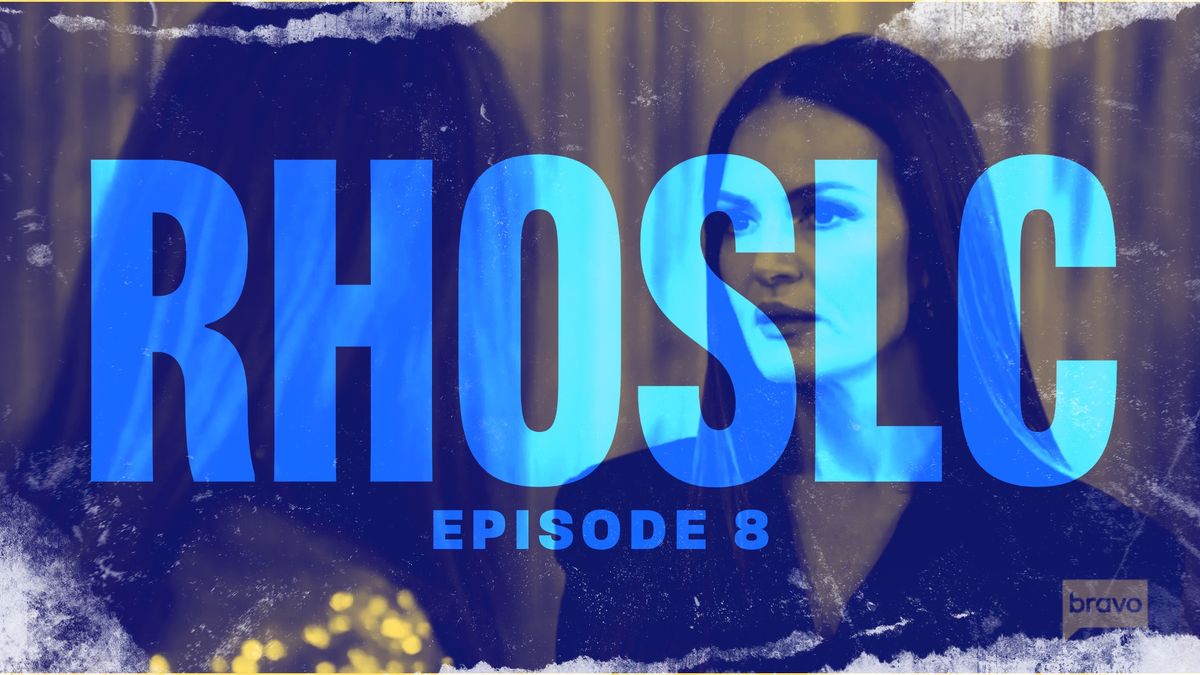 Back in our beloved Salt Lake City, the RHOSLC editors have made some fascinating opening B-roll decisions. For example, by highlighting the natural wonder of the back of this strip mall:

Reminding us that they think Jen and her assistant/alleged co-conspirator Stu are guilty of fraud by showing us the most disturbing employee–boss interaction since Succession’s Boar on the Floor:

Jennie’s daughter pooting on camera, a bodily function that is fast becoming the eighth Housewife on this program:

And Meredith placing herself on the right side of herstory:

In Park City, the Barlows have ~arrived~ at an event space where Jack, a 16-year-old boy living in Draper, Utah, has chosen this ensemble to appear on camera:

While watching reality TV, I’m on a side quest where I take note of what normals have chosen to wear to appear on national television. Young Jack has overthought and overworked a look meant only for European social media micro-influencers.

At this event space they’re preparing for a sponsored charity event for Utah Foster Care and the launch of Fresh Wolf, a men’s grooming line Lisa’s children “created” last season. As we’ve seen before, Lisa is a bad liar:

We don’t let children vote or operate heavy machinery; and likewise, we shouldn’t allow them to name their own brands lest we wind up with another Fresh Wolf. Or Meta.

Next, Mary shows up for lunch with Heather and Whitney looking like a five-year-old who put on everything in their mom’s closet:

In a dream world, I would meet Heather at an Italian restaurant where she would greet me like this and order for me:

The chef says he’s going to serve the ladies salmon ceviche-style and a look of displeasure washes over Mary. She says if she eats raw fish:

Heather and Whitney probe into why Mary got so upset when Lisa said she was going to have to fact-check whether, in fact, carbonation hardens one’s ovaries.

Mary says when someone questions her, it’s a trigger because her mom questioned whether she should marry Robert Sr., her step-grandfather. I don’t know! Seems reasonable! But Mary and her mom’s relationship was severed because of this and they haven’t spoken in 25 years.

It’s insane that Mary is equating Googling whether carbonation hardens ovaries and whether she should marry her step-grandfather so she could take control of her grandmother’s empire. But—it’s Mary.

Team Bad Weather tells Mary she’s gotten her first bad taste of Lisa, but Mary has already moved on. Whitney and Heather are on an anti-Lisa crusade to promote their anti-Lisa agenda.

Back with more promo, Lisa is at a Fresh Wolf photo shoot where young Jack is calling the creative shots. He is dressed like Steve Jobs:

Suddenly, Jen appears wearing a wolf on top of her head. It was at this exact moment I knew Jen had officially jumped the shark:

She says she bought them at a fur gallery, and I guess wrongly assumed we as a society weren’t doing animal fur anymore?

Wolf heads aside, Lisa and Jen sit down and Lisa has an agenda of her own. She brings up the leaked audio of Jen screaming at her former dress designer. Lisa says  the designer posted on Instagram that Whitney gifted him some of her Iris+Beau product. Lisa is trying to make Jen mad at Whitney and ask Jen’s permission to confront Whitney.

Normally when Jen starts scream-crying, I zone out—but I had to rewind because this time she was scream-crying about not caring about what Whitney did. Jen yells that she is wanting to move forward. It was disorienting because she was right?

At this point in the episode, I was feeling like this:

The way all of these storylines are being brought up is feeling verrrrry overproduced. First it was Whitney and Heather trying to instigate trouble between Mary and Lisa, now Lisa is trying to cause problems with Jen and Whitney. I don’t like it.

My favorite Housewives moments are the naturally weird ones like Mary’s deranged home tour, or Mary pooting, or Mary telling the story of the parishioner who flew out of a sunroof. OK, all these examples are from Mary, but you get the point. We’re not dumb—we can tell when the world’s worst actor (Lisa) is bringing up a produced storyline.

Just when I thought I was done complaining about produced storylines, here comes Whitney:

Whit rollerblades into frame wearing a bright pink matching shirt with her brother talking about their “Blader’s Club” from when they were kids. Listen. There isn’t a 30-something in America who didn’t have a rollerblading club with their siblings. I cannot overstate the impact of not one (Airborne) but two (Brink!) inline skating movies from the 90s.

They sit down to catch their breaths and catch up. Because there’s no better time than blading around Daybreak with your adult brother on camera to address your father’s battle with addiction.

We followed Whitney’s dad’s journey last season as he worked toward recovery. Whitney says he’s not sober anymore and they haven’t spoken in six months, but he’s maintained a relationship with her brother. It’s sad and makes me wonder if his story being a focus of the show last year has anything to do with their lack of communication now.

Downtown, Heather and her daughter Ashley are meeting up for a mother-daughter lunch with Meredith and her daughter Chloe. This is very reminiscent of old school Real Housewives of Orange County when the daughters were a big part of the show. I’m into it.

While young Jack has chosen to dress like a faceless Zara mannequin whilst on camera, Ashley is choosing to disregard weather in general, which is frankly disrespectful as the daughter of one half of team Bad Weather:

Ashley and Chloe discuss Greek life at college. We know Heather never had a day of fun in her life until she left Mormonism, so she sees this as a perfect segue into “Poor me, no Greek life at BYU . . .”

The story is strange, meandering, and ends with Heather winning a singing competition on a booze cruise, but I can’t complain because I just said this is the type of nonsense I’m looking for in Housewives. I’ll take what I can get.

Meredith uses this opportunity to invite Heather and the ladies on a trip to Vail where she’s rented a house big enough to accommodate everyone.

My ears perked up when I heard “Vail.” Do you know what that means? It’s almost time for the Jen arrest, which happens when they’re on the party bus about to leave for Vail. Next week is our Super Bowl.

It’s the day of the Fresh Wolf charity event. Lisa has curated an intimate guest list, so there are not enough invites for the entire cast of the reality TV show she's filming. But enough for the camera crew and two of Meredith’s children.

Meanwhile, two of the uninvited, Heather and Jen, get together at Heather’s house. Jen has brought a bag of sex toys and other bachelorette-party fare for Heather:

Jen tells Heather about Lisa trying to stir the pot and tattle on Whitney. Heather says, “I find it highly sus that she pointed out to you that Whitney was a shit friend.” She then says that Lisa only invited Whitney and Meredith to the Fresh Wolf event and not Jen—who bought two wolf heads on behalf of Fresh Wolf!

All the grenades clumsily thrown in the first half of the episode are detonating. Heather and Whitney have accused Lisa of being calculating, but calculators are always right. Lisa, on the other hand, has made some misjudgments by trying to play Housewife and producer.

Back at the event, Lisa pulls Meredith aside to introduce her to Cam, who was a preacher at Mary’s church for seven years. He cryptically warns Meredith about Mary and her church and tells her to “be careful” and “the truth was revealed.”

After the episode, I learned that Cameron passed away in June of this year. Meredith tells Lisa their interaction was “intense,” “bizarre,” and “unsettling”:

Lisa says that Cam told her personal things about Mary and the church, but she doesn’t “want to speculate, especially tonight.” Because we must keep Fresh Wolf business and reality TV business separate. Business over business.

And it is on that ominous note we conclude an extra spooky, extra produced episode of RHOSLC. I am curious and scared to see what is revealed about Mary and her church because, as Mary has vowed every week:

Until next week, listen to Meg and Emily on Hive Mind’s weekly RHOSLC recap from The Beehive.