RHOSLC Season 2, Episode 9: "It's Not About Sharrieff" 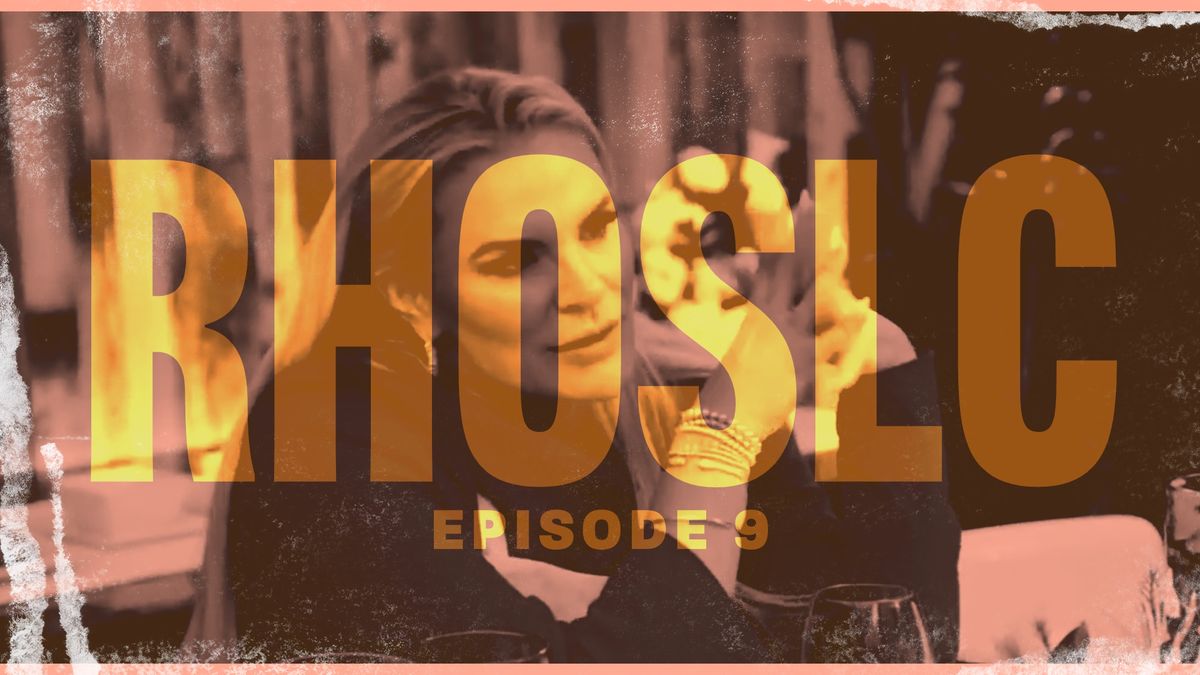 From the first two minutes of this season—a flash forward to what transpires at the end of this episode—my expectations have been high. But when are expectations met? I’m a Millennial in the year of our Lord 2021, and my expectations are accustomed to a subpar, subfloor basement apartment worth $900,000.

But no. Today Bravo overlord Andy Cohen was a benevolent god—“I cannot give you an affordable mortgage and a house with two and a half baths and sustainable landscaping, but I will give you this, my child: a perfect episode of reality television.”

It all starts with Mary looking into a vanity mirror to ask who is the fairest of them all. The mirror replies: “She, the Wild Rose.” So Mary, who is dressed like the villian in a Disney Channel Original Movie, vows to murder Whitney. Rhetorically, of course.

Mary calls her fellow cast members to invite them to an Italian cooking class. She is upset that Whitney doesn't answer, but presses on.

The dress is “Italian street fashion” because, according to Mary, it is “simple and chic.” Like Mary. Always simple and chic, that one. She says she chose that theme because she is skeptical of the other ladies’ fashions. “Most of the time, I have no clue what they’re wearing.”

Mary does not invite Angie nor Jennie because she “doesn’t care for Jennie.” So she shades them by holding their screen time hostage.

In a scene that is a personal nightmarescape of my religious anxieties and obsession with the Housewives, Heather and her daughter Ashley meet Heather’s niece Caroline and her husband for lunch.

Similar to Heather, Caroline is navigating a faith transition and leaving the Mormon church. I guess I wasn’t prepared for the inside-baseball, nitty-gritty workings of complex family and church dynamics, all at a breezy tasting-menu lunch.

Heather explains the three degrees of heaven in Mormon doctrine and says that leaving the church means she’s doomed to “outer darkness,” a place like unto hell only reserved for those more depraved than serial killers.

As a practicing Latter-day Saint, I definitely don’t think Heather’s commentary is doctrinally accurate, but does it matter? Heather’s truth comes from an enmeshing of church and culture and a lay ministry who can say whatever they want in whatever rando lesson or talk and that’s the way the church works, for better and for worse.

I do worry about little miss Ashley getting so much screen time—she’s had more than cast member Jennie. Heather is a grownass woman who has the prefrontal cortex to contextualize talking about her faith transition on reality TV, but Ashley is 17. Let’s get Ash to senior prom and let her work out complicated feelings toward religion and its practice off-camera.

Next, Jen and Stu go snowshoeing because Jen’s therapist told her to “make new memories and spend quality time” with those she loves. Like Stu? Quality time quickly turns into Jen ruminating on the sacrifices she’s made “to set up all these businesses and companies.”

Jen is the hollow shell of a “Girl Boss” driftwood plaque discarded on clearance at T.J. Maxx. She’s the Housewife Rachel Hollis, minus a defunct lifestyle brand, plus an indictment or two. She says, “I did it so that we could take care of employees so they’d have something today, and if I wouldn’t have sacrificed that . . .”

In this economy? When employees are realizing they don’t have to be a Stu to a Jen just to make a dollar? She tells Stu, “I appreciate you sticking with me through the bad times, the good times, and I hope you realize too, like, the sacrifices I made . . .”

Jen says of their relationship:

The context in which this scene is beautifully nestled is all too rich. Jen is trying very hard and very poorly to position herself for a redemption arc this season, but little does she know what is on the Beauty Lab parking lot horizon.

Mary insists on speaking with a whack Italian accent. I can only presume she is workshopping voice work for a Super Mario movie audition.

Mary tells Jen and Meredith that because Whitney didn’t answer the phone when she called to invite her to the cooking class, she sent her a different dress code of “mafia streetwear.” A mean-girl move so nonsensical it could only come from Mary’s mind.

Meredith calls it as she sees it:

Mary is adamant that calling Whitney four times and Whitney not returning the call is grounds for public flogging and humiliation. She says, “Yeah, you need a punishment for that. Show respect.” Something an alleged cult leader would not not say.

Heather picks up Whitney for the event and they quickly figure out Mary’s machinations:

When Whitney shows up looking great and Mary’s stupid plan is foiled, Mary is pissed:

Whitney explains she was driving carpool so she couldn’t answer Mary’s calls. But none of that matters. Science and reason can’t unravel the twisted mind of Mary M. Cosby and it’s a fool’s errand to try.

Lisa arrives in a Carmen Sandiego costume. If Mary is going to be mad at anyone, she should be mad at Lisa for misunderstanding the assignment.

In a callback to last season when Mary gave the ladies Louis Vuitton earbuds, she brings out Louis Vuitton gift bags and they think they hit the lottery, or at least a lucrative re-sell market on eBay:

The ladies put non-Louis Vuitton personalized aprons and chef hats over their already ridiculous ensembles and head over to Chef Giuseppe to begin their cooking class.

They sit down to eat their creations and Mary jumps on Whitney again for not answering her phone calls. Then Jen drops a little grenade and asks Lisa how the Fresh Wolf event went. (The one she wasn’t invited to.)

Lisa is defensive and says Jack and Henry—who are children—made up an exclusive guest list only big enough for Meredith and her children, Whitney, a smattering of other adults, and Cameron, a former pastor at Mary’s church with a grudge.

In apparent retribution for not being invited, Jen tattles on Lisa for telling her that Jen’s former assistant, who she verbally abused, insinuated on his Instagram story that Whitney sent him free product to promote.

Whitney corrects Lisa and says she told her team specifically not to send him free product, and this is all of his own accord. Whitney suspects . . .  you guessed it . . . a set up.

Lisa is always telling people they are misinterpreting her, but at some point, if you’re pointing a finger, you have three more pointing back at you. Morpheus has sage wisdom to bestow: “Sometimes people are invited to something . . .”

In an expert deflection, Lisa makes this about Jack and Henry:

They cheers to their upcoming trip to Vail and Heather asks the important question:

For no reason than general disdain, Mary goes for Whitney once again about the missed phone calls. She cuts her off, dismisses her, and things escalate:

Mary tries to kick Whitney out:

Whitney yells, “Mary Cosby, I have had your back more than any other woman in this room!” It’s very romantic. In an unhealthy Nicholas Sparks sort of way.

Meredith whisks Whitney away and warmly, motherly fluffs the air to calm her down. In a confessional, Whitney reads some of the mean texts Mary has sent her. For example, “Everything is fake. I’ve never had plastic surgery, never . . .”

In a cinematic line reading for the ages, Meredith reveals she had a bizarre, cryptic conversation with Cameron about Mary’s church at the Fresh Wolf event. Whitney tells Meredith she’s close with Mary’s cousin who told her to “be careful” with Mary and:

Whitney says that at Mary’s church, the congregants believe that Mary’s grandma possessed the power of God and when she died, her power was passed down to Mary. If I believed I were God and got others to believe the same, I would want a better representation of my godlike self than whatever-in-the-Jon McNaughton this is:

Meredith and Whitney come back to the table where Mary tells Whitney that they are not actually friends. Whitney says in a confessional, “Maybe she just loved having a minion, and moving forward, I will no longer be her little soldier.”

Three days later, Heather is packing the essentials for the fated Vail trip:

And Jen has packed a zoo’s worth of fur hats for a two-day trip:

Or so she thinks.

In the Beauty Lab + Laser parking lot, in a strip mall next to a Dollar Tree, the gals are loading up the bus for a road trip to Vail. Heather calls Mary who tells her she’s flying private and will meet them there. She is blowing thousands of dollars to avoid road tripping with Detective Whitney.

Whitney and Jennie arrive, then Jen in the box braids we’ve seen in the tabloids since March. Finally Lisa rolls up in an Almost Famous-like coat I would have made my whole personality in 2008.

The fourth wall is broken and we see production installing cameras in the bus. With 11 minutes left in the episode, Jen gets a call from, presumably, Sharrieff:

She asks Whitney to turn off her mic before heading outside while still on the phone. She tells Heather she has some bad news: “I just got a phone call and Sharrieff Sr. is in the hospital. He has internal bleeding, so I need to go.” Heather asks her if they need to stay and wait for her, but Jen urges them to leave without her.

There’s been lots of talk online about Jen’s hospital lie, but what is she going to say? That the feds are after her? She did sound like Erika Jayne fumbling Tom's burglary story, but what’s a girl on the run supposed to do?

Jen’s assistant #2, Murilo, throws Jen’s bags into the bed of what the chyron tells us is Jen’s aunt’s pickup truck and they drive away. Outside the windows of the van, we see police, SWAT team members, and Homeland Security officers surround the bus, but the ladies don’t notice yet. The cameras show producers talking to the officers:

At first Whitney thinks it’s all a prank. But while Heather talks to the officers, Whitney and Lisa put the pieces together:

Once the ladies realize the police are looking for Jen, Lisa calls Stu, Jen’s assistant, who is now (legally) so much more than just her assistant. Heather suggests calling Jen to let her know officers are at Beauty Lab looking for her, but Lisa, ever the strategist, thinks otherwise:

And for once in Housewives history, there is a legitimate reason to end an episode with:

Listen to Meg and Emily break down the drama on Hive Mind’s weekly RHOSLC recap from The Beehive. We will be back next week to recap what Andy Cohen has called one of the greatest Housewives episodes ever.

Will The Real Michael Jordan Please Stand Up?