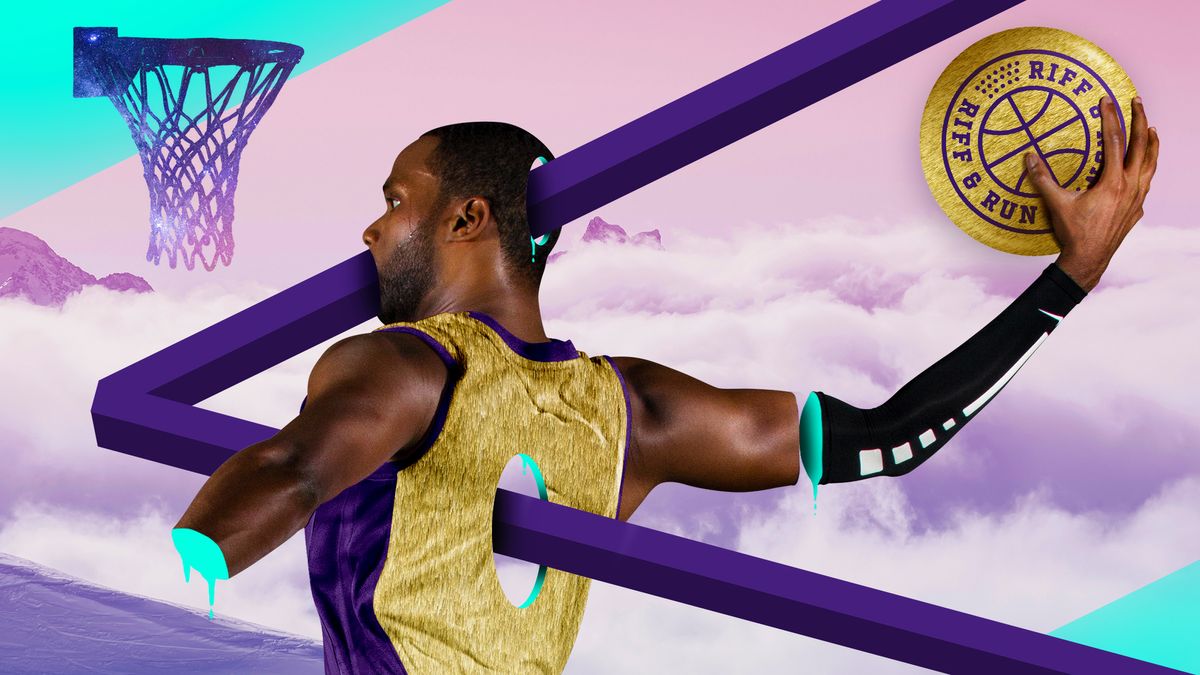 You can read Volume 1 here.

October 19, 2018: Warriors-Jazz. Booing Draymond Green is an ecstasy rush and pain reliever rolled into one, an opioid alternative if ever there was one. How are doctors not writing prescriptions for this already? Did I just solve the opioid crisis? If somebody screws their back up lifting a table at work, send them to Vivint Smart Home Arena when Golden State is in town and make sure they boo Draymond 2-4 times every hour for three hours. Not only will their ailments be cured, they will experience the pure euphoria of hurling insults at a swaggering, gigantic man-baby. I booed Draymond for the better part of the game and my white blood cell count multiplied. I shouted, “SIT YOURSELF DOWN!” and my hair increased in thickness and vibrancy. By the fourth quarter, it had become so long I was forced to buy an extra seat and call it by its Christian name. By the end of regulation, I had spent $20 on Dippin’ Dots and R&R which my hair consumed greedily without a word of thanks.

The Jazz lost their home opener to Golden State on a last second tip-in by a man named Jonas. It was a modern tragedy. The crowd was rocking all night, the Jazz draining threes and parading cross court, Joe Ingles talking trash to any and all living beings. It was a perfect setting for Jazz victory until the long arm of Jonas snaked in a bucket as time expired. Talk about buzzkill. We went from 100-decibel screams to stunned silence as Jonas celebrated with shirtless Andre Iguodala in front of the Jazz bench. Even my hair was bummed out, crumpling up an R&R wrapper with disgust and throwing it into the Warriors’ mosh pit. I gave one last half-hearted boo to Draymond and shuffled out of the arena alongside 20,000 dejected fans. What a perfect way to start a season.

November 2, 2018: Grizzlies-Jazz. I just witnessed the season’s second Grizz-Jazz rockfest and my stomach is queasy. These games should come with a surgeon general’s warning: do not consume on empty stomach. The Jazz have lost both, scored a combined 184 points, and I have three ulcers from attending. As soon as I have a doctor’s bill it’s going straight to Gail Miller.

Donovan Mitchell is injured and the world has ended. What did we do to deserve this? Is it because I threw circus peanuts at Marc Gasol and made vomit noises every time Mike Conley’s hair ran by? Aren’t the ulcers bad enough? Now we have to watch the Jazz break backboards without their best scorer? Who’s going to hammer dunk on Lonzo Ball? Who’s going to nail dagger threes and swagger into the waiting arms of suit-wearing Raul Neto? Who’s going to perform elaborate 12-step handshakes with each member of the starting lineup? There are no easy answers here. Even with Mitchell on the active roster, Utah has struggled — without him, they’re lost sheep wandering Skull Valley until the nerve gas settles in.

There is one positive takeaway from tonight’s game: the team intro is phenomenal. Last year featured “Feeling Good” and two fountains of fire. Every time I heard the line “Birds flying high” my hands would start to shake and saliva would drip from the corners of my mouth. This year features “Runaway” by Kanye, two fountains of fire, and the results are similar. The first time I witnessed the entire intro — song, fire, hyped player high fives — tears rolled down my face and pooled into a faint, watery silhouette of Deron Williams. Tonight was slightly different, the piano started and I lost control of my sinuses. Mucus was everywhere. I grabbed a tissue, blew, and took a quick peek at the damages: a snotty version of John Crotty, knee brace and all, scooping an underhand pass into the third row.

November 5, 2018: Raptors-Jazz. Toronto hammer-dunked Utah tonight. The Jazz are 4-6 and my headache has gotten so bad, no amount of Diet Coke can cure it. Mitchell was out again and we received an unhealthy dose of Alec Burks, aka Houdini. He’s the Gob Bluth of NBA players, content to turn 20 ill-advised field goal attempts into 100 pennies. Burks scored 22 and with each field goal attempt, it felt like he was reaching inside my trousers and pulling out knotted handkerchiefs of every color. It never ended — he just kept shooting and shooting, the handkerchiefs kept piling up, and before long we watched both teams run up and down the court in a silken wonderland. Think Alice In Wonderland meets NBA basketball, only this acid trip ends with Utah two games below .500.

Grayson Allen has tripped no one through 10 games and I’ve never felt more betrayed. I was promised a bad boy, someone who pops their collar and humiliates opponents with wedgies, swirlies, and wet willies. Instead, I’ve been given a choirboy. Allen looks like he’s squeezing basketball between Mormon Tabernacle Choir practice and in both cases he’s an octave too low. The Raptors pushed him around all night. After Allen missed his third straight three, he shuffled down the court humming “Nearer My God To Thee” as a single tear rolled down his face. It was embarrassing. I joined in on the third verse just to let him know he’s not alone, but forgot the words and ended up singing a solo rendition of “Put Your Shoulder To The Wheel.” By the time I got to the third verse, the lady next to me took pity and added her soprano to my bass. As we closed out the sixth verse with clear-throated harmonies, our entire section gave us a standing ovation and bought us XL banana splits to celebrate.

I’m beginning to get a strange feeling about this season. The Jazz are grubbing their way through games while other teams (Denver, Portland, Toronto) are thriving with defense and depth. That’s Utah’s formula, though they seem to have forgotten the important parts of the equation. Remember when they used to play defense? That was cool. Nowadays, every game ends with the opposition north of 110 and it’s depressing. I want Rudy stuffing people into the basket. I want Grayson Allen tripping people, even if it’s teammates or Quin Snyder. I want Rubio tucked inside somebody’s hip pocket until they toss him into the first row and Jae Crowder tries to start a fight. I WANT JAE CROWDER TRYING TO START A FIGHT. At this point, I’d settle for feeling anything. The Jazz bear could show up in my bedroom with a whip and high heels, stuff a ball gag in my mouth and call me scum, and it would be better than this current hellscape.

November 9, 2018: Celtics-Jazz. I just spent three hours booing a muscly white man with coiffed hair. It was great. Gordon Hayward was so flustered one of his hairs fell out of place. What a loser, I laughed, he abandoned Utah and now he can’t even groom his hair properly! I’m glad he’s gone. I could never root for an NBA semi-star that looks like a mangy dog — my standards are too high. I spend two hours every morning staring into a mirror to remember how imperfect I am. I just stare. Then I spend two hours grooming — trim my beard nice and tight, set the wave in my hair, empty a bottle of product to keep everything in place — and two more hours staring at my perfection. It’s a six hour cycle and I can assure you, Gordon Hayward knows nothing about it.

The crowd was a steady mix of anger and disappointment. We booed Hayward every time he touched ball, shook our heads at his molasses movements — slow, lethargic, a mopey shuffle of haystack hair. All this League of Legends is catching up to him. I wouldn’t be surprised if he goes full Kirilenko and gets a nine-tailed fox tattooed across his entire back, retiring from the NBA so he can argue with 13-year-olds through an online mic. On the bright side it won’t matter what his hair looks like, he can let himself go and embrace his ultimate destiny: 16 hours per day of League, all meals eaten directly out of the can.

Ingles, Mitchell, and Crowder all scored 20+ tonight. Joe showed Hayward an old Jedi mind trick — if you play even slower, you actually become fast. Hayward is at the normal slow stage, if he learns how to play even slower he can find success. Ingles is at the super slow stage and he’s tricked opponents into thinking he’s found warp speed. Mitchell did all the things that make him Utah’s favorite son — he didn’t play any video games, he didn’t pack a pocket mirror to make sure his hair was styled correctly, and he didn’t publish a 2,000 word Players Tribune essay ranking his top 10 characters in League. He just balled. He picked up a basketball, drained some jays, created open looks for his teammates, played a little defense, and didn’t worry when his internet connection lagged.