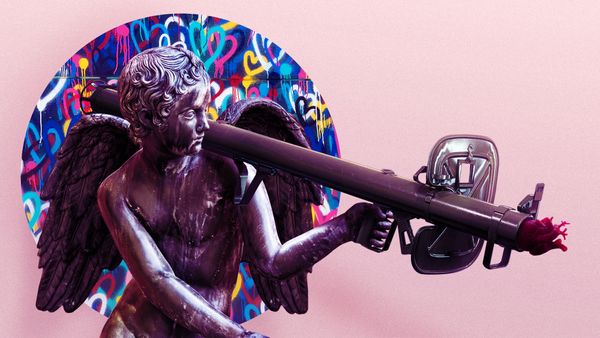 “She met him through the internet,” I heard a woman whisper in the tone of scandal. This was 1999 and I was fifteen. The woman was a family friend, and she was gossiping about a mutual acquaintance who recently found love.

We had really only recently even heard of the concept of online dating at that point. A few dating sites had popped up—places where you could, with great difficulty, scan a photo of yourself and fill out a substantial amount of personal information that other people across the world might then review. If they liked what they saw, they would send a message, and even propose a meeting. The system cut out a lot of the uncertainty. Everyone was there for love. Flirtation and propositions were expected. Wanted, even.

We considered the early adopters to be weirdos. “Why can’t they just meet people the normal way—in real life?” We assumed these internet daters had to resort to cyber desperation because they were undesirable enough that they’d die spinsters if they didn’t cast a global-wide net.

But worse than weird, they were reckless. Anyone could lie about themselves on the internet. Anyone could be dangerous. Behind every innocent-looking profile surely lurked a Ted Bundy, unvetted in the normal ways potential suitors are often vetted. There, on Cupid.com, true strangers were connecting and agreeing to meet one another based solely on written self-representations.

This was insanity. The women involved may as well have agreed to climb into a white van without windows.

The online daters knew of this perception as well. They were aware their efforts were peculiar and unacceptable to the general population. They mostly engaged in this unorthodox pursuit of love in shame. When a relationship arose out of these activities, they’d carefully avoid disclosing their origin stories.

“How’d you two meet?” prompted uncomfortable side glances. Sometimes they would say something like “Oh . . . through friends” before changing the subject. Other times they would admit it.

“Well, actually—and this is a little embarrassing—we met through LDSsingles.com.”

“Oh, that’s ok!” we’d respond in an over-compensating high-pitched voice that screamed “that’s definitely not ok” like they had just confessed their worst life decision.

Then we’d gossip about it behind their backs. “She met him through the internet,” we’d whisper the scandal to one another.

Suddenly it was 2013. I had been living out of the country for a year and had just moved back to Salt Lake City.

“Have you downloaded Tinder yet?” my friend Jolyn asked me.

I had never heard of such a thing, and I asked her to explain it to me.

“Oh, I would never resort to online dating,” I told her in a pearl-clutching tone. “Do I seem like someone who would have to use the internet for that?”

Jolyn rolled her eyes and told me only weird people weren’t using the app. “You don’t want to be the one loser who isn’t on this,” she said, holding up her phone and showing me a photo of, well, an extremely normal-looking man she was ready to swipe left or right.

I was confused. In a matter of just a year the game had changed, and I wasn’t sure how or why.

I downloaded Tinder and discovered that every single person in the greater Salt Lake area was on this app. They had selected five photos. They had written a brief tagline, usually uninformative but clever. They were accessing Tinder on a daily basis, communicating with their many matches, setting up dates, and doing all of this in the light of day like it wasn’t shameful.

“This is so much easier,” I remember a friend telling me after using Tinder for a few months. “I can vet people in my pjs without ever leaving the house.”

Before long Tinder became an addictive game for me. Gay Tinder drew from a much smaller pool than straight Tinder because there are only like nine of us in Utah. Each day I would swipe through ten or fifteen people before Tinder would let me know I had run out of profiles and would have to check back later to see if there were more.

It was exciting, and fun, and so not weird.

Eventually I came across a profile of someone named Skylar who had been on a one-hour layover in the Salt Lake airport. By the time I even saw his photos he was already off in another part of the country. His bio simply said “I’m not here to make friends. I’m here to be America’s next top model.” There were five largely uninformative pictures.

I matched with this person and shortly thereafter started an implausible long-distance relationship. Suddenly I found myself seriously dating a gay man in Wisconsin I met through a dating site.

“Oh dear,” I imagined my mother saying. “How dangerous.”

But this wasn’t dangerous. It was lovely. And easy. And it blew my mind on a daily basis that there was a less than zero chance that I would have ever met this person, who is now my husband, without this reckless dating site where a Ted Bundy could be lurking behind every profile.

Times had changed so dramatically since 1999 that not only could we casually tell others we had met through Tinder, but people just assumed as much unless they were informed otherwise.

Just last month a woman told me she met her husband at a bar. “Seriously?” I asked her in total surprise, like this was the stuff of a romantic comedy and I hoped she was considering selling the rights to her story. “Well, we had chatted on Bumble first of course, but then we happened to recognize each other at a bar so that’s when we met in person.”

I’ve heard people argue these apps have actually made it more difficult in some ways to find love. The amount of options exploded when we were suddenly given access to a thousand times the amount of people previously available to us. Last week a fellow writer from The Beehive, Meg, told me she sat behind a man at a sporting event and watched him swipe through a dozen profiles. Meg got married years before dating apps were a thing and has viewed this cultural shift with fascination. “He repeatedly swiped left on women who were definitely out of his league” she told me in bafflement.

When the masses are anonymously available to you, why not repeatedly shoot high?

There may be some merit to that criticism—the criticism that dating apps are causing a sensation overload that could be undermining the whole goal. I certainly understand the worry on some level. I complained to Skylar shortly after we started dating that I missed Tinder. Not because I wanted to date someone else, but because I was addicted to the game. I thought it was fun. I liked meeting new people. It’s never been a surprise to me that anyone would have a hard time giving that up for an imperfect relationship. It used to be easier to settle down and invest in “good enough” because we always felt like we were on the verge of running out of other options. Now with the help of phone applications, access to potential mates has reached a level of immortality.

“Maybe this is good enough, but what if tomorrow I find even gooder enough.”

It’s certainly possible dating apps have stopped a great many people from letting themselves experience lasting happiness in this way.

We all probably owe an apology and a thank you to those reckless pioneer weirdos from the 90s who made this happen for us.

Writer of itjustgetsstranger.com and a lot of embarrassing journals in the 90s.

This Is The Place Podcast: Jell-O With The Senator