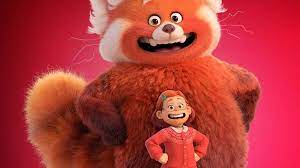 She and my six-year-old daughter were PUMPED to watch Pixar’s Turning Red after school the day it was released. (They’ve become quite easy to please after two pandemic years.) The seven-year-old has had a promo article about Turning Red Scotch-taped on her wall for over a month that she ripped out of Nat Geo Kids. She felt seen in a way we all long to be. An animated movie?? About a girl?? Turning into a red panda of all things??!

I was not an animal kid, nor am I an animal adult. Animals are to be revered, protected, and kept at a distance, IMO. But a mother’s love changes hearts and minds. My brain is full of schedules, bills, stupid memes, the lyrics of Eve 6’s “Inside Out”, and the choreography from Backstreet Boys’ “Everybody” music video. And also that a group of cheetahs is called a coalition, and how to hot glue together a Halloween costume that closely enough resembles a sugar glider, and that red pandas are the only members of their genus and a little too related to rodents for my liking.

No one told me about the facts on facts I would learn as a parent. And how much I would care about the things my kids would love.

I’m about the same age as the director of Turning Red, Domee Shi. The movie is set in Toronto in 2002 and the main character, Mei, is a Chinese-Canadian 13-year-old who is obsessed with a fictional boy band called 4*Town. (In true aughts fashion, there are five members of 4*Town.) She cares about the things many 13-year-old girls do: boys, music, friends, and trying to figure out how to grow up faster than her parents want her to.

Mei’s mother, Ming, cares about what many mothers of 13-year-old girls do: trying to figure out how to keep her daughter 13 forever. Something I’m learning about parenting is how easy it is for my passive thoughts to be about my children as they used to be at a different age or stage. This is why I can hardly mention the movies About Time or Arrival without welling up. Because no one told me about this part of parenting either.

It’s mental diligence to see my children as they are in the moment and not who they were, or who they’re becoming.

Like Disney’s Encanto, and most often like our own lives, there’s no villain here. The conflict is internal, familial, and complex. Ming wants to keep her daughter little; she wants to see her how she was. So when Mei hits a special kind of puberty—as Ming calls it, a genetic “inconvenience”—and turns into an eight-foot red panda, both mother and daughter need to reconcile Mei’s growing up and turning red.

Mei turns back into a human as she learns to control her emotions, or turns into a panda when she gets too excited or angry. There’s a ritual ceremony where Mei can encapsulate her panda spirit in a token like her mother did, or choose to embrace the panda and live with it forever.

As Mei makes more choices for herself and embraces her panda—the big, loud parts of her—Ming is angry and even turns into an enormous, scary red panda herself. Parents are not always good at or even competent at controlling their emotions. In fact, we often expect our children to be better at it than us.

When my oldest daughter was born, I envisioned a deep, instantaneous, emotional connection to her. I was surprised that for many months, my love for felt so duty-bound. I chose to bring this little, big life to Earth, so I must take care of this tiny person and keep them safe and fed, and warm. It wasn’t until my babies grew more into themselves, until I really met them, that I fell deeply in love and formed the bond I thought would be at first sight.

A parent-child relationship is like any other. It takes work and laughter and inside jokes and fighting and resolution and thankless service and growing together. Mei and Ming find peace as they forgive each other and honor each other as individuals.

Teenage girls, especially around Mei’s age, are magical. What else could describe the ability to care so much about a boy band it hurts, to love your friends so deeply you make them silly gifts and celebrate their weirdness in even humiliating ways, to be so full of light and courage you wear braces and glasses and start growing hair in weird places and still have the confidence to meet each new day. To shove pads in your backpack; to learn how to manage bleeding from parts that seem new and mystifying; to carry on at school while your insides feel like an eight-foot red panda. To see that your parents aren’t perfect and feel the heartbreak of disappointment, and the hope of fulfillment and love anyway.

It’s no wonder that menarche, fertility, and womanhood are so tied up in the stars and moon. There’s a mysticism because how else could these children do it? How else could we do it?

During the ritual where Mei and Ming either conceal their inner pandas or embrace them, they are in an ethereal forest on an astral plane. Mei meets her mother as a 13-year-old Ming, crying from the demands of meeting her own mother’s perfectionism. Her very large panda is born of that very large fear. Mei lifts up her mother and accepts this child, her mother, as she is. With age comes more moments to see your parents as they are—to find boundaries, yet forgiveness and understanding for your parents, while also seeking those things from your own children.

The joy of watching my daughters watch Turning Red was seeing them as they are. Six- and seven-year-olds who are smart, funny, quick to laugh, and increasingly complicated as their brains make more beautiful, messy connections.

I asked them what they thought the message of the movie was. The six-year-old said, “That it’s funny…and you can watch it so many times you forget about your other favorite shows. Like Cats and Dogs: The Revenge of Kitty Galore.” A discerning palate. The seven-year-old, the red panda-obsessed one, answered: “That you can be loud and messy and still special.”

My girls danced wildly through the closing credits, all bony joints, legs that all of a sudden seem so long, toothy smiles, and hair unbrushed (a daily struggle).  I saw more in Turning Red than them because I’ve seen more, but mostly I just saw them.