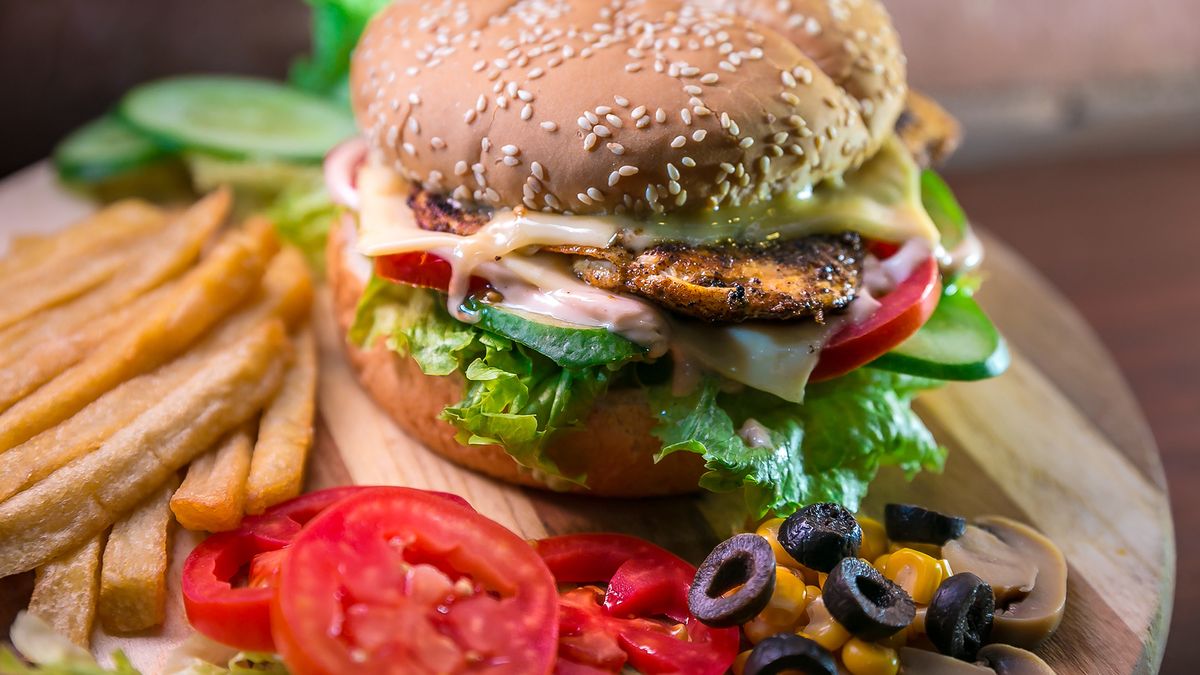 After 3 volumes of the Burger Diaries, I found myself repulsed by the idea of eating another burger. It had become too much of a good thing. One can only eat so many hamburgers before eating hamburgers starts to feel like a chore.

So I’m taking a small detour and going on a chicken sandwich journey to find the best fried poultry patty in the land.

The first is the Pretty Bird Fried Chicken Sandwich.

It’s crispy, spicy but not melt-your-face-off spicy, sweet but not toothe-ache sweet, juicy, and fresh. And it’s a real pain to get. Located on Regent Street, Pretty Bird is the size of an average coat closet and seats about seven people at a time. There’s no parking immediately adjacent, and the restaurant is full of sneezing customers from the cloud of paprika in the air. Plus, the combo meal with fries and soda runs you $15.00.

Because getting there is such a to-do, and because it’s the price of most sit-down dinners, the Pretty Bird fried chicken sandwich is a special occasion meal for a childless night out.

So for an everyday, load my kids in the car and go through the drive-thru and pay not a lot chicken sandwich, The Chick-fil-A Spicy Chicken Deluxe with pepper jack is my go-to, and the second chicken sandwich to serve as a standard for what a chicken sandwich should be.d

It’s a chicken breast seasoned with peppers, breaded, fried, and served on a toasted, buttered bun with dill pickle chips, lettuce, tomato and pepper jack cheese.” I crave it every hour of every day. In my experience it is the cure for both the common cold and morning sickness. It’s the perfect fast food meal. I had to take a break in writing this to go get one because I couldn’t stop thinking about how much I wanted one.

So. Each sandwich in this series will be compared to either Pretty Bird or Chick-fil-A depending on the fanciness/fast-foodiness of the meal.

Also, before we get into my judgements, I should tell you that I prefer a spicy chicken sandwich over just a chicken sandwich, which probably impacts my opinion of the four sandwiches that follow.

It’s a chicken breast marinated in “Louisiana seasonings”(whatever that means), battered and breaded then fried, and served with pickles and classic or spicy mayo on a brioche bun.

It’s a gut bomb. It took me a full 24 hours to recover from eating it. I needed a long nap. Every aspect of the sandwich is greasy and none of it feels fresh. The taste is decent but it’s really just the spicy mayo that provides the flavor, unlike the Chick-fil-A sandwich that has actual spicy chicken. And the Chick-fil-A version comes with a fresh tomato and fresh leaf of lettuce, which balances the fattier parts of the sandwich, while the Popeye’s sandwich feels like the entire thing, bun and all, was launched into a vat of oil.

Plus, the Popeyes sandwich is unreliable. It’s anyone’s guess when Popeye’s has them in. I visited Popeyes on three different occasions seeking the sandwich and it was only on the third visit that they had one available.

Next, the Shake Shack Chick'n Shack

It’s a crispy chicken breast served with lettuce, pickles and buttermilk herb mayo. The chicken is the smooth kind of crispy, unlike the craggy kind of crispy of Chick-fil-A chicken. (I don’t believe one kind of crispy is better than the other, it’s nice to have variety).

The Chick’n Shack is not too oily, the lettuce is fresh, and the pickles and herb mayo add a different and delicious dimension. Really, the only reason this chicken sandwich is not perfect is because it’s not spicy.

It's a pretty solid alternative to Pretty Bird. Nordstrom’s crispy chicken sandwich has a chunky, spicy, fried breast served with apple slaw, onion, honey chipotle glaze, and peppercorn aioli on a toasted bun. If the Pretty Bird sandwich is an A+, the Nordstrom Grill sandwich is an A. It’s like comparing Brad Pitt to Chris Hemsworth.

The Nordstrom sandwich is the same price as Pretty Bird before tip, and consuming it is a far more comfortable experience. It’s nice to sit and visit while eating at a leisurely pace instead of wolfing a sandwich as fast as possible while hungry patrons eye your seat in Pretty Bird. Plus Nordstrom’s Kalamata olive fry sauce is the best fry sauce in a state known for fry sauce.

While The Birdhouse Spicy Piri Piri sandwich is roughly the same price as Pretty Bird,

it’s an entirely different beast. It’s a grilled or fried chicken breast served with Piri Piri hot sauce, cabbage slaw, and spicy aioli. I accidentally ordered the grilled breast and that sucked. It tasted too much like...chicken. Chicken should taste like whatever seasoning you put on it, not like actual chicken meat. Chicken meat is a vehicle for seasoning and nothing more.

The Piri Piri sauce on the Birdhouse sandwich is spicy and good, but I feel the same way about that as I do about the Popeye’s aioli: the sauce shouldn’t have to carry a sandwich.