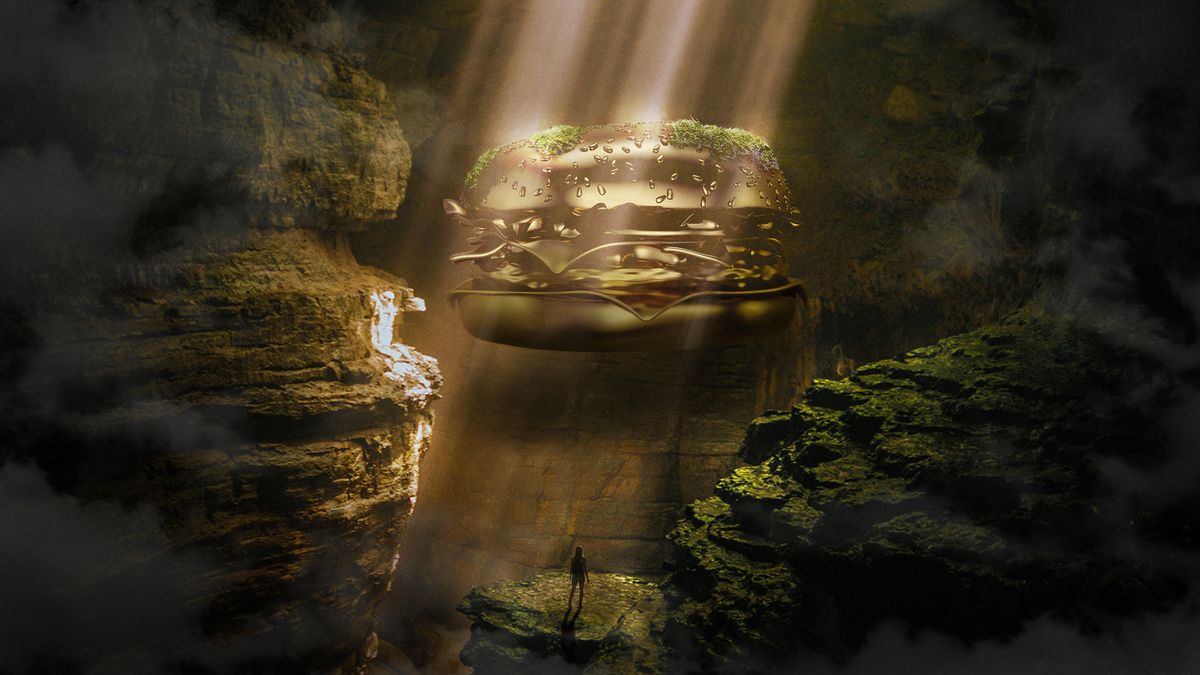 In keeping with my search to find the best of Utah food, I've set out on a new journey. This time my destination is the hamburgers of Utah.

I’m meandering the state, popping into every farm-to-table, neighborhood bistro, and tiny drive-in, and eating all their burgers. I’m reporting on the beauty and uniqueness, or lack thereof, of each bunned patty. Like the Jack Kerouac of beef. I think. I never read On The Road.

I expect this project to take a while. I have a lot of ground (beef) to cover. And so the Burger Diaries will be a series spread out over weeks or months or dare I say, years. This is a work that should not be rushed.

To start this week I will offer my opinions on the burgers at East Liberty Tap House, Lucky 13, Pago, Hires, Stratford Proper, and Crown Burger, all Salt Lake City establishments, all representing a different kind of burger.

I’ve had the Tap House Burger once before and my overwhelming impression was “this has too much ketchup.” So this time I requested no ketchup and that was the correct choice. It’s a good $12 burger. Though it’s not the actual meat that shines here. The meat is fine, but it’s the peppercorn aioli and pickles that sparkle. The Tap House Burger is a burger that’s good thanks to its toppings working overtime.

The fries are delicious. Crispy but not burnt. Salted with good coarse salt. But not served with fry sauce? I spent three years without fry sauce while living in Colorado. It was hell. Every time we ate at Five Guys I had to request a side of mayo to mix with a ketchup packet like some sort of mad condiment scientist and sure, I could have done the same thing at East Liberty Tap House but we are living in the literal birthplace of fry sauce and I should not have to live that struggle. So ten points from Gryffindor.

I ordered the Celestial Burger because that’s what Twitter and the angry GenX waitress who was very annoyed with all my burger-specific questions recommended. I doubted I would like the Celestial Burger because I’m not big on barbecue sauce. But the barbecue sauce does not overpower as barbecue sauce often does. Instead the barbecue sauce, mixed greens, bacon, and cheddar gently compliment a perfect patty. They are the Kelly Rowland and Michelle Williams to the Beyoncé of beef. The meat is savory, tender, and juicy. The flavor is perfect, and I suspect it’s due to high fat content, as so many perfectly flavored things are.

The fries are transcendent. So good that I didn’t even touch the fry sauce served with them. So good that when my friend had to leave our dinner early for an appointment, I took the liberty of eating the rest of her fries off her plate. So good that I wasn’t even a little self conscious about eating probably seventy fries.

The first red flag waved when the waiter asked how I wanted my burger cooked. When I told him medium, for half a second his eyes flashed with terror. Like he’d seen the horrors of medium too many times before. So I told him I’d go with medium well, which in my mind is one step from meat with no pink at all. When the burger arrived and I took my first bite, I was alarmed to find bright magenta flesh just beneath the seared patty exterior. I was transported back to a time when, hours after eating an undercooked burger, I bolted upright in bed and made a dash to the bathroom. I only barely reached the toilet before vomiting. I spent the next 24 hours on the bathroom floor wishing death would just take me already between violent gastrointestinal episodes. Had I known how rare Pago’s version of medium well would be, I would have ordered the burger well done lest history repeat itself. I was spared any stomach distress this time, but still spooked. There's too much potential for contamination in patty preparation to play fast and loose with temperatures.

Also, given the long list of toppings – bacon, white cheddar, pickled onion, and black garlic aioli – I was surprised by how one-note I found the taste. The cheddar overpowered every other component, and the whole thing tasted like dairy? If that makes sense? Like, overwhelmingly lactosey. Between the raw meat and the milky taste the whole thing felt like eating a living cow. I was tired of it halfway through the burger and didn’t even finish. That’s maybe the third time in the history of my life I haven’t finished a meal. The first two were during those 24 hours spent on the bathroom floor.

The truffle frites, however, were excellent, even though they are eye-rollingly called frites instead of fries, which is what they actually are. It’s like that old British sitcom Keeping Up Appearances featuring the character Hyacinth Bucket who insists her last name is pronounced "Bouquet."

The Big H is a bit of a misnomer. It is not big, but a normal sized cheeseburger with a thin patty and American cheese served with fry sauce, tomato, lettuce, and the infamous flour-sprinkled bun.

I do not know if the Big H is good. I’m too emotionally involved to make an objective call. When I was a child living in Provo, every pilgrimage to Salt Lake included a visit to Hires for a Big H and root beer float. So to me the burger doesn't have so much a taste as a comforting feeling. It's a memory burger.

Hires is a landmark and we all go there because it's where you go when you're in Salt Lake. Which could explain why I’ve seen every prominent Utah politician there at separate times. I once spent an entire lunch trying to discreetly film Orrin Hatch eating with his staffers. His security detail was not amused. John Huntsman sat at the table next to me another time. And Mitt Romney made a campaign stop during a different lunch. I'm more sure you'll see a famous republican at Hires than I am that you'll like the food. Because again, I'm not sure if the food is good or if it's a habit.

I can tell you that sometimes the fries are good, and sometimes they are not. It really depends which of the four employees, all of whom have been there for years, is manning the fryer. Your fries could be crispy and scrumptious or soggy and sad. So I don’t order the fries. Instead I order the onion rings, which I do actually know are good all the time.

And the beverages are top shelf. The root beer comes in a frosty mug. Flavor shots for soda are free of charge. The shakes are made with fresh berries. So even if you don't like the burger, you'll like what you wash it down with.

Eating the Bistro Burger at Stratford Proper is the closest I’ve come to crying over food.

When I tried the Bistro Burger I was having one of those days. I was stressed and I hadn't had much of a lunch. I had passed hangry and become hangpressed. Biting into this burger brought instantaneous joy and satisfaction and my problems melted away as my eyes welled with tears.

Even if I hadn’t been on the verge of a meltdown due to lack of snacks in my house (no one’s fault but my own), this would still number among the best burgers of my life.

The burger comes with caramelized onions, arugula, garlic aioli, and brie or white cheddar. I chose white cheddar at our waitress’s suggestion and it worked for me in a big way. The patty is good sized but not can’t-fit-in-your-mouth big. The garlic aioli that doubles as fry dipping sauce has a nice ranch vibe, but the good ranch packets vibe, not the pre-mixed gloopy bottled ranch with a weird aftertaste vibe. And the arugula adds just enough zest.

The fries are thick, as fries should be, and well-salted. And I found the garlic aioli a refreshing change of pace as a dip.

Stratford Proper is a few blocks from our house, so me and various iterations of mine are there often. The food is always good, but I usually have a few notes. Not with the Bistro Burger. It’s a perfect meal.

Go now while the weather permits patio dining. And call me when you do. I’ll walk down and meet you.

It’s... a lot of pastrami. And maybe I don’t like pastrami. I think pastrami is just spicy bologna? This is a giant deli meat conspiracy likely perpetuated by Oscar Meyer and Big Bologna. The deep state drives the weinermobile and the Crown Burger is a spicy bologna sandwich with a hamburger patty. EDITOR'S NOTE: a source (my spouse) tells me that the Crown Burger should be ordered as a double. He claims that two patties makes for a better beef-pastrami ratio. But if that's true, the Crown Burger should come standard with two patties or half the pastrami.

Once I picked off all the pastrami I enjoyed my cheeseburger. The cheeseburger is always good. Just get the cheeseburger. And the fries. The fries are also always good. Or get the gyro. I know this isn't the Gyro Diaries, but the gyro is very good and there are no real rules here at The Beehive and recommending a gyro in a story about burgers is actually very on brand for this publication.