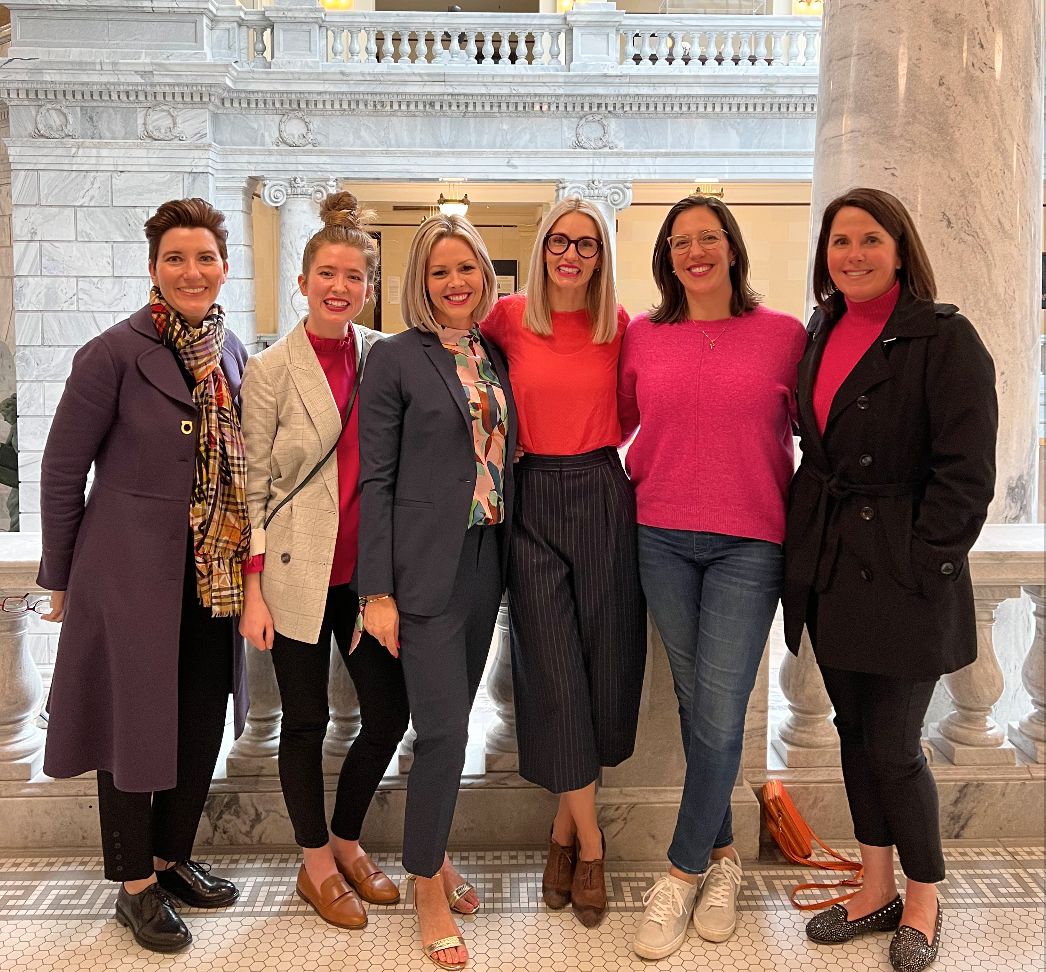 The first thing I noticed about the room—the visual that sank in and made itself at home—wasn’t the large u-shaped desk at the front, or the senate committee members milling near the back. No, what I noticed first was that it was filled with women: middle school girls sitting shyly in the front row, twenty- and thirty-somethings in smart pantsuits chatting excitedly together, an aunt with her niece, mothers and daughters, middle aged women, one with a stream of white hair flowing down her back.

Every one of them was in the East Senate building that February afternoon to voice their support for HB162, a bill created by women for women that aims to put free period products in every women’s and all-gender restroom in every public and charter K-12 school in the state.

I was an observer at the senate education committee hearing, but I still sat at the edge of my seat, invested. HB162 is a special bill. Not only has it had unanimous bipartisan support in the Utah legislature and been enormously popular on the Hill, but when implemented, it will be a major stepping stone in improving the educational experience for thousands of girls throughout the state. It aims to take on period poverty, and it’s busting down other barriers in the process.

You get a sense of how important and exciting this bill is when you talk to the women behind it—women like Brooke Wood, Director of Programs and legal for The Policy Project and a third-year law student at BYU.

“Right now is this really unique time in history where the stigma and shame that has existed around talking about periods is really starting to break down, and so this is kind of the first time in our history where people have felt comfortable discussing this in public places,” Brooke told me over the phone.

The Policy Project, a nonprofit, non-partisan organization founded and led by women, is the moving force behind the bill and has been working since 2019 to make period products more accessible to individuals who menstruate. Brooke referred to them as a “strike team.” It’s a good descriptor. Throughout the hearing process, The Policy Project team can be seen sitting in the front row of the galleries, adorned in pinks and reds, sometimes wearing pink lipstick. Their goal is to bring bathrooms to the 21st century, providing menstrual products with as much ease of access as toilet paper.

Sponsored by Rep. Karianne Lisonbee, R-Clearfield, HB162 is a public-private facing bill. Through the proposal for HB162, the state would supply public and charter schools with an estimated $1 to $2 million dollars worth of tampons and pads each year. Additionally, the Andrus Family Foundation and the Larry H Miller & Gail Miller Family Foundation have pledged to donate $1 million to cover the cost of the dispensers for the products. Brooke told me both were very eager to get involved.

“The support for helping to end period poverty was kind of built in because it’s so widely experienced, but has just been a silent need for so long,” Brooke said. “The people who haven’t been aware of it, as soon as they hear, they’re just in shock, because it’s just something that we haven’t talked about and everybody just assumes it’s taken care of.”

Period poverty (or lack of access to menstruation products) is a reality for women across the globe, and it’s an especially pressing issue for children. Young girls typically start their periods at age 12, but for 10-15 percent of girls, puberty begins at age seven. Children experiencing difficult living conditions, particularly those associated with poverty, stress, and race, are beginning their periods at much younger ages.

Because almost all school-age girls begin their periods before they’re legally able to work or have any control over family finances, they are at highest risk for mismanaged or under-managed menstruation.

While other issues can be very complex and take decades to address effectively, Brooke said period poverty is something that can be solved in ten years. It’s part of the reason why the campaign for period products in schools has been so popular in the community, she says, particularly among the young girls that The Policy Project has involved during the legislative session through grassroots civic engagement campaigns.

“What will be so amazing is if this bill passes, there’s hundreds of girls throughout the state of Utah who have written their legislators asking them to pass this bill, who have talked about it with their fellow students and with their administrators, and then next school year the period products will be in the schools,” Brooke said.

She shared one letter with me that was written by a custodian at Hill Crest Jr. High School who’s worked there for 26 years.

“In those 26 years, I have cleaned small pools of blood on a student’s chair or dr[ied] streaks of blood. I’ve had to find old lost and found jackets or old towels, just something to cover their backside so no one could see the blood on their pants,” she writes. “I’ve had girls sneak up to me and whisper they needed a tampon or a pad...I have seen many girls embarrassed and crying because they were on their period and their clothes were stained. I have seen girls in tears because they put money in the tampon/pad vending machine and the machine was empty and they had no more money.”

It’s hard to read a letter like that without being taken back to those vulnerable junior high days of being surprised by your period in class, of having to stuff thin toilet paper in your underwear because you’re unprepared. If you can afford period products, you may have one or two days like that a month. That isn’t a reality for the young women this bill will help most, who, lacking the resources, stay home and miss assignments and other classwork.

“There’s just so much energy spent on this issue for young girls, and I think this bill will really give them the peace of mind, the ability to be in class and be present and succeed,” Brooke said.

Back in the hearing, woman after woman (a couple of men, too) testified in favor of the bill, students, school district members, and Policy Project board members alike. One student from Roots Charter High School said having period products in her school will help girls feel like they are not alone. Another added that this bill will help girls feel more comfortable and be able to focus. Rosie Peralta, a volunteer in the Glendale area, shared her experience of being laughed at by other students at school after her period started and she didn’t have any products, adding that thirty years later things still haven’t changed. When she heard about the bill, she said she wanted to cry.

“This is such an extreme need that has just been overlooked,” said Emily Bell McCormick, the founder and president of The Policy Project. “We’re really excited, because this will lift girls in every single demographic. We know that this will make a huge difference.”

There was a moment of strangeness for me sitting in that room of women who talked so openly about something that, for most of my life, has only been talked about privately. It was unfamiliar, but empowering. Many of women’s issues have gone unaddressed, barely thought of, let alone spoken of, on floors like this where male voices are historically predominant, but this bill and what will come after it are shifting the conversation, telling young girls as well as grown women that their experiences matter.

“I think what’s most impactful to me is the message that this is going to send to girls in school,” Brooke told me in our conversation before the hearing. “I really feel like it’s going to say, ‘We want you here’...we want you here and we’re willing to invest in you staying here.”

On Thursday, February 10th, HB162 passed 24-0 through its second reading on the senate floor. It will now go on to its third reading where the senate will vote on its funding.

To learn more about The Policy Project and HB162, check out utahperiodproject.org.