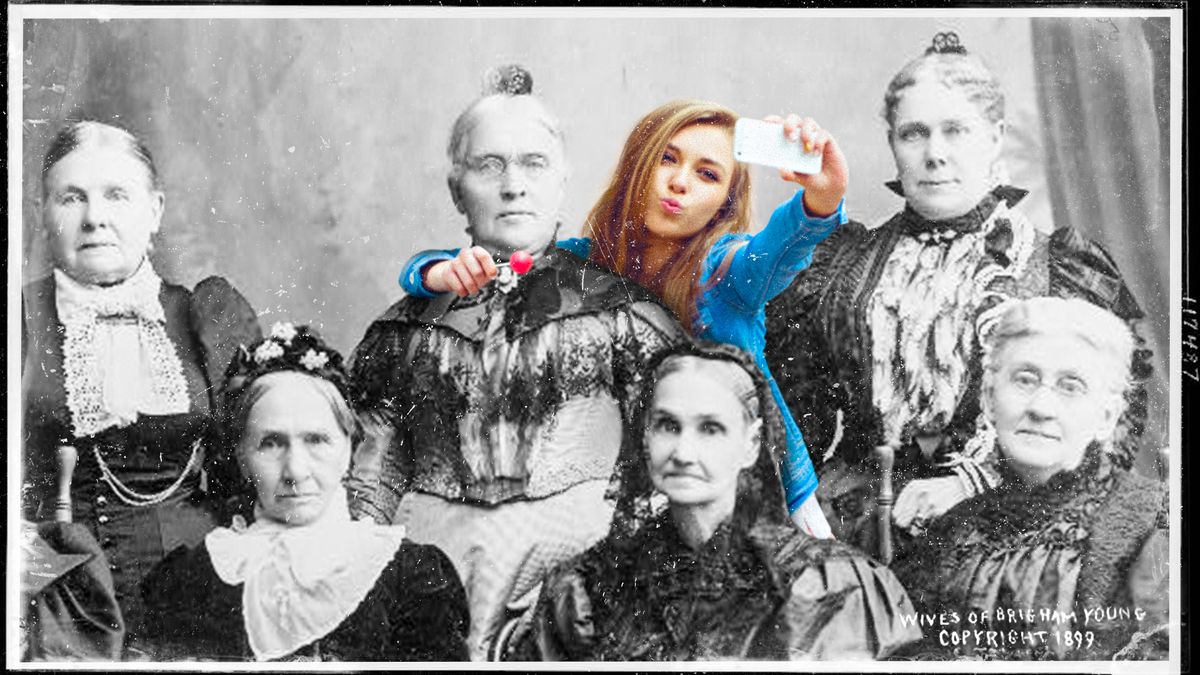 The Love/Hate State: An Essay About Polygamy

I moved back to Utah last summer, after eight years away. I came back kicking and screaming and it’s been downright lovely since.*

(*Aside from the horrible terrible soul crushing nothingness of life in the time of Covid-19. I’m compartmentalizing here and hope you understand.)

Utah for me is a place where love and hate are neighbors. Take, for example, the fact there is *one* freeway, littered with billboards where Domo bro inside jokes pass for headlines, and yet all up and down this single freeway are the most jaw-dropping, beautiful canyons just sitting there! Yours for the Instagramming!

There are glorious summers and bitter cold winters. Low gas prices but also the inversion. It is a state full of the world’s best people who also elected Mike Lee?

Love and hate. On repeat.

The thing I love/hate most about Utah is how connected it is. The tight-knit community that exists in this state is both what drove me to flee and why I couldn’t stay away.

I grew up in Provo, in a nice house on the bench with a view of Utah Lake. I was the youngest of five children and one of 46 cousins who all lived within an hour of each other. Family was everything, and everywhere.

Someone was always having surgery done by my uncle or playing sports with my cousin. Some friend or another was forever asking if I had a crush on Dave Jackson, despite me repeatedly reminding them WE ARE COUSINS. And cousins are friends, okay? Please don’t make this gross.

My life was basically Parenthood, but the idyllic family closeness went wholly unappreciated by my teenage self, who longed more than anything to just live in a place where I knew no one.

Yes, what I wanted more than anything in the world was to just be lonely for once. It became a years-long quest, and I saw it realized a month after graduating from BYU when I moved out of state.

It’s hard to express the joy I felt the first time I ran errands with wet hair and no makeup. It delighted me to no end to drive around and have no idea what any of the restaurants were, whether they were good, or whose family owned them. I was intoxicated by the independence that I felt could only come by living in a place where I was alone.

Any time a new acquaintance found out I was from Utah, the immediate response was a bemused look and some variation of, “So how many moms do you have?”

You think I’m joking. Okay maybe I am joking, but only barely! If I had to stop joking, I would still tell you this comment came up 70% of the time.

I have always been uncomfortable with the fact that I am spawn of polygamy, and to be defined by it when I was out making my grand entrance into the world made me quickly come to resent my home state.

Someone would ask where I went to school, and I had to say BYU, and they’d ask about polygamy.

Someone would ask where I was from in a job interview, I would tell them, and they would lower their voice and ask, "Do you wear the underwear?"

Even my 801 number ratted me out. During a year I worked as a creative recruiter, most of my (supposed-to-be professional) phone calls to candidates began with a ten-minute discussion about whether I was part of that cult.

The stench of my home state clung to me like the smell of Utah Lake, and it made me furious. Why couldn’t Utah just let me grow up? Why couldn’t it let go of me the way I was so ready to let go of it?

Strangely, I got the beginnings of an answer when I read a book about polygamy.

This was only a few years back, mind you. It took a solid 30 years for me to confront the reality of my polygamous ancestors, which I did with Laurel Thatcher Ulrich’s impressive book A House Full of Females. I read it with another friend from Utah, an act of solidarity in a book club of two.

The book is put together using the journals of several people involved in polygamy. At times it read like an issue of Cosmo because how could it not? A House Full of Females could be another name for The Bachelor. There was drama and strife but underneath it all was the sacred mundane that is the focus of all Laurel’s work. I kept thinking how relieved I was that this was no longer a part of my religion, while not being able to suppress the reality that so much of what she described felt familiar.

The picture she paints of strong communities and proud domesticity reminded me of the neighborhood I grew up in. While the women on my cul de sac did not share a husband, they did share recipes, babysitters, boats, and back yards with an ease that felt as though we were family. They shared the responsibility of teaching Sunday School lessons, of bringing us into their homes for church activities. My upbringing was the collective effort of a dozen women. Not a house, but a neighborhood full of females.

Again, I cannot overstate my relief that polygamy is long over for my family, and I know it’s increasingly inaccurate to make Utah synonymous with Mormonism. But polygamy was this state’s demographic blueprint. It kick-started this population in a way that, I think, made it uniquely and forever connected.

Polygamy is why my extended family reunions are held at convention centers. It’s why one of BYU’s party games is for everyone to pull out their Ancestry.com app and see who in the room they’re related to. It’s why I wish Ancestry.com had been a thing when I was in college so I could have avoided dating my cousin (Okay, he was a distant cousin. BUT STILL).

The connectedness I wanted so desperately to escape is also what eventually pulled me back to Utah. There are smart people here starting interesting things. There are jobs, and people who know people, and it turns out it can be easier to find work when you have a network than when you’re alone.

Since moving back, it seems Utah’s world has only gotten smaller. I’ll try a High Fitness class and see an old college roommate who married a guy from high school and they all work with my cousin at Qualtrics.

There are hate moments, like when I ran into my prom date at the awkward phase of pregnancy where it might just be a Cafe Rio burrito in there. Or when I go to the grocery store and women have curled their hair and I feel bad for not looking better.

But there are also love moments, where I see an old neighbor outside a restaurant and we squeal at the sight of each other. Or where I run into my cousin Dave Jackson and get to finally meet his wife!

I hate explaining polygamy, but my world can’t be explained without it. It is the best and worst thing about Utah. My home, my love/hate state.