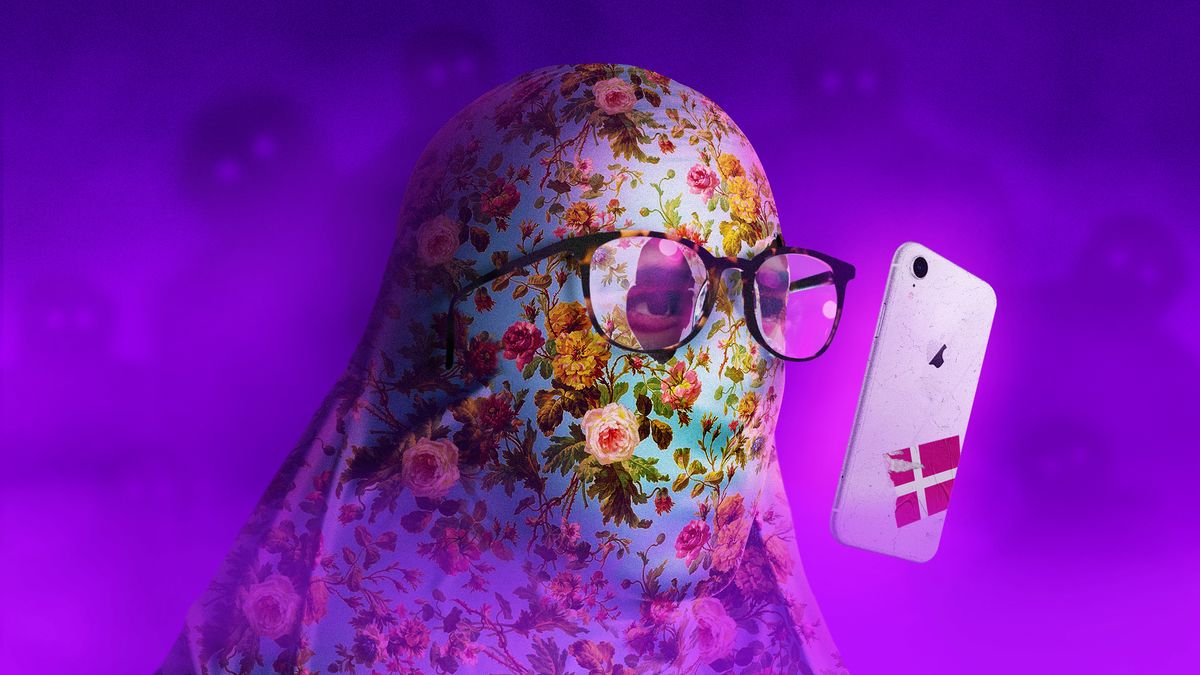 When I first met my husband in 2015, he was living in another state. We did the long distance thing for a while, occasionally traveling back and forth to see one another. To get the most bang for our travel and time buck, we tried to plan and cram as many events as we possibly could into the weekends that seemed to fly by too quickly.

The first time Skylar came to visit Salt Lake City was especially stressful for me. It was unlikely I would be able to move any time soon due to my career, so if this relationship was going to go anywhere, I needed him to fall in love with my majestic mountains and Cafe Rio.

The first thing was a euphemism, and frankly, so was the second.

He would be visiting the third weekend in October, so I compiled a small list of fall festivities and I called him to gauge his interest in several possibilities.

“We have a very popular haunted house in downtown Salt Lake City,” I told him. “What do you think of haunted houses?”

This was a video call so I could see Skylar’s facial expressions as he sat in his office somewhere in Wisconsin.

“I mean . . . I guess they’re fine,” he told me. And then he looked directly into the camera with a slight smirk like he was nine and trying to get an adult to confirm the Santa hoax. “But, like, I don’t believe they’re actually haunted.”

I laughed. “NO ONE THINKS THIS WAREHOUSE WHERE PEOPLE DRESS UP AS GHOSTS AND SERIAL KILLERS IS ACTUALLY HAUNTED, SKYLAR.”

This has become one of my favorite stories at dinner parties over the years. Skylar playfully protests my characterizations. “I meant that it’s hard for me to get into it mentally because I know these people running around in costumes are just a bunch of teenagers who have biology class in the morning,” he’ll say as I shush him and assure our probably bored audience that “he totally wanted reassurance that ghosts aren’t real.”

Then we’ll drive home and he’ll roll his eyes at it all. “It’s hilarious that story makes it look like I’m the one who believes in ghosts,” he’ll say, implying exactly what you think he’s implying.

“You know, it’s probably not a good idea to say stuff like that when they can hear you.” I whisper the last part to really drive it home.

Because, reader, my husband is wrong. Ghosts are real, they live among us, and this has been our greatest source of marital consternation.

“How can you possibly think ghosts are real?” he’ll say.

“Prove to me they’re not!” I demand to sighs of forfeit.

I win that argument every time, but to what end? I’m still married to a man who refuses to acknowledge that in fifth grade, Melanie Jones’s mom totally saw the silhouette of a nurse who was rumored to have jumped out of the window down the hall of the hospital where Melanie’s mom had a hysterectomy in 1994. Would Melanie’s mom have just made that up? Of course not. She saw a ghost and my husband is a faithless anti-ghoster.

I’ve tried to scare him straight on this. Oh, believe me, I’ve tried! I’ve shared with him every third- or fourth-hand ghost story I’ve ever heard, exaggerating most of the details because that’s what you have to do to keep the attention of these kinds of people.

He responds to each story the same way. With an eye roll and a comment about how if he ever divorces me a judge will totally give him custody of the kids we don’t even have yet.

“Fine. But try to dispute this one!” I told him one day. Then I waved my hand slowly in the air as I whispered, “The Story Of The Mink Creek Ghost.”

My grandma used to tell us this one when we were too young to hear it.

“It all started when a family moved into The Old Hill Farmhouse in 1938,” she’d say, summoning her most solemn voice, usually reserved for tragic gossip. The last time she told me this story was in the back of a taxi in northern Israel at 2:00 in the morning in 2008. She held onto my arm as we bounced down a bad and dark road, nearly whispering “I was a little girl and it was so long ago, but I remember eavesdropping on my father in the next room like it was yesterday. He was talking with other farmers in the town late into the night about what to do with this evil presence that ambushed our town like a rushing wind.”

The story went, as I recall (and I fully acknowledge that I may not recall this correctly, as my 90-year-old grandma will surely tell me when she reads this): grandma was a little girl living with her father and older brothers in a town called Mink Creek in the hills of southern Idaho. Mink Creek is nestled in a small canyon between two green mountains, with old white-painted houses spaced acres apart facing one another amid endless rows of alfalfa and wheat.

Grandma’s family had emigrated from Switzerland, and they liked Mink Creek because it looked like home.

Across the mountain from where grandma lived sat The Old Hill Farmhouse, which was owned and occupied by an elderly Danish couple until, one day, they decided to move back to Denmark to live out their final act. Relatives of the Danish couple, a young family with a girl around grandma’s age, who I assume wore bows in her hair and looked like Anastasia Romanov, bought The Old Hill Farmhouse.

The man who bought the house, the little girl’s father, offered to drive the Danish couple to Salt Lake City to catch a train and begin their journey home. The people of Mink Creek stood on the sides of the town road, waving goodbye to these longtime residents as they rode away in the back of an old Model T with all their worldly possessions.

The sendoff reportedly went without a hitch, but once the girl’s father returned to quiet Mink Creek, straaaaaange things began to happen. His daughter, aged I don’t know like 9 or 11 or 14—it doesn’t matter, began screaming every night, crying out for her parents because she swore she saw the dark shadow of a tall, evil man in her bedroom.

The visitations began to occur nightly. The screams of the girl echoed across the hills of this usually peaceful town. Eventually The Dark Shadowed Man began strangling the young victim, who was very pretty and that shouldn’t matter but people are terrible and for some reason it usually does matter in stories like this. My grandma saw bruises on the girl’s neck at the schoolhouse—yes, she called it “the schoolhouse”—on several occasions.

“It was The Dark Shadowed Man,” the girl would whisper.

The town was in a fright. Local clergymen regularly visited the home to bless it or exorcise it or remodel it like on HGTV or I don’t know. They did stuff to try to stop the haunting.

The harder they tried, the more aggressive The Dark. Shadowed. Man. Became.

Finally in a fury and in the middle of the night, the family packed up all their belongings in a Grapes of Wrath-style caravan and fled the town, never to be heard from again.

A new family moved into The Old Hill Farmhouse, one unrelated to any of the prior occupants. The town waited with baited breath, but this new family found the home to be peaceful. The evil presence seemed to have moved on. The ordeal was nearly forgotten.

Not five years later, an investigation turned up evidence of two bodies buried in the desert somewhere between Mink Creek and Salt Lake City. A handful of personal belongings, bags and wallets entirely emptied of cash or anything of monetary value, had been discarded nearby. The bodies belonged to the Danish couple. You know, the one from such hits as the beginning of this very story.

The perpetrator of this vile double homicide:

THE FATHER OF THE HAUNTED FAMILY.

I yelled that last line when I told it to my husband’s back as he was walking into the kitchen to pour himself another glass of wine.

“Did you hear me?!” I shouted in exasperation. “THE FATHER OF THE HAUNTED FAMILY.”

“Yeah. I caught that part,” he responded, staring at a phone app that isn’t even that addictive.

“The Dark Shadowed Man was obviously some spirit seeking vengeance for the murder of the Danish couple!” I over-explained, since he obviously didn’t understand the significance of the punchline. He wasn’t even responding anymore, like I was Bruce Willis in The Sixth Sense and he was the wife who was moving on.

I brought the story up several times to him after that, usually by “remembering” new details I forgot to tell him previously.

“Did I mention people in the town visited the house and they found men’s footprints that didn’t fit the shoe size of anyone in the family???”

“No. I guess you didn’t,” a distracted prosaic husband barely responded.

“Well the footprints only ENTERED the room. There were no footprints EXITING!” I shouted, like a television evangelist who desperately needed to con someone into giving them money.

It never made a difference. The new facts. The skilled storytelling. The earnestness in my voice. He never believed a word of it.

I wasn’t so upset that he was skeptical of this story in particular. I knew my grandma had made it up to scare us when we were children. The story was too good. Too on the nose. Too exciting.

But I had hoped he might be intrigued enough to at least entertain the idea of legitimate ghosting.

I thought that maybe, even if this one didn’t do the trick, the right one might. Maybe if I just found a story documented by something more reliable than “my grandma once told me,” he would catch the spirit.

And so, last year I googled “real ghost stories” in a sincere effort to research some documented accounts.

One of the top results caught my eye.

“Ghost Story” the title of a Deseret News article from 2005 read.

“In the little town of Mink Creek, residents tell the story of a ghost that arrived in a rushing wind at a farmhouse in the canyon, attacking a young girl and nearly choking her. This occurred repeatedly over a period of time, and no effort of the residents was able to rout the spirit. Some said the ghost was the avenging spirit of a wealthy Danish relative who had been killed by the girl’s father. Eventually, however, the young girl died, the family left the area, and the ghost was never seen or heard again.”

That night I shivered as I climbed into bed, grabbing my husband’s arm and forcing him to wrap it around my body.

“Ghosts are definitely not real, right?” I begged him through whispers.

“No, honey.” he comforted me. “They’re as fake as alien encounters.”

I tensed up, paused for a moment, and then responded matter of factly, “Speaking of aliens, have I ever told you about the South Jordan Sighting when I was eight?”

The Bachelorette: We Never Said It Would Be Easy