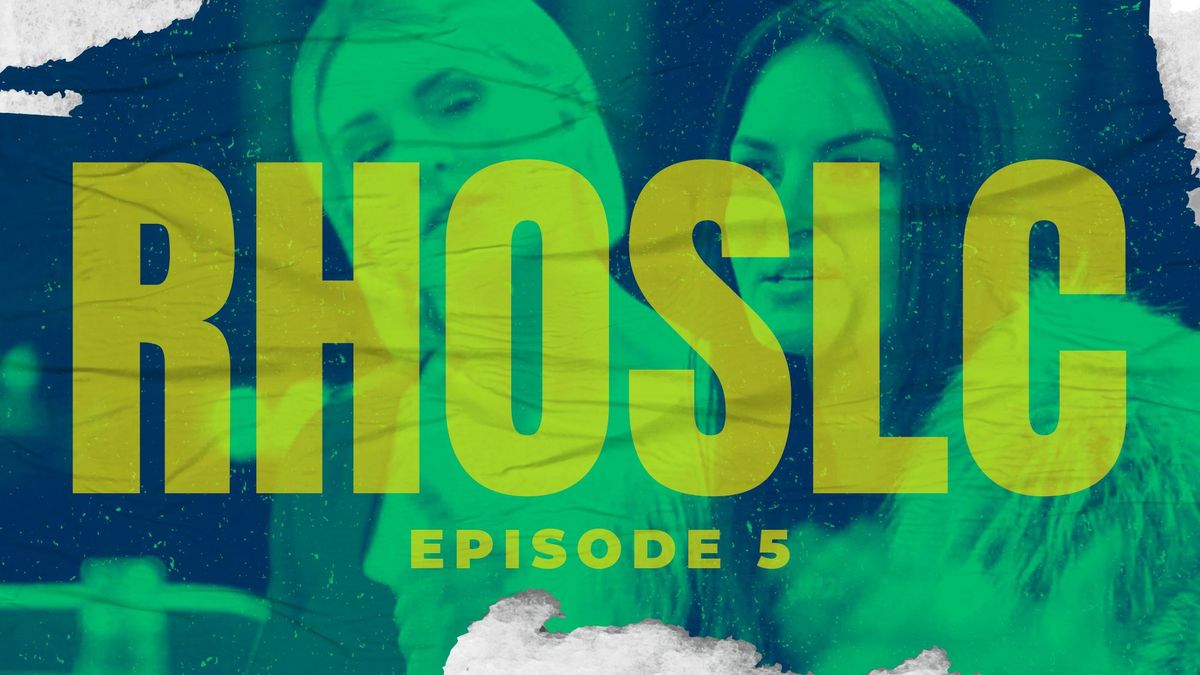 At the top of episode 5 we’re still at Valter’s, and Mary’s still mad that she didn’t get an apology from Jen.

While Valter prepares the infamous honey lemon ice cream that so many of you mentioned in defense of Valter’s after I threw shade at the restaurant last week,

Jen tries to explain why she is the way she is. She says she yells because she cares. But Mary doesn’t accept Jen’s explanation. Instead she tells Jen not to get ghetto.

Things escalate pretty quickly from there, and the other housewives sit and watch in horror as an argument rife with racial tension plays out between the two women of color in the group, none of them really understanding what’s happening or how to intervene.

At one point, Mary asks Jen to leave, so Heather follows Jen out and also catches us up on why the two women are at odds.

Heather convinces Jen to come back inside, and the other women steel themselves for more flare-ups.

Things get crazy again as soon as Jen sits back down. As the other housewives start to come to Jen's defense, Mary says they need to calm down. For Valter’s sake.

Valter has done nothing to indicate that he is very upset right now other than stand in a corner with a little bit of RBF. But Mary's tactic works for a hot second,

Until Jen shoots back that she also knows Valter AND Arturo.

Gotta tell ya, knowing Valter is not the flex these women think it is. Everyone knows Valter. Valter has a gallery of photos in the Valter’s entry way with each living human who has dined in his restaurant. He’s the friendliest person in the state.

Whitney tries to add to the conversation, but Mary shuts her down, too.

Heather tries to jump in and Mary calls her two-faced.

Lisa, again, makes a situation that has nothing to do with her all about her.

Then Mary calls Jen a hoodlum.

This understandably upsets Jen, so Jen shares that Mary once told her that if she sees black people standing outside a 7-11, she’ll go to a different 7-11.

In her ITM, Mary explains or tries to explain that this is because she has a fear of two places: Hospitals and convenience stores.

Eventually Jen has had enough and leaves.

The next day Mary seems to have recovered from the tumultuous lunch, and is beatboxing with her housekeeper Charlinda who seems to be required to wear a hairnet at all times:

Up in their Park City home, Brooks in his Brooksian way of not caring but caring asks Meredith about the luncheon and whether or not Jen apologized to Meredith for yelling at her,

And he immediately sees right through Meredith’s attempt to give Jen a pass.

We all need Brooks in our lives .

Over in Midvale, Heather and her daughters await the arrival of her eldest daughter Ashley’s boyfriend who drives what appears to be a souped-up Ford:

I mean, the no two dances with the same boy wasn’t a rule in my house, but I believe Heather if she says it was a rule in hers. Also, it maybe wasn't a rule in my house because most of my dates in high school were with men who have since come out so my parents were never really worried.

Boyfriend Jadyn/Jadon/Jaden/Jayden is the quintessential high school boyfriend that we all had at one time or another with floppy hair, dreamy eyes, and a stupid car.

Heather tells her daughters and Jeighden that because she’ll be out late that night, she probably won’t be going to church the next morning. My surprise that Heather was still attending church aside, I really appreciate the ensuing conversation she has with her daughters.

She tells her girls that they can go to church without her, but the girls have some hesitations.

Heather explains that since the divorce, it’s felt more difficult for her family to fit in at church. The girls add that they feel judged, especially when returning after a long absence.

In response, Heather offers some wisdom:

We could all do better to remember that our worship and church activity or lack thereof is no one's business but our own.

A little further north, Meredith is retrieving Seth from the airport.

The couple last all of ten seconds being kind and loving to each other before arguing over whether or not Meredith should relocate to Ohio.

It’s a real bummer and there’s not much to say other than these two seem to be heading for rock bottom at some sort of land speed record. In my opinion, if anyone cares, Seth isn't being totally fair. Meredith is on the freaking Real Housewives Of Salt Lake City and he wants her to leave the show and move to Ohio?

Over on the east side we we get a glimpse inside Mary’s closet,

Robert Senior pages the housekeeper to bring Mary her tray

And Charlinda brings a tray full of food to Mary from somewhere that’s not the kitchen?

Mary and Robert sit in the kitchen and rehash the beef Mary has with Jen.

Then Mary tells Robert what I think she tells herself in the mirror each morning:

Mary seems to think the issue we all have with her marriage to Robert is some sort of genetic thing, when in fact our concern lies in the fact that she was forced at the age of 22, and against her wishes, to marry a man who maybe had her grandmother killed.

Robert assures Mary that Jen is only jealous.

Jen, too, chats with her spouse about the altercation.

She gets emotional thinking about her black sons and nephews, and the possibility that Mary might fear them if she saw them standing outside a 7-11.

Sharrieff tells Jen that she shouldn’t give Mary the satisfaction of an overblown reaction.

I'm wondering if Sharrieff is taking on new clients? The dude's a very skilled therapist.

and talk about her dad, who is headed back to rehab. I really hope Whitney's dad gets well. I do. I feel bad for him and anyone suffering from an addiction. I just really don't care about this story line. The only thing worth mentioning from this scene is Whitney’s insane ITM look:

Down in Draper, Lisa is feeling some mom guilt about the upcoming Sundance Festival, which she claims she runs (?) and takes a lot of time and attention, so she goes big on a party for her eight year old.

And tbh, I can relate. 2020 has got me feeling like a real crappy parent so I have a Christmas closet full of stuff my kids don't need and am hoping a bunch of legos will make up for all the times I snapped at them this year for breathing too loud or whatever.

Lisa uses the occasion, a child’s birthday party in a bowling alley, to talk with John about the deterioration of Meredith’s marriage by comparing it to their marriage.

After the weird Rolex anecdote that somehow proves their marriage is strong, Lisa explains Mormons believe marriage is for eternity and that it’s about picking a partner and making it work through imperfection. It’s a pretty healthy view of marriage, IMO, and a refreshing perspective from a woman who up to this point has been hesitant to show us anything other than perfection.

Then, unfortunately, it’s back to Seth and Meredith. Seth tells Meredith it’s time for him to get back to Ohio. And Meredith tells him he should maybe stay there for a while.

So Seth tells her he’ll give her the time she needs.

Then Seth starts to cry and tells Meredith he doesn’t want to separate after twenty five years of marriage.

Meredith embraces Seth and together they cry.

It is devastating and I’m genuinely moved, but taken right out of it when the camera pans wide and we spot the Mar Gallery art on the wall:

Never thought that Meredith would walk out of that gallery with a portrait of Paddington's anarchist phase.

Then we meet up with Heather and Mary at my favorite Salt Lake City restaurant:

The women sit at a table I’ve sat at many times before and order still water because:

Heather asks Mary about the luncheon

And a black woman.

Then Mary mentions, again, that Jen called her a “grandpa mfer,” which is not accurate.  Heather understands that this makes Mary feel threatened about her marriage, and says as much.

Mary agrees and explains the marriage arrangement to Heather,

Mary has told us this same story every episode for five episodes straight, and yet it is still the most shocking story every time I hear it. I still have no idea how to process this information.

And I don't think Mary does either. Because she gets real with Heather and admits she never wanted to marry Robert Senior:

Mary says it took her two years to talk herself into marrying Robert. She fails to mention that she had to divorce her first husband in the process.

Then she says that after a lot of praying, “God” finally told her to marry him.

Then Mary claims that she knows she made the right choice because now she can afford designer clothes:

Heather tries her darndest to empathize with Mary

And with that, we’ll have to wait until next week to see if Jen and Mary can rebuild the bridge they’ve both torched.

Until then, check out our audio recaps of the RHOSLC episodes on The Green Room, and subscribe to our newsletter to get these recaps and other Hive Mind content in your inbox weekly.