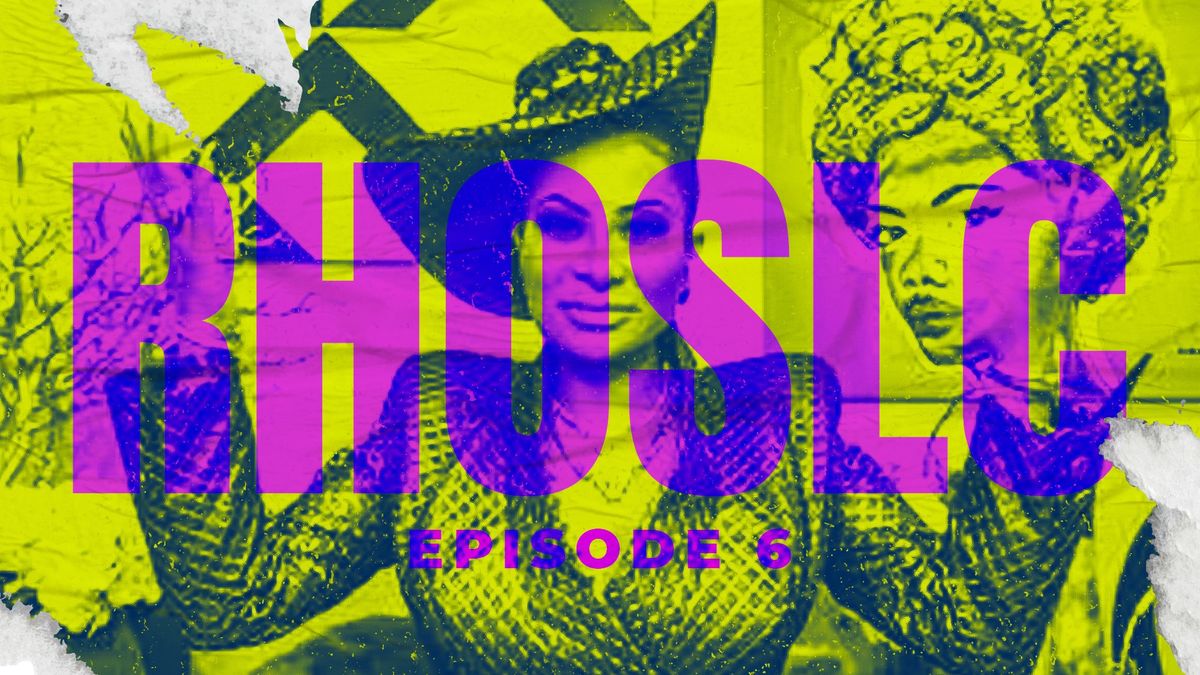 Episode 6 titled "Sundance City" is all about the Sundance Film Festival.

I feel compelled to offer a local's perspective on the festival in order to add some context to the universe in which these housewives operate. Most of us are barely aware of when and where the festival is happening. We may go to a screening or two. We may drive to Park City and try and spot celebrities if we're really bored. But it's not for us. It's for out-of-towners who show up in ridiculous winter clothing and stay at our high-end resorts and spend a lot of time getting wasted at our bars and in that way, it's emblematic of this show's cast.

to the long suffering John, who nods in support.

Heather has discovered one of her three daughters has failed to rinse their dishes properly and there is now loose oatmeal floating around in the dishwasher.

She kicks the machine closed and decides to run it again and honestly, I feel this move on a spiritual level.

that she plans to wear on the runway for Park City fashion week, which is very much not a thing.

But these two women are trying to make it a thing:

and in doing so, have invited Brooks to show a collection.

Then we catch up with Jen, wearing a tiara, rollerskating around her office:

She switches to hula-hooping

for a one-on-one with Stu, who fans her while running through the Sundance calendar.

To thank him, Jen reminds Stu of a time I’m sure he’d rather forget:

Then it’s back to Lisa, who is busy running around Park City, arranging the final details for a number of events.

“Some people call me the queen of Sundance. I think I’m just really good at what I do,” Lisa says, explaining that what she does is run a marketing company. And here I thought she was just the hype woman for her tequila.

Stu drops off Jen at Whitney’s house and then leaves?

and Jen emerges from the bathroom in her swim wear.

“I’m keeping it modest with my one piece,” she tells Whitney.

Jen’s body is defying both physics and lewdness laws in this attire and I am impressed.

The two women soak in the hot tub,

and Whitney explains to Jen that she’s planning a huge party for Justin’s 52nd birthday because she feels that he sacrificed so much to be with her.

Then Whitney and Jen re-litigate the Mary confrontation at Valter’s, but honestly, who cares?

I can tell you Mary doesn’t.  She’s too busy trying to find her way around her office/closet.

From somewhere in the designer rubble, Mary finds the shoes she plans to wear to Justin’s party:

Either Mary is getting a TERRIBLE edit or she’s a TERRIBLE person, because here’s what she says about Charlinda:

Then it’s time for Justin’s party, which starts with Justin doing vodka shots off his wife’s abdomen.

Then the guests load onto a party bus

until they arrive at some random Park City house

owned by some woman named Kathryn.

“She’s the queen of Sundance but don’t tell Lisa” Heather says to describe Kathryn, who I guess owns a venue?

The guests continue to party,

while Mary stands awkwardly in a corner,

until she decides to have it out with Jen. They go back and forth for a while:

until they sort of reconcile and move on.

The next day we find Meredith at her store.

Park City is located just outside of Salt Lake City and is the cultural hub of Utah,” Meredith says. I'm going to try and not get too worked up over this, but I need you to know that Meredith is lying. Park City is where old, rich people retire or venture capitalists move to get away from the bay.

In the store, Brooks is pulling clothes for his collection. Which as far as I can tell are just sweatpants with personalized washi tape.

Elsewhere in the city, Lisa is prepping another event.

She declines a call from her children and their babysitter,

and then explains her unique approach to parenting during the festival.

Heather and Whitney meet for a drink,

She thinks that the limits on alcohol are made to make it difficult for secret Mormon drinkers like herself to get a buzz on. I love the idea of the legislature gathering to address the Heather Gay problem and enacting punitive legislation to make it harder for her specifically to get drunk.

Honestly the more I think about this, the more I believe this actually happened.

Heather asks Whitney about her marriage,

and is heartbroken to hear that there are humans in happy relationships.

Heather says that she deeply regrets her life choices, children aside, and that she feels like she’ll never find love.

Whitney tells her to stop making excuses. And put herself out here. And that's a good friend move.

The Shah squad is prepping for yet another soiree,

Jen’s cousin is a documentary filmmaker, and the VIP premiere of his new film is at her home.

The guests watch the film from the worst possible angles,

and then return to mingling. Jen encourages a crew member to approach Heather,

and after some charming flirtation, the pair leave hand in hand.

Whitney says she wanted to say to Heather the thing many Mormon parents say to their children, which is a joke maybe three people will understand.

In the Marks home there’s some light panicking as Brooks asks Meredith to call the fashion show coordinator and tell her he’s going to be late.

Then the tension quickly ratchets up as a mysterious alarm sounds

and a very anxious Brooks asks his mom over and over if she’s cooking.

Then water seeps on to the carpet from an overflowing toilet

and the alarm continues to blare,

and the dog poops.

And by the time the scene ends I wish I was watching Uncut Gems which seems relaxing in comparison.

But the Marks family eventually makes it to the venue.

and Brooks waxes philosophical on his rise to fame.

Whitney is also at the venue, prepping to walk as a model in another collection.

After a joke about not tripping on the steps and a maniacal laugh from Meredith that I personally believe was edited to last twice its actual length, Meredith tells Whitney that she wishes Seth could be there for the show. The implication is that Meredith told him not to come.

and then the guilt really hits Meredith.

Which is hard and sad, but what the frick is going on with this drowning bridal look?

I'll be back in a couple weeks to dive more into these insane outfits and the Sundance fallout. Until then, have a happy holiday! And check out our audio recaps of the RHOSLC episodes on The Green Room, and subscribe to our newsletter to get these recaps and other Hive Mind content in your inbox weekly.