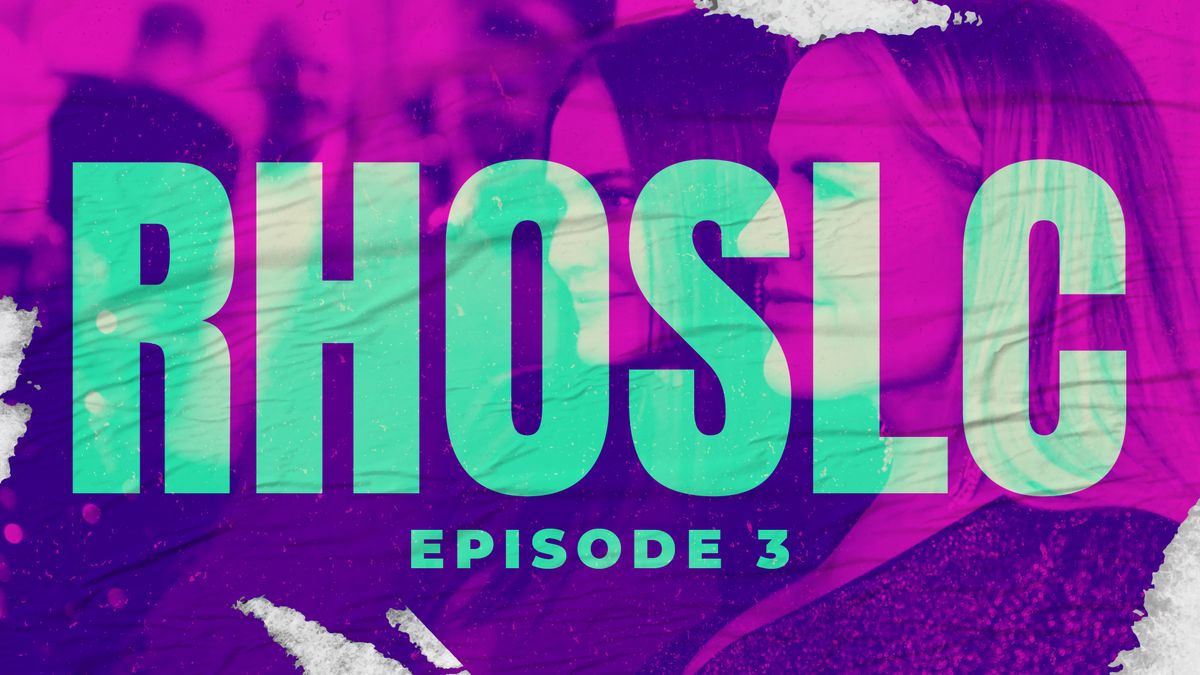 “John, I need a Diet Coke so badly,” Lisa Barlow says to her husband as the two drive around Draper to open episode 3. They're quizzing their youngest son Henry on the Ten Commandments.

In Park City, Meredith and Brooks are getting either warm or cool sculpted.

Whitney Rose walks into the small bar I drive past often due to its proximity to the best Nordstrom in the valley.

She and her sister? Twin? Bizarre-o Whitney? Droid?

are greeted by a handlebar-mustached man.

Whitney and Whitney’s evil clone explain to the man they are hoping to hold an event in the space. Then they engage in some kind of unnecessary prohibition speak.

"What kind of event?” mustached proprietor asks. “Something a little wet, not so dry,” Whitney responds, and Mustache opens a back door to reveal an event space with a bar.

Elsewhere, Heather is planning an event of her own — a baby shower for her five pregnant employees. Instead of getting these employees anything they will actually need or use in raising a child, she has decided to gift them all miniature Range Rovers.

Heather says, “We are successful Mormons based on how we raise our children and how happy we keep our husband and how perfect our family is or appears.” Currently all three of my children are holding an iPad, and I just told my husband that if he doesn’t plan on coming home with a Maverik Diet Coke for me, he shouldn’t come home at all. So you can go ahead and call me a failure.

Also, Heather, if you’re trying to reject the notion of perfectionism, why are you requiring the shower guests to wear white and giving the new mothers a useless status symbol that will just take up space?

Heather and her employees are busy getting everything ready for the shower, when for some reason, Jen Shah shows up in what I assume are the least seasonally appropriate shoes she owns.

Her aunt escorts her through the snow to Heather’s door. Whether or not this is the same aunt who had the double amputation that ultimately led to the hospital smell throw down is undetermined.

Then another random woman in hilarious sunglasses shows up to help.

The ladies  are talking gift bow size and drinking wine,

when Heather starts talking about her divorce. She says her life shut down when her husband left her, and that her sense of purpose, namely having the perfect Mormon family, was taken away from her.

“I chose [my ex] not because he was the love of my life, but because he was Mormon,” Heather says. And a real quick reminder: Heather went to BYU. A school swarming with Mormons. Tens of thousands of Mormons. It’s not like there was one Mormon left on the planet and Heather had no choice but to marry the one. She just chose to marry a VERY rich Mormon. A Mormon in the top tier of wealth. There are, admittedly, fewer of those.

Heather shares the shame she feels about her divorce with her friends.

Divorce is hard. And I have no doubt that it’s especially hard in a culture so focused on families. What I’m wondering though, is why we’re still talking so much about it like it just happened, when it was half a decade ago? I smell producer interference.

In her confessional, a producer asks Heather if she’s ever been in love,

and she says maybe once when she was 15. I really hope this is foreshadowing of an upcoming romance because Heather’s bummer story needs to turn around QUICK.

Back in Park City, Meredith has forgotten to attach the lid to her margarita blender,

so Brooks and Chloe, Meredith’s daughter who is home from college, walk into a margarita-splattered kitchen.

Chloe is home visiting for college, and she’s dressed for I don’t know...cocktail hour on a cruise?

“There’s no one I would rather be with than my children,” Meredith says.

Cue a knock on the door. It’s Jen Shah.

Plus two members of the Shah Squad.

Jen says the Shah Ski Chalet is too big and she gets lonely so she likes to pretend she’s part of other peoples’ families. Jen has two children of her own, and a dozen assistants who follow her everywhere, so it’s kind of a weird thing to say.

Not as weird as doing high kicks on someone else’s couch, though, which is what Jen does next:

Brooks, having seen Jen’s undercarriage, is not amused.

“You know your mom has fantastic high kicks,” Jen says and it’s just too much for the Marks children. So Brooks suddenly announces that he and Chloe have to go to Best Buy, which would be a believable excuse in 1996.

Meanwhile, at the Barlow Home, Lisa is teaching her elder son Jack how to drive. Lisa peppers Jack with driving tips the entire drive to 7-11, where they park,

and Lisa instructs Jack to go inside and get her a 44 oz Diet coke with easy ice and lemon, which just happens to be my exact order. Obviously with Covid, fresh lemon isn’t an option, but the lemon powder at Maverik is a pretty solid stand in.

Speaking of Maverik, just down the street from my neighborhood Mav is a swanky farm to table joint,

where Meredith and Mary meet for dinner.

I’d like to know the going rate for having your restaurant featured on Housewives, because I have to say, I think it’s a smart investment.

We get some shots of the interior:

And now I’m thinking TableX is the first place I’ll go once the vaccine hits my bloodstream. So good work, whoever is in charge of the TableX marketing spend.

While they wait for their cod to arrive, Meredith and Mary talk parenting and marriage.

Mary is dismayed that her son Robert has a girlfriend.

Then things get really dark when Mary starts talking about her marriage. Mary tells Meredith that because her marriage was arranged, she can never leave.

Mary says that her grandmother made it very clear that she wanted Mary to inherit everything when she died, including her husband.

“Don’t think it wasn’t weird, cause it was,” Mary says.

Then Mary reveals that she no longer speaks to her mom because her mom “threw a fit” when Mary married her mother’s widower. I’ll bet she did.

Then, IF YOU CAN BELIEVE IT, things get even more upsetting when a producer asks about Mary and Robert’s first sexual encounter.

“No. Thank goodness I was on my period,” Mary says, and then explains that she lied and told Robert her period lasted three weeks while she prayed to be okay with sharing a marital bed with her new husband. So, like, should we call the police?

The next day Meredith decides to make guacamole

And while she’s chopping onions, Brooks tells her that he absolutely does not approve of her friends and under no circumstance should she have a sleepover with Jen.

At Brooks' urging, Meredith decides to text Jen and cancel their planned sleepover. And that's that. Jen tells Meredith that she understands family is the most important thing and takes the cancellation in stride.

Next we find Mary in her kitchen, dressed like luxe Carol Baskin, lecturing her husband on how to properly light the stove.

“After Robert Senior and I married, I kind of had to get to know him,” Mary says, and then adds that she was surprised by how much she liked him after getting acquainted. “If I could pick a guy this is what I would pick,” she says.

Robert Junior makes his entrance and tells his parents that he in fact, does not want to go to boarding school in LA because that would mean being apart from his girlfriend.

In response, Mary acts as though she has just discovered that her Defense Against The Dark Arts teacher has been growing a face on the back of his head.

I assume Mary recovers from her shock in time to minister to her congregation at Faith Temple.

Which is good, because Whitney has brought her dad, and Meredith has brought yet another random friend who wants to be on TV.

Mary gives an impassioned sermon, mostly about her friends on the front row,

And the worshippers are moved to tears.

Then it’s time for the shower where Heather can project her issues, which should have been resolved through years of therapy, onto her pregnant employees.

“These girls think that they’re going to pop out these perfect Gerber babies, sleep train them in five minutes, and they’re going to have the picture perfect Instagram life,” Heather says. And I just really doubt that each of these five women has come to Heather and said those words.

Jen arrives with tinsel wrapped from hip to toe,

and while the party guests play the very stupid games we all have to play at showers,

The housewives gossip in a corner.

Jen asks if Mary is coming to Whitney’s party, and Whitney tells her she is. Jen is none too pleased to hear this.

Whitney explains to Jen that she likes Mary because her dad felt loved and supported for the first time in a long time at Mary’s church, and then makes the mistake of mentioning that Meredith also attended Mary’s church.

And that’s when Jen loses her mind.

“Everybody needs a Switzerland friend,” Heather says in her attempt to defend Meredith.  But Jen is not having it.

“This is a personal dig against me,” Jen says. To clarify, she means that Meredith having other friends is offensive to Jen personally. “Bitch, vote.” Jen says, meaning Meredith can be friends with Jen or friends with Mary, but not both. Weird that Whitney isn’t in trouble with Jen for going to the same church service Meredith attended.

Finally, it’s time for Whitney’s speakeasy shindig and the ladies get ready.

Though none quite so dramatically as Jen, who reveals her look for the Shah Squad.

And honestly, it’s a look worth revealing to a crowd.

I don’t even remember what this confessional from Whitney is about, I just need to show you 1. How different her hair looks (word is they had to shut down production when covid hit, then pick up later mid-pandemic, which explains the hair changes) and 2. How perilous her dress coverage seems to be:

Whitney and her crew arrive at Prohibition, and Whitney insists on speaking in a disturbing sex kitten voice that I think she thinks is 1920's.

Meredith shows up in nothing close to twenties garb:

Mary channels a discotech in Paris:

Lisa attaches a feather to her hair:

And Jen arrives with two assistants behind her, holding her train:

“Whitney definitely loves the stripper pole,” Lisa says as we watch a shirtless man dance around the room.

Meredith and Mary gab in the corner,

And Jen, who admits she had a few pre-party drinks, takes notice.

She responds in her usual understated way and says, “It’s like someone stuck a knife in my heart.”

All in all, this episode served as a bridge from last episode to what promises to be an explosive episode next week. If the Coming Up On RHOSLC is any indication, we’re in for a fiery confrontation. I can’t wait. But I’ll have to and so will you.

Until then, check out our audio recaps of the RHOSLC episodes on The Green Room, and subscribe to our newsletter to get these recaps and other Hive Mind content in your inbox weekly.

How Near To The Angels: A BYU Film Recap From 1956 That Will Make You Feel A Lot Of Things