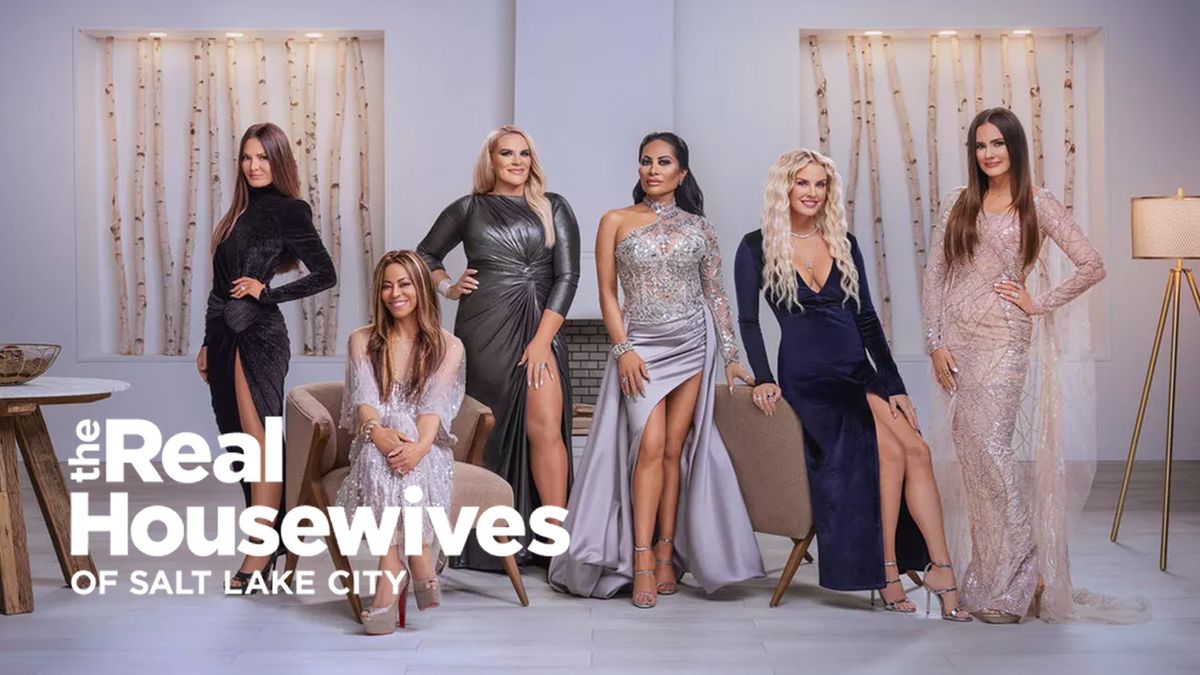 The Real Housewives Of Salt Lake trailer is here and it’s really something.

It begins with every woman explaining her religious affiliation. And honestly, as embarrassing as it is that the whole macguffin of this show seems to be “Mormons live here,” and as much as it makes me want to drive all the way to the nearest coastline, park my car, get out, and walk directly into the sea, I appreciate the producers for saving me time. I would have spent hours on social media trying to determine where these ladies fall on the Mormon spectrum had they not just come out and told me. That’s what we do here. We meet someone and immediately start trying to shake out what their deal is, church-wise. I'm not proud, but that's the way it is.

"I’m a purebred pioneer Mormon,” Heather says like someone was going to mistake her pedigree with that of a Mormondoodle.

“I’m Jewish and from Chicago,” Meredith says as though “from Chicago” is a faith.

“I’m actually Pentecostal,” Mary says and boy oh boy, we’ll get to that in a minute.

“We are Jewish by heritage, Mormon by choice,” Lisa says.

“It is a very big deal that I’m no longer Mormon,” Whitney adds.

And then finally, Jen says,  “I was raised Mormon but I’m converting to Islam. As-salamu alaykum, bitches,” which roughly translated means, “Peace be upon you, bitches.”

over footage of the one woman who just told us she has no connection to Mormonism holding a drink.

Then the narrator adds, “and doesn’t have sex.”

Which makes me think that someone on the Bravo team believes Mormons are like that religion/commune we learned about in US history who were in Virginia or Massachusetts and were all celibate and so they didn’t last more than a generation. We're not like that. Mormons are discouraged from having premarital sex, sure, but Utah has the highest number of children per family. So. Go ahead and put two-and-two together, which is not a euphemism, but should be.

This is all while Lizzo’s “Worship me” plays (it is a banger, but might as well just gone full on the nose with “Like a Prayer”) and title cards read:

And then, “If you don’t have money, connections, beauty, power, you haven’t got A PRAYER,” which is, mercifully, the last cringey, religious play on words before the back half of the trailer which is more standard Housewives stuff:

“Who’s friends with who in this circle?”

“Do you think you’re a home-wrecker?”

“Lisa accused me of being a swinger.”

And then the official premiere date:

Which gives us two exactly two months to study up on our six new best friends.

Thankfully Bravo has thrown us a bone and provided cast bios. Between those and my hours of “research,” I feel my knowledge of these women is already encyclopedic, and by the time November 11 rolls around, I’ll probably be on an FBI watch list.

Lisa is the sun around which the other housewives in this system orbit. She’s also emblematic of the type of Utah woman this show will feature- not very Utahn at all unless you count Park City as Utah, which no one does. This cast could easily swap with the cast of RHONY. They're the same kind of people, around the same age, with the same attitudes. These women just happen to live in Utah and have some church baggage. And while I feel a little misrepresented, I’m also relieved no one from my high school or my home ward is on this show. That felt like a possibility for a hot minute and it was terrifying.

To recap: Mary married her grandmother’s second husband, the man who was formerly her grandfather, after he definitely didn’t have his wife/Mary’s grandmother murdered. Her marriage is described as a caveat for taking over the family business and running an empire of churches. I'm concerned.

It took a night of googling, cross checking social media platforms, and texting everyone I know, but with the help of one particularly skilled sleuth, I can now tell you the Mormon royalty to whom Heather was married: Billy Gay III. Billy’s uncle is Bob Gay of Huntsman Gay Global Capital (HGGC) a private equity firm whose founding partners include Jon Huntsman Senior and Steve Young. Prior to founding HGGC, Gay managed Bain Capital, the brainchild of Mitt Romney.  (The story of Romney shutting down Bain and sending employees to look for Gay’s missing daughter in New York shows just how close the two are).

Billy’s father Bill ran Neutraceutical Corp. which was acquired by HGGC in 2017 for $446 million.

I would love to know Heather's definition of a "good Mormon gone bad." Are we talking double-piercing bad or running a brothel bad? The margin of error here is wide.

A Meredith Marks bracelet will run you anywhere from $850 to $16,000, which is exactly the kind of pricing I expect in a Park City boutique. A friend and I went shopping in Park City thinking we would add some variety to our almost exclusively Madewell wardrobes and we spent the day saying, “I’m sorry, this cowhide belt is how much?”

Meredith looks a little terrified to be here and I'm wondering how she got roped into this and if it was a business decision she now regrets.

“Mormon royalty” is a term that is being thrown around an awful lot here. I did a fair amount of digging, even went all the way to the bottom of the insta grid, but couldn’t find much about the Lesh's (her father’s side) or the Robinson's (her mother’s side). In truth I think that if your family has been part of the church for more than two generations and has a significant amount of money, at some point someone has referred to you as Mormon Royalty and Whitney probably latched onto the title. But I’m open to intel if anyone has any.

From what I can tell, her father who needs her parenting (?) is about the same age as her husband, a higher up at an MLM, so that should be a fun dynamic to watch. I assume the swinger accusations are a nothing burger, but I’ve been delightfully surprised before by a reality tv trailer delivering on its promises. Colton did ultimately jump that fence.

The thing about botox is that you have to give it a minute after getting it done before having any photographs taken or you'll look full Disney evil stepmother. This is a lesson I’ve learned the hard way, and I suspect Jen has now, too.

There’s a lot in this bio that I’d rather not touch. This isn’t that kind of writeup. But I will get messy and ask, if it’s so important to Jen that everyone in Utah know she’s the best host, why have I never been invited over? I would like to know what I'm up against as compete for the title of Utah's Best Host. What’s fun about dinners at my house is that everyone gets a different kind of glass. Because I have no more than three of any one kind. If you're really lucky, you'll get a cup that came with a kid's meal at Chili's. Beat that, Jen.

I keep rewatching the trailer and rereading these bios, hoping somehow they will magically transform into an episode of RHOSLC I can watch right now. Because I cannot wait to watch this series and get to know these women and share it with all of you.

My calling in life has never felt more clear than it did that day last winter when this show was announced. I've been preparing a long time for this. My whole life, really. And recapping each episode is a responsibility I do not take lightly. I promise to leave no detail untouched, no plot-line unexplored, no outfit uncommented on.