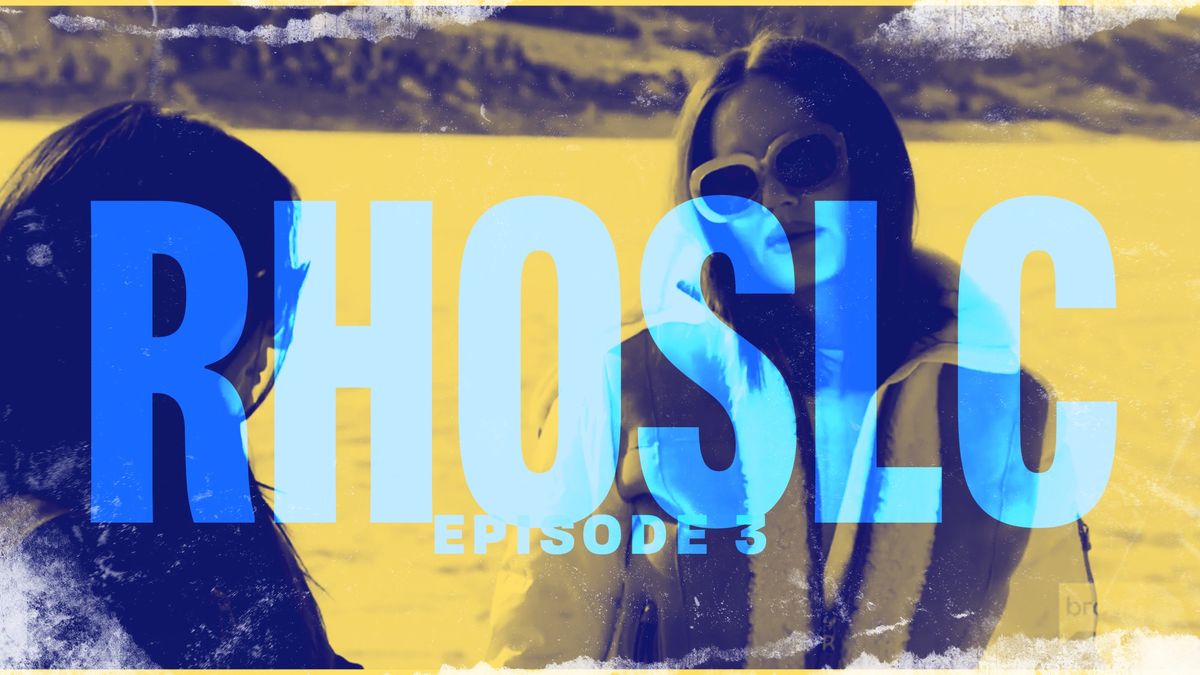 This week on RHOSLC, we’ve run into a bit of a problem that starts with J and ends with -en. Jen is like the A-bomb of Housewives. Anytime she’s a part of a scene or conversation, she destroys everyone and everything in her wake. She’s actually not very fun to write about because she’s like a caricature of a Housewife.

I’m curious to see how Bravo handles Jen as a cast member and her forthcoming legal issues, but in the meantime, we’re on the slopes where Jen and Lisa go ski biking and talk about Jen’s plan to get the gang back together for ice fishing.

As a prerequisite, she needs everyone’s height, weight, eye color, hair color, and full name. Why Jen needs more info for ice fishing than to go through TSA, I do not know. But the feds might.

In Salt Lake, Mary and Robert Jr. are out for lunch. Mary speaks to her son as if she’s a distant relative meeting him for the first time. She claims, “We have an amazing bond and we can talk about anything.” She tries really hard to convince us of this because she’s not a regular mom. She’s a cool mom.

The close bond between Mary and her son becomes more evident when she brings up that he wants to move out.

She wants him to go to Army and she talks about it like Buster Bluth.

For someone who doesn’t want to release their son from the evil spell that keeps him in his Gucci-themed bedroom for the rest of eternity, she seems eager for him to leave.

Next, we’re at Jennie’s house where Karlyn is doing some heavy lifting with her cuteness to keep Jennie relevant. I’m worried about Jennie’s future as a Housewife because we’re watching Karlyn do science experiments. That is not why I watch this show, I can do that at my own house, thank you very much.

Duy and Jennie sit down to talk about Duy wanting to have more children. We find out that Jennie has had nine miscarriages and three C-sections and I had fire coming out of my eyeballs, singeing a hole into my television as he was pushing Jennie on this.

She explains that it would be dangerous for her to have more children, and just as importantly, she doesn’t want to. That’s literally all Duy should need to hear to never say a word about it again. I don’t like this storyline because this show is supposed to be fun and I don’t want to have to hate Jennie’s husband.

At Heather’s house, we learn that Heather is a dance mom. I didn’t realize this, but should have spiritually known it because, in many ways, she is the most Salt Lake of the RHOSLC. Heather wants her oldest daughter Ashley to go to a party school and live the college life she didn't have at BYU.

Heather explains that until a few years ago, she raised her kids “militantly Mormon,” including sending her oldest daughter on trek. For one, I’m not about any militant form of parenting; and two, I really don’t want to have a trek conversation here, but as a Mormon recapping this stupid show, I feel it my duty.

Trek is a youth activity that happens every few years where teenagers wear pioneer-style clothing, pull handcarts, and recreate the Mormon pioneer trek over a few days. There are weird things in every faith tradition, and this is definitely something we can get rid of. I did not go on trek as a teenager, but attended as an adult leader, and I hated it more than childbirth.

Instead, let’s send the kids on a three-day backpacking trip and call it a day. Outside of Utah, we Mormons have tried very hard to explain to our friends that we’re just your everyday Christians. And we’re not doing a good job of this by trekking through humid, tick-infested state parks in period clothing amongst The Normals.

ANYWAY. Heather’s other daughters would like to attend church again and Heather is firm in her boundaries with church, but is willing to support her daughters in whatever they choose. Heather is a good mom.

Back in Park City, we’re at Meredith’s where she’s hosting a designer showcase with her friends “who love and appreciate fashion.” Apparently, that means Mary Cosby because she has to occasionally leave her house to attend some events lest she become one with the mannequins in her closet.

The producers ask Mary what she thinks of Meredith’s style and she short circuits: “Um, Meredith’s style is Meredith. Meredith Marks.” Mary trying not to shit on Meredith’s fashion is a delicious display of Housewife delusion. Mary, of all people, who dresses like she put on everything from the discard pile in a TJ Maxx dressing room.

Stranger still, Meredith reveals that Mary and Brooks have struck up an unlikely friendship because they’ve both been targeted by Jen Shah.

Meredith is still rightfully upset with Jen for speculation on Brooks’s sexuality, and I had to check if Mercury was in retrograde or something, because for a second Mary made perfect sense. She asks Meredith why she hadn’t just talked to Jen about it. Meredith acts like she had never considered this before—like she’s not a Real Housewife. Meredith, this is the price you must pay.

I hate to keep repeating myself every week, but this was one of the strangest things I’ve ever seen. It’s not my fault Mary keeps outdoing herself. Meredith, who, as a robot, doesn’t have bodily functions, doesn’t quite know how to react.

I’m not above a little blue humor, but this franchise was once about wish fulfillment, for heaven’s sake. Opulence. Glamour. Now Mary is telling Brooks Marks to shut up so she can toot. What have we become?

Finally we arrive at the sting—the frozen lake upon which our Housewives will pretend to care about ice fishing for 20 minutes.

Jen—wearing a tiara atop her baseball cap—hikes out to the middle of the lake. She’s greeted by ice fishing guides who immediately run like all hell hath broken loose because they had a fish on the line. I didn’t know there was so much cardio involved in ice fishing.

On their way, Whitney tells Heather—team Bad Weather, the stupidest hype name of all time—how she doesn’t want to see Jen and Lisa.

She wears a life jacket to “break the ice” in reference to Jen threatening to drown her last season. For a moment it seemed she had overplayed her cards and was regretting the bad joke and bad bucket hat:

But Jen took it well:

Jen tells us that Mary texted and didn’t want to come. We gotta have Mary start attending more of these group events. Inconceivably, she has signed a contract to appear on our televisions, and so here we are—but Mary-less.

Mary is like mayonnaise. (Maryonnaise?) You don’t think you want mayo, but without it there’s something missing. When we have Mary, I don’t necessarily want her there. But when she’s absent, I don’t miss her per se—but I find we’re missing a little somethin somethin.

After the ladies catch a fish or two, they spot a beautiful creature, sponsored by Boston Dynamics, sauntering toward them. She’s incredibly lifelike. It’s Meredith, who is not pleased to be exerting any effort to be there.

Jen’s crew surrounds her to reapply her makeup and give a pep talk that also works as alternate title for the Real Housewives:

Then the ice cracks and Whitney falls into the frozen water!!!!

Just kidding, they have a trout on the line.

After trout shenanigans, we get to the business end of things and Jen and Meredith sit on camping chairs to hash out their issues. Meredith explains that Jen is pressuring Brooks to talk about his sexuality before he’s ready. Jen escalates the situation when she says she has no idea what Meredith is talking about. Meredith goes from zero to sixty and is “done” faster than you can say “Brooks Marks tracksuit.”

Meredith is so mad her sunglasses fly off her face and Lisa does a bad job de-escalating:

In an act of mediation [and to get more screen time], Jennie gets involved in an argument between two people who are relative strangers to her:

Clearly, Meredith’s family is a trigger for her but Jen can’t see that and she turns the argument to be about her own children, which is just basement-level emotional intelligence. Jen then brings up her vagina again, which is strangely becoming her go-to move.

Meredith says: “I don’t think that Jen is capable of seeing beyond herself. It’s always ‘What about me?’” And I think Meredith is right.

Jen and Meredith seem to be at an impasse and if our lovely cast can’t be at group events together, then what are we even doing here? I’m going to need Mary to leave her haunted mansion, Jen to take accountability for herself and her social media, and for Meredith to be more willing to engage with her contracted friends.

At the end of the episode we’re left with a To Be Continued, so that’s where I’ll be waiting till next week—on a frozen lake that seems to be even icier than when our Housewives arrived.