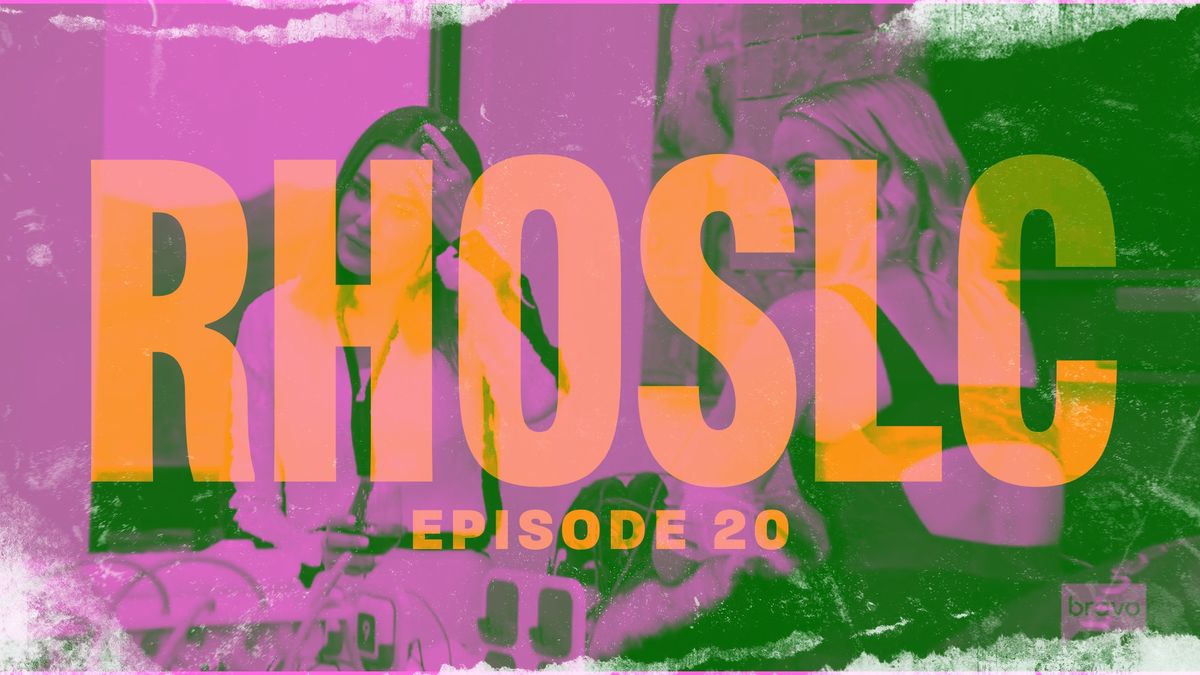 We ended last episode at the Cinco de Screamo dinner:

Lisa was triggered by a seemingly innocuous, albeit dismissive, comment from Meredith that led to this hot mic meltdown:

Jennie comes to “check on Lisa” AKA get a camera in there. Lisa says she doesn’t want to see Jennie and then starts yelling at her too:

But *someone’s* silence is deafening:

Lisa rants, “You all have a problem with everything, but nobody f---ing talks about it. I brought it all up. I took it for all of you, and you all just sat there. You guys do not know how to show up.” This is not about friendship. This is a show within a show. Lisa is pissed because she’s driving the storylines and taking all the flack for it:

She’s sacrificed her friendship with Meredith for the sake of the show and she feels the rest of the ladies aren’t pulling their narrative weight.

Meanwhile, Mary has a hot mic moment of her own:

A very drunk Whitney stupidly decides that to defend Lisa’s honor, she must confront Meredith about whether her father’s memorial was fake or not. WHY. This is mean and in horrible taste, but Whitney can’t help but follow the scent of a conspiracy theory. Except she’s the only one who smells it. And you know what they say about first smelt, first dealt.

Meredith sneers, “I don’t believe that you haven’t talked to your father, Whitney. Why don’t I take something painful to you and just rip the scab off and tell you no one believes you?” But, famously, analogies don’t work on Housewives. Whitney says:

Things are not going well. Whitney says, “I wanted to know ‘cause everyone’s talking about it.” (They were not.) She asks again when Meredith’s father’s memorial was and when Meredith doesn’t give a clear answer Whitney retorts:

Meredith turns around on her barstool to end the conversation and Whitney eye rolls and walks away past Mary, who apparently has been there the whole time. Mary takes great pleasure in Whitney’s rejection. It is hilarious, villainous, and exactly what I’ll be missing when she’s gone next season:

Meredith is exhausted. Listen, I’m exhausted from watching these women, let alone being one of them. Mary tries to console her:

Whitney stomps upstairs where the rest of the Housewives are hiding. She demands Jen shut the door to make sure they’re alone. She performs a dramatic retelling of her kitchen confrontation:

She looks undeniably gleeful. It’s embarrassing because it’s clear she thinks she created a moment for herself:

Downstairs, Meredith decides she’s not going to sit idly by:

She’s full of the silent vengeance only a cyborg can summon. Back upstairs, the ladies are unaware of what’s coming their way:

Meredith marches in and demands to know who was speculating about her father’s memorial. Whitney, feeling fresh with a newly empty bladder, says, “Everyone.”

They immediately throw Lisa under the bus. In a fury, Lisa flies in to come to her own defense:

Meredith asks the group again who was questioning the memorial:

Whitney and Heather ask her again if she had a memorial for her father or not. Heather says, “I thought all of this was just a miscommunication, but the way she’s reacting makes it seem like she’s lying about even having a memorial.” This is not a sentiment I can get behind, but it is annoying that Meredith continues to be so elusive.

Meredith storms out muttering, “These aren’t my friends.” Then the eye of hurricane Bad Weather turns to Mary:

Whitney (again, she’s very drunk) yells that Meredith needs her friend Mary. She says, “Why aren’t you in there with us, Mary?” Disgusted, Mary says:

Lisa says to Mary, “Why do you even come though, if you don’t care about any of us?” Or, why are you even filming this reality television show with us? Mary says it all:

The next morning, Heather and Lisa unpack what happened. Heather says, “[Meredith] came under fire last night, but nothing was resolved . . . I feel like Meredith didn’t wanna say the date because she doesn’t wanna be caught in a lie.” She continues, “I do not understand what connects Mary and Meredith.”

Heather says they “have not held Mary to the fire . . . even though she’s openly and aggressively cruel.” I don’t love calling the only Black woman on the cast “aggressive,” but Mary is 100% difficult and it would be so frustrating to interact with her when she’s so unwilling to participate, and when she does, she’s petty and mean.

Lisa and Heather hug and Lisa says she didn’t expect to be bonding with Heather and Whitney on this trip. She says there’s a shift in dynamics because of Meredith and Mary’s bizarre “friendship.”

We cut to a breakfast table with the three people I’d least like to share a meal with:

Meredith is riding home on the Sprinter van with the rest of the ladies so they can’t talk behind her back. It comes as no surprise that Mary is not. She’s given up the ghost, figuratively and Bravo-ly speaking. She tells Meredith:

It’s three days later and the ladies are back home. Meredith is in yet another shiny pantsuit. Seth says she needs Reiki energy healing to get “de-skunked” from the trip’s bad energy:

Elsewhere, Jen meets with her attorney. She asks if he’s talked with Stu or his legal team: “Cause right now we’re fighting this together, right?” Right?? …RIGHT??!! He says, “We’re not opposed to each other at this point.” At this point. Gulp. He says, “If he takes a deal, he may testify against you.” Dear reader: he sure did take that deal.

At Lisa’s, she’s secured herself a raclette grill out of spite:

Young Jack asks his mom how her Zion trip was and she immediately changes the subject:

She excuses the boys so she and John talk shop.

Lisa explains the “little bit of tension” (read: utter hatred) between her and Meredith. John says, “I know it’s two ways, but from your side, is there anything that you can do?” Lisa says she’s going to remove herself from Jen and Meredith’s issues. The Diet Coke can chimes in:

In Salt Lake, Mary has invited Jen to her church to worship...Mary.

Now, I haven’t exactly been a Mary apologist, but I wasn’t so sure about the cult leader allegations. I believed Mary when she said her congregation wasn’t worshiping her. But here’s some things one woman said: “You are my perfect love.” “You are the perfect friend.” “You are a master of positivity.” Even Mary was cringing at this one:

I imagine this is not what Mary wanted documented on camera. The congregant goes on! “You are the facsimile of God.” Mary tries to play down the whole worshipping thing:

She tries to do some damage control:

Even Jen is feeling uncomfortable, and this is a woman who appears to be unbothered by her federal indictment and probable jail time:

In Park City, Meredith has invited Whitney and Heather to do some sort of cool sculpting torture treatment. More importantly, she’s debuting her third blazer this episode:

On their way Whitney tells Heather that in Zion Meredith asked her, “Is your father really an addict?” Which is not what she said, and she conveniently forgot/didn’t understand that this was AN ANALOGY. I repeat—rhetorical devices don’t work on Housewives.

Heather says  Meredith didn't mention there was an issue between her and Whitney and—you’ll never believe what Whitney says:

But this time she’s not wrong. Because this is a cover up. It’s an ad disguised as a hangout:

And Meredith is conveniently using Whitney and Heather being attached to machines to corner them about her father’s memorial:

Heather says all they were trying to do is “pave the way for you to clear it up because the shit people were saying was not fair.” Heather. Girl. You and Whitney were the only ones saying shit.

Lisa didn’t ask Meredith exactly when her father’s memorial was and she misunderstood. That’s it. Meredith takes the bait because she’s looking for an excuse to not be friends with Lisa anymore:

Bad Weather orchestrated this SET UP to make Lisa look bad and keep themselves in the clear. The set-upped become the setter uppers. What’s extra shady is the way Heather played Lisa to make her think they were friends. Or maybe Heather is just a people pleaser. Or maybe both.

Meredith says, “The things you’re saying are not things that a friend of ten years does.” But I’d say the same could be said of Meredith—a friend of ten years believes the best of their friend, not the worst. Something she said earlier that the ladies should be doing of her.

Finally, I hear the beautiful words I’ve been waiting to hear for WEEKS:

There’s no episode next week for Super Bowl purposes (Who Dey?!), but we’ll be back in two weeks for our final episode and final recap of the season. Until then, don’t miss Meg and Emily on Hive Mind’s weekly RHOSLC recap from The Beehive.