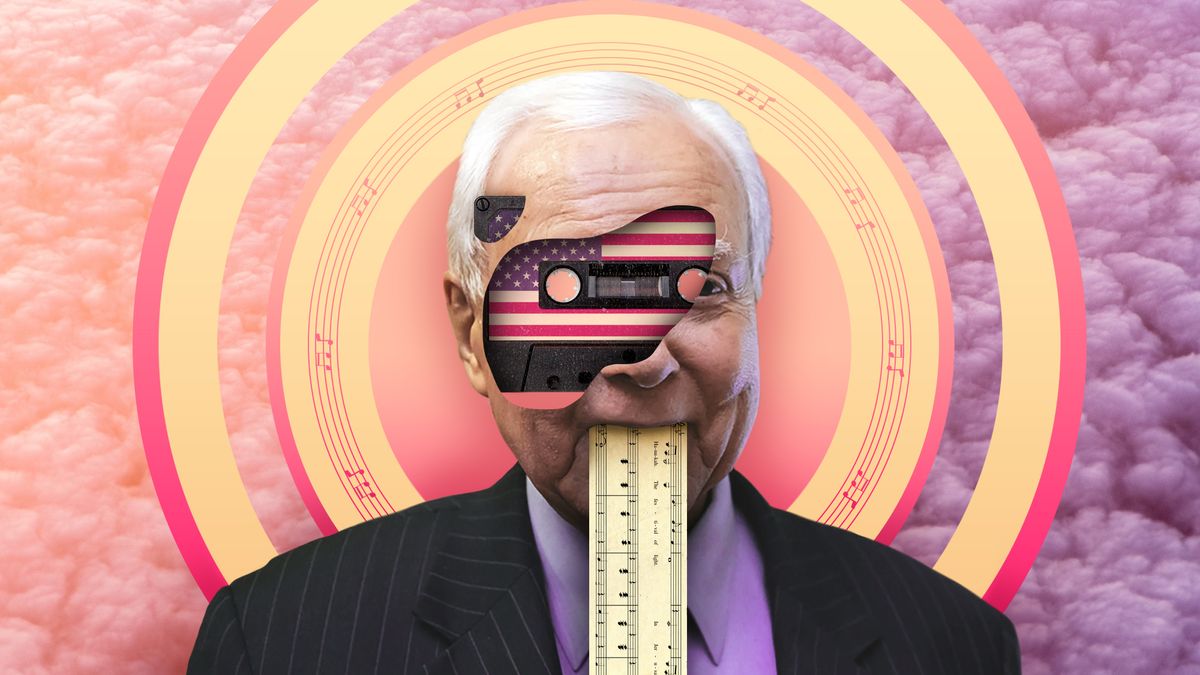 The last time I was part of a Mormon congregation’s choir was in 2007. It was a young adult ward and the choir was led by an iconically sarcastic chorister, who is now in the Tabernacle Choir. He used to end every practice session by holding up a large picture of Janice Kapp Perry and saying in an impressively-earnest-sounding voice, “We all came here for different reasons, but we stayed because of Janice.”

Although it wasn’t meant to be mean-spirited, and the Notorious JKP (please let this catch on) seems like a truly lovely person, the joke killed every time.  It was a hit because the majority of us had grown up with the works of Janice Kapp Perry downloaded into our forming brains.

She had written volumes of gospel songs for Mormon children, so ubiquitously sung in our state in the 80s and 90s that if you walked out onto a Salt Lake City street and yelled the words “AS SISTERS IN ZION” the throngs would almost subconsciously mumble in unison “ . . . we’ll all work together.”

She has written so many numbers Deseret Book has an album available called “70 Favorite Children’s Songs By Janice Kapp Perry.”

They narrowed it down.

In 2016 I ordered a copy of Janice Kapp Perry’s Parallel Universe as a Christmas present for a childhood friend who left Mormondom long ago. I did it mostly for the album cover photo.

When his husband, who has never lived in Utah, came home from work the day the CD arrived and saw it sitting out on the kitchen table, he reportedly said “What the hell is this and why is it in my house?”

Now I get two emails a year reminding me I might also like other Notorious JKP offerings. I have not opted out of these emails because they remind me of the above photo on a biannual basis and that makes me happy.

Janice Kapp Perry is only one of many Utah musicians responsible for making our great state the true leader in popular music.

Take Michael McLean, for example. I once had a college roommate who unironically purchased a CD produced by McLean. It was an experimental album featuring southern-Baptist-style gospel music. On the back of the album cover there was a quote: “Michael McLean is like an inside-out Oreo: white on the outside, but black on the inside!”

Every third year my parents, in a half sarcastic/half sincere gesture, buy tickets for the entire family to Michael McLean’s Christmas concert, The Forgotten Carols, where we are confronted with such musical offerings as “Mary Let Me Hold Her Baaaaaaaaaby” and “I CRYYYYYYYY the day that I take the tree down, cause I want the SEAson to LAAAAAST all year round!”

For those unfamiliar, McLean’s Christmas show is a musical featuring biblical characters who didn’t get their story told in the Bible. Like the Innkeeper, who reportedly was immediately regretful of his decision to turn J and M away, and so now takes the stage annually to invite the audience to “Let Him In.”

McLean ends every show by asking the audience to link arms with their neighbors and sing a nearly-never-ending swaying round of “We Can Be Together Forever Someday.” Relationships in my family have been severely damaged during our six-way fights every three years about who has to sit on the ends next to strangers during the show.

My boyfriend, who is new to Utah, will be attending this concert with me and my family this month for our last Christmas together.

There’s also the time the Utah State Legislature reinvented hip hop with its 2018 release of “Fresh Prints of Bills Here,” hearkening back to Will Smith’s 90s sitcom and intro rap by nearly the same name.

Utah’s re-imagining begins with the speaker of the house, with a colleague's assist, exclaiming “Noooooow this is a story all about how our bills get flipped into a law.” And it only gets more inspiring from there. By the end of the production, there isn’t even an attempt to jam the correct number of syllables into any given measure.

But this article isn’t about Janice Kapp Perry or Michael McLean or those sex gods on Capitol Hill. This article is about the greatest musician of our time, truly the Susan Boyle of the Mountain West, Orrin Grant Hatch.

Everyone knows him for his songwriting prowess, but most people are not aware he has also served as a United States senator since just before the Spanish-American War.

Senator Hatch hasn’t let a little thing like Congress get in the way of his illustrious musical career, during which he has extensively collaborated with the Notorious JKP in a very John Lennon/Paul McCartney kind of way.

Over the years, Hatch has written dozens of songs, mostly gospel or America! themed (and frankly, if you’re a real American, what’s the difference?). In fact, Wikipedia reports that to date he “has earned over $10,000 as an LDS music recording artist.”

For perspective, I sold 36 coupon books and raised over $500 in the fourth grade for a school fundraiser, so Hatch’s musical career has been twenty times more successful than that.

Hatch’s music history, like his current job, goes back for decades. “In the early 1970s,” Wikipedia claims, “he was the band manager for a Mormon-themed folk group called The Free Agency.”

I have only been truly mad two times in my life. The first was when my parents made me watch the entirety of The Horse Whisperer in 1998 as a punishment for being 14, and the second was just now realizing that I somehow lived for 34 years without knowing there was a Mormon-genre musical group in Utah in the 1970s managed by Orrin Hatch  called “The Free Agency.”

“The Free Agency was made up of members of an earlier Mormon group called the Sons of Mosiah . . . .”

WIKIPEDIA IS RUINING MY DAY.

Since those early days, Hatch has filled our homes, and our hearts, with the sounds of heaven. It would be impossible to pay sufficient tribute to his entire body of work due to the space limitations inherent in the internet’s capacity, so instead, today we honor only Orrin Hatch’s top five greatest songs.

Coming in at number 5, Hatch offers a bellowing lament about receiving:

Bad news every morning just like the day before.

His opening lines truly demonstrate, right from the beginning, that Hatch, undeniably, unprecedentedly, is able to rhyme words with other words. So mesmerizing are the rhythmic opening beats that one almost forgets to wonder the query he next poses:

Where this country’s headin’, Lord I wish I knew.

But most of all I need to know what can one man do!

Fortunately, unlike he’s wont to do in his elected position, Senator Hatch has no intention to leave us without a plan to resolve the above quandary:

I’m askin’ the Lord up above, shower us with his love!

4.  The Eight Days of Hanukah

Move over, inside-out Oreo! Those who might have assumed that Hatch’s talents only lend themselves to masterfully turn America and Mormonism into art would be mistaken. As an ambassador to Jewish people everywhere, the Senator put pen to paper and wrote such words as “dreidel” and “gimel” and “Latkes” and “kosher,” in no particular order.

No, the song has not brought everlasting peace to the Jewish people, but I know of nothing that has come closer.

An American Rainbow is arguably Orrin’s most important tribute to the LGBTQ community.  In it, he acknowledges the soul-crushing desperation of an abused group, vowing to wield his substantial influence to lighten that group’s burden and ease the pain caused by his generation’s ignorance and apathy.

Our American rainbow is much the same,

as a heavenly rainbow from sun and rain.

We may see all the colors in different tones,

but they glow with the beauty that’s all their own.

Then there’s very helpful and detailed instructions about how to draw a rainbow contained in the second verse. As it turns out, there are multiple colors involved. More than you might have predicted.

2.  The Answer’s Not in Washington

It’s possibly his most ironic offering. As this weepy ballad reminds us,

We read it in the headlines.

People breaking all the rules

that keep our country free.

Hatch sets the stage, noting the problems in our great country that government exists to address. But not so fast.

We pay our taxes and then expect a miracle to come.

We legislate, we demonstrate, but when is all said and done:

The answer’s not in Washington where bills and laws are passed!

It’s in the hearts of honest men who have the will to act!

The answer’s in the churches, in the homes, and in our schools

where families are taught to love and live the golden rule!

You try listening to that song without becoming sexually attracted to Benjamin Franklin.

Like all of Hatch’s works, this creation deserves an uninterrupted listen in its entirety.

Look. It’s almost impossible to choose Orrin Hatch’s greatest song (and in turn, necessarily the greatest song of all time). But surely no work is more deserving of the honor than “America Rocks!”

Here, Hatch displays his unmatched ability to incorporate the youth lingo of the day into inspiring near-rhymes such as

Only to turn around and issue what is widely considered to be his most controversial lyric,

I mean it’s like right there at the top.

How has there not been a call to replace “The Star-Spangled Banner”? I want you to look me in the eye and tell me that every sporting event would not be improved if it was kicked off by a live production of this song. Tell me right now you do not want to watch Beyoncé perform this at the Super Bowl. If you can honestly say you would not be more proud of America if you heard an instrumental version of this played any time our great country won an Olympic medal, I will shut up and go away.

Senator Hatch, we bow to you. I mean, you’re right like right there at the top.